The wall crawlers get added into the Murderworld mayhem

Murderworld Avengers opened up a world of madness for people trying to get rich quickly. Unfortunately, this didn’t pan out too well for many of the contestants. For those who survived, the journey and battle were not close to being over. This week gives us Murderworld Spider-Man from the same writing duo of Jim Zub and Ray Fawkes. Joining them for this issue are Farid Karami on pencils, Chris Sotomayor on colors, and Cory Petit on letters.

With this entry into the Murderworld saga, Zub and Fawkes use everyone’s favorite web slingers instead of the Avengers. My one gripe about the writing is that we don’t really get enough of the spiders. Similar to the Avengers in the last issue, the big Marvel characters only appear on a few pages and then disappear. What Zub and Fawkes do well is they continue to develop new characters in the story. Last issue the main character was shockingly killed off, this issue they build up some of the side characters from Murderworld Avengers. Eden Abraha was used last issue, but for Murderworld Spider-Man, she is our point of view character. Zub and Fawkes build Eden up through some flashback pages. She was an MMA fighter who took things too far. This issue also introduces us to a couple of new characters who also have some good potential to become relevant later in the series. As always, Zub and Fawkes write Arcade brilliantly. The make him funny and sadistic, but you can’t help but like him. Murderworld Spider-Man is a fun issue that doesn’t let the reader feel safe as characters are picked off one by one. Another great showing for Zub and Fawkes. 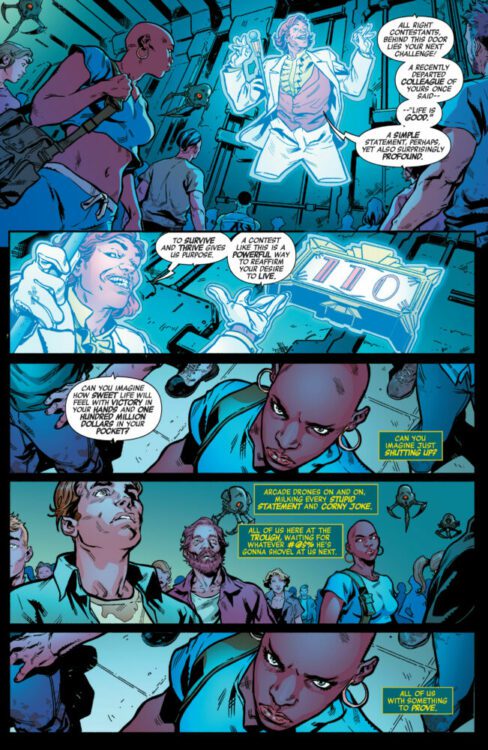 The pencils are done by Farid Karami for this issue. Karami’s pencils are very clear and easy to go panel to panel with. Action sequences look awesome as the survivors try to take down an A.I. Miles Morales. One of the things Karami needed to nail was the facial expressions on Arcade. He’s a character that is very excitable and visually makes a lot of different looks. Karami succeeds in giving us several looks for Arcade as he is thinking seriously at one point to smiling with glee as contestants die off at the hands of his spiders. Karami also does good work establishing the layouts of new areas. As the survivors move on, they enter a blizzard. Karami paints a gorgeous snowy backdrop with covered mountains in the background. The pencils stepped up to the plate to make this issue more enjoyable and easy on the eyes.

The colors are handled by Chris Sotomayor. An issue like this uses several different background colors as our contestants travel through the unknown. Sotomayor will use a darker blue with light whites as the survivors travel through a winter landscape. Earlier in the issue, skies were clear and blue as they were attacked by Spider-Man and his crew. The pages where the Spider-Man crew arrive are colored vibrantly by Sotomayor. The red from Spider-Woman is just the right tone, and Sotomayor also gives us excellent shading as well.

The letters by Cory Petit are good. As the spiders attack, Petit uses several well-placed “THWIP” effects. These are in the upper left-hand corner of the page, and allows the action be seen. Word balloons are placed in the perfect spot so they don’t interfere with the pencils. Petit makes effective use of sound effects as well. A “CRUNCH” is placed in between a contestant’s feet as he is yanked up by a spider web. Petit is easily one of the better letterers in the comic book industry. His work continues to evole and engage readers. 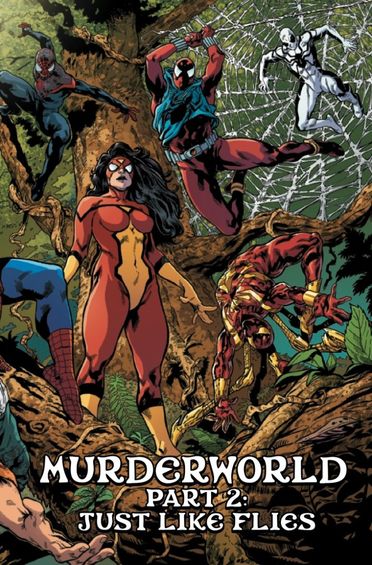 Murderworld Spider-Man is another fun entry into the Murderworld series. Zub and Fawkes continue to offer solid character development with an unpredictable story.REVIEW: MURDERWORLD SPIDER-MAN #1 Is Web Slinging Fun