Marvel Comics #1000 Celebrates the 80th anniversary of Marvel’s debut comic (Marvel Comics #1) under original publisher Timely Comics, the big 80th-anniversary issue hits your local comic shop this week (If you want to learn more from the original press release, check out our coverage!). This beast of an issue features a creative team of 80, with each contributing one page focusing on the year of publication, while Al Ewing oversees writing duties; our as Marvel dubs him—The Mastermind. With no time like the present let’s crack open this issue 80 years in the making.

Ewing begins the 80 plus page giant by mirroring Marvel Comics #1’s first panel, with Phineas Horton opening the door for the Scientists’ Guild, thus opening the 80-year history of Marvel Comics. The stories written directly by Ewing tells the ongoing story, while others tell the story of specific years within one page. As the story builds Ewing’s overreaching plot is seen less and less throughout the multiple decades, but each time you read an Ewing page your eyes will be scanning it for details. 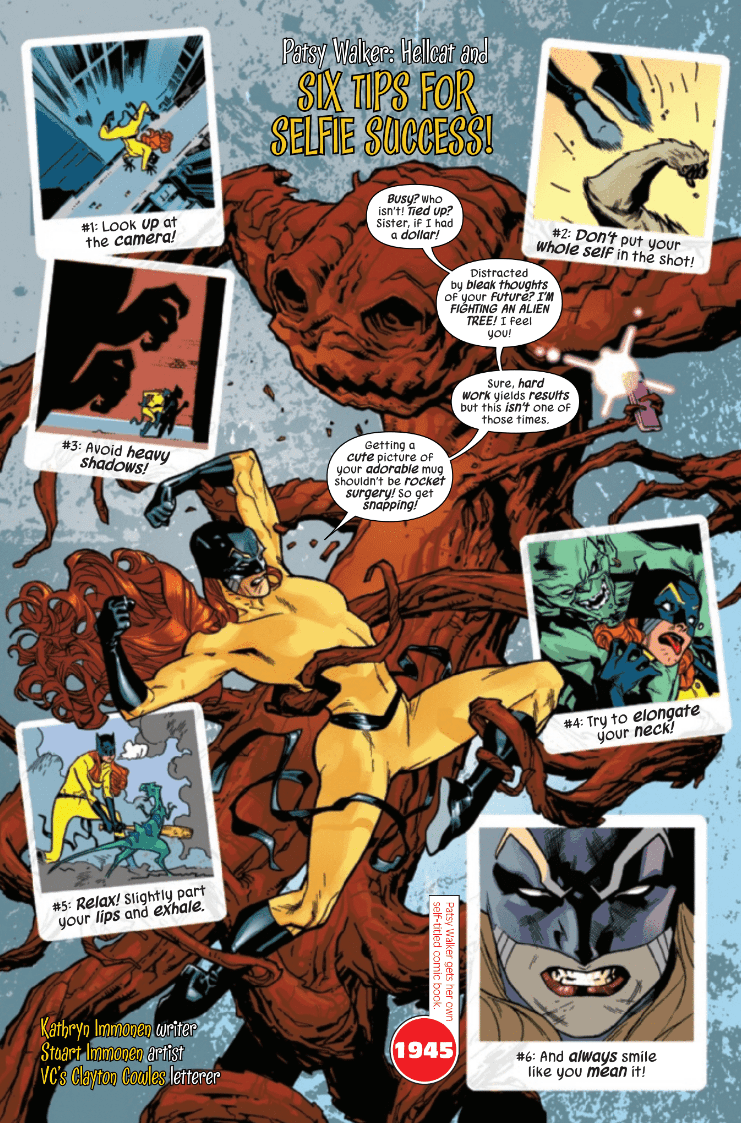 Essentially Ewing’s story is the spine holding it all together, as the rest of the creative teams write a singular page that contains its own story, while fundamentally tying in. These moments of synchrony at times can be hard-pressed to present itself, to the point you may need to re-read the giant that is Marvel Comics #1000. While at other times the single pages gel perfectly with the story that Ewing presents. This story that Ewing tells ranges from the very beginning of history to the now (2019), and beyond (2020).

Focusing around a new Marvel artifact titled Eternity Mask, Ewing sets up a mystery that climbs through the years of Marvel Comics, plus some movies, which seems weird but we’ll get to that. This mysterious mask makes its way through every era, yet is always hidden with a group always on the search, one being Three Xs’. If you don’t know who that is it’s okay, Ewing and team grabbed so deep in Marvel lore that they pulled characters that have only been used once! When Marvel claimed this would dig into its history they were correct.

This mystery of the Eternity Mask and teams searching for it seems to be pushing towards a future event, especially with one long lost character returning. Sorry, no spoilers! Each page Ewing writes adds to this time-spanning mystery with only a few years feeling like they could’ve focused on other big milestones. As every single page focuses on a single milestone of that year, some start to feel like a stretch or that they could’ve chosen something more prominent. Nonetheless telling a story in one page is hard, with some taking a novel approach by having his or her story be like a page out of a book. 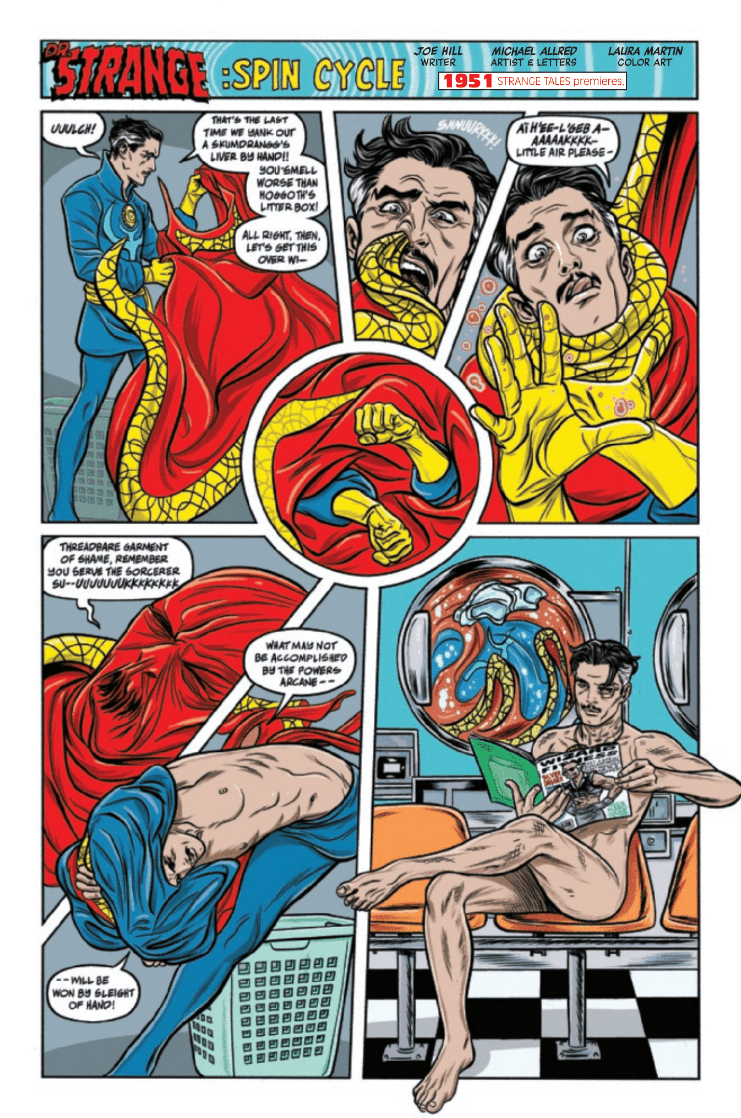 As with the writing side, the art is done by an abundance of creators too. Each artist comes with their pros and cons, with the pros usually outweighing the cons. In a few cases, this statement isn’t true with some colors feeling off and pencils feeling stiff or boring. To fit a whole story for a specific year in one page is a hard feat with most accomplishing this feat, but for others, if the art had a chance to breathe it would’ve benefited.

Another aspect of art that could’ve benefited by being different is matching art styles with the years. A good example of art style mixing with the publication year is Michael Allred for 1951 (Pictured Above). His style blends perfectly with the year, whereas 1939 has Steve Epting’s (picture below) style of art – which is great – but could’ve matched the year better. Instead Marvel could’ve had Tom Scioli, Ed Piskor, or Greg Smallwood (to name a few) to imitate the classic art style. 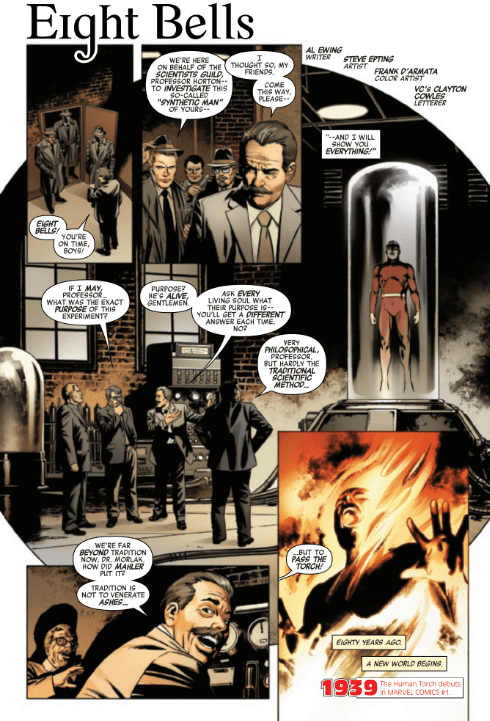 If Marvel tried harder to match the perfect artist with year,  the impact of each page would have hit that much harder. They did excel on some years that feature the artist that worked on that comic during said years. A great example would be 1991 with Rob Liefeld and X-Force/Deadpool, and the following year (1992) Erik Larsen is back on Spider-Man; which was the year he debuted as writer/artist for the title.

Without going into spoiler territory let me tell you about the best page—the year 2019 by Christian Ward. For a page that’s heavy in dialogue, Ward knocks it out of the park with no panels, just keeping it a one-page spread. In this we see Eternity as he informs the readers of events, which may sound boring, but with the swirling colors and LSD esque art it’s anything but.

Unlike the art and writing side lettering is accomplished by a team of 16 that rotates with the pages; with some artists doing it themselves. In most cases it’s the usual word bubbles, with nothing too extraordinary, but the few times the letterers let loose it’s a blast to see. Two great examples are the text in The Farmer, which is a story about Thanos and Galactus. In this story letterer VC’s Travis Lanham changes the format of all the dialogue with it becoming italicized and purple.

Another great example of changing the dialogue boxes/bubbles for the better is in The Guild of Strange Science which take place 1500 years ago. Instead of going with a simple box to show the inner narration, VC’s Clayton Cowles instead conveys it with a tattered scroll, befitting the era the story takes place in.

Marvel set out to celebrate 80 years by respecting what came before them while setting pebbles of new plot scattered throughout its history, that seems to be building to a huge event for 2020. This team effort of 80 people is a big deal and every creator should be acknowledged for how much work went into it. Having to wrangle that many pages from so many people is a huge task, with Ewing and team knocking it out of the park.

Although it had a few minor blemishes with some stiff art at times, stories that felt like they didn’t add to the plot, a couple of stories killing the flow, and a few cases were Marvel could have picked something other than what they did for that year; Marvel Comics #1000 succeeded in its delivery.

As great and memorable as some moments were, these two words had me in tears from laughing so hard.

A Marvelous Cast of Creators

With such a huge cast of creators here is Marvel’s credits page, with a complete list of who worked on this giant issue! Plus an “in memoriam”, which was great of them to add. 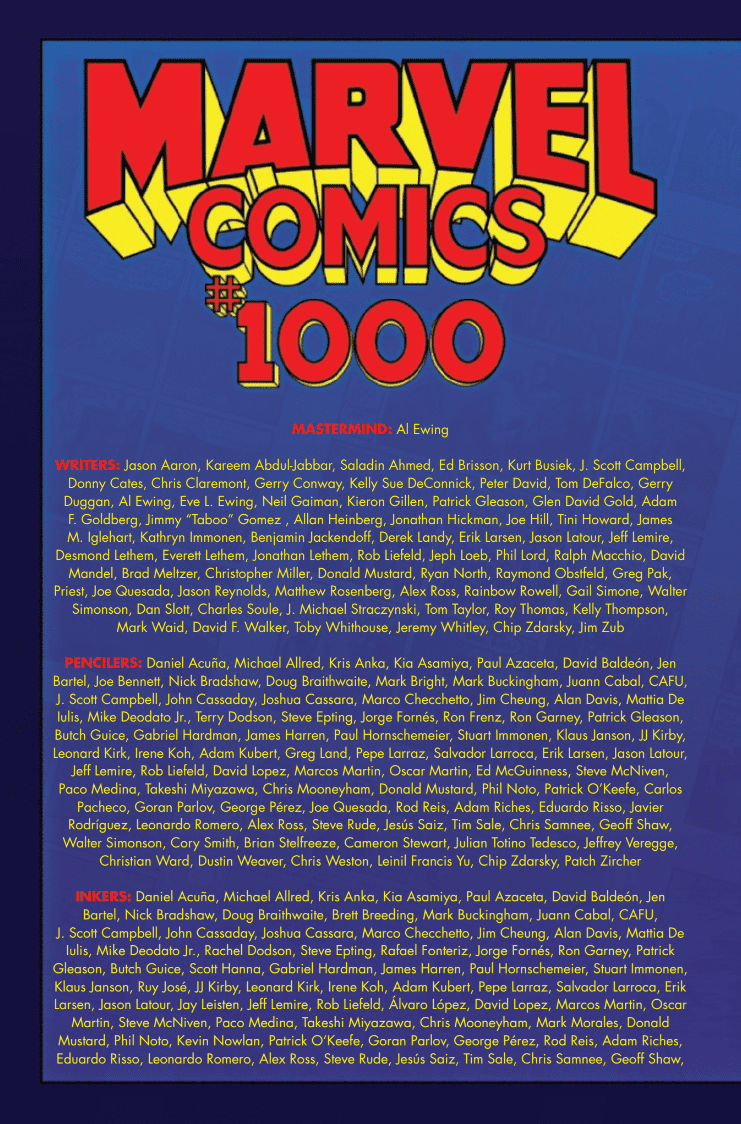 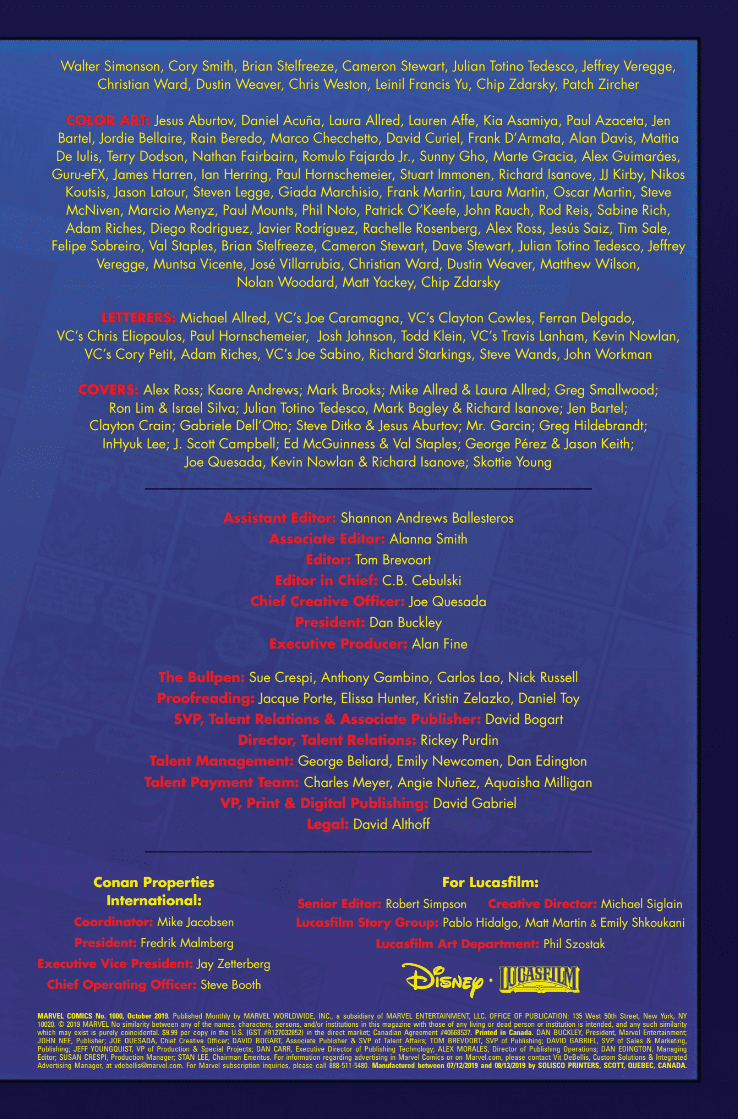 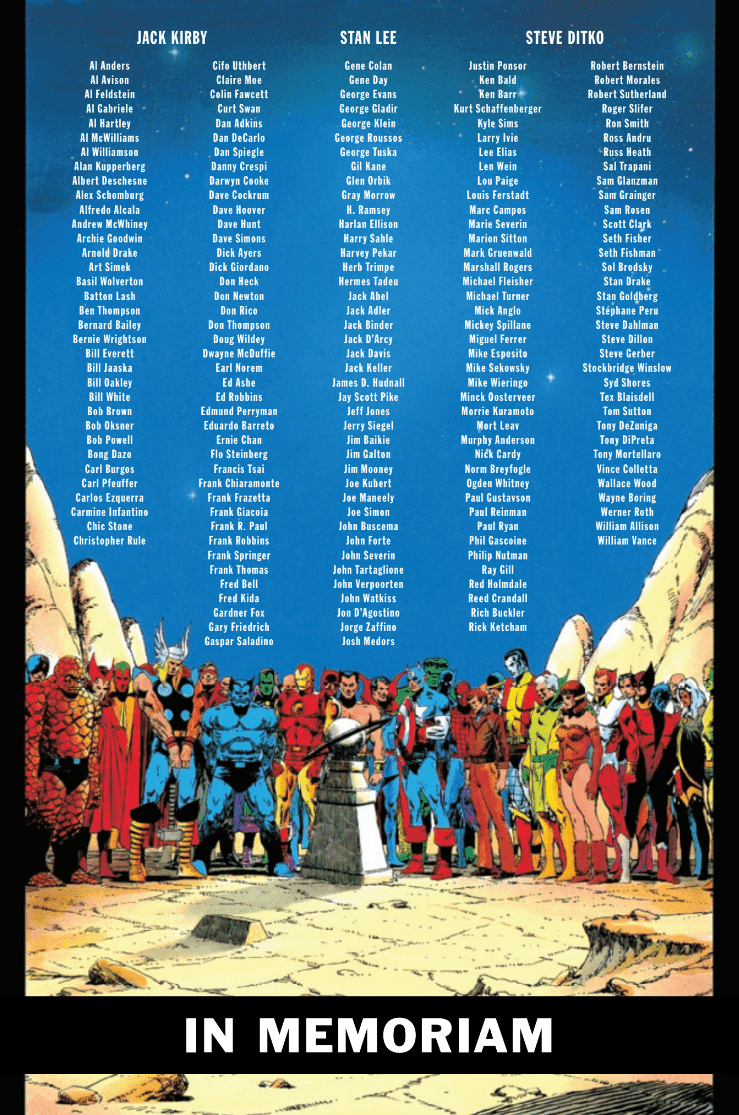 What is my favorite stories you ask? Well, I have two, that would be Joe Hill/Michael Allred, and Phil Lord & Christopher Miller/Javier Rodríguez!

Plus my favorite cover below by Michael Allred! 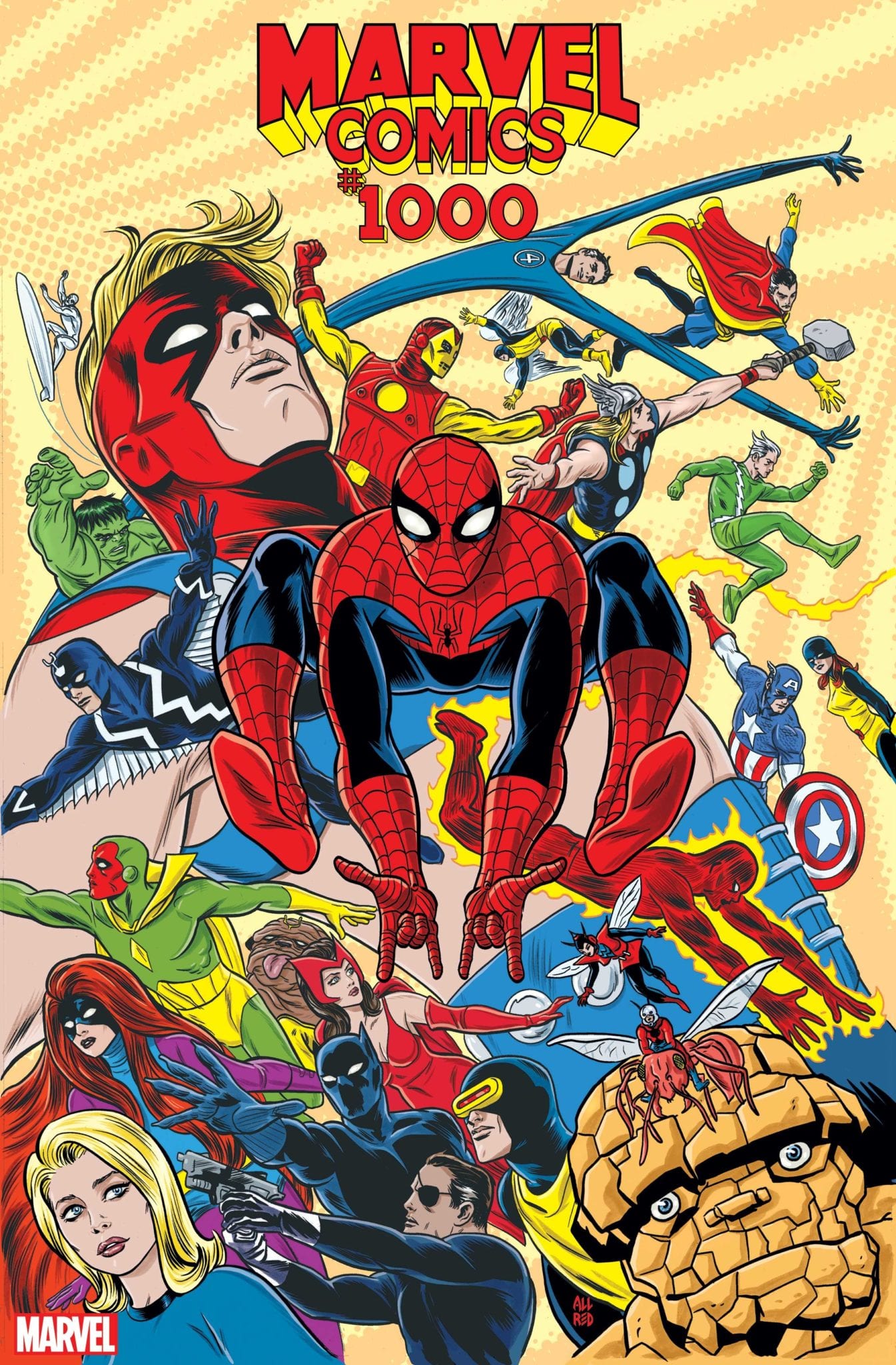 MARVEL COMICS #1000 is a marvelous celebration of 80 years that chronicles this achievement in near perfection. Kudos to every creator who worked on this mammoth of an issue, and those of the past years that made this possible!Jason Jeffords JrReview: MARVEL COMICS #1000 Celebrates History While Beginning a New Mystery