Review: JUSTICE LEAGUE #30 and the Time Heist for Totality

The Year of the Villain is in full swing, and Justice League #30 kicks off the Justice Doom War. It is the culminating event to everything Scott Snyder and James Tynion IV have been writing in Justice League since the series began in May, 2018. To quote Snyder on Twitter, “if you only ever pick up one issue of our run, let it be this one.”

In short, Snyder is right. 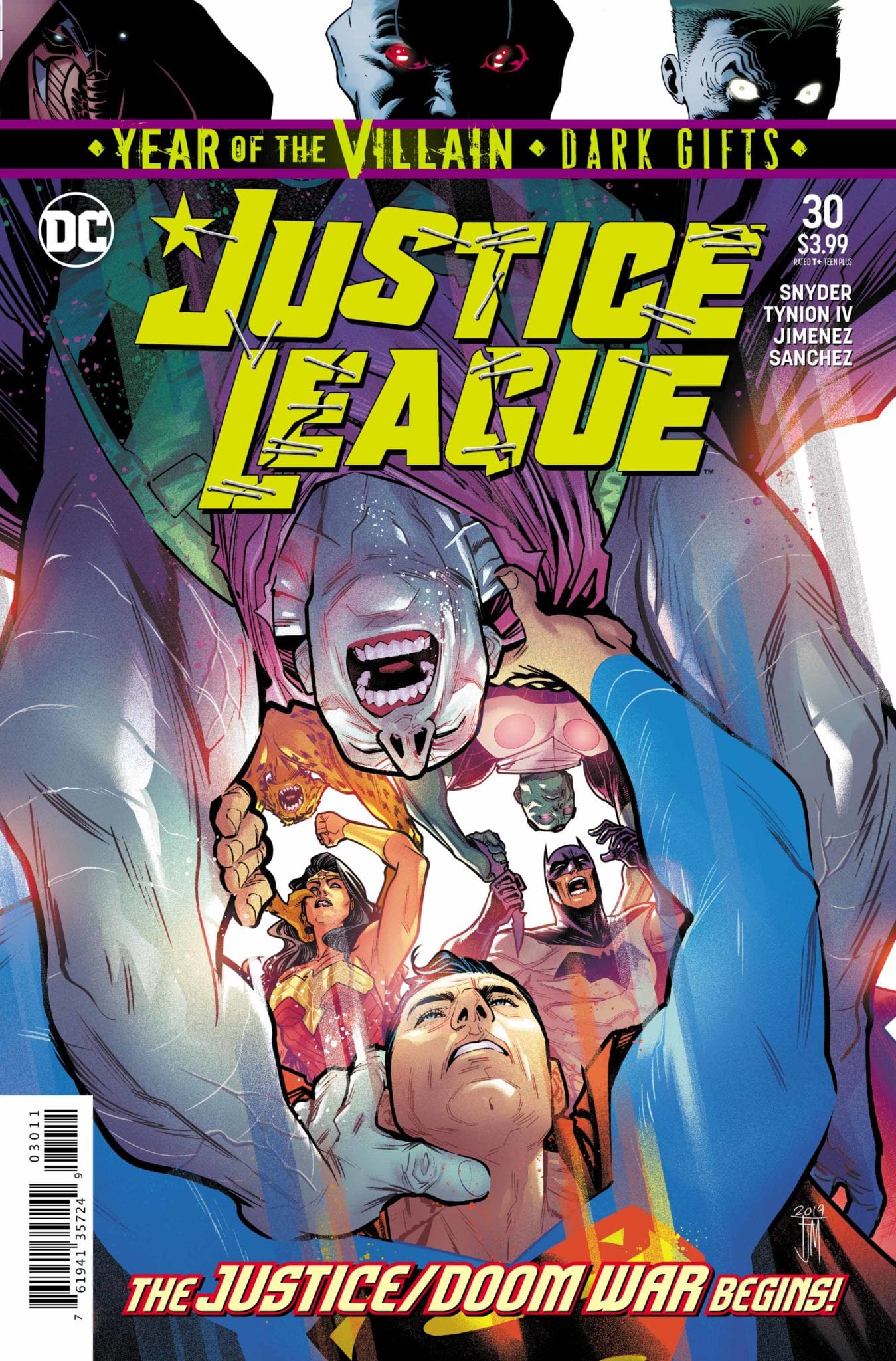 The “Justice Doom War” starts here! The Lex Luthor the League has known and fought is no more, replaced by an apex predator version of Lex, powered by Perpetua with a goal of bringing tragedy to the DC Universe. Now that Lex has powered up villains across the cosmos, he marshals his own troops, sparking a war between the Legion of Doom and the Justice League that will span space, time and the Multiverse itself. This is the start of the next big Justice League event, with consequences affecting “DC’s Year of the Villain” and beyond!

As the greatest heroes of the DC Universe assemble for an epic showdown, so does a terrific creative team. Snyder and Tynion take on co-writing responsibilities to bring this vast event to its crux. The stakes are set as the newly-expanded Justice League prepare for an imminent attack from Lex Luthor (looking like a full on Prometheus Engineer), who now possesses six of the seven hidden energies needed to bring Perpetua to full power.

Snyder’s infamous worldbuilding is on full display in Justice League #30, which is so perfectly designed for the comic book medium. It’s difficult to think about an attempt to make a movie out of this story. It’s so cosmic and grand, and precisely what makes comics great. Can you imagine the string theory board Snyder needed to put this story together?

The standout character in this issue is without a doubt Starman. Since being reintroduced way back in 2017’s Dark Nights: Metal, his strength and purpose has finally been brought to light. It was apparent he was a powerful hero, and somehow integral to this story. But, after this issue, it’s safe to say that Starman is probably the most important hero in the DC Multiverse at the moment.

The final pages of Justice League #30 are something to behold, and an outstanding setup of what’s to come. The plan to retrieve the Totality fragments in the past and future rings similar to another epic superhero team-up time heist. However, that doesn’t make it any less exhilarating and compelling. 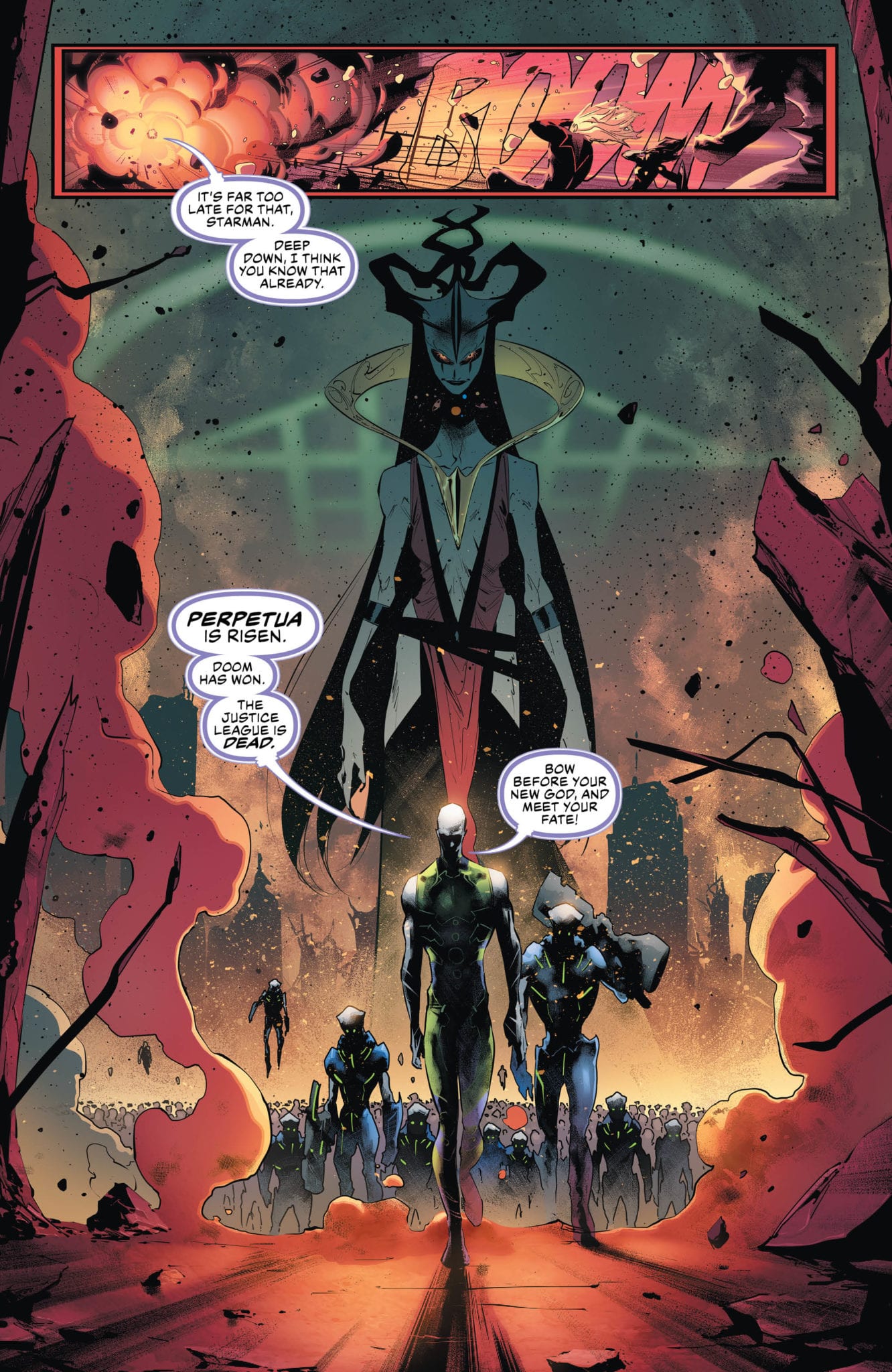 Jorge Jimenez and Alejandro Sanchez are back, and their immeasurable talent is as strong as ever! There is a moment, however brief, where the exposition starts to drag. But it’s the vast array of colors and designs as the heroes and villains of DC gather that bring those pages of Justice League #30 to life.

Another shining example of the artwork are the opposing images of Justice and Doom over a depiction of the Multiverse in its gleaming glory. The visuals this team crafts to aide in the intricate worldbuilding have been some of the artwork in comic books today. Though this one is a bit cluttered with caption boxes, the artists’ use of color and light and kinetic energy is nothing short of stunning.

In the 20 short pages that make up Justice League #30, you will find a continuation of impressive universe-building, stunning artwork, and an ending so mind-bogglingly exciting you’ll be counting the minutes until the next issue is released.

What did you think of Justice League #30? Let us know in the comments!

In the 20 short pages that make up Justice League #30, you will find a continuation of impressive universe-building, stunning artwork, and an ending so mind-bogglingly exciting you’ll be counting the minutes until the next issue is released.Review: JUSTICE LEAGUE #30 and the Time Heist for Totality