Review: JUSTICE LEAGUE #28 and the Evolution of Lex Luthor

Previously on Justice League, Martian Manhunter, while on the hunt for Lex Luthor, recalled a traumatizing moment in his childhood at the hands of Lex’s father. Instead of finding Lex, he stumbled upon a decoy Professor Ivo, who was creating a mechanical human/Martian hybrid army for Perpetua. Upon defeating the apex predator bots, with the aide of Hawkgirl, J’onn J’onnz was still relentless in his pursuit for Luthor. Not a moment too soon, a holographic Lex arrived with a message for the Manhunter from Mars to come and find him.

Meanwhile, the other members of the Justice League, now with the World Forger as an ally, come the Monitor’s doorstep to recruit him in the fight against his mother, Perpetua. Superman and Flash begin to remember the previous Crises that they endured in a previous life. The Monitor agrees to join the crusade, and the team heads to the dwelling of the last cosmic sibling – Anti-Monitor.

Justice League #28 is written by James Tynion IV, with pencils by Javier Fernandez and Daniel Sampere, and inks by Fernandez and Juan Albarran. This issue is the final in the Apex Predator storyline, which leads into the Justice-Doom War and continues the Year of the Villain crossover event. 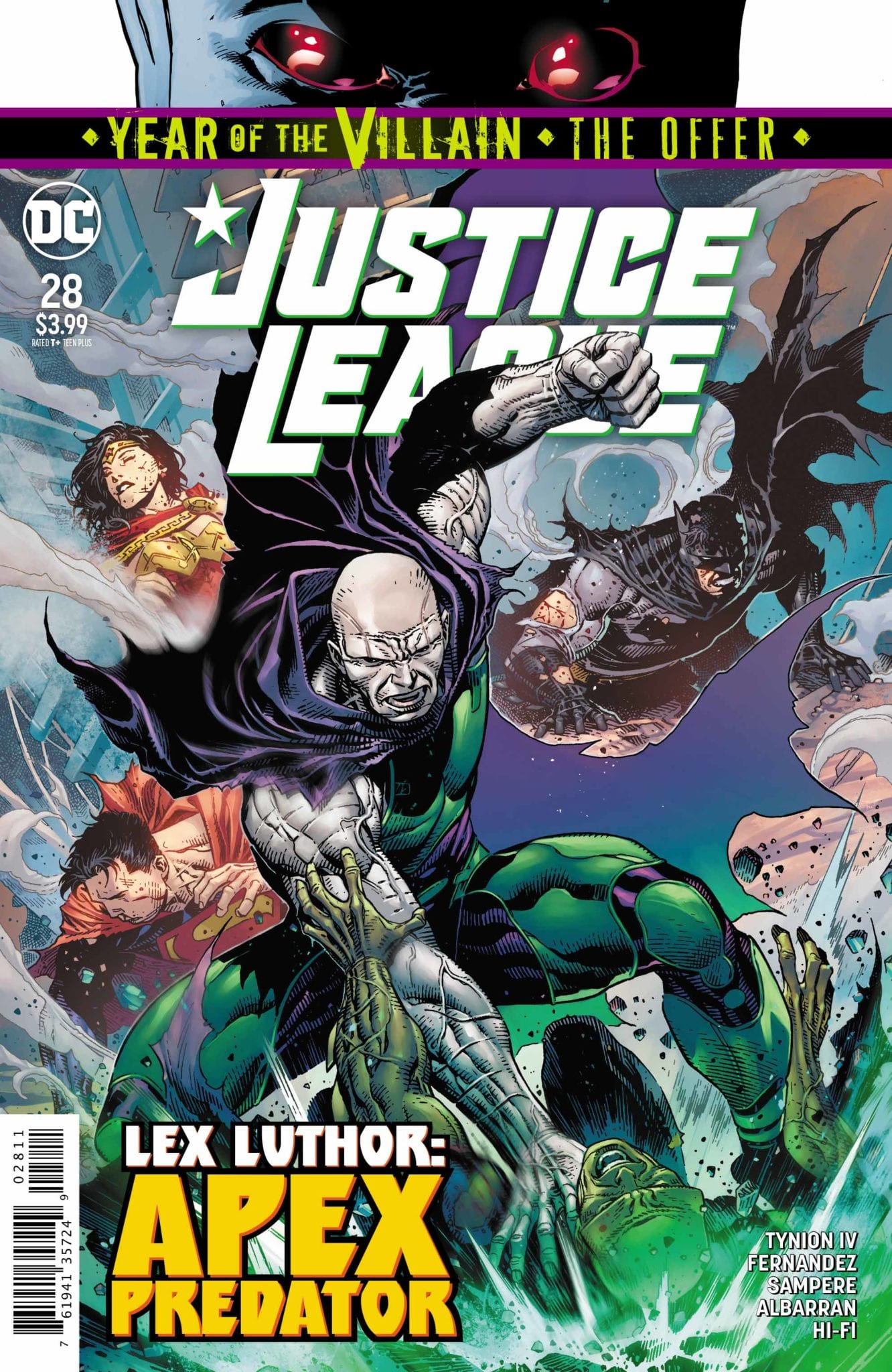 The Apex Predator rises! Justice-Doom War is coming! This is the culmination of the Legion of Doom’s master plan, and they will take the Justice League to far-out places they may never return from…and do things the DC Universe may never recover from.

Just like that, the “Apex Predator” arc comes to its conclusion. And it’s quite an exciting one at that. Tynion does an exemplary job with the back and forth debate over the nature of humanity between Martian Manhunter and Lex Luthor. The tension bleeds through the page. The other plot thread with the Justice League, World Forger, and Monitor arriving on Qward doesn’t hit quite as compellingly. But it’s okay as we don’t spend that much time with them in this issue.

These are the greatest minds in the DC Universe, so it makes perfect sense to pair these two together. Tynion writes them as if they are somewhat in awe of one another’s intellect, giving off a very Sherlock/Moriarty dynamic. They are enemies that want to destroy one another yet cannot help but be interested in just how they would do it. We have witnessed a thrilling evolution of Lex Luthor over these 28 issues of Justice League, particularly in the Year of the Villain one-shot, and it’ll be exciting to see how it pays off in the upcoming Justice-Doom War. 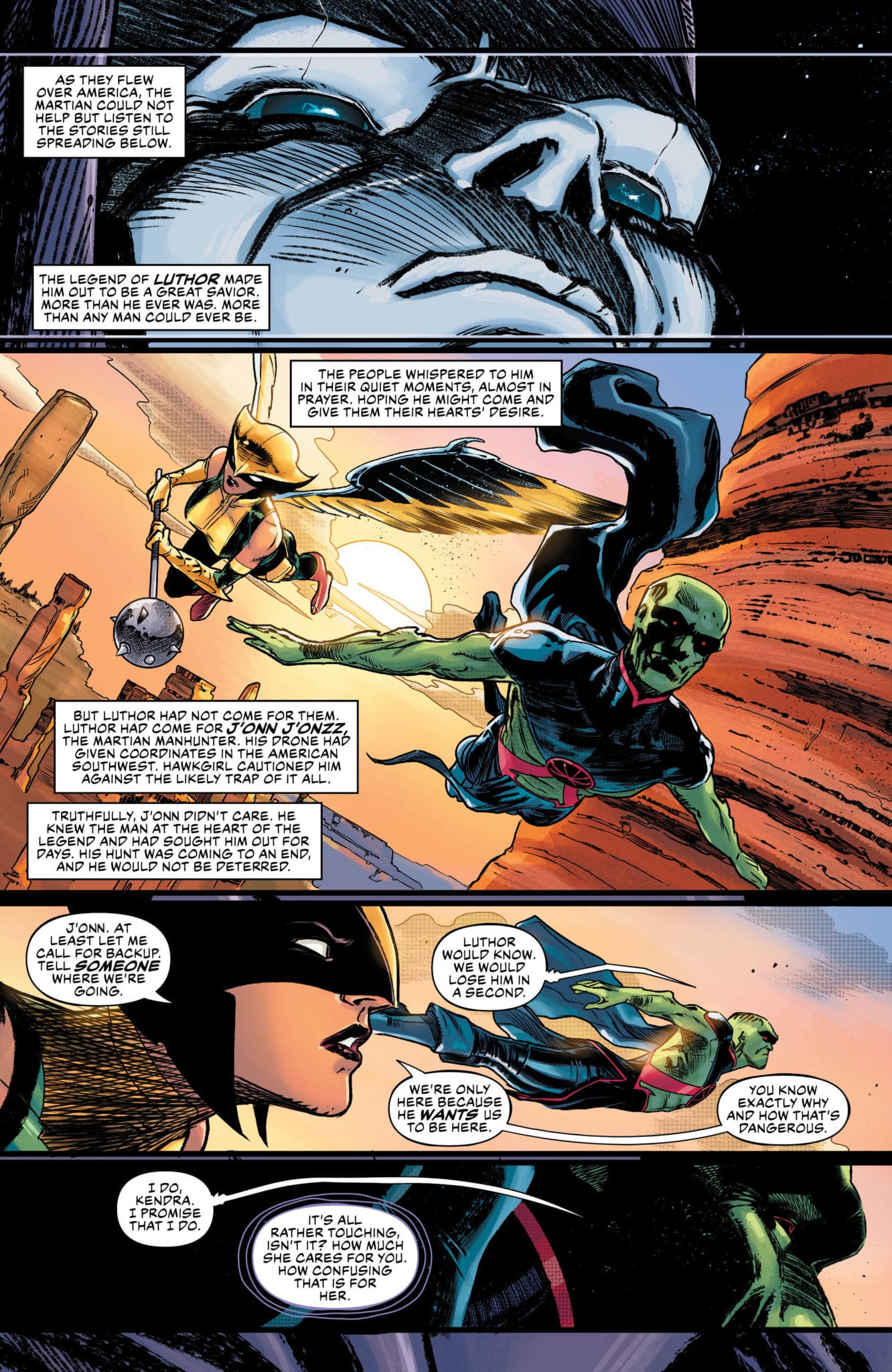 Javier Fernandez brings his signature dark and gritty artistry to this issue, and it’s now clear more than ever why he was a good choice for this story. In the previous issue, it was the way he illustrated the fluctuating appearance of J’onn J’onnz throughout the issue. In this issue, it’s Fernandez’s cloaked and frightening Lex Luthor that wins the book. He positions Luthor that gives the reader just enough to see his transformation, yet still holds back to keep him dark and foreboding.

Daniel Sampere does the artwork on the pages in the Hall of Justice, featuring a small but memorable scene with Starman, Jarro, and Shane (the son of J’onn J’onnz and Hawkgirl from the Sixth Dimension). His style is lighter in tone and coloring, offering a quick but cute palette cleanser before the book’s dark conclusion.

While the scene with the Justice League on Qward felt a bit off, it was the moments between Lex Luthor and J’onn J’onnz that made this issue as gripping as it is.

What do you think of Lex Luthor’s transformation in Justice League #28? Let us know in the comments.

While the scene with the Justice League felt a bit off, it was the moments between Lex Luthor and J’onn J’onnz that made this issue as gripping as it is. Review: JUSTICE LEAGUE #28 and the Evolution of Lex Luthor