Previously, on Justice League (Apex Predator – Part 1), J’onn J’onnz searches for a cloaked man that people are using as the embodiment of fear mongering across America in the aftermath of Lex Luthor’s villainous call to action. This cloaked figure turns out to be none other than Lionel Luthor back from the dead. Meanwhile, Superman, World Forger, and other League-ers attempt to recruit their Multiversal counterparts in an effort to fix the Source Wall and stop Perpetua. Finally, Hawkgirl leads the search for The Legion of Doom in the Hall of Justice.

The “Apex Predator” story and “Year of the Villain” event continues in this issue, with forgotten pasts serving as the theme throughout. The Justice League has arrived at the Monitor’s world, while J’onn J’onnz comes face to face with the newest member of the Legion of Doom, and the eponymous Apex Predator is revealed. 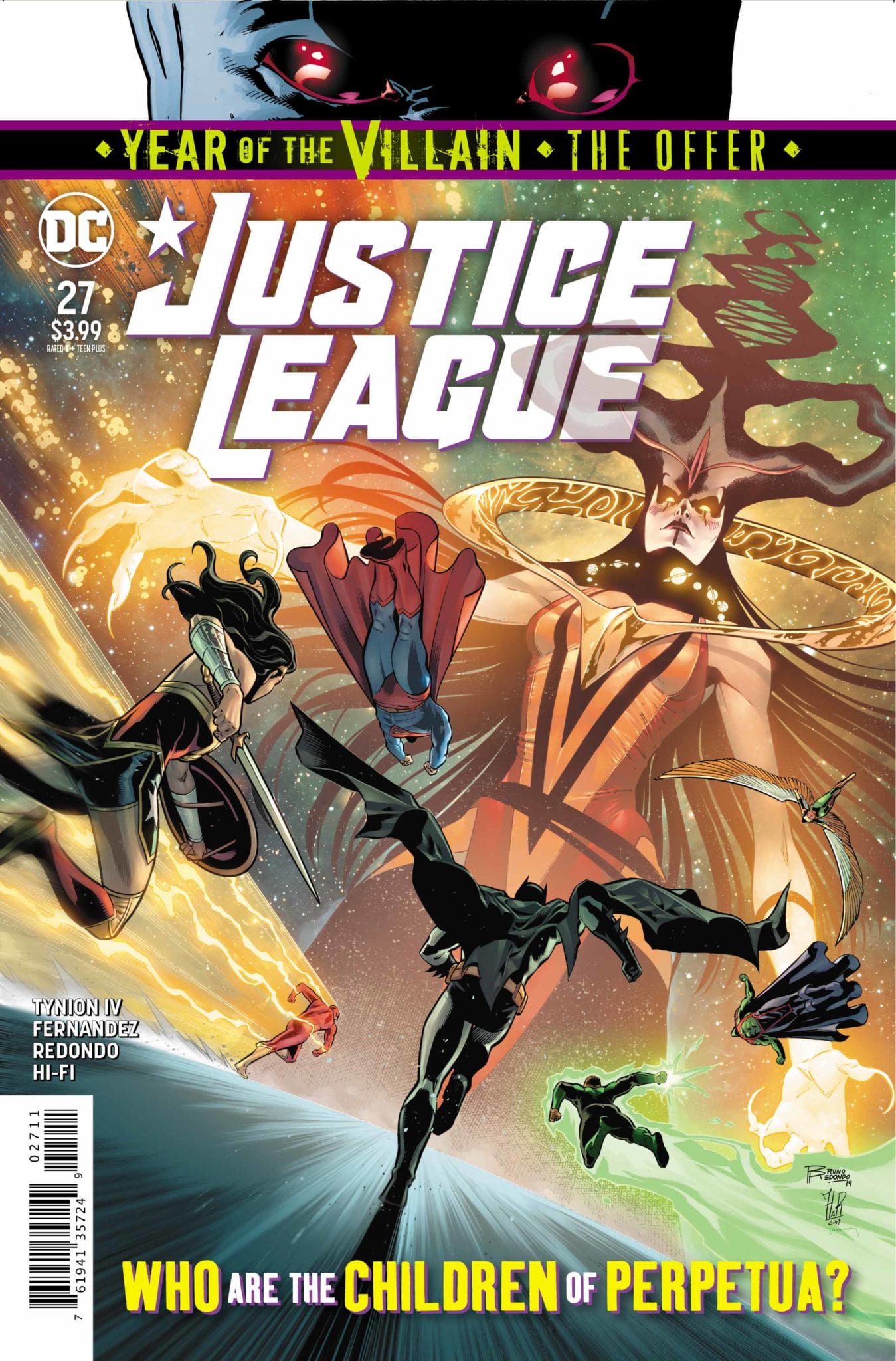 Eons ago, the Monitor, the Anti-Monitor and the World Forger stopped the rise of Perpetua—but can they overcome billions of years of mistrust to work together and do it again? Plus, Lex Luthor’s offers across the DC Universe haven’t gone unnoticed—Martian Manhunter is aware of “the Offer.” And J’onn J’onnz will pay the price.

James Tynion IV continues the three threads he began in the previous issue of “Apex Predator,” letting shine some deep moments of character development as well as plot building. As mentioned above, forgotten pasts served as the interconnecting motif throughout the book. J’onn J’onnz recalls the horrors of being experimented on as a child by Lionel Luthor, all the while in a similar situation in the present at the hands of Professor Ivo. This is the strongest storyline in the issue, as Tynion has created an interesting take on the Martian Manhunter, one who is filled with rage and obsessively looking for answers.

The writing becomes a bit uneven from here on out. Tynion hurriedly throws in a quick reiteration of the various Crises the DC Multiverse experienced, and why that applies to the Monitor, as well as World Forger attempting to enlist his brother in the fight against their mother. It’s a lot of world building in four pages, and Tynion is not as poetic as Snyder has been with this amount of exposition.

Ivo reveals he has been creating the human/martian hybrid army for Perpetua, dubbed “Apex Predator” by Lionel Luthor back in the day. But J’onnz obsessive hunt for Lex is incomplete. Despite Hawkgirl’s plea, he must continue. Tynion presents a tantalizing setup for the next issue of Justice League, with a holographic Lex Luthor offering the Martian Manhunter the answers he desperately seeks. 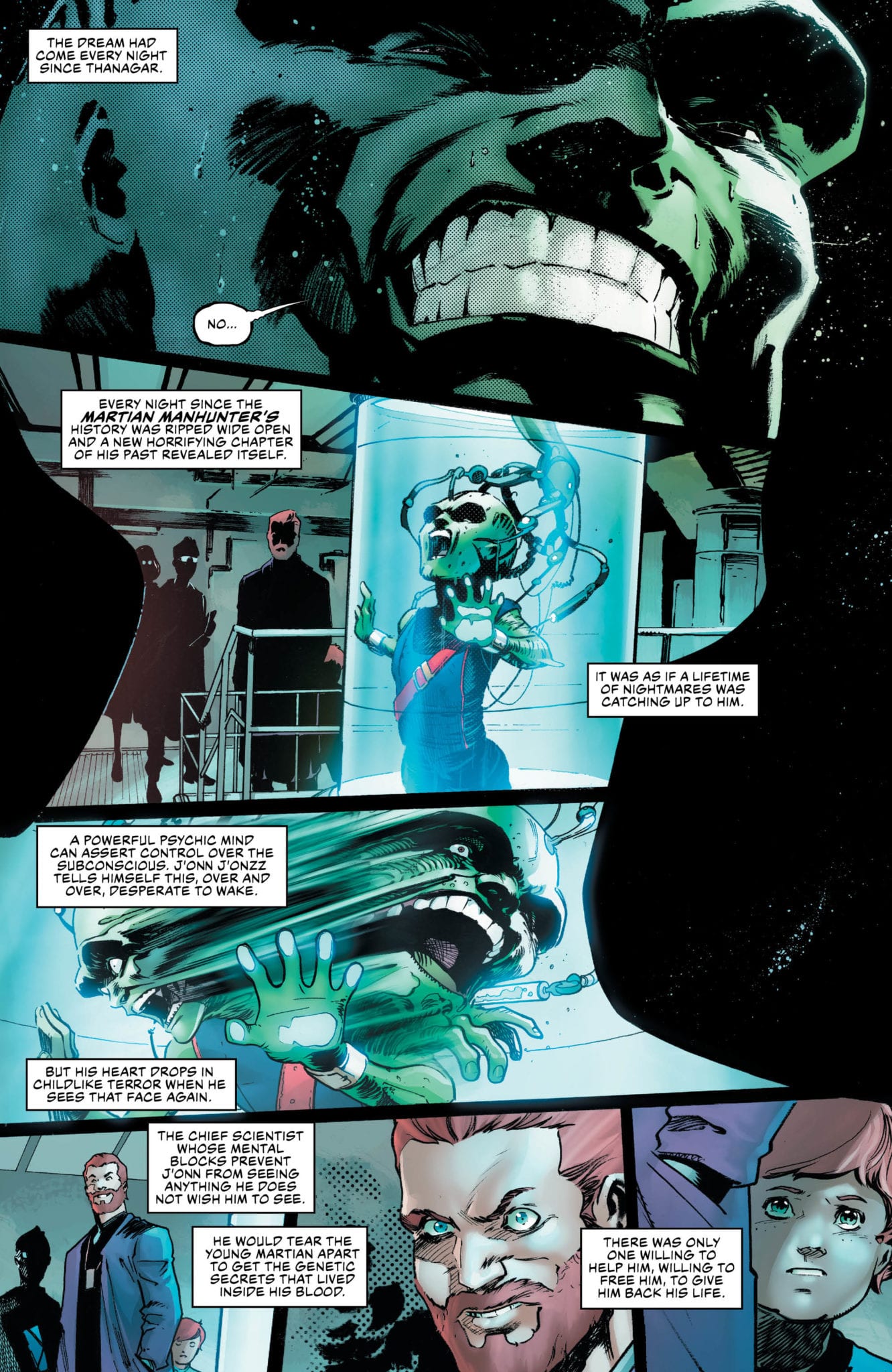 Javier Fernandez returns in “Apex Predator” with his classic, pulpy style. This time, he really delivers supreme artistry, particularly with the fluctuating appearance of J’onn J’onnz throughout the issue. We see an enraged Martian Manhunter, a younger version being split in two, an oversized version imprisoned in a Bacta Tank, and a liquid version leaping through a computer monitor. Fernandez gives J’onnz so much detail in his varying morphed and twisted appearances, you can truly feel the pain and rage that the Manhunter from Mars is experiencing.

The story and artwork featuring Martian Manhunter is on point, but the middle pages in “Apex Predator” comes off as a bit flimsy.

What did you think of the second part of the “Apex Predator” storyline in Justice League #27? Let us know in the comments!

The story and artwork featuring Martian Manhunter is strong and on point, making up for the middle pages in “Apex Predator” which comes off as a bit flimsy.Review: JUSTICE LEAGUE #27 Reveals a New Apex Predator