DC Comics’ JOHN CONSTANTINE: HELLBLAZER VOL. 1: MARKS OF WOE is out September 29th, and England’s favorite bastard goes back to his Vertigo roots in this wickedly smart, funny, and exciting collection.

Contents & Credits
MARKS OF WOE collects The Sandman Universe Presents: Hellblazer #1, John Constantine: Hellblazer #1-6, and Books of Magic #14. It’s by writer Simon Spurrier and artists Aaron Campbell, Matías Bergara, and Marcio Takara, with colors by Jordie Bellaire and Cris Peter, and letters by Aditya Bidikar. The Books of Magic issue is co-written by Kat Howard and illustrated by Tom Fowler and Craig Taillefer, with colors by Jordan Boyd and letters by Todd Klein. The stunning collection cover is by Bilquis Evely and Mat Lopes. 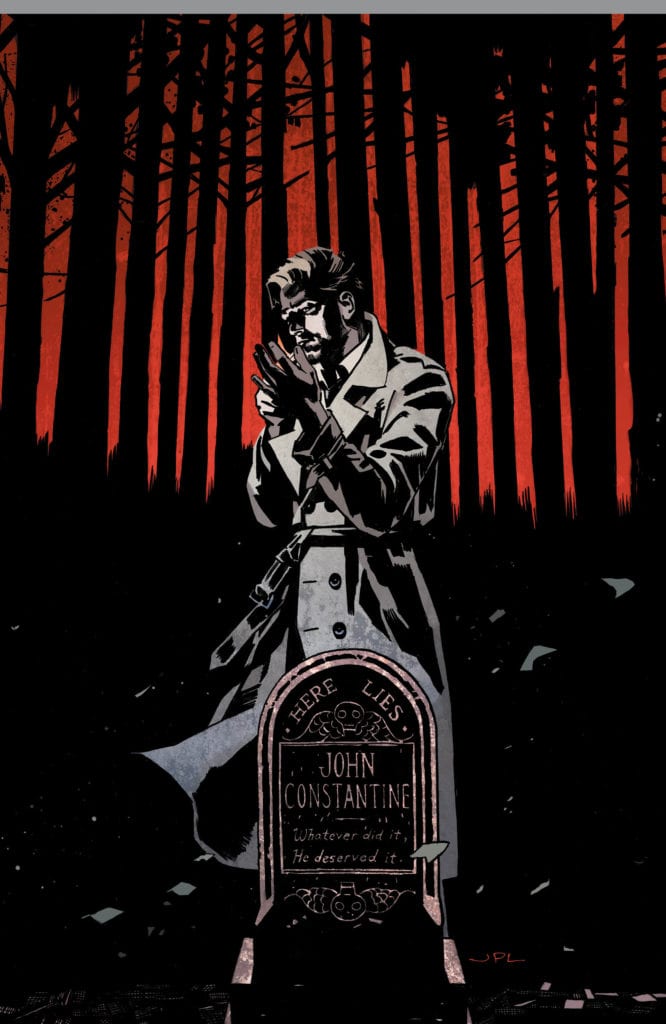 Si Spurrier proves himself to be the perfect choice to write a modern HELLBLAZER comic. His Constantine is sardonic, witty, and outright rude. You love to hate John Constantine, but there’s also a clear pain beneath his surface that makes you root for him. Plus this is DC Black Label, so there’s no censorship here. Spurrier can write Constantine as crass as the character was back in the Vertigo days, and he takes full advantage of that freedom.

That’s going to be the big selling point for a lot of readers: This is a return to form for HELLBLAZER. After he was folded into the mainstream DC Universe and started palling around with the Justice League, Constantine had to be watered down and put on a leash. But now he’s off that leash again. And this doesn’t just mean he can swear openly once more (because, let’s be honest, if that was the main appeal it would get old fast). No, the real benefit is that HELLBLAZER can once again tell darker, more twisted, and more mature horror stories — and boy does it do just that.

Upon returning to the present, Constantine is greeted with an unfamiliar London — a post-Brexit London overflowing with ignorance and hate. There are evil forces at play which are poisoning people and fueling their anger, and the Hellblazer is on the case to take them down (if only for the bragging rights).

This is a book with a lot to say about the current state of London and the world at large. It’s full of smart social commentary, but it never comes off as preachy. If anything, the commentary makes these stories even scarier: Some of the evils that Constantine faces are the same evils that many of us face in the real world every day. The monsters aren’t just metaphorical though, so don’t you worry. MARKS OF WOE is full of terrifying demons that will haunt your nightmares.

A few different art teams work on this book, but the changes never feel jarring. Each team tackles its own story within the overall story, so the transitions actually feel smooth and natural. Plus, each artist brings a different vibe with his or her style, which elicits various tones and feelings.

Campbell’s London, for instance, is dark and dirty. You feel like the grit is going to rub off on your fingers when you turn the page. Horrors lurk in the shadows. Then Bellaire’s colors peek through the darkness and reveal the magic and wonder hiding beneath the city’s surface. With the combination of inks and colors, the settings recall classic art (particularly the work of Vincent van Gogh), especially in regards to the lighting and skyscapes, which further drives home the magical and mysterious tones of the story.

Bergara’s work meanwhile (still with Bellaire’s colors) is then more cartoony and bright. It works well since the story being told in Bergara’s issues is more humorous and fun, but it also sets up the reader for even bigger scares. Because the art and story is more lighthearted, when the terrors strike, they’re all the more terrifying.

Regardless of their style, though, or how they deliver horror, every artist on MARKS OF WOE is an excellent storyteller. They all know exactly how to frame and utilize silent panels in order to build dread and drama (and even comedy). Personally, I love the repeated use of a single shot during a sequence, changing only a character’s position or facial expression in either subtle or dramatic ways — or even adding a spooky element to the background. Whether the intent is to scare or amuse, it always seems to pay off. Also, ending a page on a shot and then doing a reverse shot on the page turn for a reveal is an excellent way to make the hairs on the back of your readers’ necks stand up.

The point is, when you’re doing a horror comic, the artwork is both the most important and the most difficult component to get right, but this team nails it. They pull every trick out of their respective bags to give you the willies.

If you like horror, or dark fantasy, or smug protagonists that you sometimes want to punch in the face but also maybe grab a drink with, definitely pick up JOHN CONSTANTINE: HELLBLAZER VOL. 1: MARKS OF WOE, out September 29th from DC Comics. With respect to everyone who’s written Constantine over the years, this is peak HELLBLAZER right here.