Review: GOING TO THE CHAPEL Gets One Hell of a Reception In Issue #4

On February 5th, the wildest ride in indie comics comes to a close as Going to the Chapel releases it’s fourth and final chapter. If you haven’t already been following the saga of Emily Anderson, nervous bride and impromptu hostage negotiator, now is the time to jump in to the story. It’s a blast of a read with a story that moves at an action-movie pace, and the finale is more than worth the cover price.

Emily’s special day came to a head last issue when she told her fiancé, Jesse, that she wasn’t sure she could marry him. As if that didn’t make the situation tense enough, the police had finally moved to bust into the Chapel and end the hostage situation going on there. Plus, the wedding guests had turned against the Bad Elvis gang, using their own wedding gifts as makeshift weapons of revolution. Now, time is running out, and Emily’s got to figure out a way of saving everyone not just from heartbreak, but from a disastrous end. 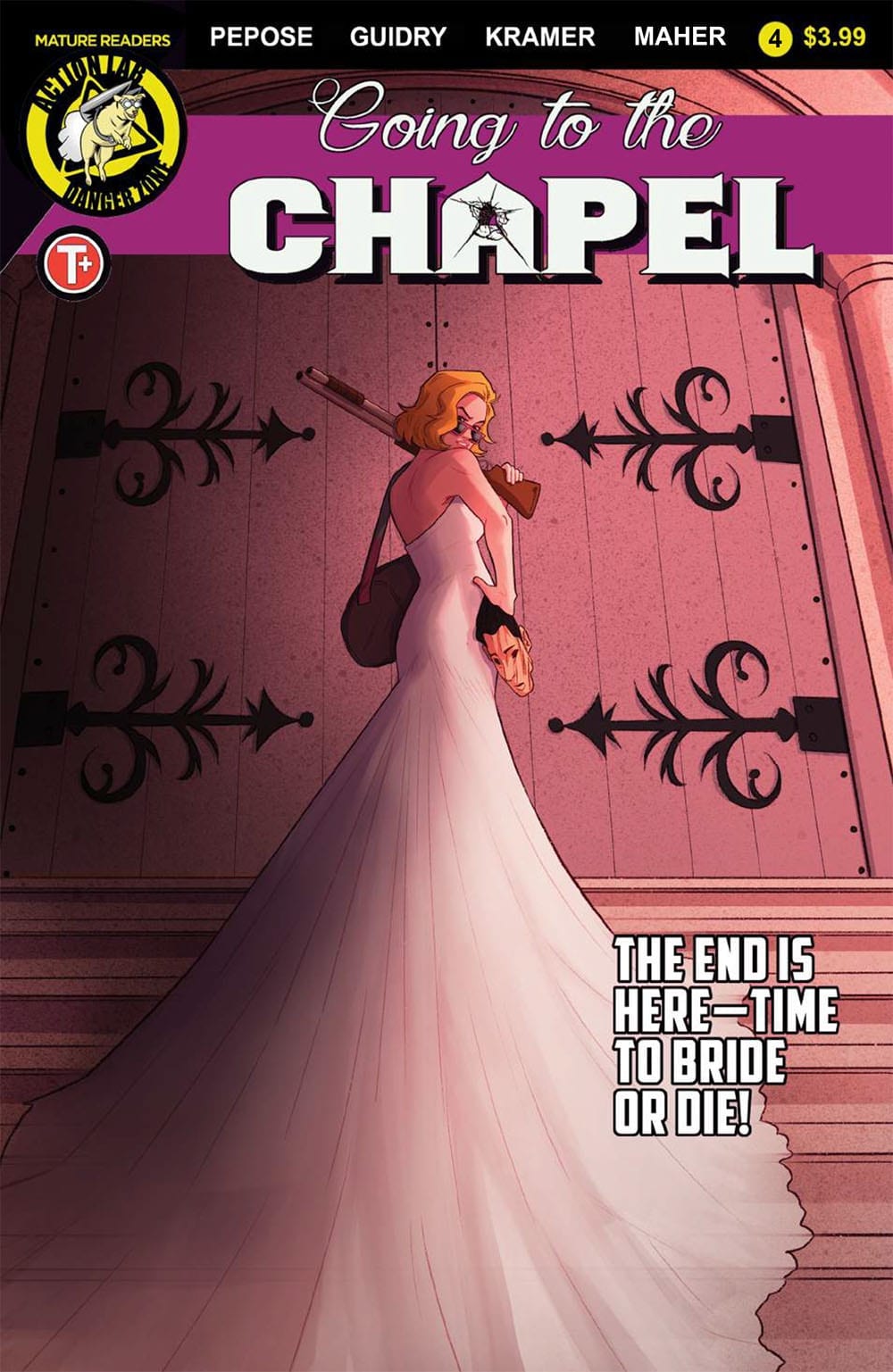 From issue one of this book, Emily has made choices based on impulse, adrenaline, and high-running emotions. What’s cool about issue four is that writer David Pepose begins it in a quiet moment for the uncertain bride. She gets the chance to think over everything that’s happened, and we get a rewarding window into her character. Now, more than ever, we the readers are with Emily Anderson in her precarious situation. We feel the stakes, the physical danger and the romantic hardships, bring about satisfying close to this emotional story. Still, Pepose doesn’t forget about the action. This is a rom-com with guns, after all. And there’s a whole team of SWAT agents just waiting to use them. 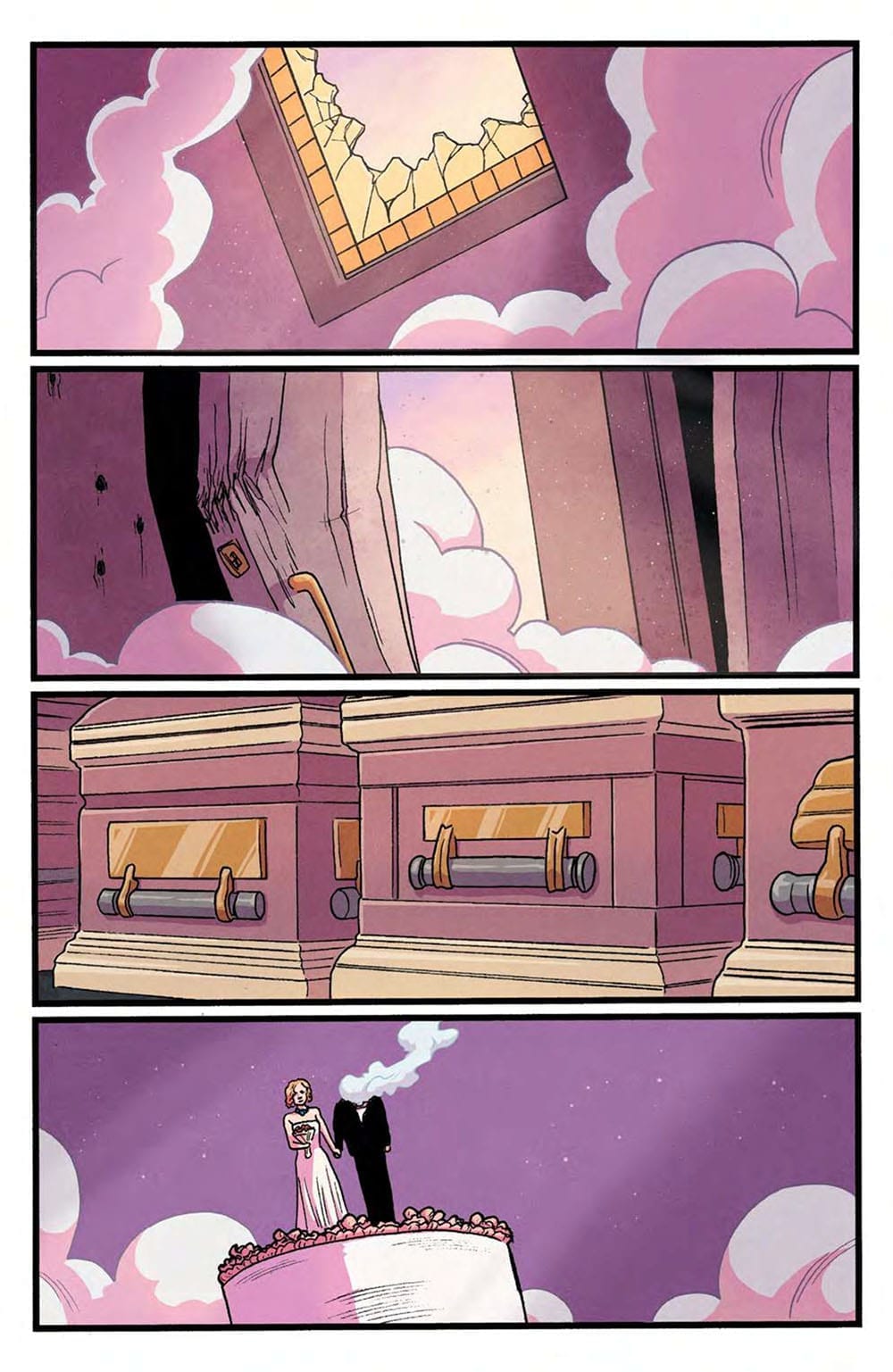 We’ve previously said that Gavin Guidry’s art provides the humor in this series, that he could make one hell of an Office episode in the comic medium. Well, issue four would be the Jim and Pam’s wedding. Throughout this run, you’ve been laughing at the goofiness of these characters and their hilarious reactions to extreme circumstances. What you forgot was that, at the same time, you were falling in love with them. With the same soul and genuineness he used to make you laugh, Guidry makes you feel in this issue. He produces some of the most heart-felt character one-on-ones to come out in 2019 comics, and an ending sequence that’s both warm and hilarious. Like all the other issues of Going to the Chapel, you’ll laugh your way through issue four. And once you close it, the smile will stay. 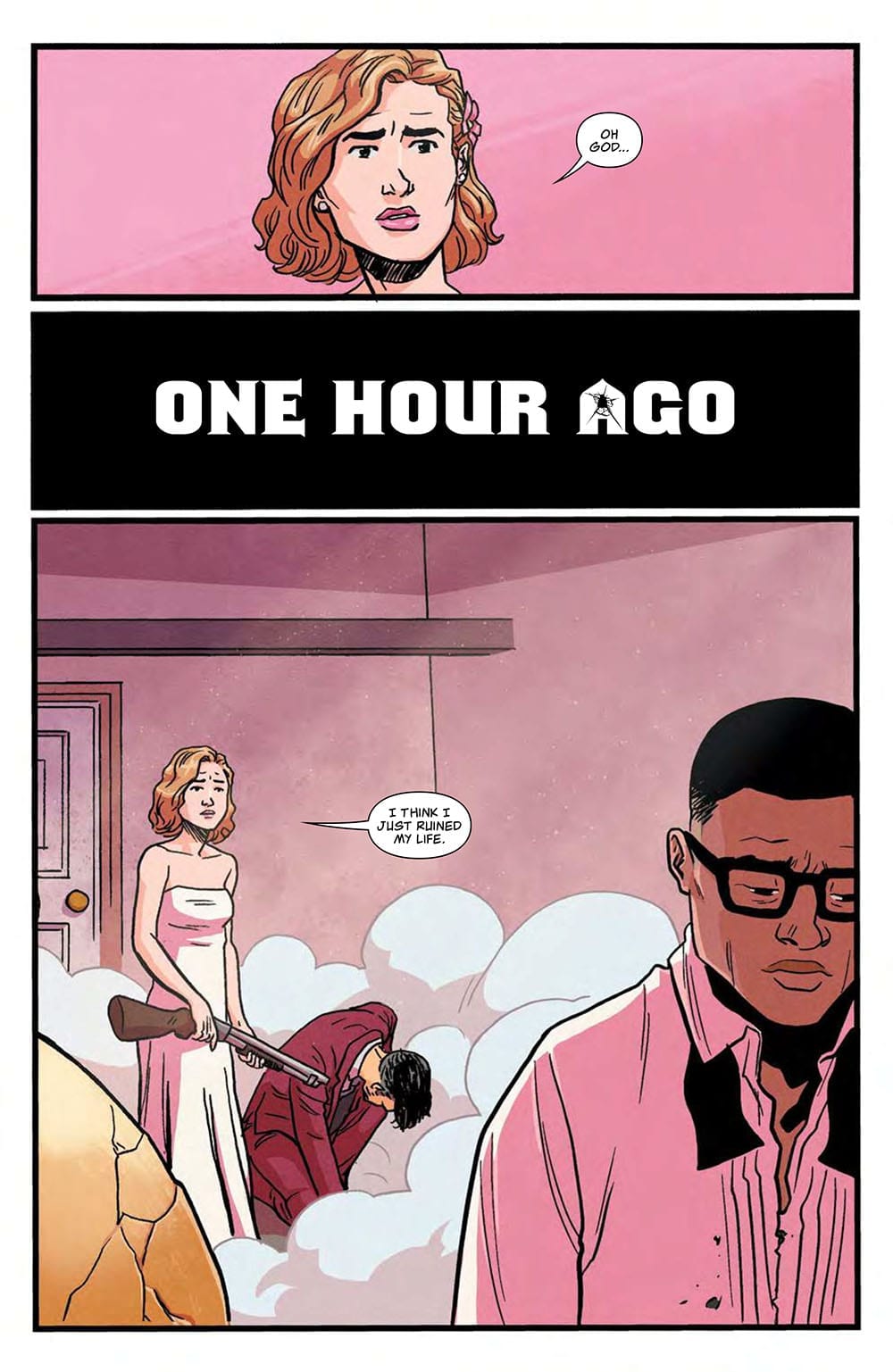 We’ve mentioned before that colorist Liz Kramer’s work makes the comic feel like its lit by a never-ending sunset. Now that we’re actually riding into one, it’s never felt more appropriate. In just four issues, Going to the Chapel has covered a lot of ground. It’s been a comedy, an action story, and a romance. Now that it’s ending, you realize that Kramer has not just provided the tone, but the consistency necessary to tell this tale. The colors she uses set a solid backdrop to the series. This means that even when even when the story is hopping genres, you as the reader never get taken out of it. Though her run on Going to the Chapel is over, we can’t wait to see more from Kramer. 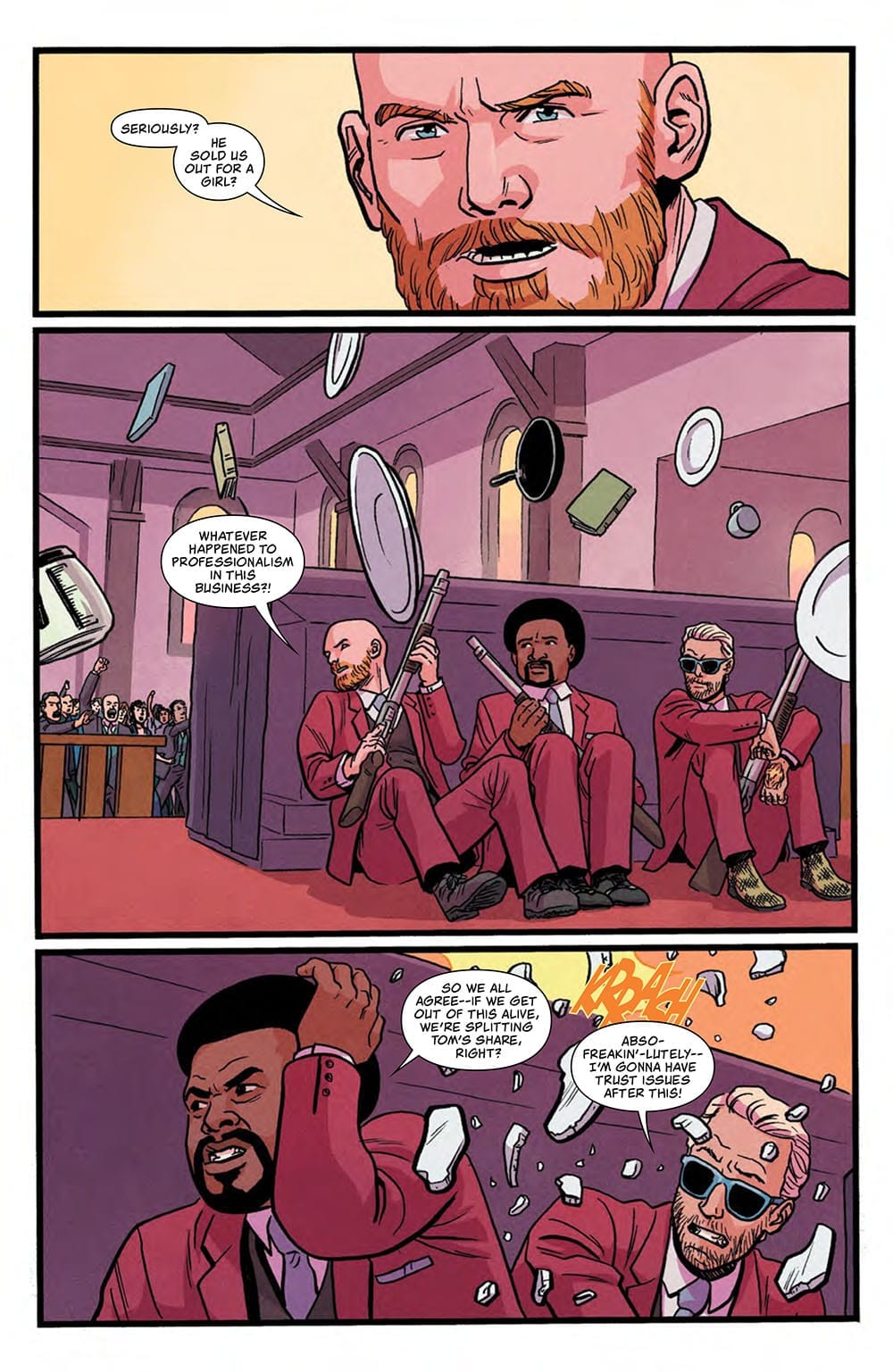 Something that we haven’t mentioned yet about Ariana Maher is just how exciting she can make sound effects. They have a tendency to become part of the action in a scene, exploding outward with a bomb or following the path of a jaw-cracking sucker-punch. Maher takes this talent all the way to the end in Going to the Chapel, providing an immersive layer of sound effects to heighten the reader’s experience right up until the last scene. 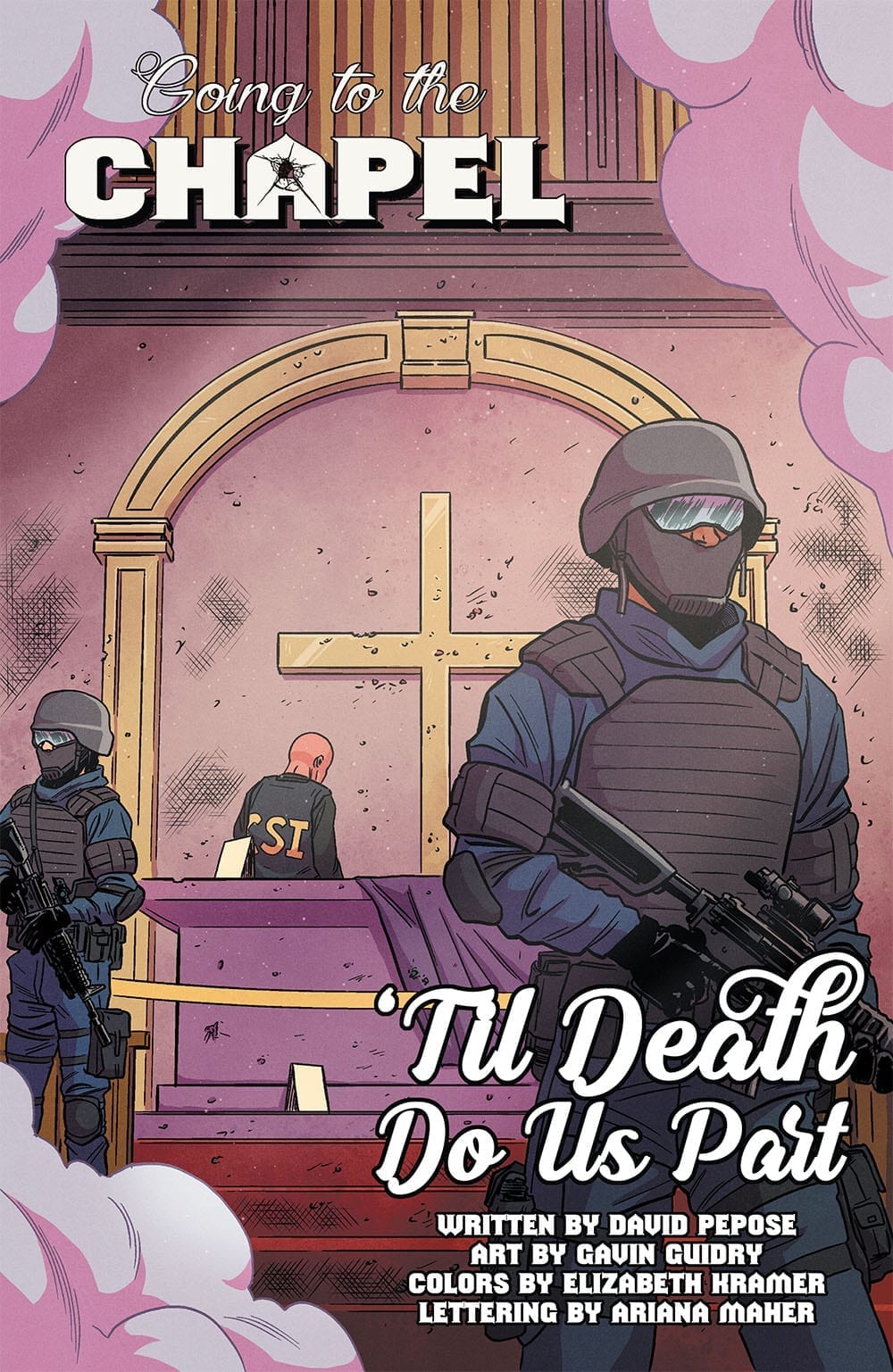 If there was one thing to critique about issue four, it’s just that the ending happened very quickly. This speaks to just how well Going to the Chapel landed as a story. We’ve gotten so emotionally invested in these relatable characters that it feels like there could have been more to their adventure. Still, the final chapter of this comic is an ending that suits the readers needs. It makes total sense but is still unexpected. Our characters get satisfying endings to their arcs. The consequences of their actions come to a pulse-pounding end note. For all the fictional stress that this book put the attendees through, this comic actually had everything that a great wedding ceremony does. That means a ton of laughter, memorable guests, and a hell of a lot of love.

If you’ve been following the series so far, make sure not to miss the finale. But even if you haven’t, all the issues will be available very soon on ComiXology and by order at your local comic shop. Plus, it was just announced that the Going to the Chapel trade paperback would be coming out, appropriately, this coming Valentine’s Day week. However you do it, make sure to get this book. Going to the Chapel was one of the best indie comic experiences of the last year. You’d be missing out if you didn’t try it for yourself.

For more reviews like this one follow us on Twitter. And for all the best comic book reviews, news, and discussion, say tuned to Monkeys Fighting Robots.

Going to the Chapel was one of the best indie comic experiences of 2019, and you'd be missing out if you didn't try it for yourself.Review: GOING TO THE CHAPEL Gets One Hell of a Reception In Issue #4