Review: ‘Til Death’ Gets a Lot More Likely in GOING TO THE CHAPEL #3

We’re willing to bet you’ve been to weddings that you wished you could escape. However, we’d also bet that’s not because of a literal bomb placed at the altar, which is what was happening to the cast of Going to the Chapel Issue 2. Today, issue three continues the exploits of the Bad Elvis gang and their wedding hostages, and just like you before your edgy-humor uncle was about to give a toast, they’re all looking for a way out. Still, they’re about to learn that there are more dangerous things at this wedding than explosives, and more shocking things that can happen to a couple than having their wedding robbed.

Now that we know that gang leader Tom and bride-to-be Emily have a romantic history, Issue Three finally delves into that history, explaining the reason for their break-up years ago. We’ll let you find out for yourself why Tom broke up with Emily over text in Rio, but let’s just say it certainly wasn’t out of cruelty, and just because he broke it off doesn’t mean he wouldn’t rekindle it. Meanwhile, Grandma Harriet has slipped Ambien into Motown’s slice of wedding cake. When the Bad Elvis falls asleep, she picks up his shotgun, ready to relive her Vietnam days. 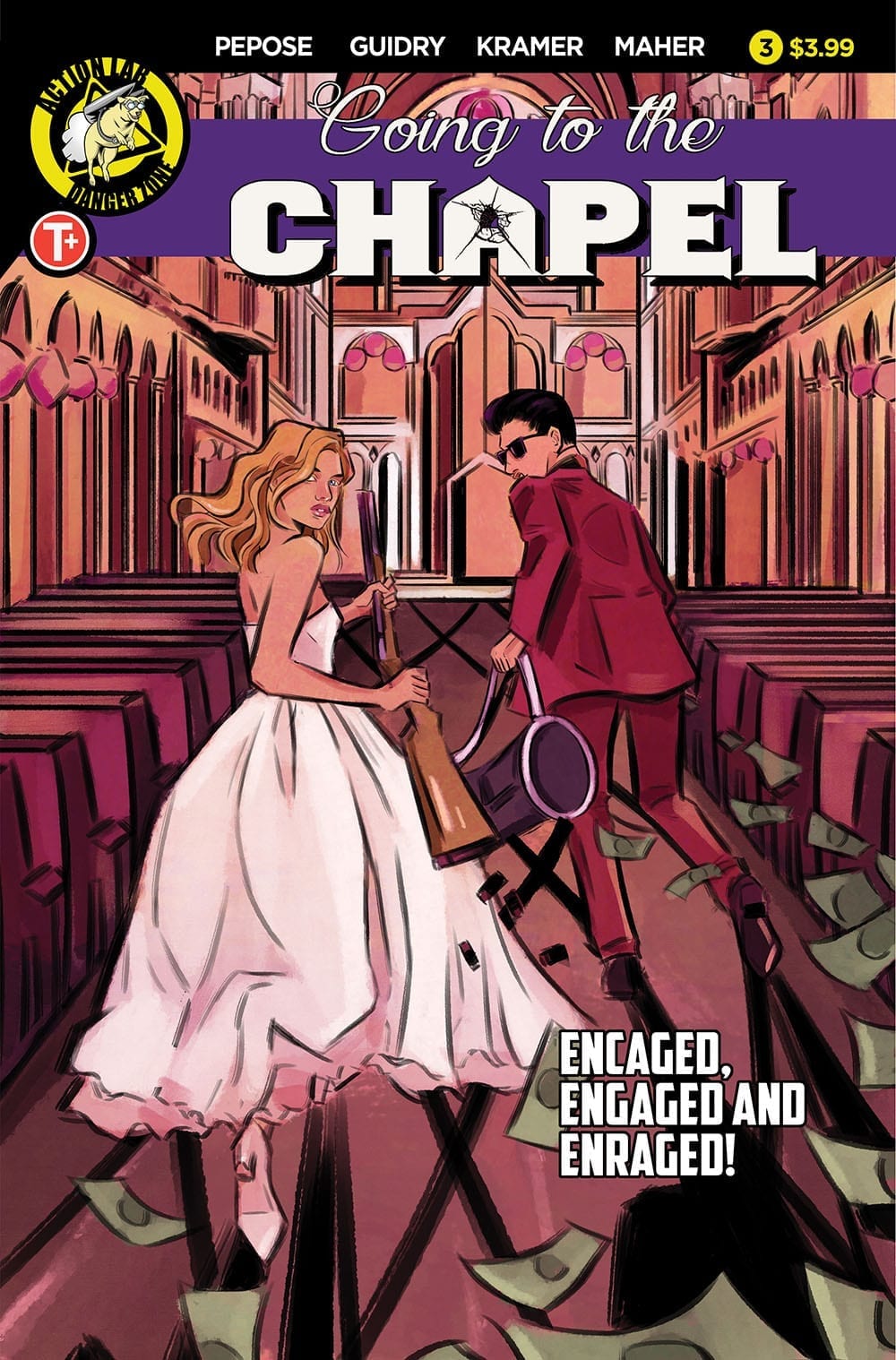 David Pepose has been packing Going to the Chapel with as much action as heart as can fit on a comic book page, and issue 3 is certainly no different. What’s really impressive about this issue, however, is just how high it’s stakes are, how deadly the hostage situation really is. Sure, it was fun to listen to the dysfunctional Anderson clan and Bad Elvis gang trade barbs in issue 2, but now there’s an armed explosive around, and neither side is entirely against doing harm to the other to get away from it. With Emily in the middle of it all, and unsure of whose side she’s actually on, David sets up a particularly heart-pounding and, of course, explosive end. 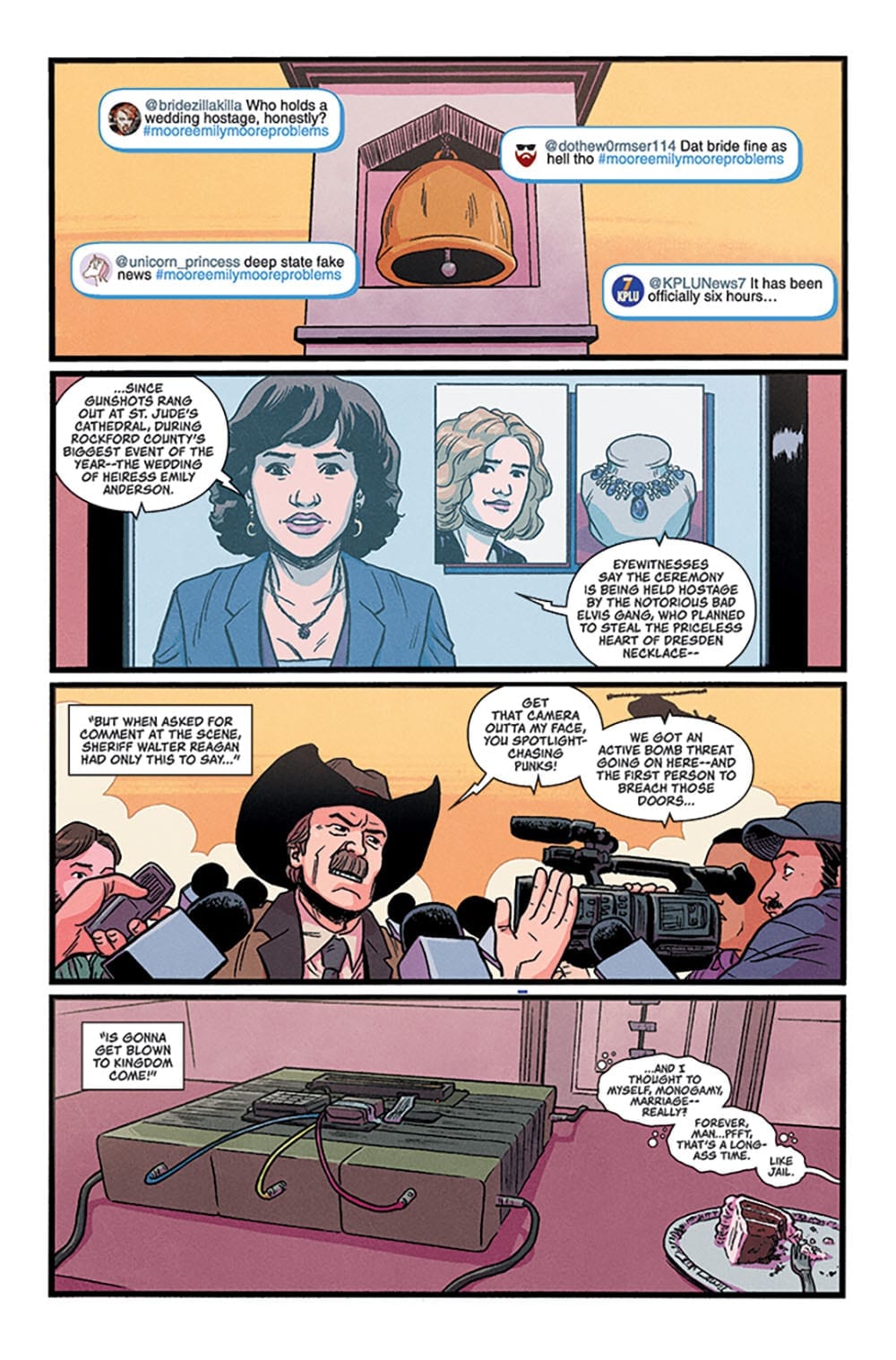 You might recall in our review of Issue 2 how we praised Gavin Guidry’s art to really bring home the humor of the book. While that’s still the case in #3, this issue spent a lot more time reminding us of Gavin’s talent in drawing action sequences (to be fair, his imagery of Grandma Harriet with a shotgun kind of covered both). Gavin’s style is dramatic and locomotive, like a quick zoom-in on the bride in Kill Bill. A lot of that comes from Gavin’s ability to keep the reader’s eye focused, measuring out shots to deliver the most exciting and shocking moments in the book. Going to the Chapel is a book for just about anybody, but Gavin’s art will definitely make sure it pleases action movie fans. 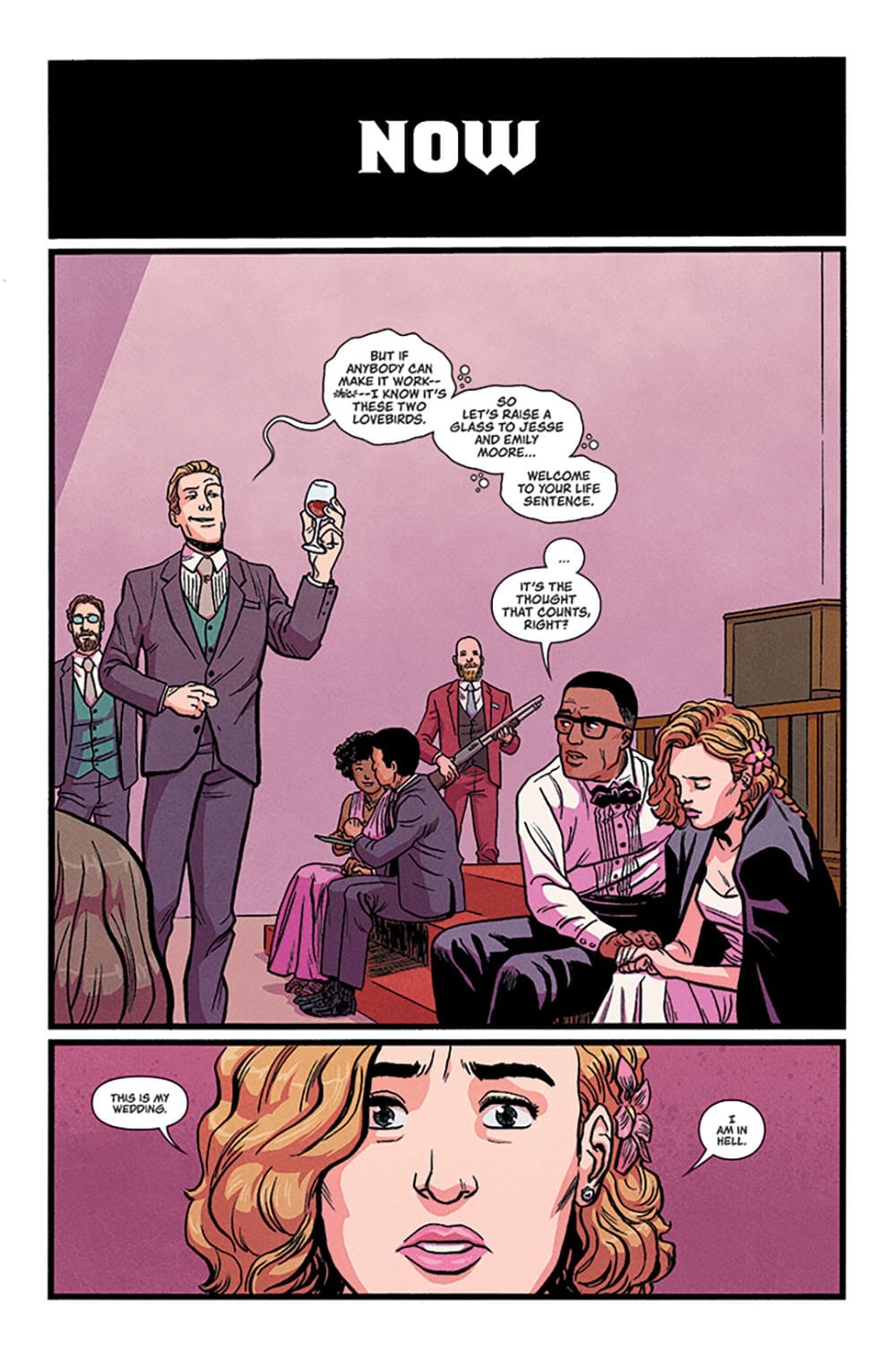 This book reads like a Tarantino-filmed soap opera, and a huge key to making that happen is the coloring by Liz Kramer. Liz has a particular, stylized way of coloring a page, bringing out the emotion of the scene along with the reality. She doesn’t just focus on coloring this book literally, making sure that the lighting is true to the scene (which, side note, it always is), she focuses on letting the colors tell their own story, even if they have to split from photographic realism. Characters glow as much as actual sunlight, their emotions taking on visual form. The result are panels that ooze with drama; you’d know what the tone of a scene is whether you started at the beginning or opened to a random page. 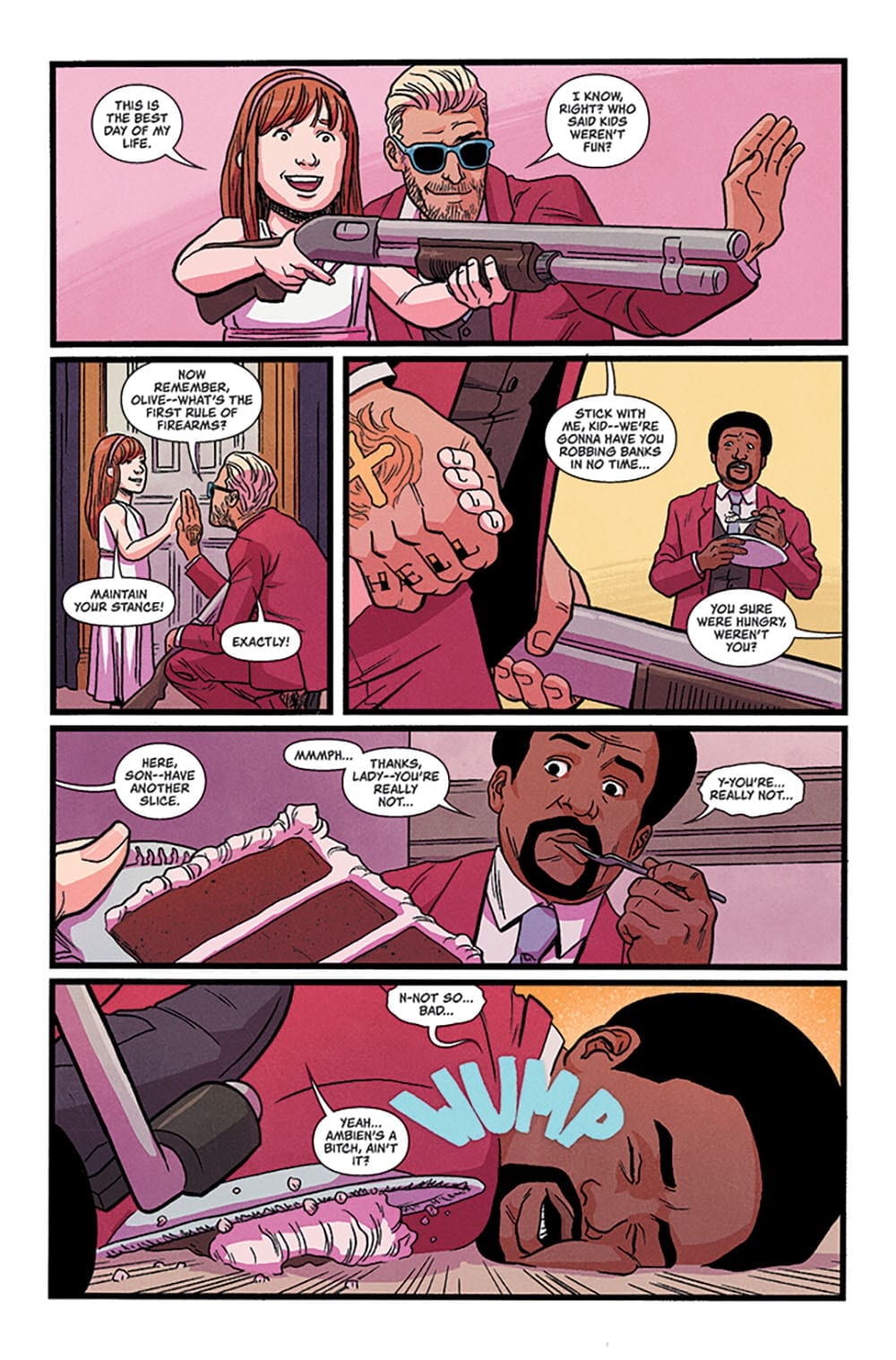 Letterer Ariana Maher once again handles the sounds that Going to the Chapel makes, from heart-stopping explosions to blink-and-you’ll miss it background SFX humor. This issue, Maher also does a great job recording the backing tracks that set the story’s mood. Her social media blurbs scattered around the opening pages are a great introduction to the third issue, reminding us of where we are in the plot and providing some humor in how Twitter might react to a situation like this one. Ariana’s lettering is the foley board of Going to the Chapel. Without it, the reader would have a much harder time getting sucked in. 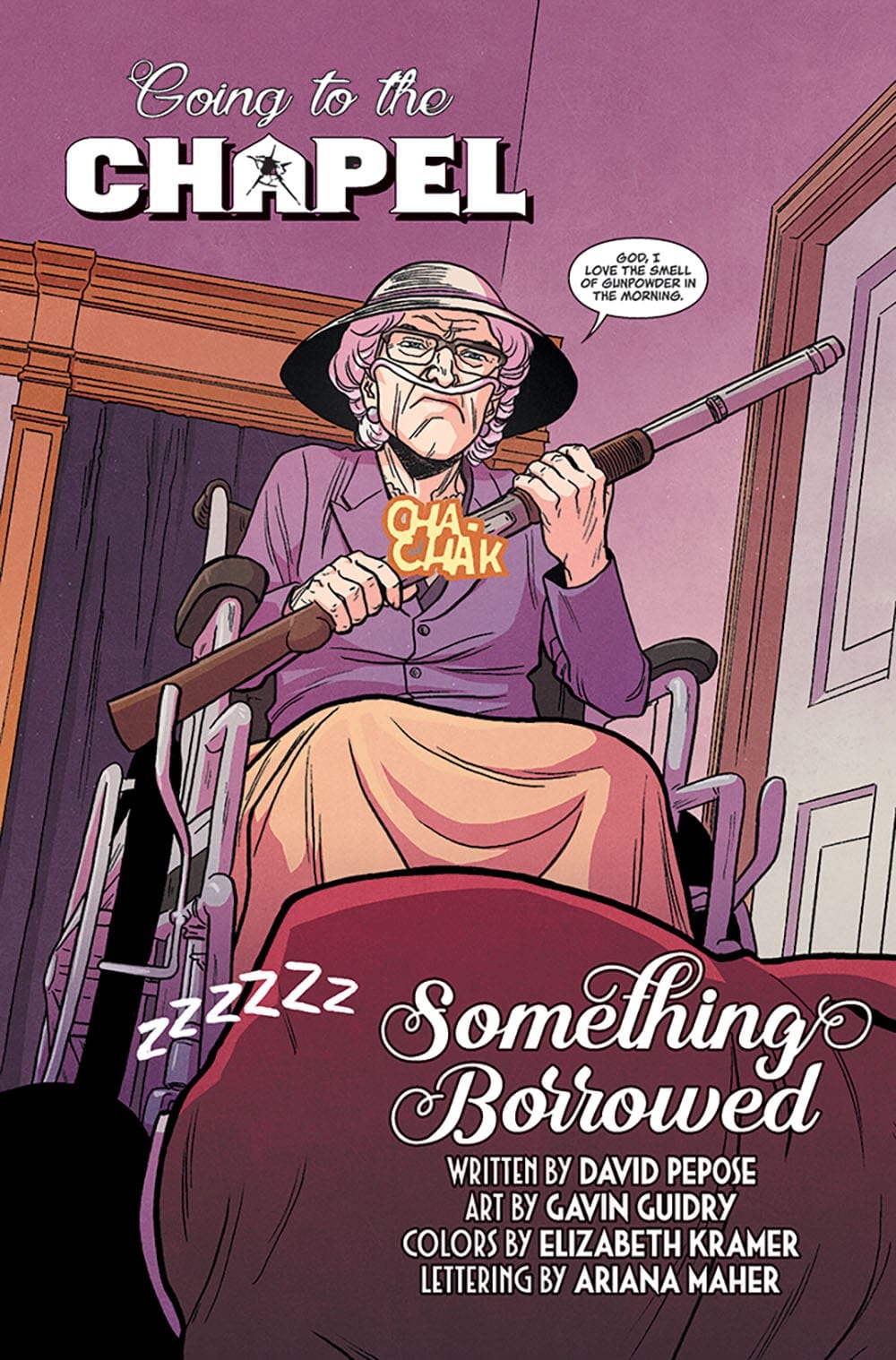 There’s a rich history of non-teen romance in comics, even though we don’t talk about that nearly enough. Love for stories like Young Romance were a heavy influence on Stan Lee, who incorporated romantic subplots into books like Fantastic Four, giving those comics the human touch that the best comics still strive for today. Going to the Chapel is a great reminder that comics are a perfect medium for that type of story, while still satisfying the every need of a modern comic book fan. The book will sadly conclude next month, but we can guarantee it’s not the last we’ve seen of the talented creators, and, with any luck, readers will see more clever, exciting romance like it.

You can pick up Going to the Chapel #3 at your local comic shop and on ComiXology November 6th. For more reviews like this one follow us on Twitter. And for all the best comic book reviews, news, and discussion, say tuned to Monkeys Fighting Robots.

Going to the Chapel acts as a great reminder that the comic format is great for romantic comedies, while still satisfying the every need of a modern comic fan.Review: 'Til Death' Gets a Lot More Likely in GOING TO THE CHAPEL #3