Review: GOING TO THE CHAPEL #2 Keeps the Flame Alive

By Grant DeArmitt
October 23, 2019
Not every comic can make a kiss more explosive than a shotgun, but if you remember the very end of Issue One, you know that Going to the Chapel can. That kiss, shared by a bride-to-be and the thief holding up her wedding, made an already deadly situation even deadlier, but fans of the latest Action Lab series were left in the dark as to why it was happening. With Issue Two, the Going to the Chapel team explores the complicated, dangerous past that lead to that kiss, and the disaster it’s making in the present. 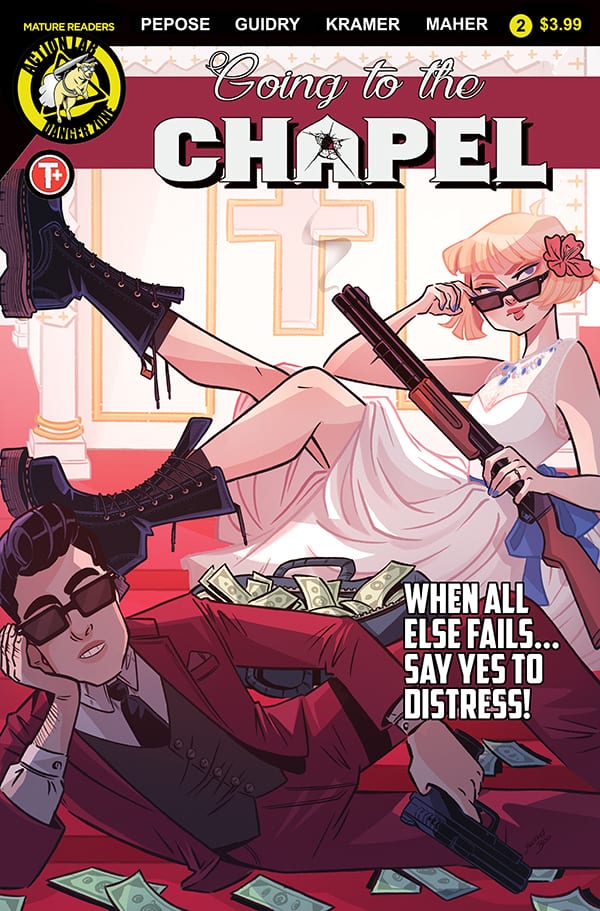 As it turns out, Emily and Tom have a romantic history, one that ended very badly. Now, Emily is not only unsure of how she feels about Tom now that he’s back, but his presence is reminding her of how unsure she is of marrying her fiancé, Jesse. Meanwhile, tensions are building in the chapel’s main room, where the Bad Elvis gang is seriously regretting holding the dysfunctional Anderson family hostage. The robbers have firearms, sure, but a rifle isn’t much compared to Grandma Harriet’s attitude. If that’s not bad enough, bridesmaid Natalie has an un-confiscated phone on her, capable of giving the cops outside a leg up. If, of course, she can stay off Instagram.

Writer David Pepose has a unique gift for crafting lovable characters and writing great, exciting action sequences for them to play a part in. He could get you to appreciate a friendship in the midst of a speed of chase. Going to the Chapel #2 is a great example of his talent in the way he fleshes out the people that attend and complicate this wedding, without losing focus on the main character arcs. The Bermuda’s Love Triangle of Tom, Emily, and Jesse is still front and center, and as the saying goes, it’s causing them to make some very stupid choices. 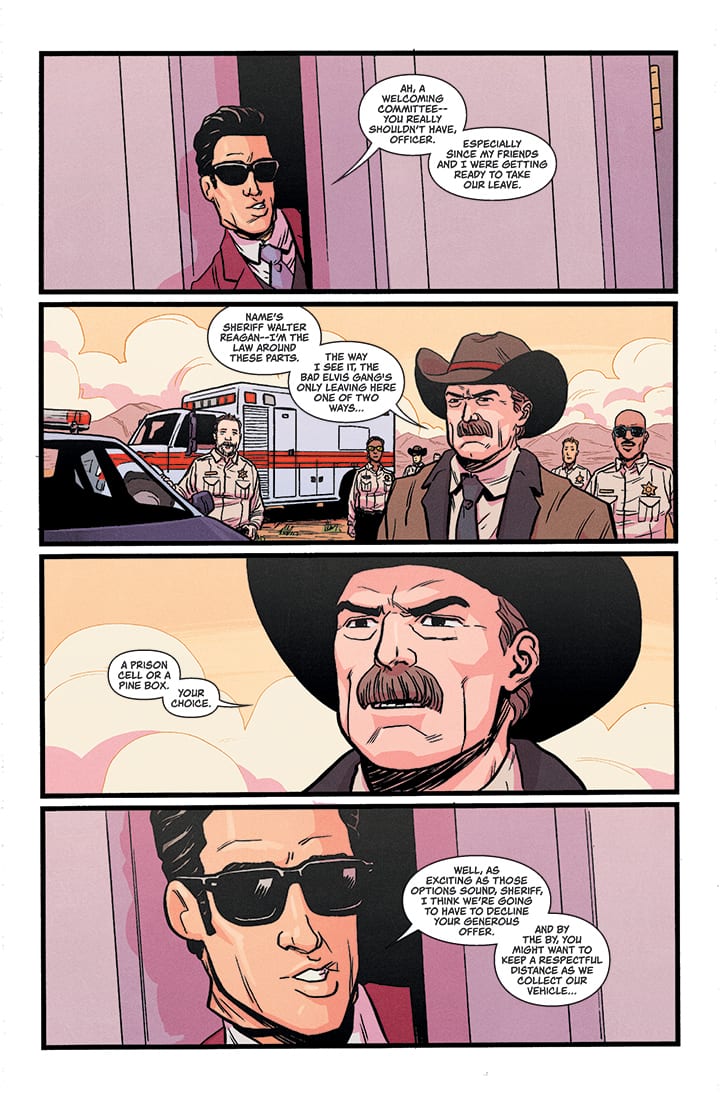 Those choices lead to an incredibly tense, white-knuckled action sequence at the close of the comic, with edge-of-your-set visuals good enough for any Quentin Tarantino fan. The pencil behind those visuals is Gavin Guidry, whose choreography of the blockbuster scenes provides the fun and danger of this comic. Like a good symphony, Guidry’s art can thrill by either going big or by staying small; in the moments when nothing’s exploding, the tension on his characters’ faces is enough to string along the reader. But Gavin’s work doesn’t just shine in tense moments. Much of the humor of the book rests on his shoulders, brought to life in the small actions and reactions he gives his characters. Gavin could draw his way around a scene from the A-Team, sure, but he could also rock the hell out of a cold open on The Office. 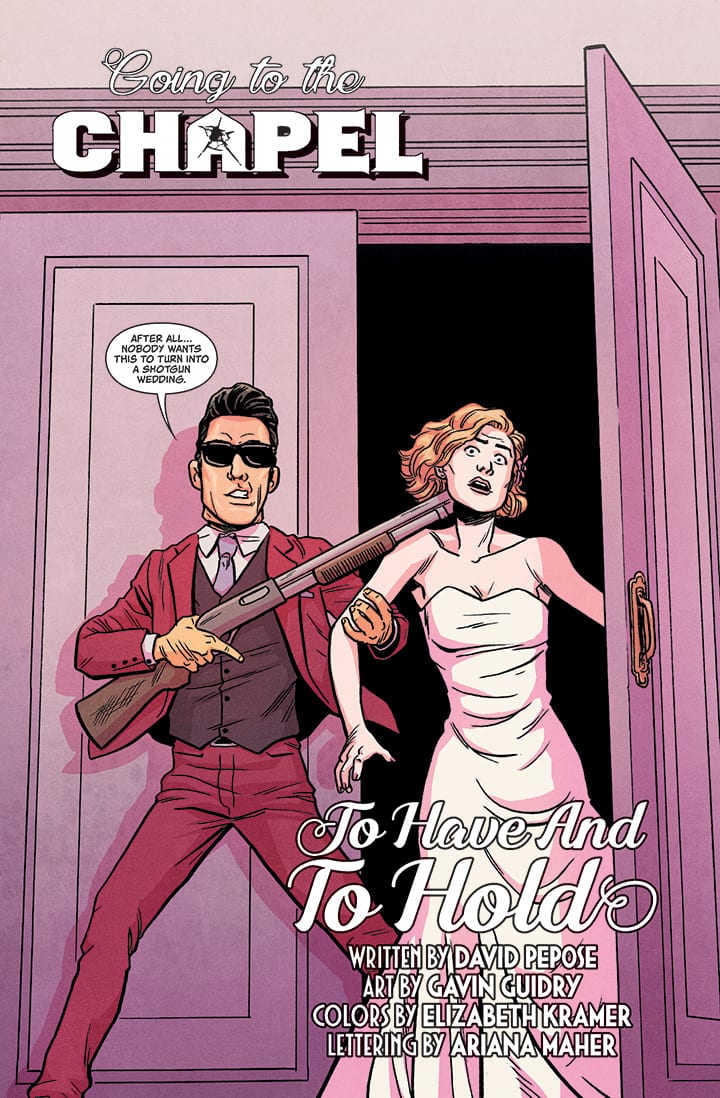 Providing the vibe for this comic is colorist Liz Kramer, whose sunset tones give this book its warm, seventies detective TV vibes. Liz’s choice to give everything a soft glow anchors the emotion of the page for the reader. In flashback scenes of Emily and Jesse’s engagement, Liz set the stage for what could be a romantic night in Paris. In the climactic sequence at the end, she paints the scene like something straight out of a Wild West shootout. If David’s writing gives this comic its action and Gavin’s art its humor, you can credit Kramer’s skill in coloring for its soul. 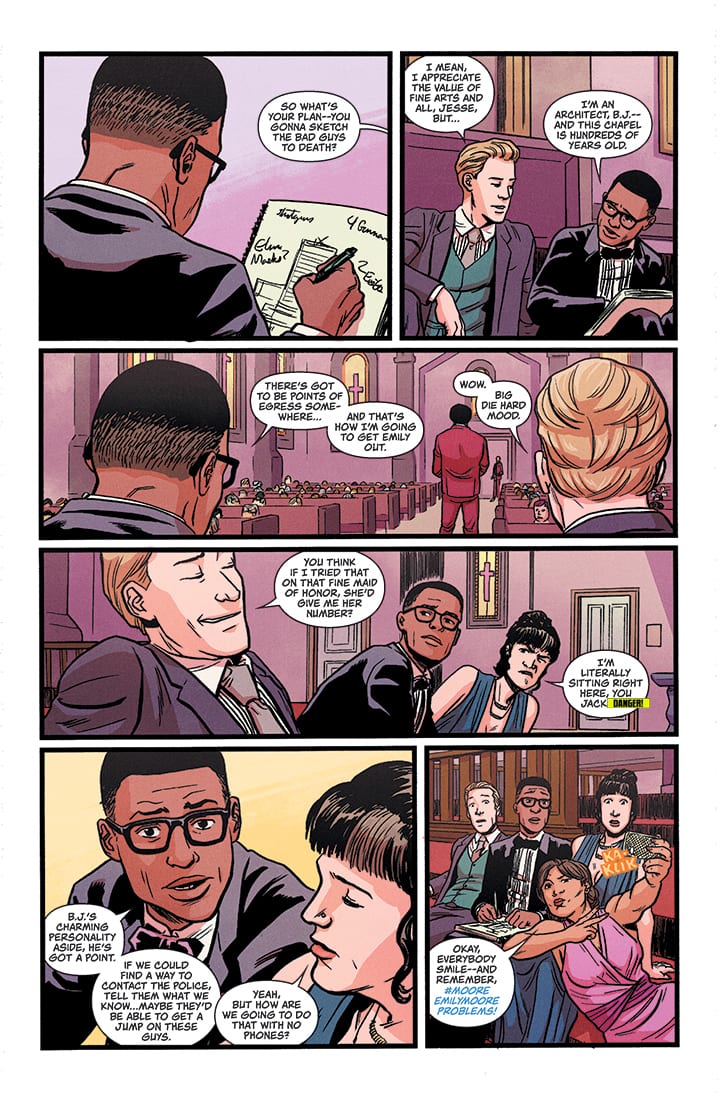 Bringing it all home is Ariana Maher’s lettering, which plays a big part in how smoothly this comic reads. There’s a uniformly laid back texture to Ariana’s words that can transition between small, whispered lines and loud exclamations easily and without changing so much to distract a reader. Plus, music is very important to this book, and without Ariana’s way of working its lyrics onto the page, we wouldn’t have the great mental soundtrack that helps this comic work. Like any great comic, a soundtrack is very important in Going to the Chapel. 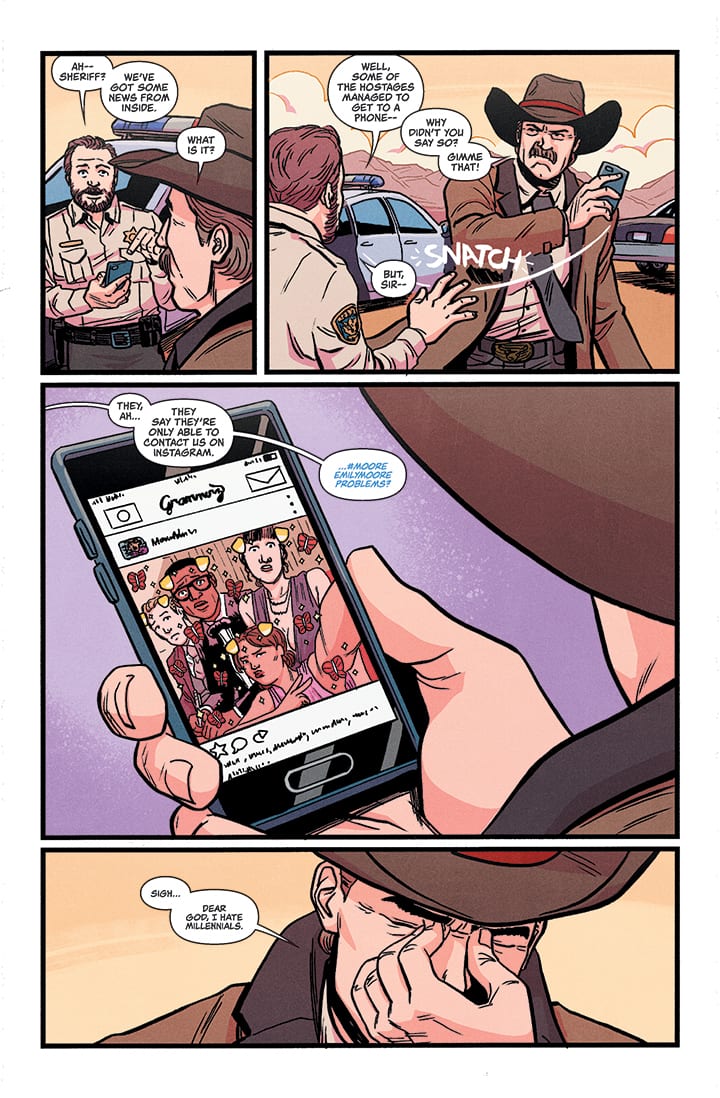 Look at at a lot of major comic publishers right now, and you’ll see that so many are focused on cross-company storytelling. There’s nothing wrong with that; we all love a good major event from the Big Two, as all the Absolute Carnage reviews you’re seeing now will tell you. However, there’s a special quality to a comic that is self-contained, one that puts character over crossover and soul over spinoffs. That’s what Action Lab has with Going to the Chapel, backed up by some true masters of the craft and a strangely relatable story. After all, who hasn’t been to a terrible wedding?
****
You can pick up Going to the Chapel at your local comic shop and on ComiXology October 23rd. For more reviews like this one follow us on Twitter. And for all the best comic book reviews, news, and discussion, say tuned to Monkeys Fighting Robots.
2546
Share
Facebook
Twitter
Pinterest
WhatsApp