Review: GOING TO THE CHAPEL #1 Is “Wedding Crashers” By Way Of Tarantino

"LOVE IS THE ULTIMATE HOSTAGE SITUATION"

Going to the Chapel #1 is out this week from Action Lab: Danger Zone, and it gives a whole new meaning to “wedding crashing.”

Emily Anderson is having second thoughts about getting married, but her troubles quickly worsen when her wedding is hijacked by a gang of Elvis-themed bank robbers. With her dysfunctional family on one side and the thieves on the other, Emily has to try and take control of her own hostage situation and maybe get out of walking down the aisle at the same time. The series is by writer David Pepose (Spencer & Locke) and artist Gavin Guidry (The Death Defying), with colors by Liz Kramer and lettering by Ariana Maher.

We actually got the chance to speak with Pepose a few months back about Chapel if you’re interested in how the series came together. It’s the author’s take on the rom-com, a genre he feels gets a bad rap. As he said in a different interview, “I think rom-coms are just as flexible of a genre as crime or science fiction. And so I wanted to write something that I thought I would really like to read, that both men and women would enjoy and have a lot of fun reading.” 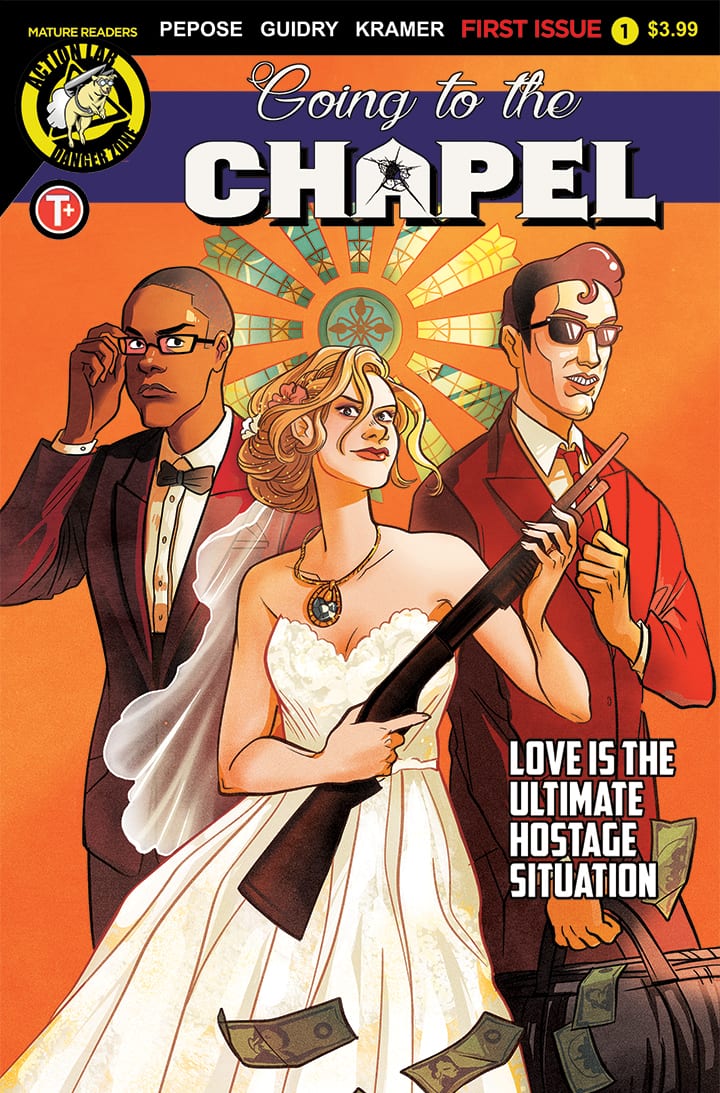 The comic reads a lot like a Tarantino story, with its unique and eccentric characters and neo-western setting. Going to the Chapel takes place almost exclusively in the titular church, and the single setting gives the story a sense of claustrophobia and heightened tension. It feels very cinematic, especially with the way Guidry frames the shots. Most of these panels could easily be torn directly from page to screen (if a film were to ever happen).

This hostage situation isn’t all grim and gritty, though. Chapel is actually a pretty lighthearted and fun comic, which you can feel between Guidry’s cartoony style (not in the “Sunday Funnies” kind of way, but just simple, not heavily-detailed linework), Maher’s big sound effects, and Kramer’s pastel color palette. There are a lot of pinks, purples, and yellows throughout this comic to drive home the romance element, which is interesting when coupled with the action happening on the page. This juxtaposition tickles your brain and draws you further into the story.

Pepose infuses Going to the Chapel with plenty of absurd comedy as well. There’s absurdity inherent to the plot, sure, but the real humor comes from the family dysfunction element. The Andersons make the Bluth family look tame by comparison and they’ll have you laughing out loud, especially Grandma Harriet (stick around to the end of this review to get some of grandma’s advice firsthand in an extended preview). 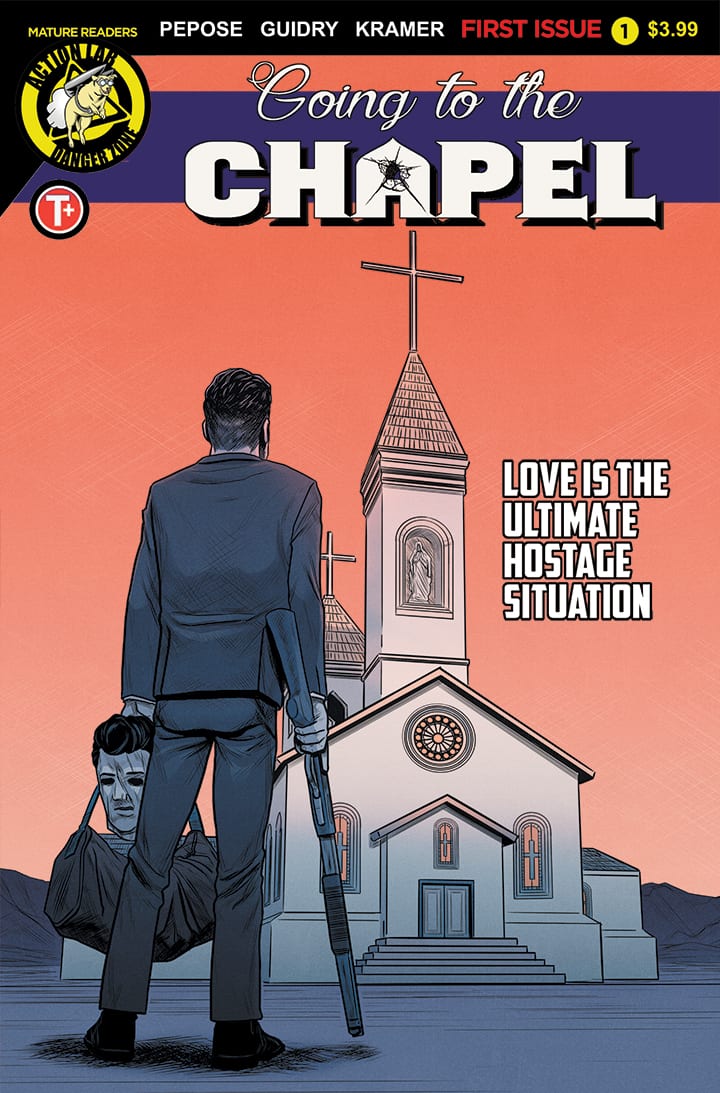 Through all the crime and craziness, though, this is a comic with lots of heart. Don’t let the Elvis masks fool you. It ultimately is a love story. It’s about relationships, family, happiness, and way more. Just like he did with Spencer & Locke, Pepose is a master at lowering your guard with some zany antics and then smacking you upside the head with some “feels.”

And then the team drops a few bombs that adds a whole new element to this series: mystery. You’ll turn the last page and your brain will start turning with all sorts of theories that won’t go away until you get your hands on issue two. The key to comics – to any kind of entertainment, really – is “never be boring.” Always keep your audience engaged and wanting more. This creative team understands that.

Going to the Chapel has already drawn comparisons to Die Hard, Runaway Bride, and Arrested Development. Don’t you think you owe it to yourself to get in on such a unique and fun reading experience?

Are you looking forward to Going to the Chapel? Did you already get your hands on a copy at a convention? Sound off in the comments with your thoughts! 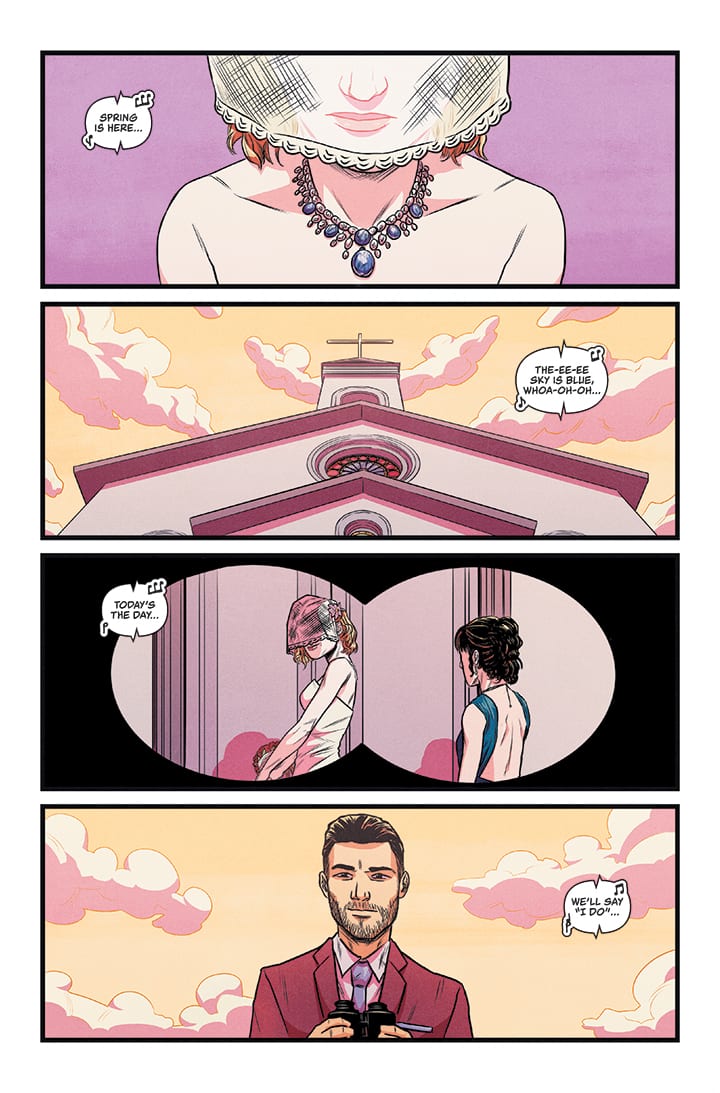 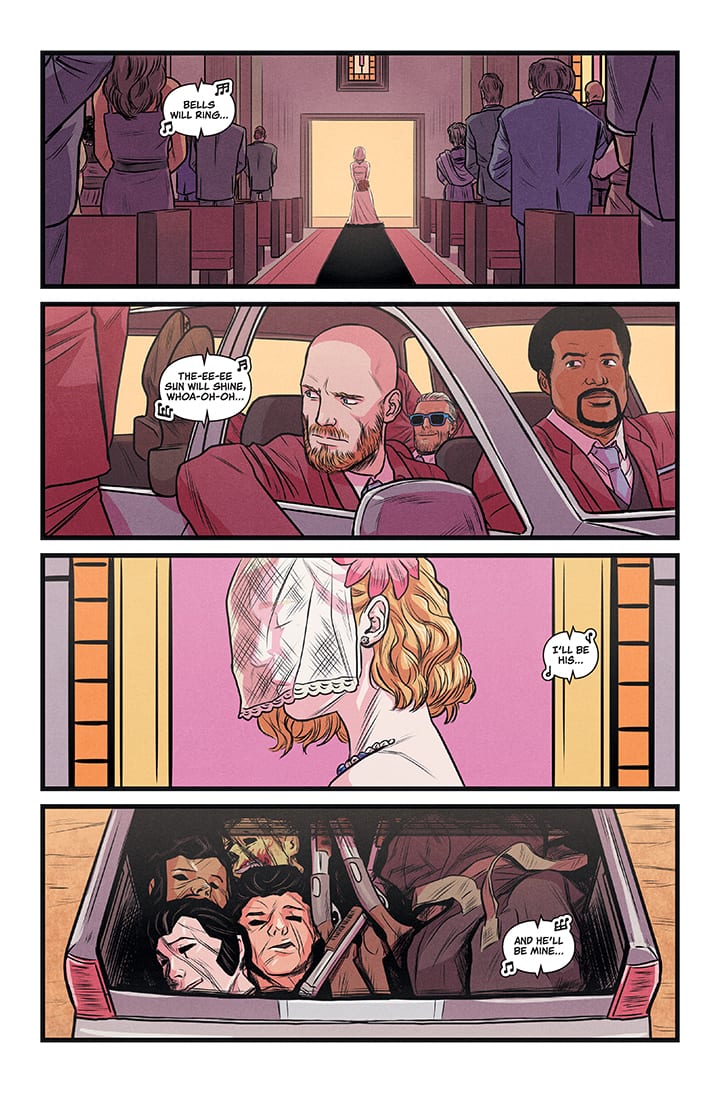 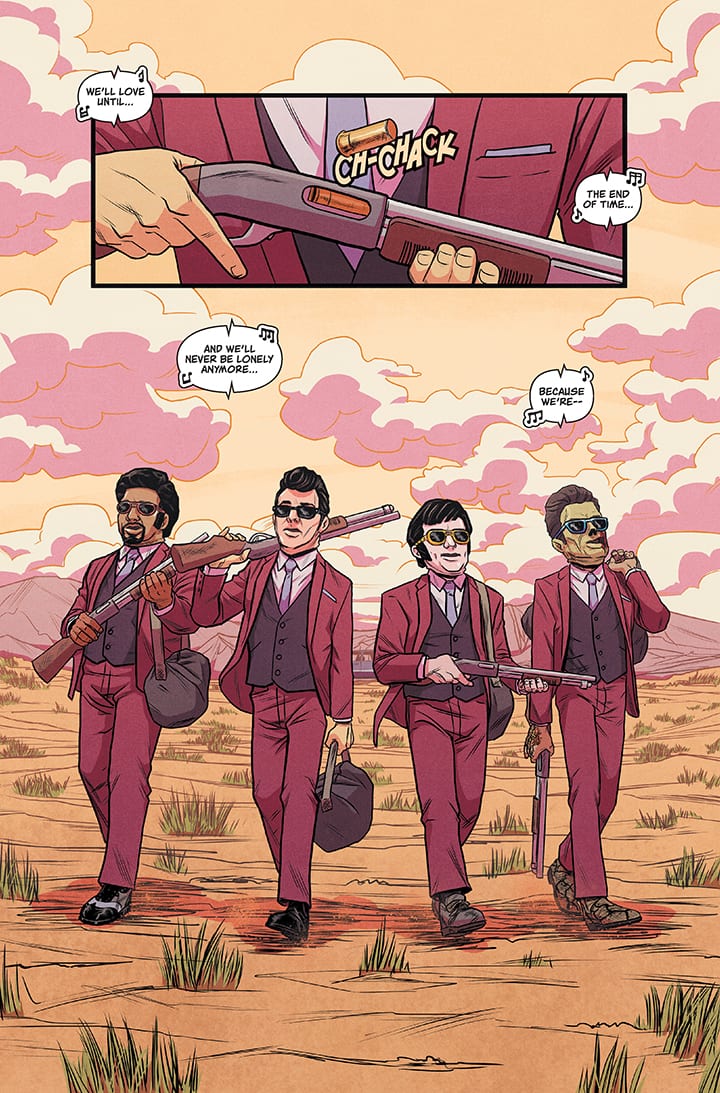 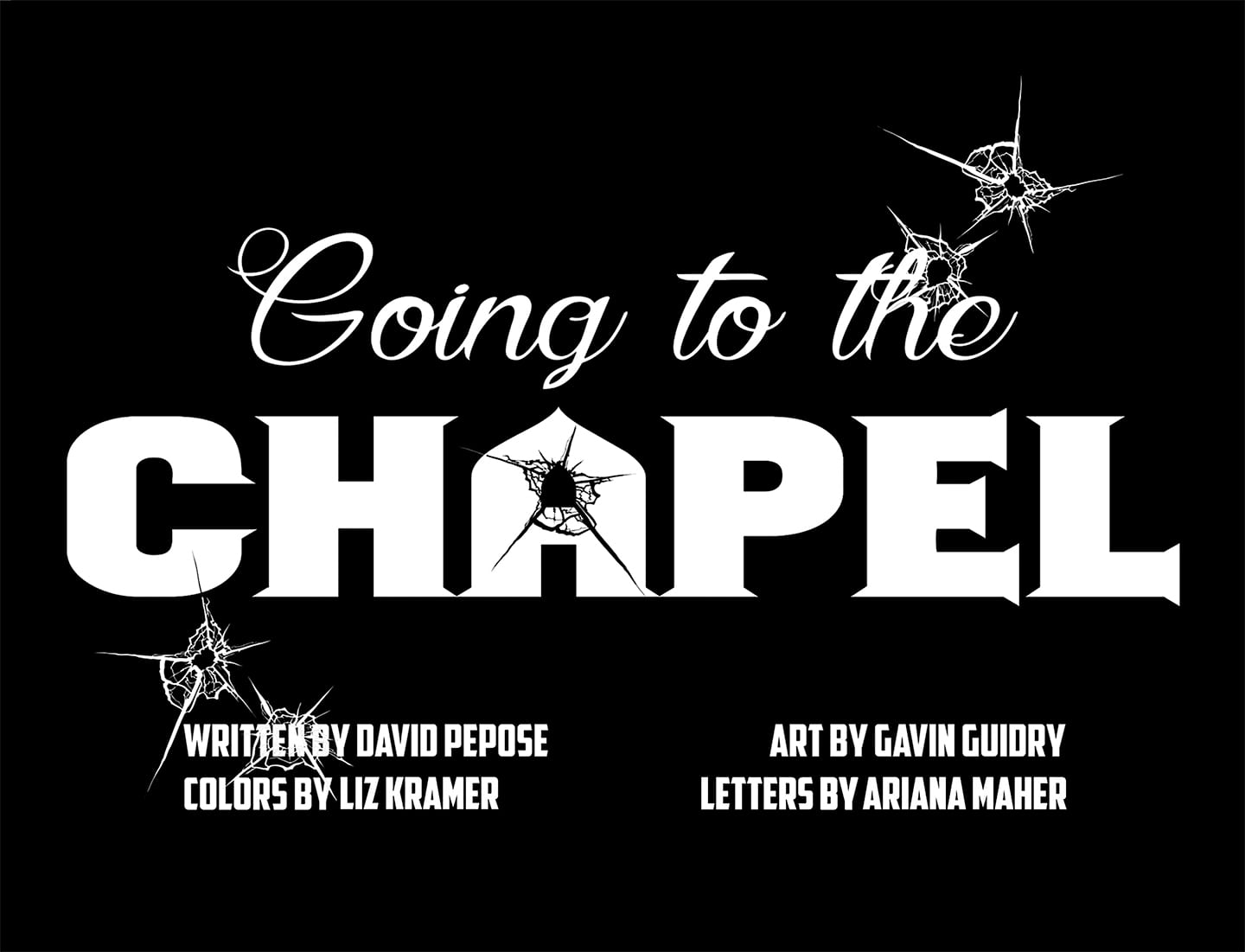 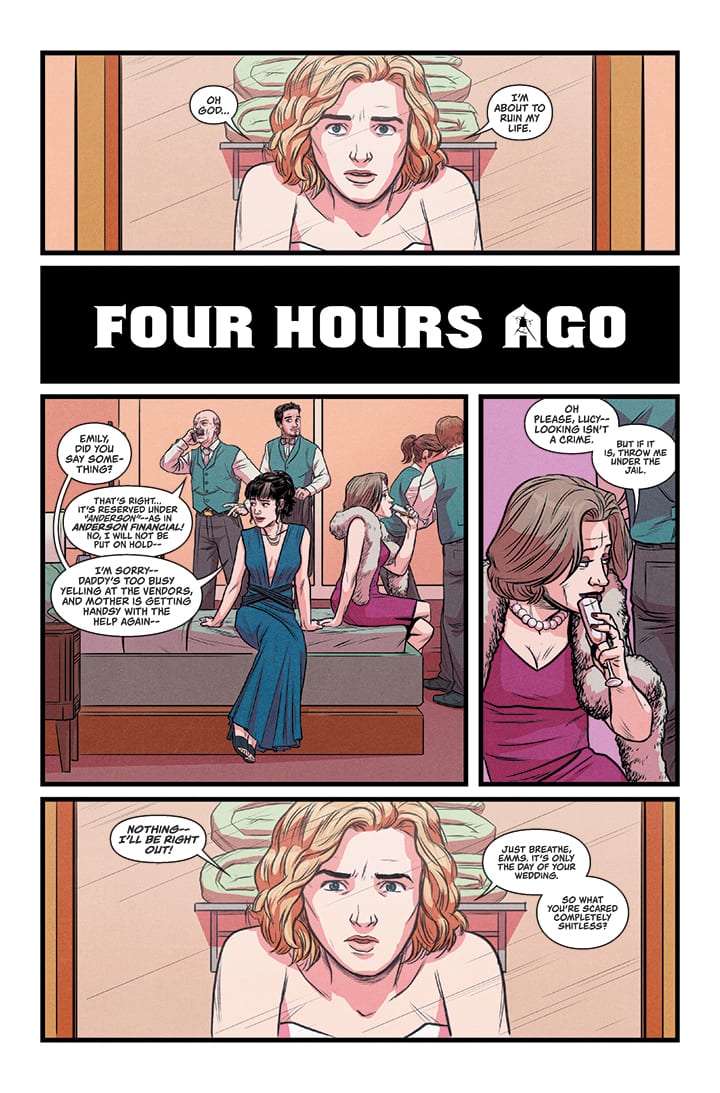 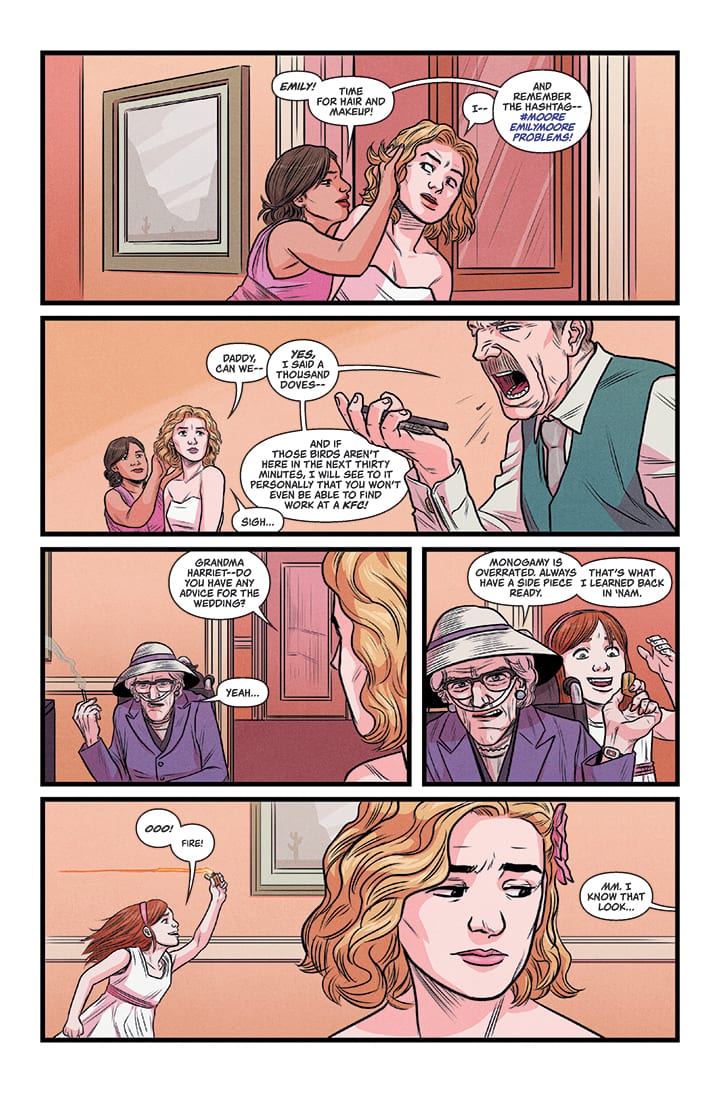 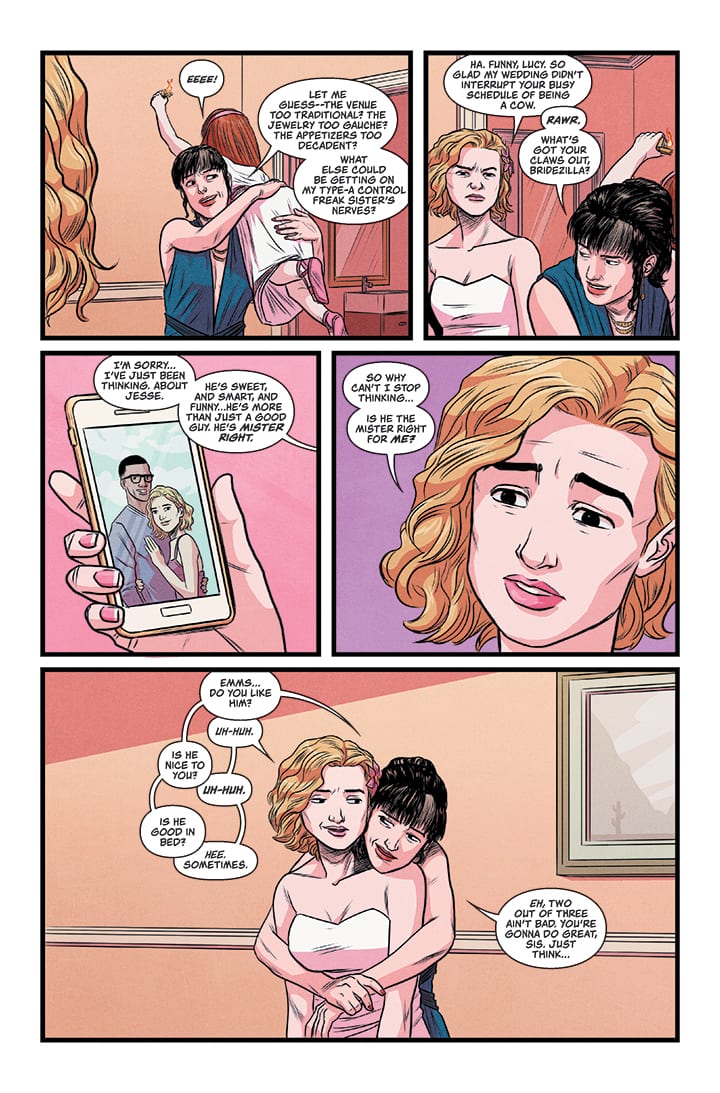 GOING TO THE CHAPEL reads a lot like a Tarantino story, with its unique and eccentric characters and neo-western setting. Through all the crime and craziness, though, this is a comic with lots of heart.Review: GOING TO THE CHAPEL #1 Is “Wedding Crashers” By Way Of Tarantino