Review: HOUSE OF X #6 – Poor Apocalypse Has No Friends

The living island becomes home to a thriving mutant society in House of X #6 out this week from Marvel.

Jonathan Hickman is the man behind the charts. Pepe Larraz is the young gun artist helping shape the world of Hickman’s X-Men. Marte Garcia and David Curiel add the pearlescent purples and beautiful blues to the Krakoan oasis. The celebration on Krakoa radiates off the page as any mutant with visual powers are showing off what they can do. There’s probably a reason this issue uses multiple color artists; it looks like it was an absolute BLAST! (hehe)

VC’s Clayton Cowles reigns over the letters in House of X #6. This chapter is mostly a voice over, so Cowles doesn’t have much to do here except word bubbles, and lots of them. His standout moment is providing a fantastically drawn scream swirling down a pit into exile. 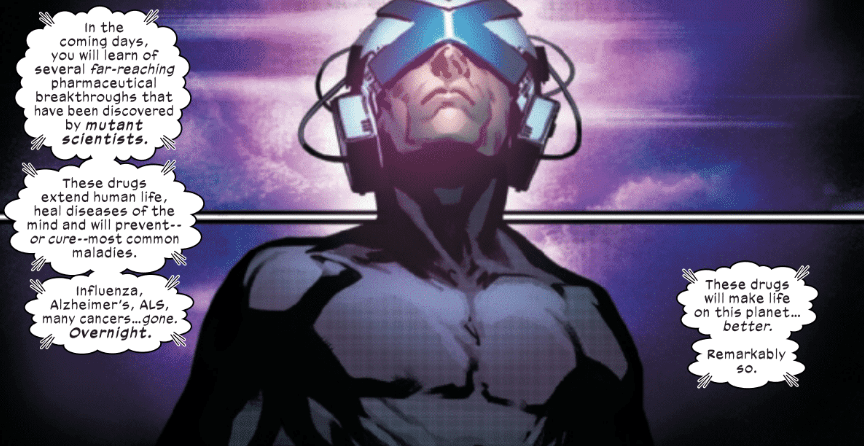 While this issue takes place mostly on Krakoa, the art team was able to flex and show us just how breathtaking the living island is. If you’re a living island, I would hope for some beautiful landscapes and lush terrain, and Krakoa is precisely that. It looks like a place that will make the world jealous that they can’t visit for summer vacation. Jealousy never leads to anything great.

No society functions without rules, laws, and ideals. House of X #6 establishes the basic goals and beliefs of mutants moving forward. The Quiet Council of Krakoa is made up of mutants with all different motivations, and each group appears to get an equal voice. The excitement I have for a future with a council consisting of the likes of Sinister, Apocalypse, and Sebastian Shaw is just indescribable. The guaranteed tension during debates that Hickman has opened the door for is going to be some must-read material.

After the first meeting of the council, the celebration of everything they have created begins. In scenes reminiscent of Return of the Jedi, mutants are throwing the party of their lives. Fireworks and other visual spectacles provided by the powers of overjoyed mutants light the skies above Krakoa. Old friends embrace and join together in laughter, children gather around the fire for tales of wonder, libations are shared amongst past enemies, and everyone seems to be embracing the new path that has been laid out before them.

Apocalypse does not look like someone that has just accomplished his life’s work. He sits alone in the darkness while everyone else celebrates. Is he rethinking his stance? Is he plotting for when the humans inevitably come to destroy what they have? Has he simply spent so much of his life causing others pain that he just has no one that cares about him? Is it all of the above? We will have to wait to find out. I hope the future sees Apocalypse asking Wolverine how to make friends.

As we have learned through this series, Powers of X shows us the outcomes of the events in House of X. Xavier and company have implemented their plan and have begun the transition into the new order, but what awaits them? Will the plan bring them the utopia they dream of, or will it unravel right in front of them? 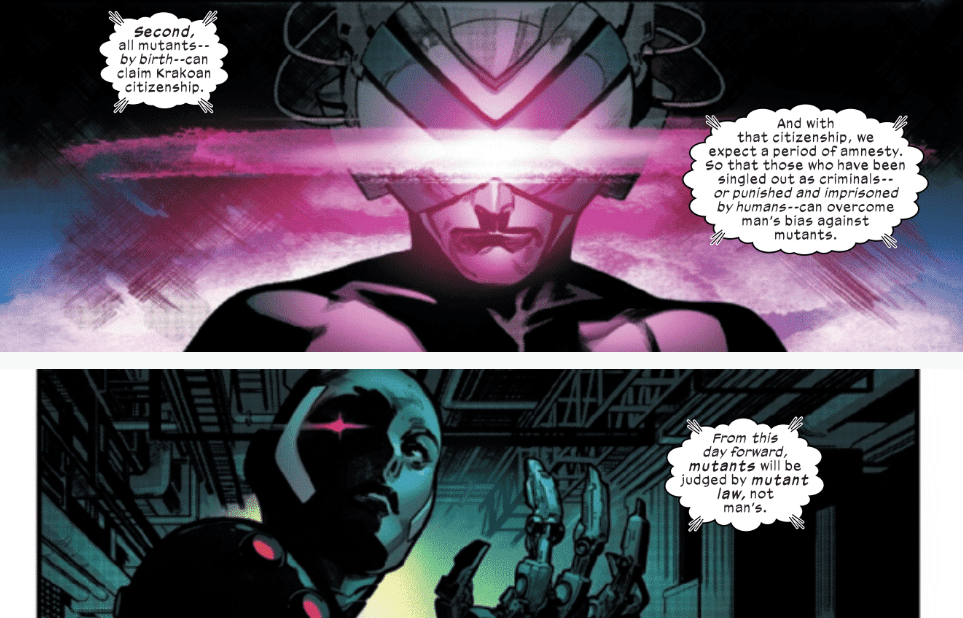 With the last Powers of X issue heavy with information about machine societies, it only seems fitting that the finale will be right after mutants have established their lives on Krakoa. I think nano sentinels will infect Krakoa, and since “Make More Mutants” is one of the three laws, mutants will reproduce omega sentinels at alarming rates, and the machines will implode into a black hole.

What did you think of the end of House of X? What do you think will happen in the Powers of X finale? Let us know in the comments below.

Review: HOUSE OF X #6 - Poor Apocalypse Has No FriendsDaaaaaang