Written by Robert Venditti, with pencils by Fernando Pasarin, inks by Oclair Albert and Wade Von Grawbadger, colors by Jeromy Cox, and letters by Rob Leigh, DC Comics’ Hawkman #27 captures the feel and style of a 1940s comic brilliantly. This creative team is writing an ode to the Golden Age, and having fun doing it.

Venditti shines a light on all the things we love about old comics in Hawkman #27. We have all the classic DC characters of the 1940s, along with some truly cheesy repartee. Venditti centers most of the issue around a fight between the Justice and Injustice Societies. We get a moment, typical to Golden and Silver Age comics, where it looks like the villains have won. It’s closely followed by the heroes winning in a Deux Ex Machina moment, explained away by the simple fact that they knew the villains would act as they did. On their own, these are all elements of bad writing, but when recreating the feel of a Golden Age comic, it’s perfect. Venditti is reminding us of the days that these writing flaws were common, even charming. It takes a truly skilled writer to implement bad writing techniques well. Thank God Venditti is truly skilled. 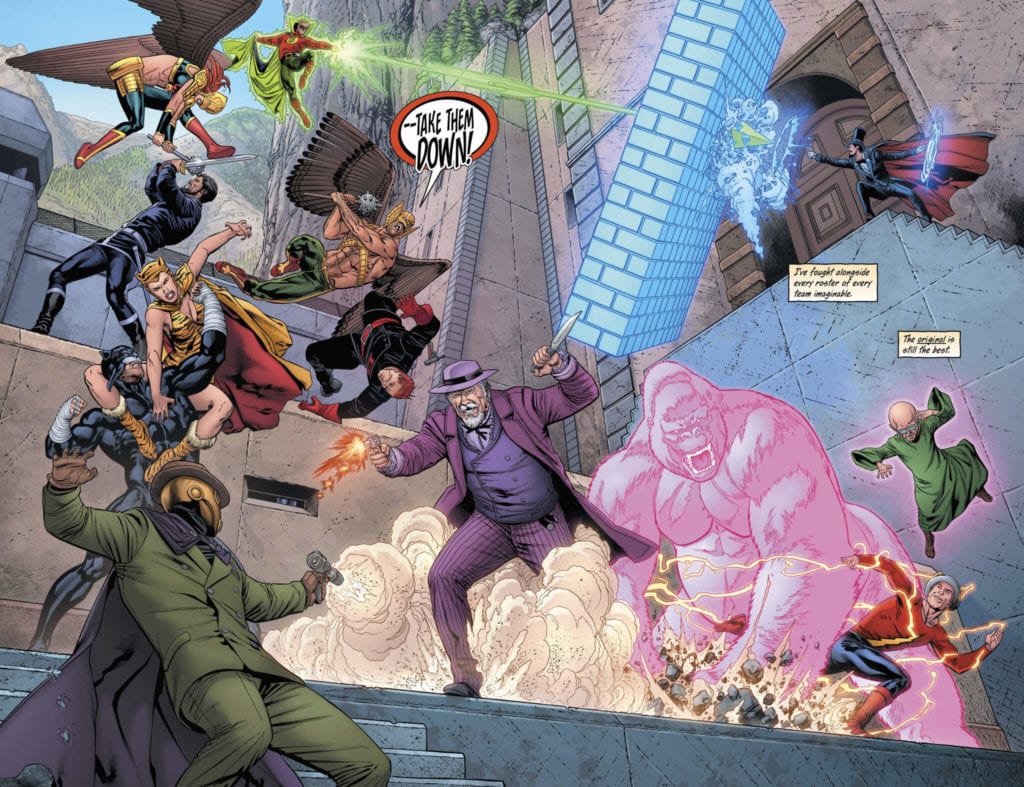 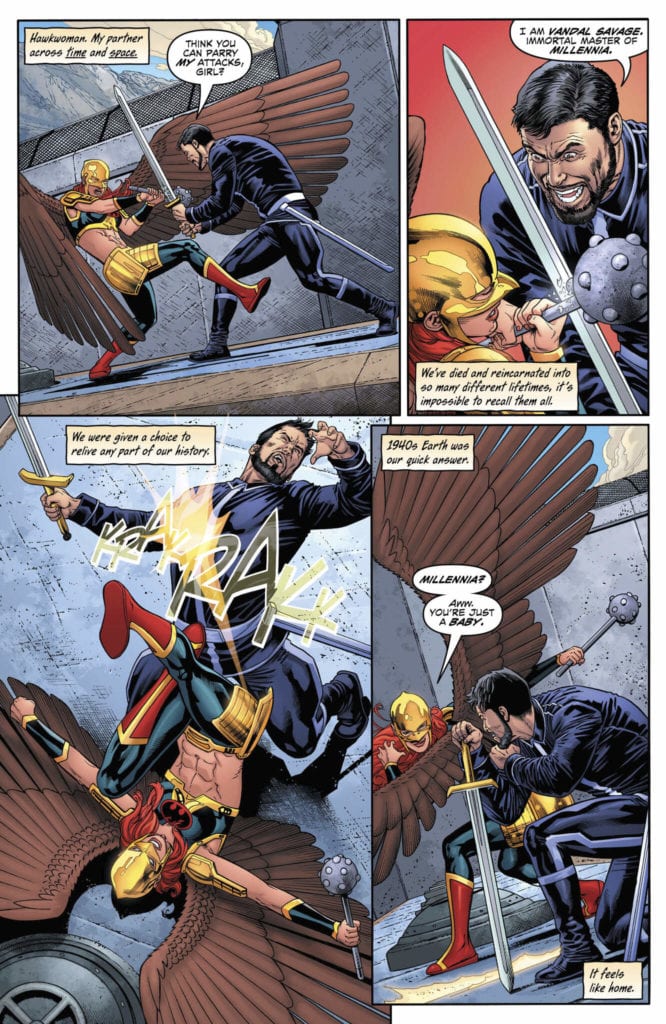 Cox goes back to basics. He’s coloring a comic to look classic, so a lot of the colors are what you would expect. Hawkman is in a red panel, filled with rage. Separately, we see a scene set in a mysterious location, and the blue makes the scene feel foreboding. Red is danger or anger; blue is foreboding and melancholy. But Cox also uses his colors to make the page just look great. Sandman and the Gambler look like they coordinated before the fight. The Wizard’s blue projections wrap around the green objects Alan Scott is creating with his wring. Cox helps us feel the fun of the fight by creating a page that pops.

Leigh letters his sound effects in a pretty simple style in this issue. Normally, Leigh’s sound effects in Hawkman are diverse. But in this issue, he keeps things uniform. Every sound tends to have the same font in a different color or size. Leigh is referencing old comics when sound effects were uniform and not even written in block letters. Every sound effect looked the same. But when Hawkman and Hawkwoman’s maces get rammed into each other, the resulting explosion makes a different sound. The letters are messy and look scribbled onto the page. With this, Leigh is telling us that these two, and the power they bring with them, are beyond this plane of existence. They aren’t quite like everyone else they know live with, and even the sounds they make look different on the page.

Hawkman #27, out from DC Comics September 8th, is a great way to jump back into the 40s. It has the charming simplicity of a comic from the Golden Age and the self-awareness of a modern work. This creative team has made a really fun issue; hopefully there will be more along these lines. Pick up DC Comics’ Hawkman #27 from a comic shop near you!

DC Comics' HAWKMAN #27 is this creative team's ode to the Golden Age of comics. It's a fun time, that's hopefully the first of many.REVIEW: HAWKMAN #27 Captures Time in a Bottle