On July 15, Marvel Comics released their second Giant-Size X-Men issue: Giant-Size X-Men – Magneto #1, written by Jonathan Hickman. With art by Ramón Perez, colors by David Curiel, letters by VC’s Clayton Cowles, and design work by Tom Muller, this issue serves to plant the seeds for what are no doubt more mysteries and plot points in Hickman and company’s grand X-narrative.

I’m a bit confused about the point of these giant-size character-focused issues. This issue focuses on Magneto certainly more than Giant-Size X-Men – Nightcrawler focused on Kurt, but I question the need to have labeled them “Nightcrawler” or “Magneto.” Normally, naming issues in such a way usually means a deep dive into an individual character, their struggles, and their psyche. This issue, like the last one, certainly utilizes the title character, but as a part of a small ensemble that seems to be laying the groundwork for future plots more than really addressing the depth of the characters themselves.

Being a fan of Hickman’s work, I know that many of the plot threads he’s planted during his time as the “Head of X” will eventually come back around in significant ways. As big of a world as the X-titles have become; however, I just wonder if all of the mystery and plot-seeding will pay off. What is the significance of the new island Emma Frost got Magneto to help her acquire from Namor? Will the weird Kraken people under the sea re-emerge at a later time? I don’t know, but at this point, all the building up needs to pay off soon, hopefully with X of Swords.

The art for this book is great. Perez is able to communicate a lot about Magneto’s character by how he draws him. As Magneto stares at the water, Perez captures his contemplative mood, the mood of a man who is comfortable in his own skin and seems to be enjoying a moment of repose as he waits for Namor. At other times, Perez can capture a bit of often-unseen joviality on Magneto’s part. 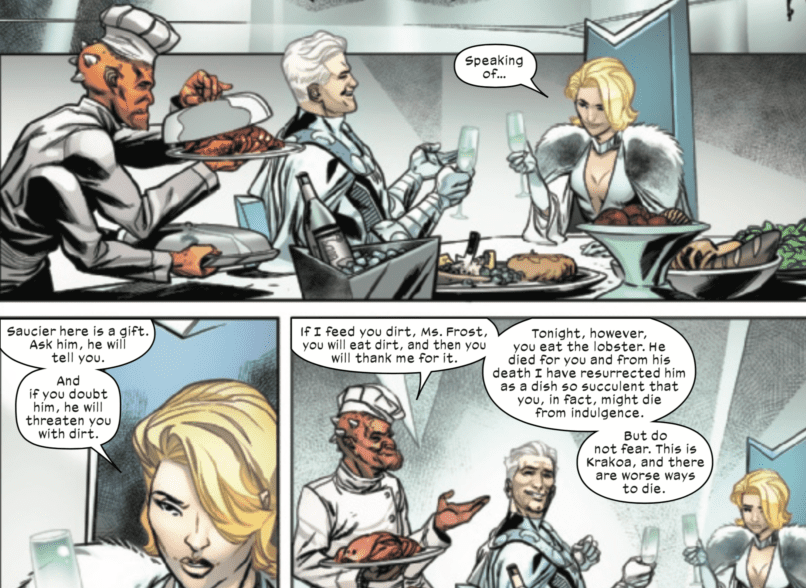 Maybe we’re just never used to seeing Magneto “with his hair down,” but living in a mutant utopian dream might allow someone like Magneto to relax and enjoy being with the only people he wants to spend time with–other mutants.

One does get a sense that the Magneto we’ve often seen as a villain over the years is a much different person around those he considers his friends.

One small, nit-picky mistake can be found on this page. See if you can find it. 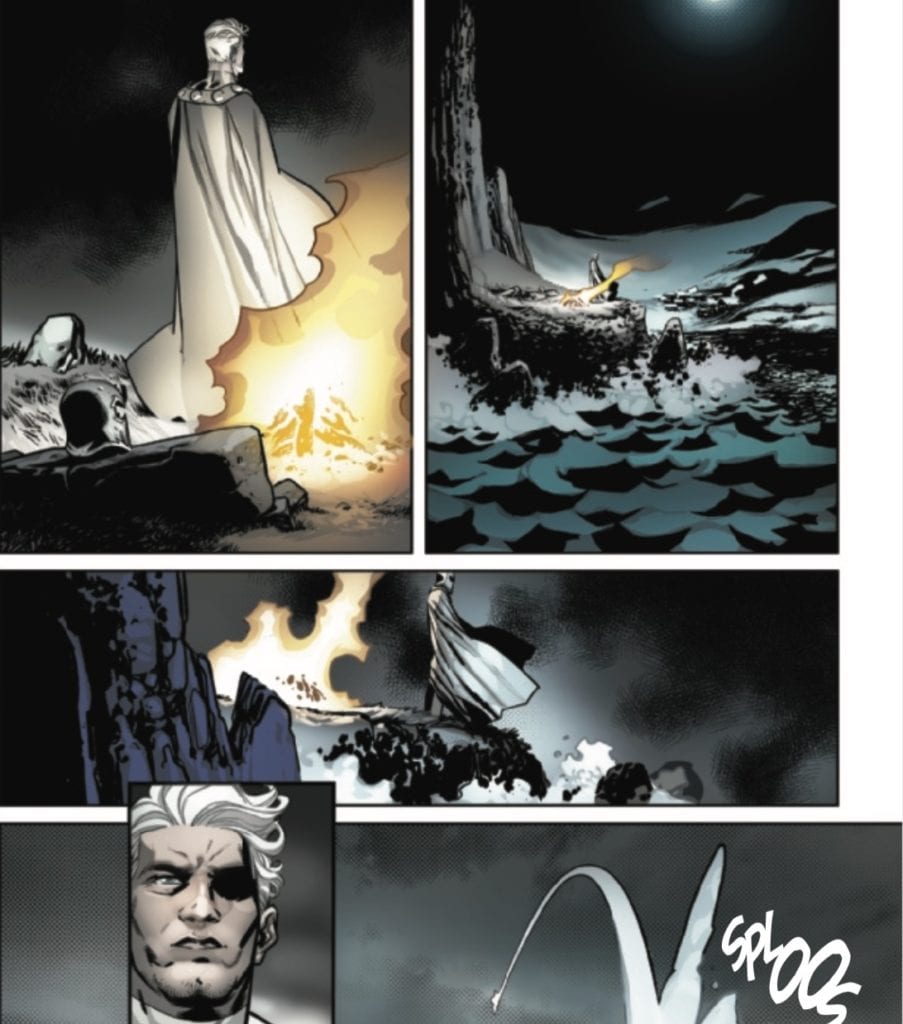 Did you find it? (Tell us if you did in the comments below).

The coloring in this issue is solid, particularly the work that Curiel does with the icy depths of the ocean. 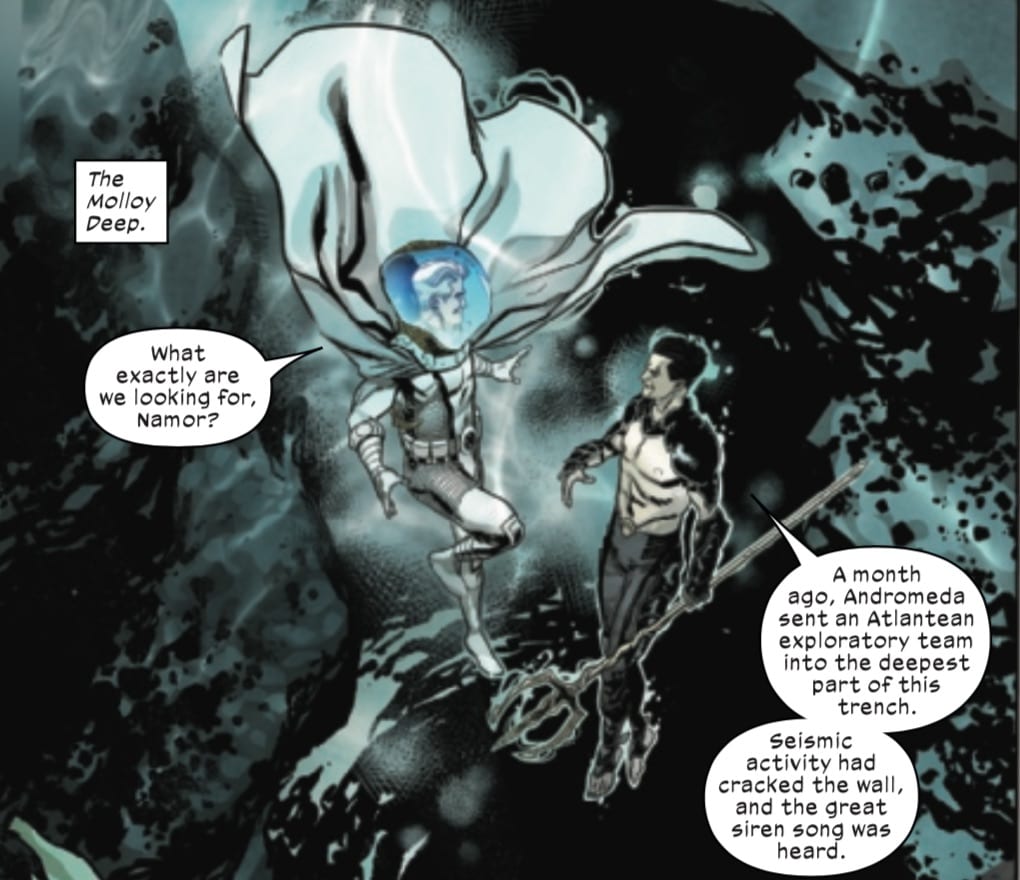 Curiel does an excellent job of portraying a watery environment, particularly one that is down in the depths where light can’t reach. Surrounding the characters with darkness with a slight surrounding barrier of water communicates the dark, oceanic environment well. The light beam shining down in the middle of the page, outlining the surrounding rocky depths, is also a nice touch, and a careful use of color and shading to portray this environment.

Cowles’s lettering is serviceable in this issue. It captures the small character interactions between Magneto and the island’s keeper, and it keeps the plot moving forward. There was also this quite enjoyable note of verbal surprise from Namor. 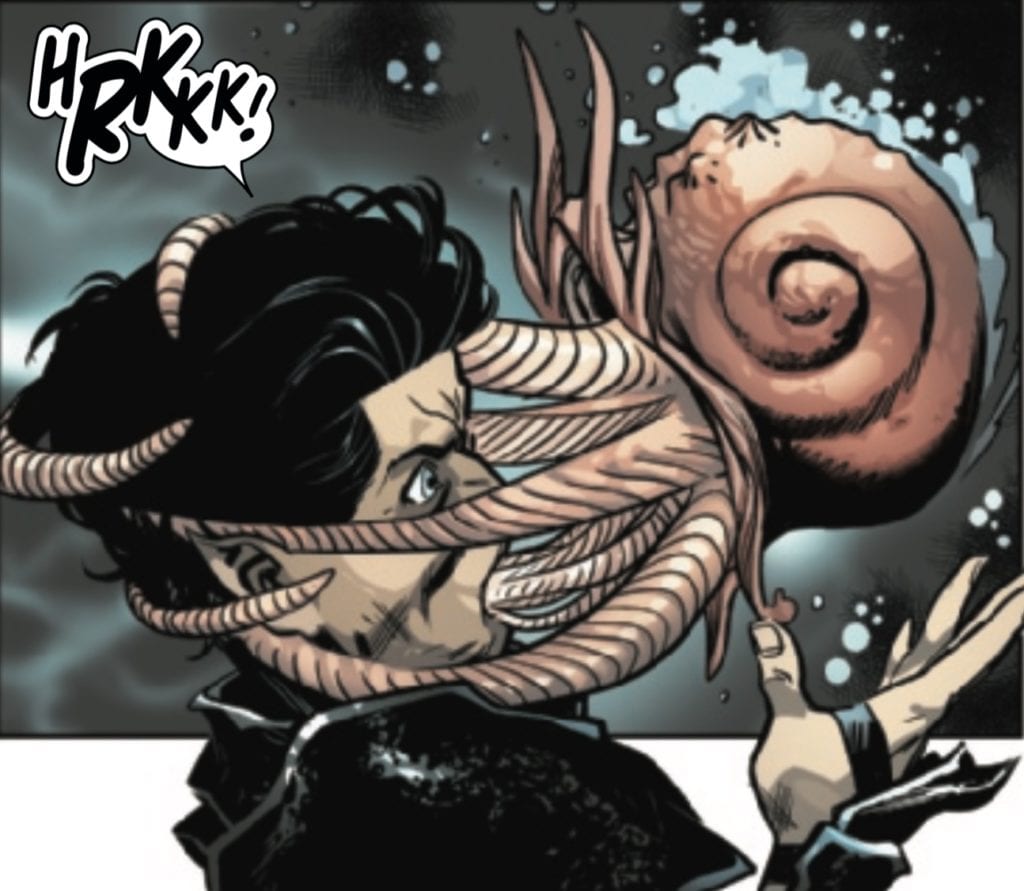 Couldn’t have happened to a nicer guy.

I love all things Hickman, but I’m a little confused about the purpose of these giant-size issues. Naming them after different characters makes the reader think that we might get deep inside the headspace of the particular X-character in question and how they are processing the new status quo in the world post-Krakoa. In Nightcrawler’s issue, I expected to see him pursuing his goal of starting a new Krakoan religion, but he is far from the central character in that story

The Magneto issue comes closer to making sense that it’s named after him, although he is joined by Namor and Emma Frost for huge chunks of the story, I’m not sure if there has really been anything about either of these giant-size stories that warrant marketing them as though they focus on one character. These could have been issues of the regular X-Men title and numbered accordingly.

Do you want to see a story that dives into the depths of Magneto’s psyche and whatever agenda he has for Krakoa? Move along. Do you want to see a run-of-the-mill adventure with Magneto as mostly-the-lead-character that is probably seeding even more future plot details in Hickman’s X-epic? Then yeah. Check out this story.

What did you think of Giant-Size X-Men: Magneto? Tell us in the comments below (along with whether or not you found that one art mistake).

Magneto does a favor for a friend and goes for a swim with Namor, but these giant-size issues are less an exploration of the characters they're named after and more about seeding plots for the future.Review: GIANT-SIZED X-MEN - MAGNETO #1 - Hickman Plants More Plot Seeds