Review: Marvel’s GHOST RIDER #1 Begins One Hell of a Story

Though Hulu might not have been on board with the story, fans are thrilled to see Marvel returning to the tale of the Ghost Rider. To bring the Spirit of Vengeance roaring out of the events of Damnation and Absolute Carnage, Marvel has commissioned one HELL of a team in writer Ed Brisson, artist Aaron Kuder, colorist Jason Keith and letterer Joe Caramagna. But like a giant, flaming motorbike, Ghost Rider is sure to be a difficult machine to operate. With a complex history and high fan expectation, does the Ghost Rider team stick the landing, or do they go up in smoke (er, in a bad way)? 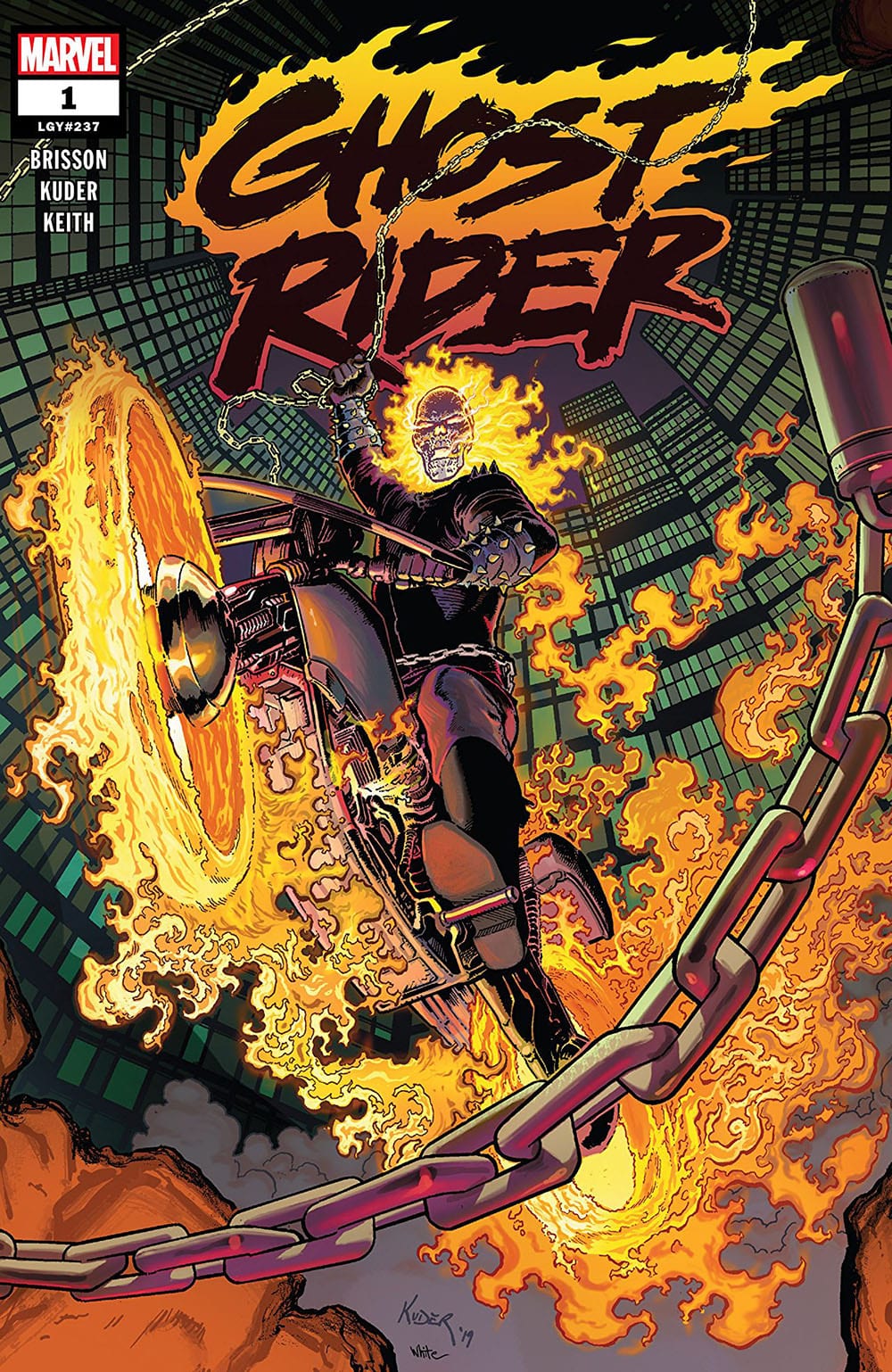 Abandon All Hope, Ye Who Are Jumping On Here

If, like many of the people picking up this book, you’re not aware of Ghost Rider’s most recent activity in the Marvel Universe; here’s a quick primer: Mephisto is being held in the Sanctum Sanctorum. Johnny Blaze is King of Hell. Danny Ketch is swapping a mournful attitude for as much whiskey as he can drink, and the city of New York has gone a decent amount of time without demonic invasion.

Of course, that changes at the beginning of this issue, when Johnny stops a troop of demonic jailbreakers trying to flee into our world. To figure out their purpose, Johnny travels to Earth and teams with the liquored-up Danny, stopping a monstrous escapee before catching up with his brother/fellow Ghost Rider. But while Johnny’s on Earth, another force is building in the world below. Pretty soon, Mephisto won’t be the only challenger for the throne of Hell.

Fans of Ghost Rider’s unique look as opposed to the rest of the Marvel universe will definitely be pleased by Ghost Rider #1. In fact, Aaron Kuder’s characters are the absolute strongest part of this book. Kuder is to comics what Hieronomous Bosch is to classical paintings: the denizens of his Hell help build out a world that is entirely nightmarish, but in kind of a fun, circus-ey way. Kuder also nails the look of the Ghost Riders, portraying an aged, weathered Johnny Blaze and a morose, brooding Danny Ketch in a way that’s both respectful of the characters’ origins and different enough to tell a new story.

Of course, Kuder’s work wouldn’t read nearly as well without the madness of Jason Keith’s colors filling it in. Keith makes Hell a feverish, red place, far from the gloomy and cold underworlds of Sandman. Plus, Kuder’s work on our own spiritual plane isn’t bad either. Native New Yorkers will take note of the distinctions in tone that Kuder applies between Manhattan and Brooklyn, affecting not just the setting of the story, but the mood of the scenes told within.  Maybe that’s because Kuder’s spent a lot of time in NYC, or maybe it’s just because drawing Times Square and drawing the Ninth Circle of Hell aren’t that different.

Devil’s in the Details

Marvel familiar Ed Brisson brings humor and humanity to the world of Ghost Rider, ensuring this comic doesn’t lag as the reader goes through it. He handles Danny Ketch especially well; even if you’re not familiar with the character, you’ll end up liking him by the end of this issue. Johnny Blaze, too, is expertly handled in the story. He’s got a tough, “I’m getting to old for this shit” kind of vibe that’s refreshing in a book that could have easily starred brooding, over-monologuing anti-heroes.

However, the plotting of this first issue is a little thin. We can definitely tell there’s something huge coming to the supernatural corner of the MCU (fans will love the chart of underworlds found in the back of this book), but there’s very little actual information as to what that threat might be. Of course, this book is the beginning of a mystery, so the pilot issue shouldn’t contain too many reveals. Still, the structure of this issue might leave a little too much out, making the reader wonder what’s going on by the end. Basically, we shouldn’t be sure of much heading into Chapter 2 of a mystery, but we definitely need to know what the mystery is.

All that said, Brisson definitely gives hints of a larger mythos contained within the pages of Ghost Rider #1. Similar to what Marvel did with the Immortal Hulk and Venom, Brisson is working to retool a fan-favorite character into a horror-leaning antihero. For many fans of this trend and of the character itself, this will be a really exciting development. If that sounds like you, then absolutely pick up this book. There are big things ahead for Ghost Rider, and even if they aren’t 100% clear in this issue, you won’t want to miss where this story begins.

Ghost Rider #1 is not the strongest introduction to a series that Marvel has recently put out, but one can’t read it without thinking that something huge is coming out of it. With Johnny facing threats both internal and external and Danny questioning the purpose of his powers, there’s a lot for a good villain to use against the heroes in pursuit of the Throne of Hell. And when that Hell is drawn by Aaron Kuder and colored by Jason Keith, it’s absolutely worth pursuing. Pick up Ghost Rider #1 in your local comic book shop on October 2nd.

For more reviews like this one, follow us on Twitter. And for all the best discussion, reviews, and news on comics, stay tuned to Monkeys Fighting Robots.

Though Hulu might not have been on board with the story, fans are thrilled to see Marvel returning to the tale of the Ghost Rider. To bring the Spirit of Vengeance roaring out of the events of Damnation and Absolute Carnage, Marvel has commissioned...Review: Marvel's GHOST RIDER #1 Begins One Hell of a Story