G.I. JOE #2 Puts The Fight and Joe in Family

This Wednesday, IDW’S G.I. JOE #2 shifts the focus from recruitment to basic training as Tiger learns what it is to be a Joe, and a fighter.

Haven’t been recruited to the new G.I Joe yet? Check out the first review, or grab it from your local Comic Shop! 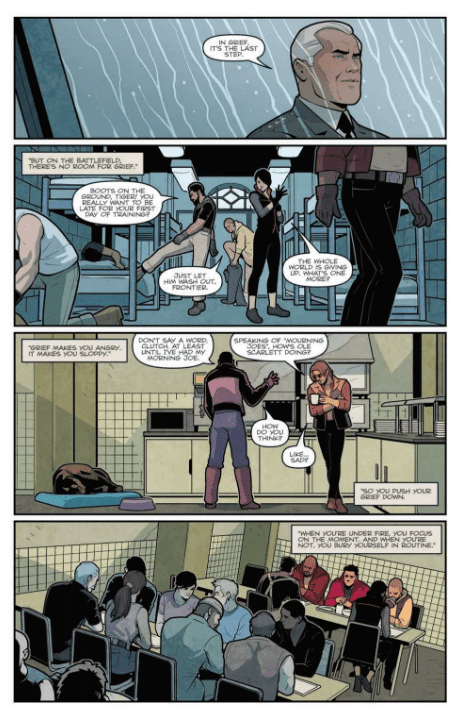 A Family That Fights Together

Unlike the first issue’s adrenaline filled opening, G.I. Joe #2 begins on a somber down beat. But starting on a down beat means you can only go up, which is were the characters and plot go as they work their way through grief while becoming a family.

Writer, Paul Allor keeps the plot primarily on the Joes, via an overall narrative coming from General Hawk. Hawk’s speech exudes the theme of grief and its effects. This theme is then carried through Scarlett, while Allor shows the slow transition of Tiger becoming part of the family through training. By mixing these elements, Allor showcases how average and realistic the team is. This all accumulates towards then ends where the Joes act as a family, coming together when one of them is in need.

G.I. Joe #2 ends on a huge cliffhanger that’d been building in General Hawk’s narrative throughout the issue. Classic fans may not be that surprised by what transpires. But newcomers will, forcing them to do a quick Google search. 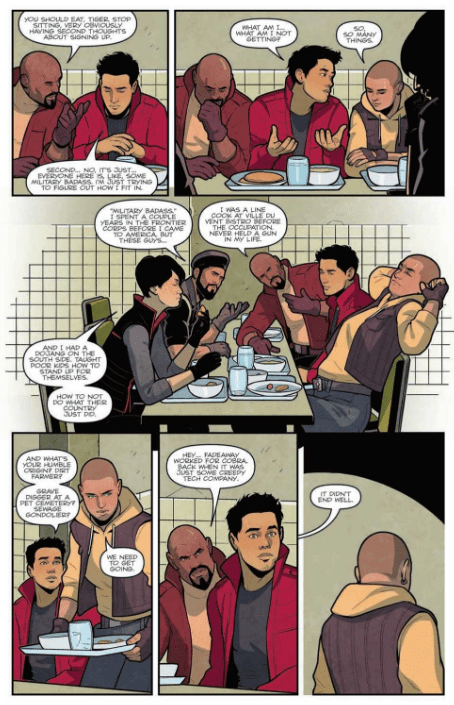 The Art Of Fighting

Artist Chris Evenhuis continues to blend realism and animation with each line drawn. The somber moments look fantastic as each emotion felt is seen on the characters face. But one of the highlights seen throughout is how Evenhuis portrays the action sequences. This is due to the abundance of them, and simplicity.

Much like the previous issue, Evenhuis showcases a singular fighting motion in a single panel, helping emphasis what’s happening. Furthering this spotlight on a single action is Brittany Peer’s colors. Or lack of color in some cases. Peer’s keeps the tone inviting with bright colors, making the serious matter not so imposing.

During the fighting panels, Peer’s portrays the background as a singular color, helping exaggerate what transpires. This usage of a one-color background bodes well with Evenhuis’ singular movement panels. During one case, Peer’s voids half the panel of color, making the impact of Scarlett’s kick feel more impactful.

Some moments of gun and explosives were void of sound effects in the first issue, which seemed weird. G.I. Joe #2 follows this trend with letterer Neil Uyetake voiding the fight scenes of sound. But in this case, it helps amplify the simplicity the others strive for. 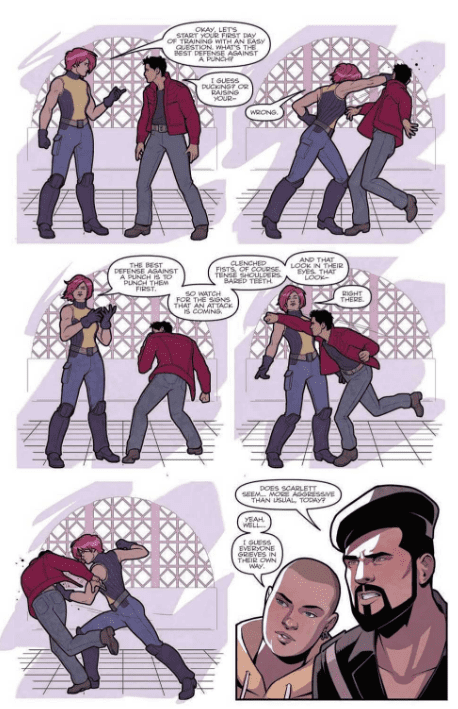 G.I. Joe #2 expands upon its ‘everyone’s a Joe’ concept by delving a little deeper into the characters. Mix in easy to follow, fun fight scenes and you’ll soon find yourself a Joe!

Memorable Quote: “The best defense against a punch is to punch them first.” – Scarlett

I mean, she isn’t wrong?

With basic training under way how do you feel on the new G.I. Joe series? Let us know below!

G.I. JOE #2 Puts The Fight and Joe in FamilyG.I. JOE #2 picks up the pace by building its characters and hinting towards an uneasy alliance.