FUTURE STATE: WONDER WOMAN #1, out now from DC Comics, is the first issue of a two-issue miniseries by writer/artist Jöelle Jones, colorist Jordie Bellaire, and letterer Clayton Cowles. With an ingenious, fun plot and gorgeous, captivating artwork, this issue serves in these difficult times as the ultimate escapist adventure.

Within the first 8 pages, Jones solves an issue readers have pointed out for a long time regarding DC’s heroes- they’re too perfect and powerful to be able to relate to them. Jones manages to solve that by introducing Yara Flor as a heroic character, a woman on a mission; Yara serves as the mediator between the gods and humanity. She is powerful, cheeky, and unapologetic. But, Jones doesn’t let us forget throughout the entire issue- Yara is also flawed and makes mistakes. Those errors move the plot forward brilliantly and make it too easy for the reader to fall in love with the futuristic Wonder Woman instantly. 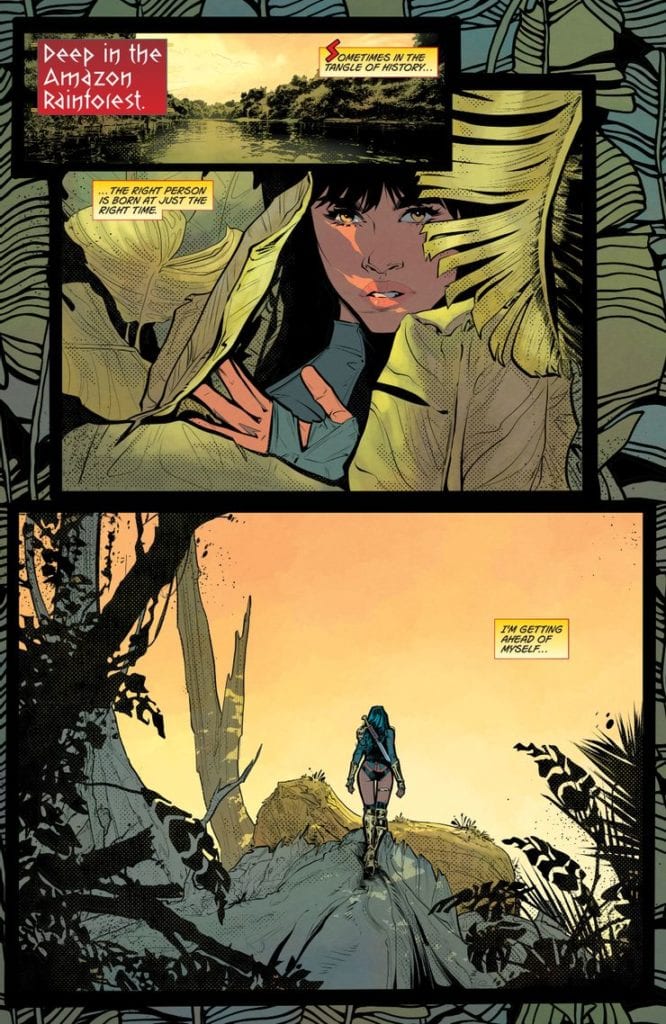 To help the reader get further engaged, Jones hones in on each background character’s looks. The feeling I’ve personally got when catching glimpses of those background characters that end up having nothing to do with the plot reminds me of the feeling people got when experiencing Star Wars: A New Hope for the first time. I couldn’t help but feel this fiery curiosity inside to know more about these characters. I immediately started wondering about their backstory or about what adventures are they going to embark on- A feeling I haven’t felt in a long while.

Also, the facial expressions look skillfully expressive; the backgrounds look well-detailed, beautiful, and engulfing. Everything about the artwork enchants the reader. Personally, I’m looking forward to getting further lost in the world Jones has created.

Bellaire’s coloring in this issue basically invites the reader to enjoy this world’s uniqueness even more. Bellaire colors each page with vibrant, bold colors that make the pages pop wonderfully, elevating Jones’ magnificent artwork and complimenting it.  Most notably, the way Bellaire colors the skin tones always remains realistic to a certain extent but still makes each character look full of life. Great work from Bellaire. 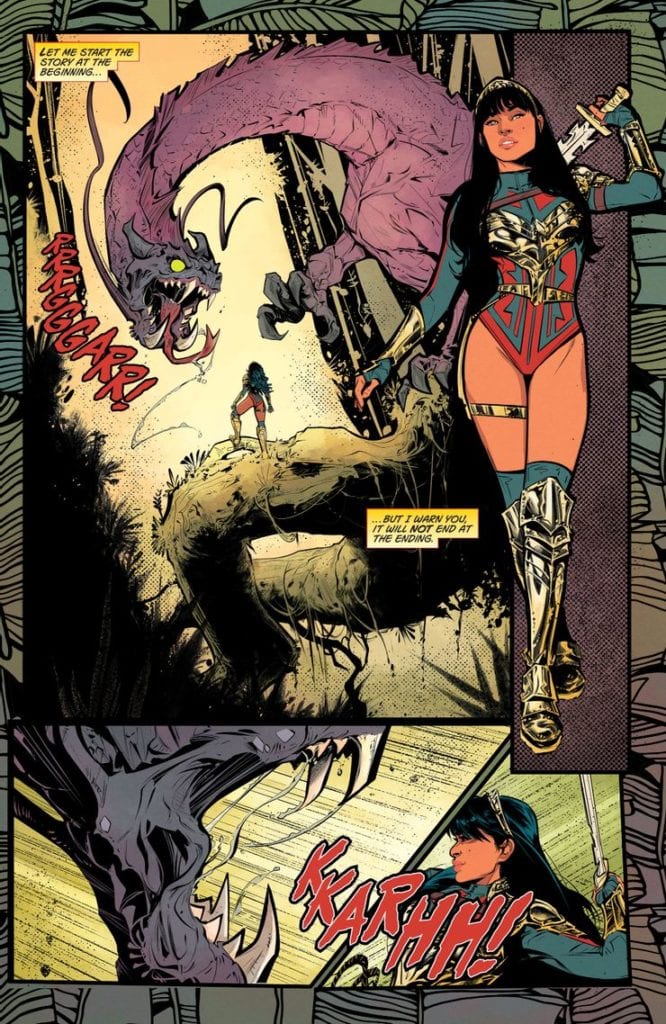 Cowles’ lettering definitely delivers and manages to elevate the fun even more with colorful sound effects and balloons. Almost every character in Future State: Wonder Woman #1 has its own unique, stylized balloon. Cowles also places the balloons in a way that never distracts the eye. I especially liked Cowles’ choice to never design the captions as a perfect square, making it a lot more appealing to the eye. It’s another “lettering rule” Cowles breaks to elevate the comic’s freshness.

Admittedly, this first issue makes me wish it didn’t have to end so soon. Future State: Wonder Woman #1 is a breath of fresh air; A perfect example of why Jöelle Jones is a rising star in the comics industry. Strongly recommended to anyone who wants to escape today’s harsh realities and embark on a wild adventure.