Review: FAR SECTOR #9 – The Eye of the Storm

From Writer N.K. Jemisin and artist Jamal Campbell comes another chapter of DC’s surprise hit with Far Sector #9. While this issue is comparatively uneventful compared to the drama and action of most of the other chapters, this is still 22 pages of insightful and effective narrative combined with more of Campbell’s absolutely astounding artwork. With letters from Deron Bennett, this is still a great read that sets up the next intense arc for this series.

“Jo’s investigation into the conspiracy at the heart of the City Enduring takes her to Platform Solid Ground, an alien farmland where most of the City’s food comes from. But what the headstrong Green Lantern discovers there shakes even her to the core as Far Sector’s thrilling threads of murder and machinations build to a fever pitch.”

N.K. Jemisin has been known to pack massive amounts of story into every 22-page issue of Far Sector without anything ever feeling too slow or unnecessary.  In this ninth issue, it’s interesting to see that she has decided to write a chapter that feels almost like a recap of sorts. This issue isn’t as exciting or eventful as the others (despite it’s disturbing final page revelation) because it goes back over many of the concepts we already understand while revealing new ones through conversational dialogue. This isn’t even a bad thing really, as Jemisin’s direction with the plot and her dialogue abilities make the issue still delightfully entertaining. Her decision to make this issue a stepping stone from the last arc to the next has me (and should have you) excited and intrigued at what she has in store for her finale. The socio-political concepts she tends to focus on are still here, but still read as if they are a fresh wound. Seeing the issues and plight of lower-class citizens on the City Enduring, as well as coming to understand the upper-crest’s absurd political system, is uncomfortably timely. Jemisin packs in a ton of relevant story and packages it with a continually compelling character arc. 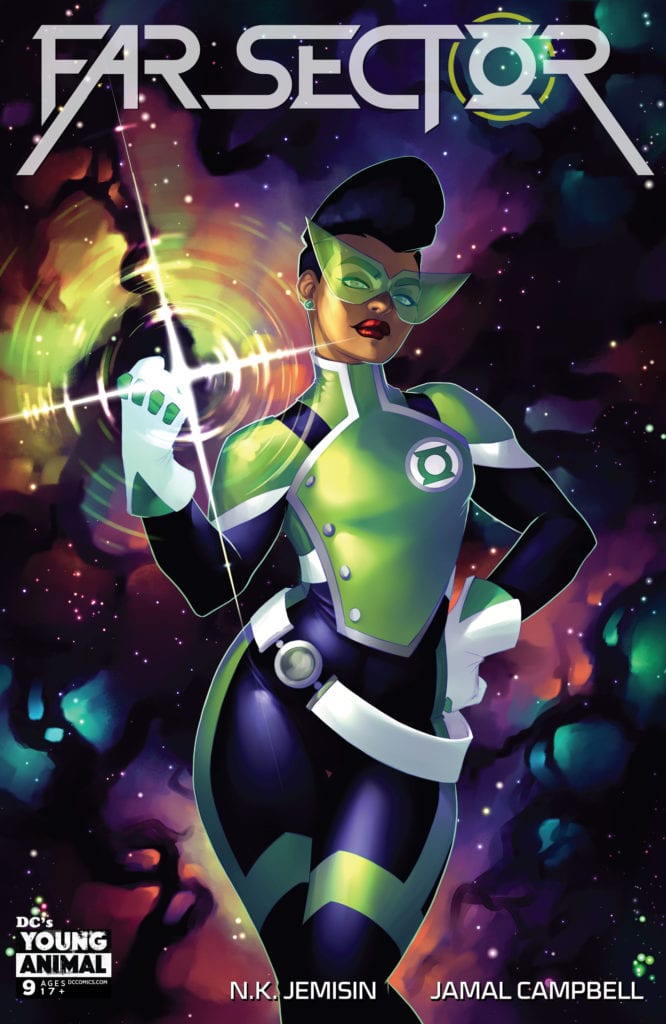 In all honesty, what more can be said about Jamall Campbell’s artwork? His work here on Far Sector #9 is as stunning as always, full of spectacularly animated characters and stunning sci-fi visuals. This issue’s focus on character drama and investigation draws away from Campbell’s visual action choreography and more towards his ability to focus on person-to-person interactions. This issue is largely comprised of shot/reverse shot or reaction shot panels that build the story through the character lens. Campbell’s precise digital art style is perfect for this sort of space opera/noir tale, as the characters and environments bleed with color and imagination on every page. The lettering from Deron Bennett is modern and classy, using as clean font in the speech bubbles while being inventive (but not over the top) on the special effects. This is once again a brilliantly put together piece of visual storytelling.

Far Sector #9 may be a bit of a dull issue compared to its predecessors, but it’s still a completely effective piece of character storytelling and pointed political commentary. N.K. Jemisin pens a script that focuses in on what she wants this story to ultimately be about while setting up the next major arc. Jamal Campbell once again draws an immaculate sci-fi world with a variety of stunning alien life and vivid colors. This has been one of DC’s best comics of the past year, and it’s absolutely worth the pickup when it hits the stands at your local comic shop on 12/1!

A comparatively uneventful issue of this space-crime noir that still offers insightful commentary and continually incredible visuals.Review: FAR SECTOR #9 - The Eye of the Storm