Accomplished Sci-Fi and fantasy writer N.K. Jemisin teams up with artist Jamal Campbell to try her hand at the comics medium with Far Sector. While this first issue has a couple small flaws typical to #1’s, the creative team still pull of an impeccably drawn and enticingly written space murder-mystery that’s also a welcome addition to Green Lantern lore.

Newly appointed Green Lantern Sojourner “Jo” Mullein has been placed in charge of keeping the peace of The City Enduring, a massive metropolitan planet home to three separate races that were once at war. To reach peace, these three societies stripped themselves of all emotion, and there has been no violence on the planet for 500 years – until now. A sudden and brutal murder on Enduring will put Mullein’s skills as a detective and a Lantern Corps member to the test, especially as it becomes more clear that no one on this planet can be trusted. 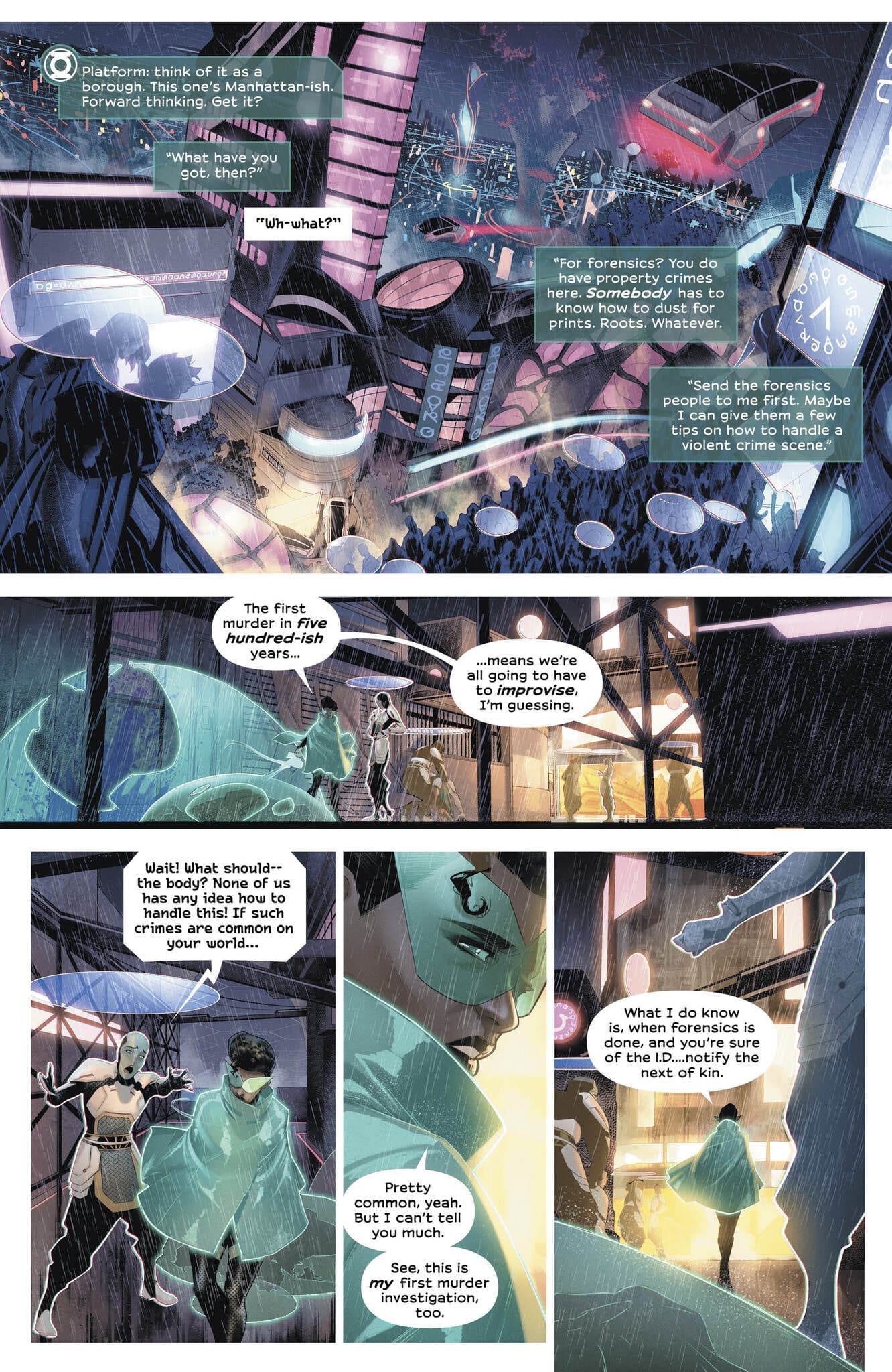 As expected, Jemisin has a confident and effective style on display while building the world, characters and plot of Far Sector. She has created a clever scenario with this story where the characters clearly know much more than the reader, and it’s a brilliant way to build intrigue. This concept seems obvious, but it’s easy to see how being lost in exposition can kill the interest in a story. However, Jemisin handles the information surrounding Mullein and this otherworldly society with a deft hand; she gives just enough info to keep the reader engaged, but holds back just enough to keep the story engrossing. Mullein herself is a cool treat as a character. She’s given a confident noir-ish personality with composed professionalism, but also a level of uncertainty that keeps her just barely off balance. She knows what she’s doing, but she is still a relative novice. The overall premise and plot is somewhat familiar feeling – the opening pages parallel Grant Morrison’s Final Crisis if you’re familiar – but there’s just enough originality to keep it fresh. The dialogue is a mix of formal character interactions (lots of alien bureaucrats) and Mullein’s cool-headed internal narration. There’s quite a bit being thrown around here, but it manages to stay interesting to take in.

As well written the prose here is, this issue does use a considerable amount of exposition blurbs to inform the reader of the plot. This issue is scene after scene of Jemisin using Mullein to explain the history of City Enduring, the relationships of the three races, as well as her own thoughts on the murder case at hand. While the writing itself makes this all mostly worthwhile, it’s pretty likely passages will take more than one pass to fully comprehend. Also, the issue’s final page doesn’t feel like a clean transition to the next issue. It’s a tense final page moment, but just a bit too sudden an end for a month long wait to see what happens next. 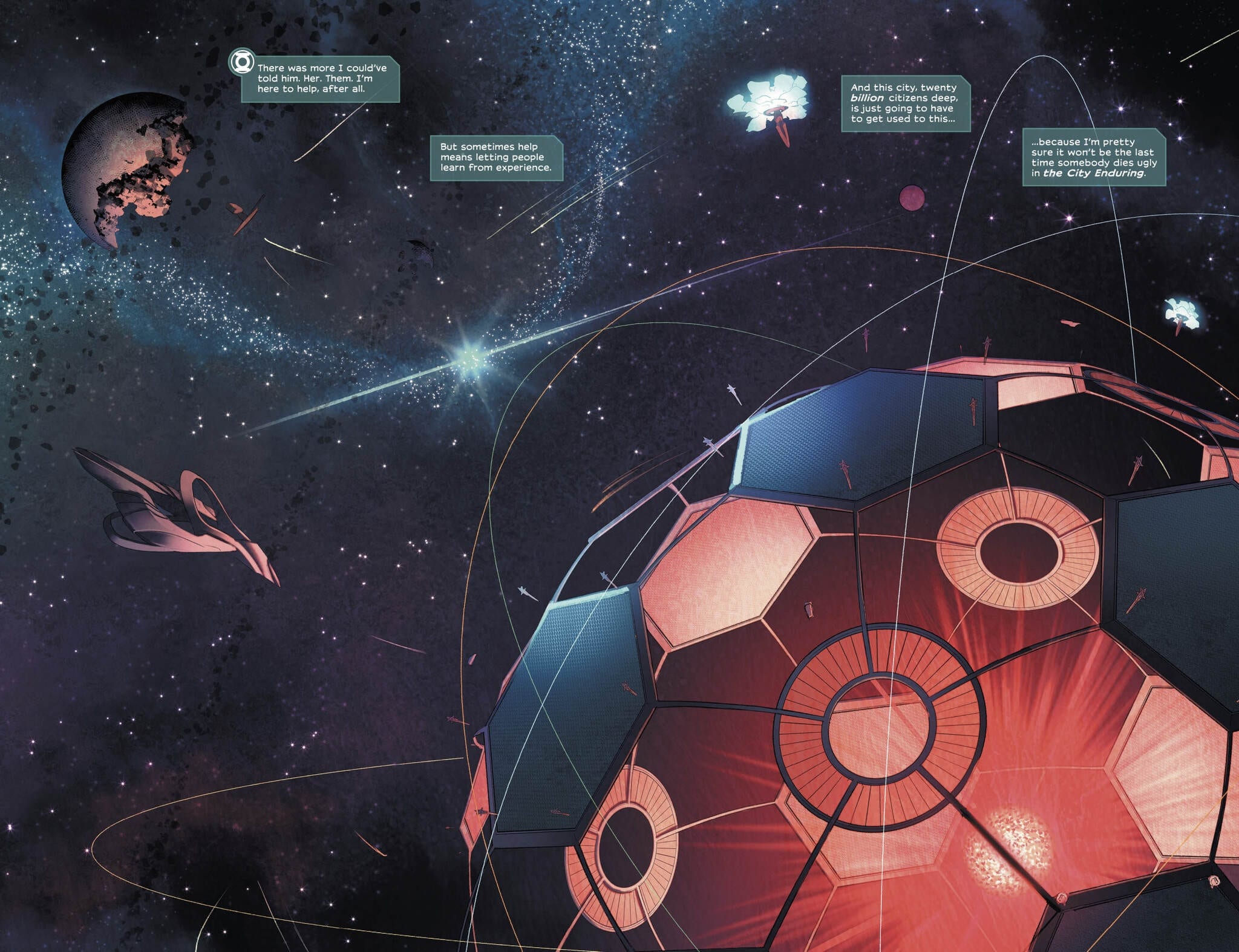 A great sci-fi comic needs stellar art in order to enrapture its audience. Fortunately for Far Sector, Jamal Campbell is here to draw this new creation into life. There’s a pristine beauty that Campbell’s digitized style brings to this kind of Utopian alien world. Soft colors wrap around futuristic structures, and hues bathe entire sequences with a realistic effect. Character facial expressions are given proper attention without ever being distracting or over the top. If there was one critique to be had, it would be the kind of “sameness” a lot of the characters have regarding their design and facial structure. It can be a bit hard to tell characters apart from one another. This may be attributed to the purposeful Utopia the plot describes, but it is something to make note of.

Deron Bennett’s lettering here plays it pretty safe, but is still sharp and focused as far as lettering goes. There’s an interesting choice made with a kind of softer font, but it works with the tone of the world created in the comic itself. Tense moments and arguments are highlighted and bolded to the exact amount that seems necessary for the scene playing out. Overall, completely professional work here. 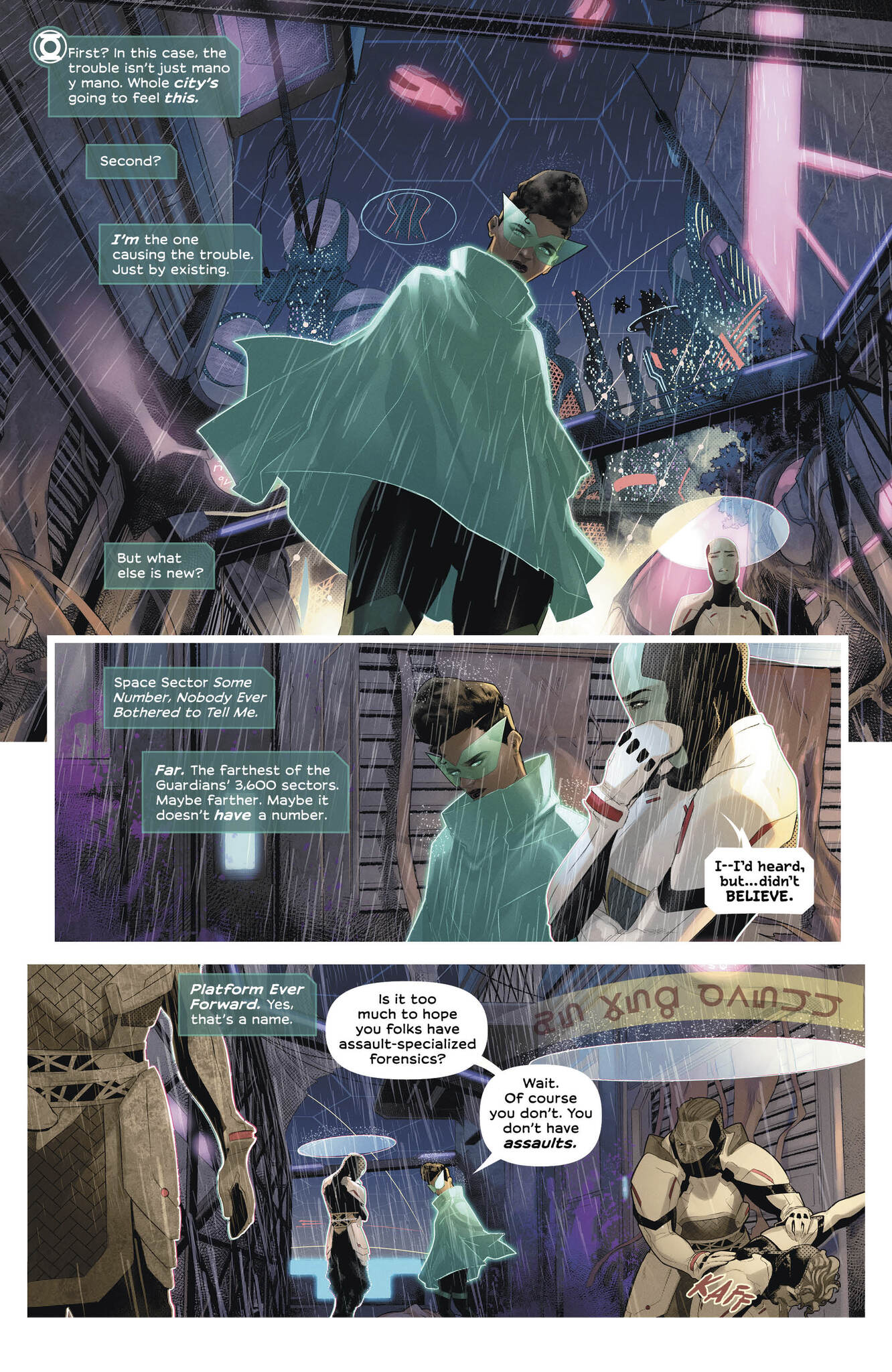 “Far Sector #1” is an enticing opening to a murder mystery that’s sure to bring plot twists, unexpected dangers and revelations about this new member of the Green Lantern Corps. N.K. Jemisin’s writing is confident and maintains a sense of mystery, even if it does get a little bloated with exposition at times. Jamal Campbell’s art provides a stunning setting with believable character expressions that completely sells the mood of the issue. Far Sector is looks like it could shape up to be a great new addition to Gerard Way’s Young Animal imprint, as well as to DC’s Green Lantern mythos. Pick it up at your local comic shop on 11/13.

Review: A New Green Lantern Takes Flight in FAR SECTOR #1Despite a couple minor structural issues, "Far Sector #1" is a beautiful and intriguing introduction to a new character and a mysterious crime plot.