Writer N.K. Jemisin and artist Jamal Campbell return to the City Enduring with “Far Sector” #4. This uses sharp, attitude-filled dialogue and intelligent political parallels to offer commentary on the intense events of the prior issue, while building the behind-the-curtain tension for both the City Enduring and Sojourner herself.

“With the so-called Peace Division firing upon the protesters it’s meant to protect, new Green Lantern Jo Mullein devises a novel solution to bring the chaos to a close-one that causes the rookie Lantern to run afoul of the City Enduring’s leadership council. Meanwhile, we learn more about Jo’s recruitment into the Green Lantern Corps, and the nature of her mysterious and unique power ring.” 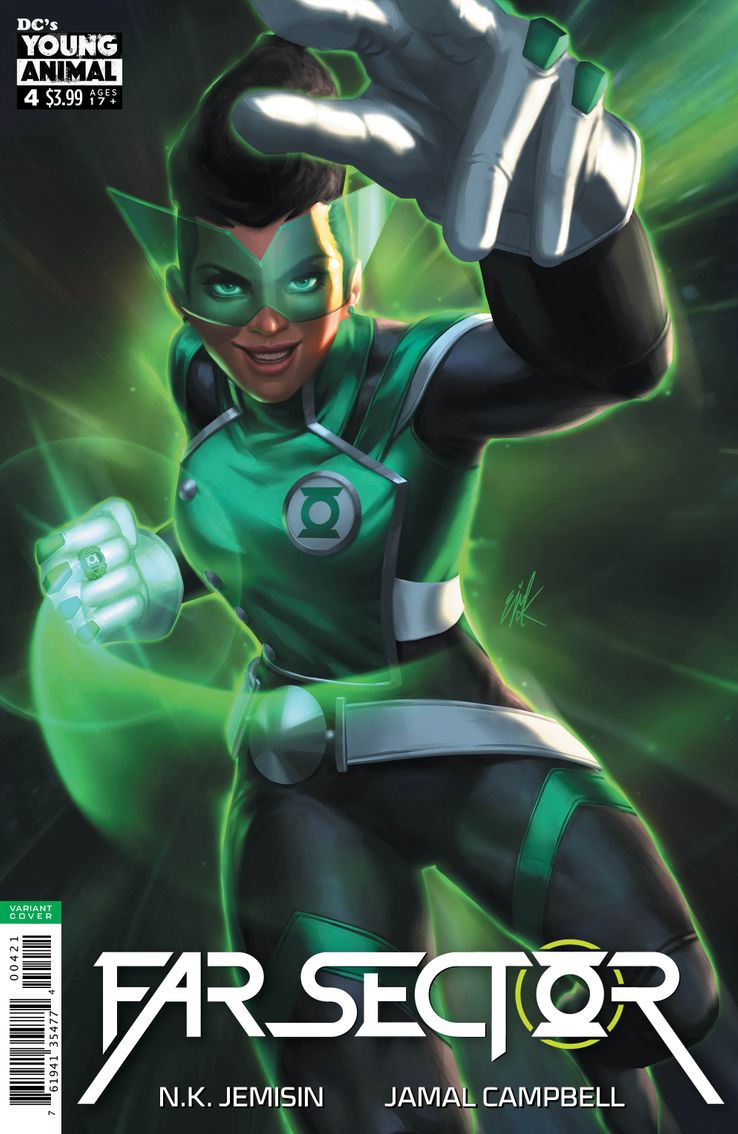 N.K. Jemisin‘s scripts in “Far Sector” are full of naturalistic but personality-filled and distinctive dialogue and narration. Jo Mullein’s dialogue and inner-narrative speech are completely honed to a recognizable and distinctive manner of delivery. The other characters are given their own distinct diction in their dialogue as well, making reading the often lengthy sequences of conversation and debate (mostly the latter) in issue #4 a pleasant trip at least. The plot here takes its time to dissect the decisions made by the council and its security force in the last issue by using obvious parallels to our own reality. The struggle Jo faces as a galactic peacekeeper against a planetary police force is a compelling one that’s layered with poignant and relevant moral arguments. It’s a consistently engaging plot to dive into from issue to issue, whether it focuses on action or interpersonal relationships or planetary politics. 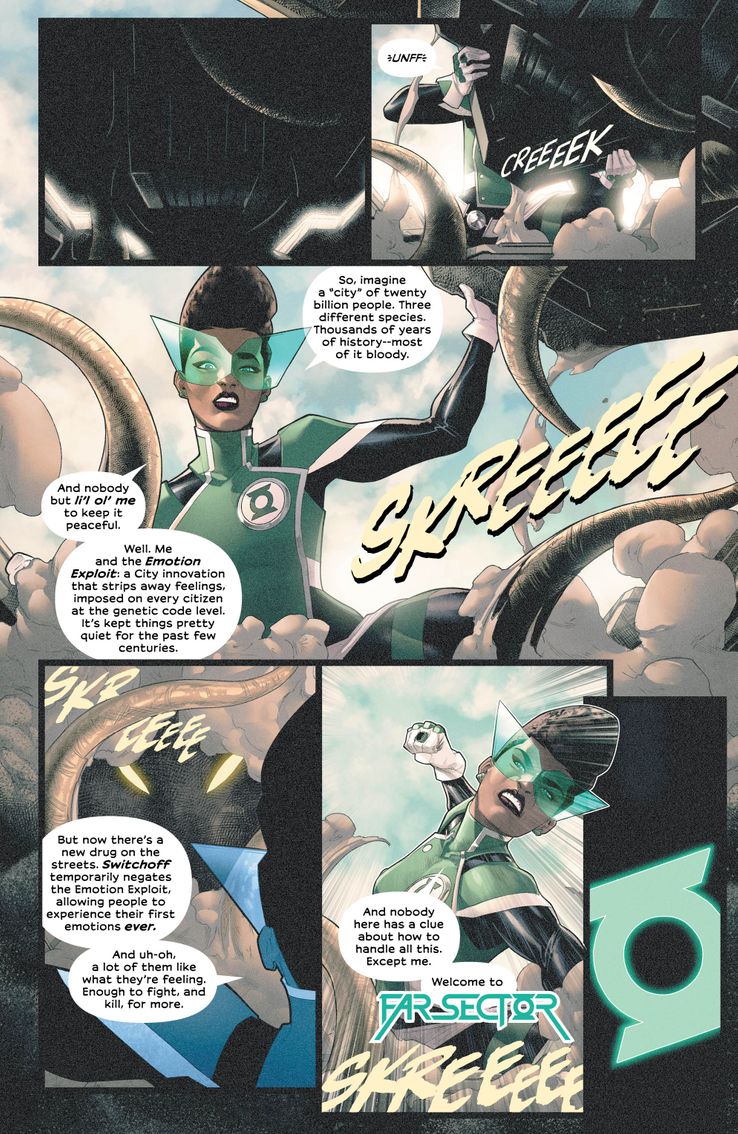 There isn’t much to say about Jamal Campbell‘s absolutely astonishing artwork in “Far Sector” #4 that hasn’t already been said. The massive variety of character designs that inhabit the crisp futurism of the City Enduring is a feast for the eyes from month to month. Campbell’s colors once again arrive in a slew of sci-fi neons and digital hues that are a wonder to behold, making this one of the most gorgeous comics on stands right now. The lettering from Deron Bennett utilizes a soft but clean and bold font that changes in subtle ways depending on the character speaking and the manner they speak in. It’s a simple yet highly effective choice that guides the reading experience along flawlessly. 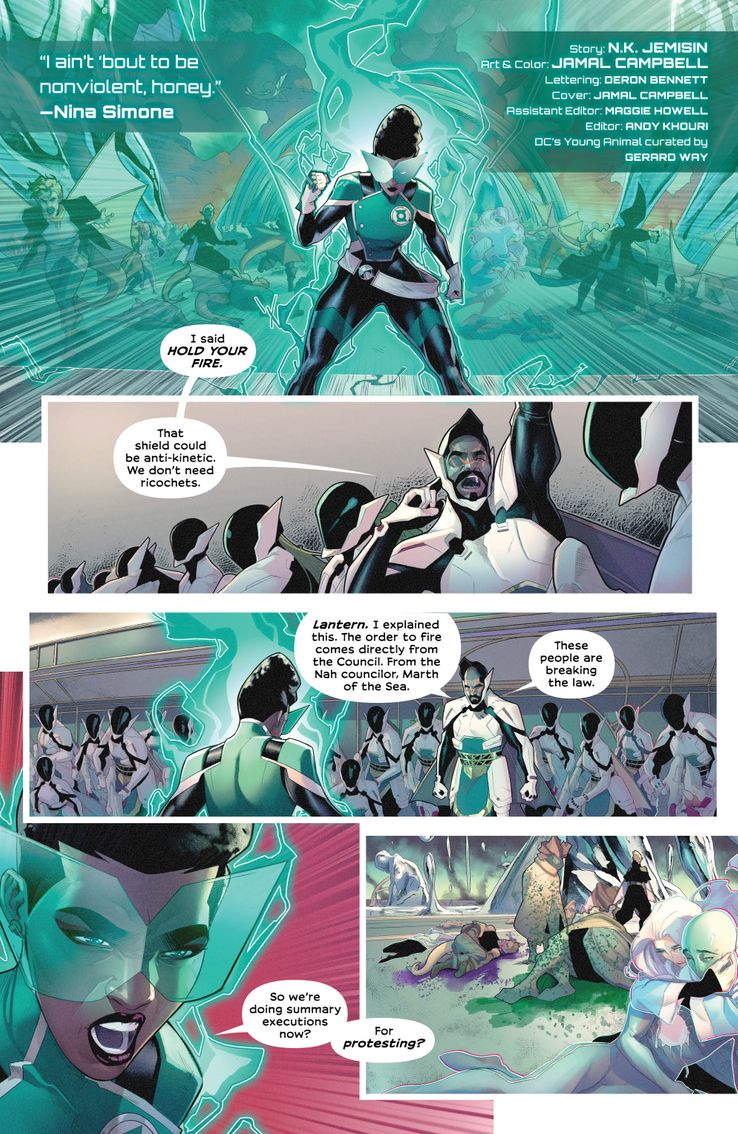 “Far Sector” #4 is yet another great issue in one of the best comics DC is putting on stands right now. N.K. Jemisin’s poignant and compelling scripts work hand in hand with Jamal Campbell’s gorgeous futuristic art to bring out one of the sharpest comics in recent memory. Be sure to grab a copy of this chapter on 2/26!

A chapter that takes its time to explore the ramifications of its action sequences with smart dialogue and incredible art.Review: FAR SECTOR #4 Talks Protest and Political Obstinance