Writer N.K. Jemisin and artist Jamal Campbell return with the second to last chapter of their brilliant series Far Sector. This issue lays out the full focus and interests on all sides of the massive coup on the city enduring, crafting a sharp societal critique without getting lost in any kind of political preaching. With a busy but sharp and intelligent script and once again outstanding artwork, this issue is a stellar setup for one of the most anticipated finales in comics this year.

“Riots are breaking out across the City Enduring as its citizens realize that there are political shenanigans disrupting their way of life and subverting the will of the people. To quell this unrest, @BlazeofGlory is threatening to unleash a terrible weapon upon her own people. Jo has to race against the ticking clock of a Green Lantern ring that is rapidly losing power to bypass the city’s entire defense forces and stop this attack from above.” 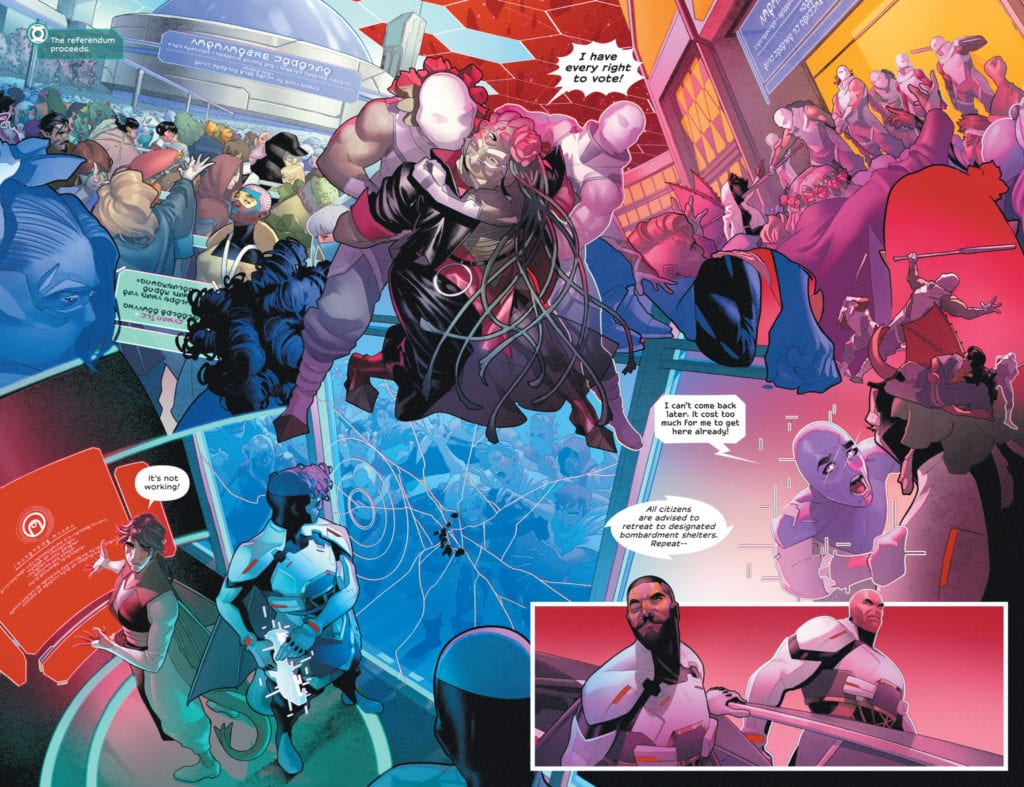 N.K. Jemisin’s scripts for Far Sector are always packed with info and interlaced with great character narrative, but this issue focuses a bit more on the former. Far Sector #11 is chiefly concerned with making sure the reader knows who lies where and why, and where exactly the different factions of the City Enduring’s allegiances lie during this massive coup. There are still some solid bits of character writing, and the dialogue is very solid, but issues like this make me thankful for collected editions. Don’t get me wrong, every issue of this series has been a delight to get to read, but with all of the info and complex socio-political context to keep track of among the different races in the story, it gets to be a LOT to try and keep track of; especially now that the series has been only been releasing an issue every other month. This all being said, this is still a very tight issue that addresses its own plot and its exterior influences with intelligence and nuance. It presents an example of when a rebellion can rise up for the right reasons, but in its passion utilizes the wrong methods to achieve change. Jemisin’s treatment of Jo Mullein as a protagonist has made her one of my favorite characters to read, and this increases with each issue. Every chapter we unravel just a bit more about what makes her tick, but there’s always something under the surface. This issue continues the trend, while also keeping her unique link to the Green Lantern Corps alive while never focusing entirely on it. It’s honestly easy to forget that Mullein is a GL, even when she is wearing the ring. It’s a completely secondary trait to her character, and that makes her and this comic all the more fascinating. 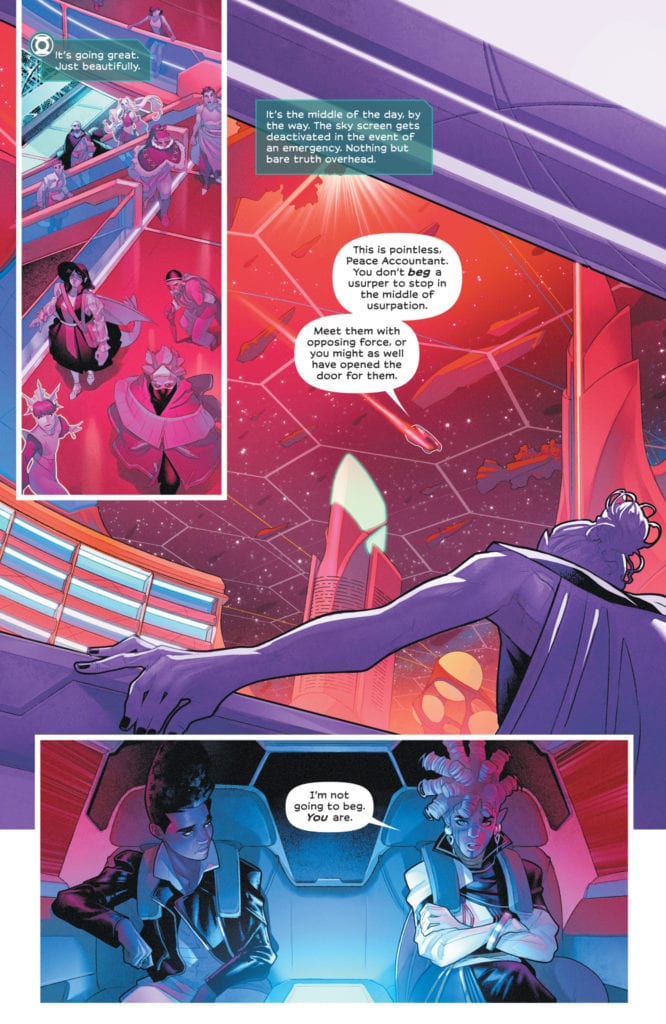 I have been raving about the incredible work of Jamal Campbell for every issue of Far Sector that has been releases so far. So now, for Far Sector #11, I will do so again. Campbell’s incredible, almost 3D digital artistry for his characters and environments makes for one of the most beautiful science fiction comics ever released with each subsequent release. This issue darts around with breakneck speed, but Campbell manages to keep up with the chaos on every front. Every page is a flurry of focused and frenzied conversation, as well as cuts around and above the plant to catch glimpses of the growing conflict. Each shot is rife with impact and importance, building the urgency and atmosphere of this penultimate chapter. The complex emotions every character is facing feel genuine and relatable to the reader, and the scenery of a planet at war is both concerning and stunning. The high-production concept art-style of this comic is perfect for the story being told, and I’d love to see Campbell draw more sci-fi in the future. Deron Bennett’s lettering is sharp and clean, and combined with Campbells makes for one of the most stunningly well-put together comics hitting shelves this week. 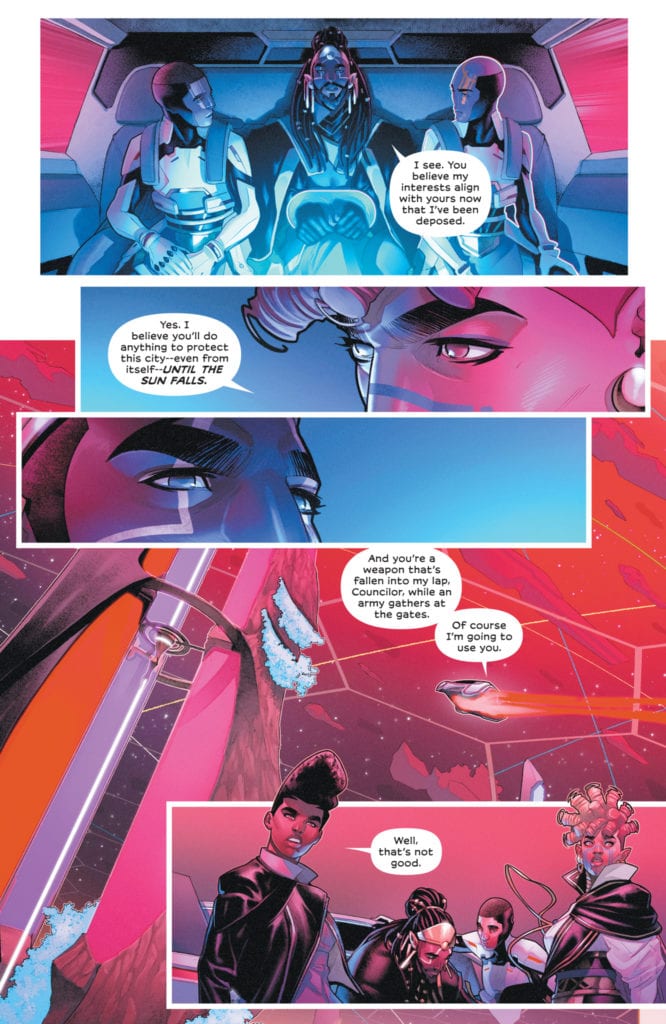 Far Sector #11 is a frantic and busy comic book, full of important expository dialogue and developments regarding the massive conflict that has sprung up for Jo Mullein to finally deal with once and for all. N.K. Jemisin’s script carries a ton of important dialogue and information leading into her finale, but still manages to avoid making it a chore to get through. Jamal Campbell’s art is forever a display of modern perfection among comics art, and a masterclass in what contemporary techniques are capable of. Be sure to grab this penultimate issue when it hits shelves on 4-6!

A hectic, complex, and gorgeous issue that lays out the players and allegiances in a massive uprising in the second to final issue of this stellar series.Review: FAR SECTOR #11 - Coups, Revolts, And Uno Cards