Review: Everybody Has An Extra Body In RAIN LIKE HAMMERS #4

Brandon Graham starts bringing together his endgame with “Rain Like Hammers” #4. This is undoubtedly the most audacious issue of this story yet, with the insane plot twists and threads all coming together like mind-bending clockwork. Graham’s surprising emotional core carries this issue along with his unexpectedly intelligent writing, clever humor, and unmistakable visual style, and makes the wait for this series’ finale an enormously difficult one.

“Supercriminal Brik Blok plans to steal a high-ranking aristocrat’s fingers and use them as keys to access the palace-world’s deepest sub-levels. Elsewhere, a detective working for the Immortals, and his sexy-sex robot assistant, are traveling across the solar system to investigate the strange happenings on Skycradle. SCI-FI FINGER BUTCHERY IN FULL COLOR!!” 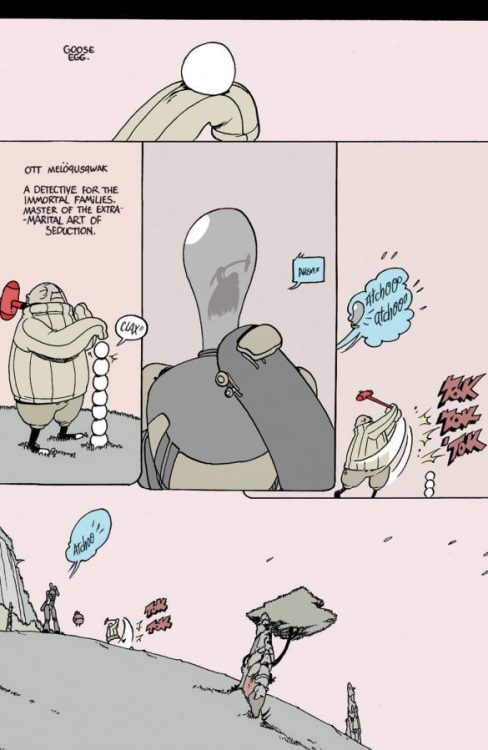 Brandon Graham’s obfuscated and careful plotting in this tale starts to wrap itself up in “Rain Like Hammers” #4. The full scope of what each character represents and who they really are is shown in its entirety for the first time, with a series of  flashbacks and twists that are totally insane yet brilliantly put together. The generally loose and ever-changing rules this comic’s world has allows for such crazy twists – which involve clones, birthing oneself, and implanting consciousness into another body – to be totally reasonable in this universe. These moments also have a surprising amount of emotional resonance, as the buildup through what these main characters have gone through makes these revelations very satisfying. Graham’s trademark humor is still here, but it’s a bit more reserved going into the series finale. The story also finally gets a single antagonist in the form of a sexually charged detective (also the source of most if this issue’s humor), but while his addition is welcome, the story’s focus on the larger picture makes it clear that there has always been a more major, societal enemy in play here. I desperately look forward to how Graham decides to end this wickedly fun romp in the stars. 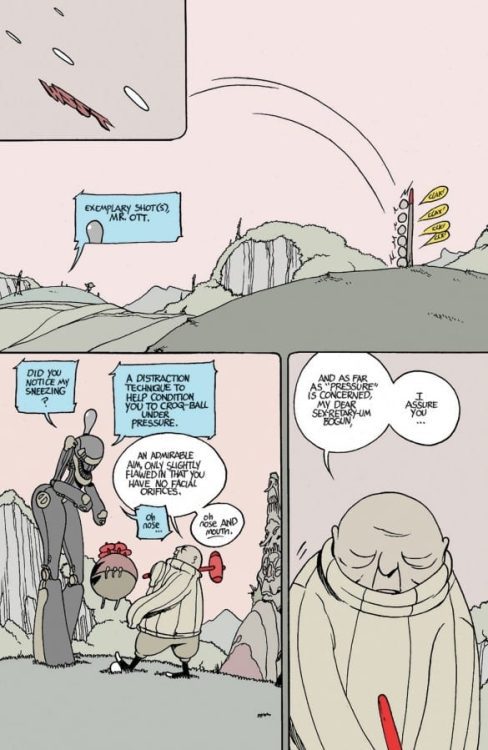 While it seems almost impossible, Brandon Graham’s visuals seem to reach new heights and complexities in “Rain Like Hammers” #4. The way Graham knits together this issue’s time and consciousness-jumping narrative, along with the seemingly enhanced animations and emotional details in the cast this time around makes this issue a true gem among uh… a bunch of other gems. Graham’s quirky designs for his characters and myriad alien beings will never get old, and he’s constantly coming up with new ones. His mixture of Seuss-ian and Moebius-esque architecture is an unmistakable sight to behold, with Skycradle’s cityscapes having a sort of abstract familiarity like it’s being seen in a strange dream. His panels here are an artfully inconsistent range of large and small sequential images that bleed together. His muted colors bounce all over the place, in a way that remains colorful and vivid but also deceptively bland (but in a meaningful way). This comic feels like a puzzle of visual storytelling, with the images in this plot unlocking the pieces of a massively meaningful plot with every turn of the page. This is incredible work, and possibly the best seen in this comic series so far. 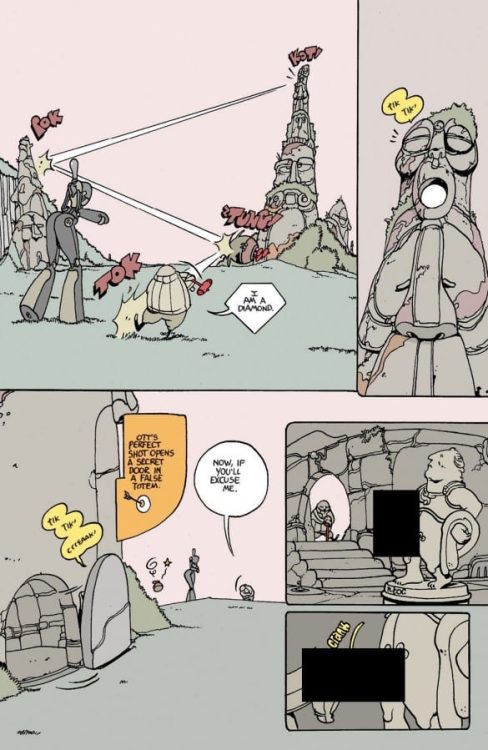 “Rain Like Hammers” #4 is a daring and impressively mind-bending chapter in a series full of daring mind-benders. Brandon Graham’s writing is every bit as clever as usual, but now with the addition of a kind of plot-driven intelligence and foresight that is surprising even by this comic’s lofty standards. His art is as abstract and joyously weird as ever, but with an emotional detail I haven’t noticed since the debut chapter. This is a staggeringly good semi-final issue, so be sure to grab it when it hits shelves on 4-21!

Brandon Graham outdoes himself with the most mind-bending issue of this high-concept satire yet, rife with clones, sex robots, and self-birthing. Review: Everybody Has An Extra Body In RAIN LIKE HAMMERS #4