Review: RAIN LIKE HAMMERS #1 – Living The Stagnant Life In A Walking City

Master of weird and subversive comics, creator Brandon Graham (King City, Prophet) returns again with dead-future sci-fi comic “Rain Like Hammers” #1. This strangely beautiful first chapter echoes with its scant storytelling style and huge, empty rooms and landscapes. A clever and effective look at depression and dealing with change, this is likely to be one of the most unique and noteworthy comics in 2021.

“Eugene is a new inhabitant of Elephant, a walking city on the desert world of Crown Majesty. Far from friends and family, he spends most of his time navigating melancholy daydreams, toying with alien technology, and researching the best places to find high-quality fast food. At best, his life is lonely and monotonous—but all of that changes when a mysterious force begins destroying Crown Majesty’s walking cities!” 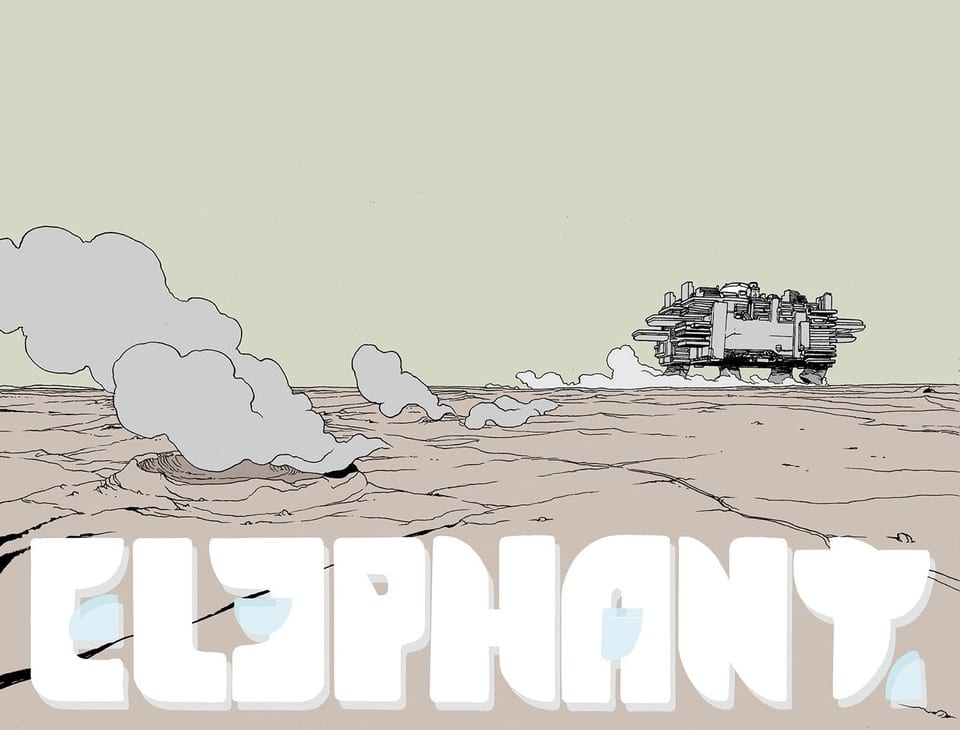 Brandon Graham’s messaging behind “Rain Like Hammers” #1 isn’t  grandiose in scale or subject like you may expect a science fiction comic to be. In fact, this is a book that only focuses on the monotonous day-in and day-out activities of the protagonist, Eugene. This entire comic is told from his perspective as he wakes up, gets cheap meals from a vending machine, goes to work, and comes home to his tiny apartment to watch reruns of his favorite tv shows before falling asleep. Then he wakes up and does the exact same thing. The fact that this all takes place in a walking city on a distant planet sometime in the presumably distant future means basically nothing until the last few pages of the comic. This could easily take place in Seattle or Little Rock for all we know. The only things going through Eugene’s mind are the people he misses in the city he came from and what he’s looking forward to later in the week (he saves his money to buy a better quality meal to go with his favorite show). Watching Eugene’s life felt uncomfortably relevant, which is exactly what good sci-fi does. What’s different here though is that the most obviously relevant part of this story is just how similar life for so many of us feels compared to Eugene’s. The man’s highlight of the week, after days of cyclically working a mind-numbing office job, is coming home to see a movie or show and getting to spend a bit extra on some slightly better quality food. The same could likely be said for many of us. The rest of the comic’s dystopian commentary doesn’t feel intentional, and more like a byproduct of the story Graham is telling. The vast emptiness of the environment reflects this dismal future, where the technological advances are incredible but they aren’t actually benefitting anyone. The scripted writing is a mixture of some scant dialogue among Eugene and his coworkers, but it mostly involves an omniscient third person take on Eugene’s own thoughts that elaborates on elements beyond the protagonist’s own understanding. There’s a quirky humor here that keeps the comic from being too bleak, as the story’s obvious commentary on depression would be too much if not for the small does of goofiness. This is a completely unique story in terms of writing, equal parts inventive, weird, and frighteningly relevant. 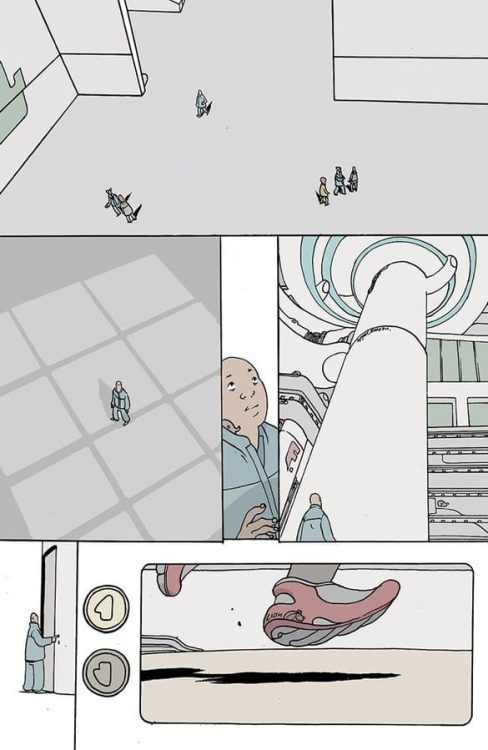 Like most comics, the true beauty and meaning “Rain Like Hammers” has is taken from the artwork, and Brandon Graham’s abilities as both artist and writer bring this book’s written and visual cohesion is as near-perfect as a comic can be. Graham’s quirky, minimalistic designs inhabit a gaping world devoid of personality, and this is exactly the point. Watching Eugene wander the massive near-empty rooms of Elephant makes the audience feel just as alone as he does. Stylistically, the art is definitely reminiscent of some of Moebius’s works, especially in the designs of the landscapes and the moving cities themselves. What’s so different in Graham’s work though is that his details are more pointedly obvious than they are just to make the world seem “real.” Everything in the city feels so sanitized, and every room looks almost the exact same as the last because that’s the point. We only get to see a few different rooms, from Eugene’s tiny apartment to the mess hall and to his office, and they all lack any sort of definition besides a couple objects and how Eugene interacts with them. The visuals make this story echo with both confused wonder and sadness and sadness. The color palette is scant and often dull, focusing on pale blues, grays, and pinks that engulf the entire page that they’re on, occasionally dotted by streams of abstract color. Eugene is often lit by the images of his television screen, which display a much larger variety of color than anything actually going on within the comic. Small details like these amplify the resounding sense of isolation that this book offers, even while its demonstrating its clever sense of humor. The lettering is a hand drawn and highly dynamic font that punctuates every moment with dialogue and narration in a manner that carves its tone across the panel just as much as the art does. This is a beautiful book in its own right, crafted in a manner that makes perfect sense for the kind of comic it strives to be. 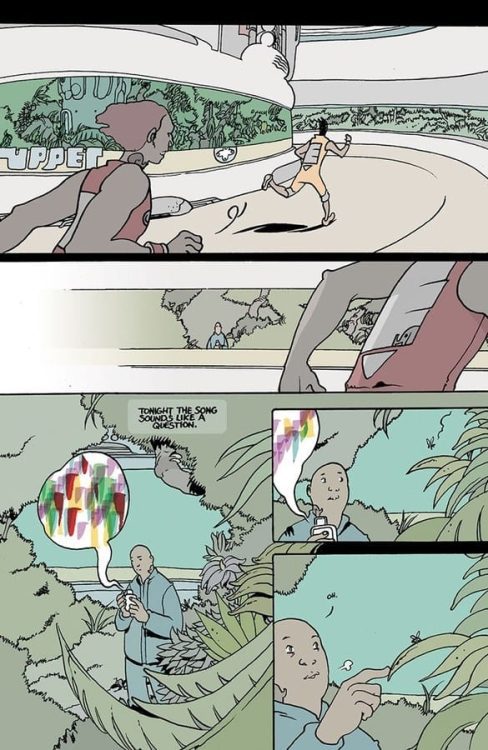 “Rain Like Hammers” #1 is an immensely clever, deeply sad, and frighteningly relevant comic for our era in history. Brandon Graham has crafted an opening experience that is a one part dialogue on depression, another part commentary on life in our society, and another part dystopian science fiction tale. The dialogue and narration is deeply poignant and wickedly clever, while the visuals are perfectly unorthodox in such a manner that this story could only be presented in. Do yourself a favor and grab a copy when it hits your local comic shop on 1-20.

A lonely and oddly breathtaking look at depression, change, and the used future we may find ourselves in.Review: RAIN LIKE HAMMERS #1 - Living The Stagnant Life In A Walking City