Eternals #2 from Marvel Comics publishes on February to further showcase this future MCU cast. Writer Kieron Gillen demonstrates the reach of these godlings in Marvel history. Artist Esad Ribic displays the stakes of this part of the greater Marvel world. This is all the more apparent in the coloring by Matthew Wilson, that makes events look like they’re being recorded in paintings. All while letterer Clayton Cowles gives this issue three distinct voices that interact and bring everything together.

Eternals #2: How Gods Look At Time

Gillen goes to lengths to display how the cast of Eternals #2 look at the world. To them, events and stakes are just records to do their tasks. For Ikaris, threats are only things to hit, no matter where they take place. Even someone as significant a threat as Thanos means very little to the politics of these godlings. Eternals like Druig are more focused on keeping their standings than worrying about Thanos. It’s an entire history lesson in-story.

With political tensions at an all time high in the real world, it’s easy for readers to feel the weight of some of these actions. Even if that means the reader doesn’t quite understand how Ikaris’ actions will turn out. The last time he tried to fight a monster, he mistakes the time it appears with the place. 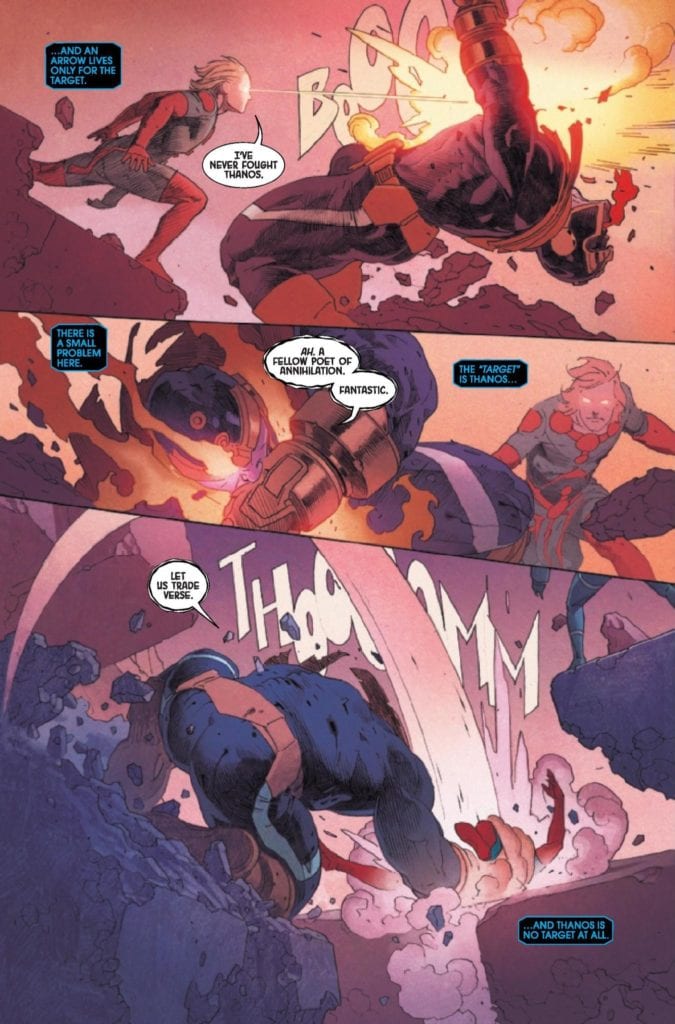 Eternals #2 has Ribic’s art show the angles and dynamic positions of the situation at hand. In Ikaris’ battle against Thanos for example, Thanos’ height and movement demonstrate his control over the situation. Which is incredibly ironic, considering the effects of the Great Machine. It helps Ikaris fight Thanos in many different time periods, through a series of portals. No matter how chaotic and familiar Ikaris is with his world’s resources, Thanos remains an ever-powerful threat to him. 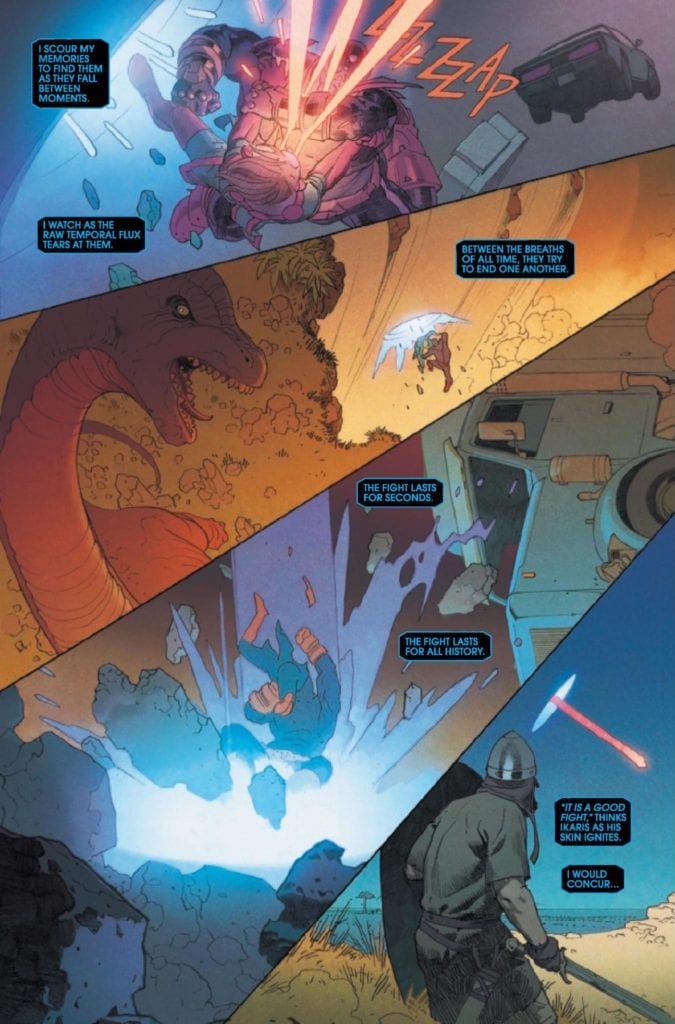 Wilson’s details in coloring give the above situation the feeling of an epic. Like a painting by Giovanni Bellini, the lines, shading, and brightness are an extension of an action taking place. Thanos’ apparent victory over Ikaris has so many details in it, that if not for captions by Cowles, it’d be a blink-and-you’ll-miss-it moment.

Cowles lettering does more than just guide readers, it provides context to character’s roles. The Great Machine with how it/she(?) speaks is like an omniscient narrator. Which is why the reader needs to pay attention when she speaks about a past event. It indicates that she has been tampered with. That’s why the marginally related Thanos is able to escape her gaze. With how Thanos’ word balloon looks distorted in comparison to most characters, it furthers how much of a threat he is.

Eternals #2: Prepare For The Next Epic Chapter

Eternals #2 is shaping up an already impressive series into something that can only be epic. Each member of the creative team collaborates to give weight and meaning in their roles. All while making the titular cast, in a world so unlike our own, looks fascinating yet detached. Something’s going on and the reader will want to stick around.

The Eternals see the world and time differently than we do in Eternals #2, and that's what makes them so grand in scale. For these gods, the present and future are one and the same.Review: ETERNALS #2: The Long Running Detachments Of Gods