In a series with rotating creative teams that has seen its share of escalating action, this issue brings the series to a close with a lot of jokes and maybe a few tears, but it is quite anticlimactic.

Readers discover the Scarlet Witch’s fate and a plan she set in motion with Doctor Strange to end the Genoshan zombie threat that comes as a bit of a deus ex machina. At the same time, Beast commits intellectual property theft again, Hordeculture.

One of the more touching parts of this issue is when the zombie Explodey Boy comes face to face with his (fully) resurrected Krakoan counterpart. The two have a very heartfelt conversation and catch up before zombie Explodey Boy sacrifices himself to end the Cotati threat by blowing up inside of the giant Cotati creature, causing all the Cotati to die Phantom Menace style. Likewise, as noted earlier, the zombie threat (from the actual zombies and Magik the “zombie queen”) also ends with ease.

Many readers may walk away wondering what the point of this story tie-in was, other than merely piggybacking on the main Empyre event for a chance to sell more comics. Perhaps the Hordeculture plot will pay dividends down the road, but there is no confrontation between the X-Men and Scarlet Witch, so while I initially believed this story might tie into the underlying Scarlet Witch/Pretender plot thread from the X-books, that doesn’t seem to be the case. But given the ease with which the big bad of Empyre, the Cotati, are dispatched, one still finds this series, as a whole, a bit vacuous. As Explodey Boy tells his zombie, this was “some kinda interesting stuff wrapped in a bunch of other not-so-interesting nonsense.”

One sequence that the art team creates to significant effect involves a flashback to Beast’s work with Opal on Krakoa. 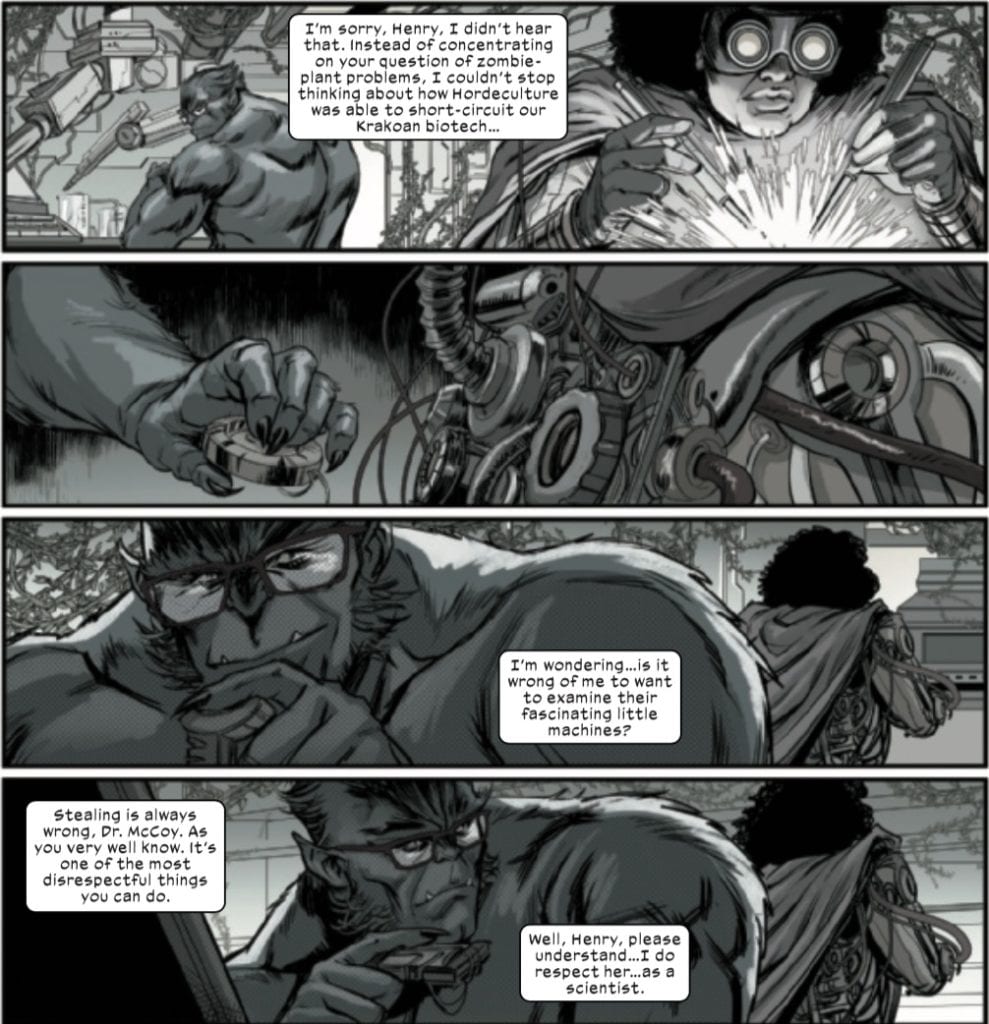 The use of black and white to indicate a flashback as we read Beast’s internal monologue plays well in this issue. It communicates Beast’s memory without relying on overly clunky exposition.

It was also refreshing to see the series return to the series-opening sequence, where Wanda was confronted by the horde of zombies and screamed in terror. While her final scream might have made readers believe she was overwhelmed by the zombie horde (although most likely not, given her presence in Strange Academy), we are reminded here what a badass she is. 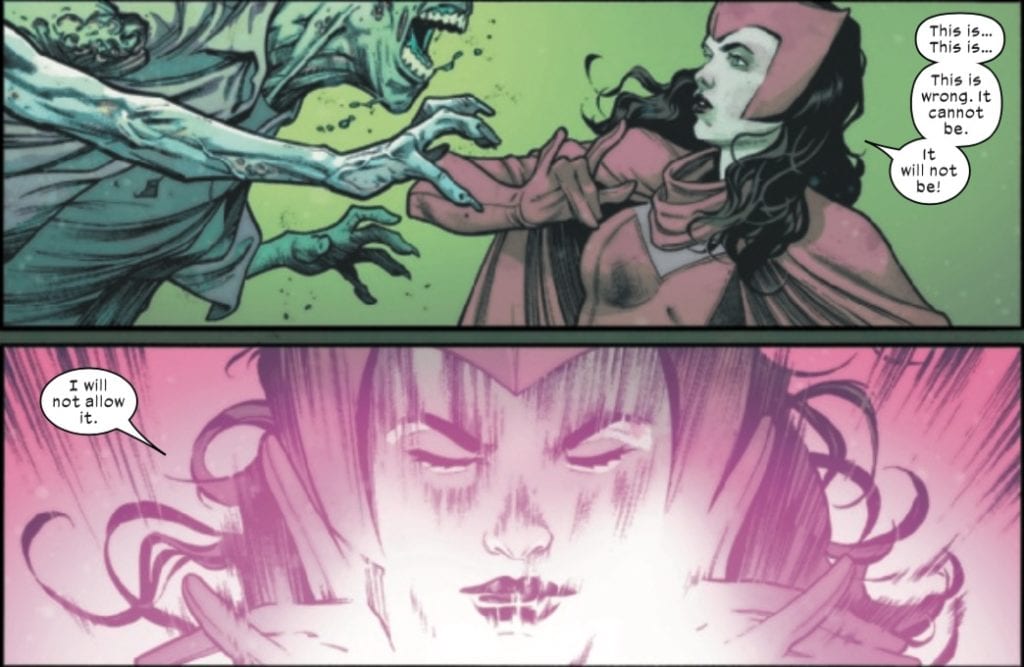 Wanda is no damsel in distress. She’s a powerful witch, and the art team does a fantastic job portraying her as the confident super being that she is, while still conveying in other places that she is a person carrying deep regret over her past actions.

As has been the case for the whole series, Cowles’s letters are great, and there are several really clever dialogue moments. As mentioned before, the interactions between Explodey Boy and his zombie are priceless, particularly a comment that might as well be a comment on X-Men continuity and storytelling over the past decade.

Another great humorous moment, in an issue with a lot of them, comes at the beginning of the issue when Wanda and Doctor Strange are looking for the materials to undo Wanda’s mistake. When the two of them go to Asgard to get a branch from the World Tree, the Asgardians suffer from a bit of deceit. 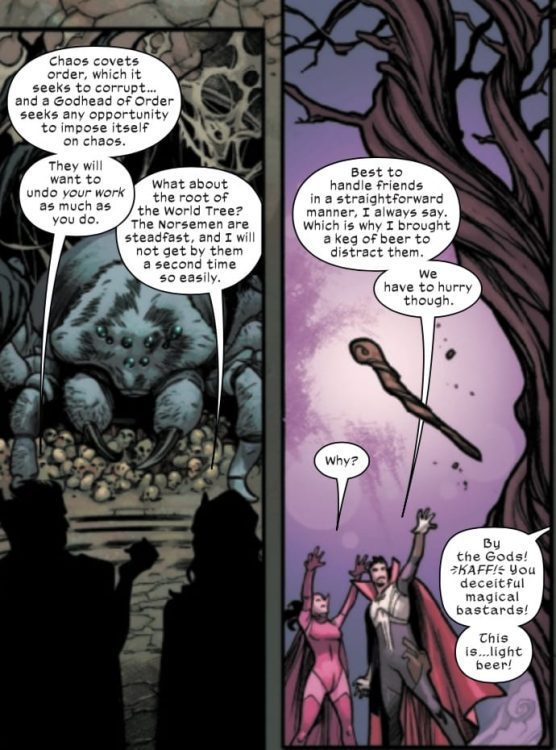 Cowles’s does an excellent job playing up the humorous effect here with his lettering. Magical bastards indeed!

Judged as a whole, this series is fine enough of a tie-in, even if the plot did feel randomly strung together at times, and ultimately, a bit pointless. Each issue ended with a cliffhanger whose role was acknowledged although to necessarily substantially built upon by the next creative team, who added their share of random escalation until the final issue when everything ended a bit anticlimactically. As a fun, crazy comic book story, it probably works. As a must-read for either Empyre or the overarching X-titles narrative(s), not so much. Perhaps Hickman and company will address Scarlet Witch’s tampering with Genosha when she finally faces a reckoning with Krakoa, but we’ll have to wait and see.

The Empyre tie-in series comes to an end! Find out the fate of the Scarlet Witch, Explodey Boy, and more in this somewhat anticlimactic final issue!Review: EMPYRE: X-MEN #4 - An Anticlimactic (Though Heartfelt) End