An ex-cop tries his hand at comedy because homicide is too easy in Dying is Easy #1, out this week from IDW Publishing.

Joe Hill writes this new mystery thriller outside of his Hill House Comics line. Most likely because this story reads more like a mystery than anything horror. The most frightening part of the issue might be the cop’s brand of humor.

It’s the exact material you would expect to hear from an ex-cop who’s had just about enough. Hill captures the grimey and insufferable traits of a disgraced cop extremely well. I’ve had a ton of experience with cops (unfortunately), so it’s always enjoyable to see an honest and truthful portrayal of police. It’s disgusting to hear what some people will say to other people just because they assume we’re like them.

Martin Simmonds captures the shady atmosphere of late night comedy clubs and bars filled with neon lights and smoke with perfection. His character designs are extremely on the nose. If our insulting detective was any more stereotypical he’d have a goofy hat and cigar, but instead just a Hawaiian shirt. He looks like a Florida cop, which would also explain his behavior. HA 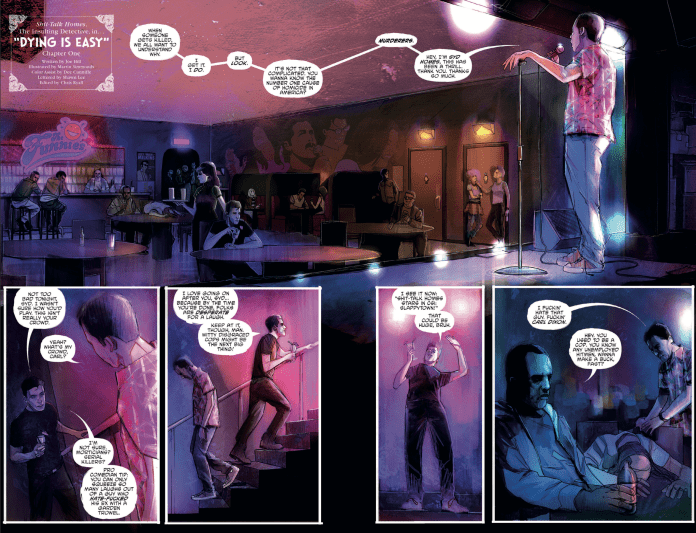 Dee Cunniffe’s stage lighting in a small venue is spot on. With one spot light there are blinding bright spots and extreme shadows. Light from the sides are usually from beer signs or cell phones. This is a place I’m sure we’ve all been before and had a drunkenly fantastic time. Cunniffe colored this issue like he had a specific venue in mind. Just looking at the comedy club panels reminds me of waiting to go on stage.

Shawn Lee takes care of the lettering for this murder mystery. There’s not much action from the walking stereotype’s comedy routine, but there were some laughs and crowd reactions. With the size and style of the crowd reactions you would expect there to be a packed house. It must be that the Joker is in attendance because the club looks mostly empty besides staff and the other comedians. 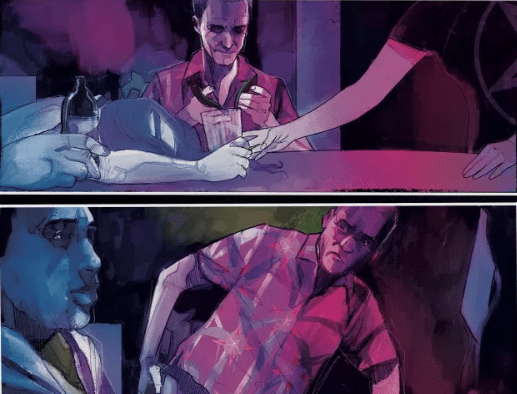 I think it gives an inaccurate description of the situation when there’s laughter covering up empty tables. I would expect much smaller lettering or the laughs to hover over one person to show that it is all one person being obnoxiously loud.

In my experiences, and on body cam video, we’ve all heard police joke about hurting people. Recently we saw body cam footage of police joking about pancakes after they murdered him, so the behavior from Shit-Talk Homes is no where near the worst things we’ve heard cops say. 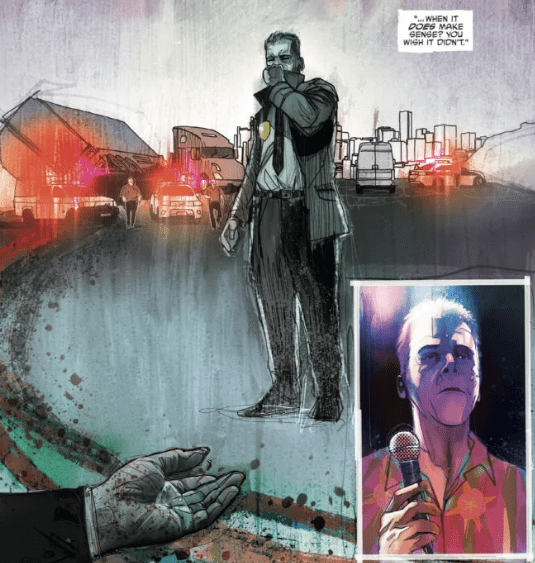 The actions Homes is accused of in this story don’t sound that awful. Especially after the delinquent murder hungry cops in the news this week playing Punisher with civilian vehicles as cover as they murder some jewel thieves and the hostage, (who was on his FIRST DAY as a UPS driver). I bet Joe Hill tried to think of something truly heinous, but the cops in real life were like “Hold my beer”.

I digress, but Hill has created a character to care about in Dying is Easy #1. Even if you want him to die horribly, that’s still caring. A highly hated character is more appealing anyway. People want to see the villain fall to their karma. A triumphant hero is getting old and boring. 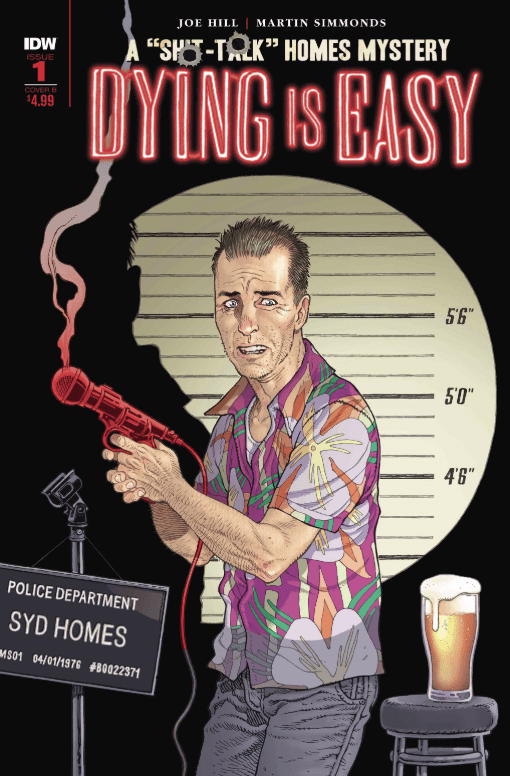 All that being said, cops make many enemies every day. There’s no telling who might have set up the insulting detective. Maybe next issue we’ll see him get a little taste of his own medicine?

What did you think of Dying is Easy #1? What do you hope happens to Syd Homes? Let us know in the comments below.