From contemporary comics powerhouse Daniel Warren Johnson (Murder Falcon, Beta Ray Bill) comes a wrestling comic full of genuine heart and absolute kick-assery in Do A Powerbomb #1. Featuring colors by Mike Spicer, this opening issue is full of hope, tragedy, and absolutely incredible action. With a powerful script, an unexpected genre-blending twist, and Johnson’s usual medium-best art, this love-letter to wrestling and family is the absolute must-read from the Image roster this month.

“Lona Steelrose wants to be a pro wrestler, but she’s living under the shadow of her mother, the best to ever do it. Everything changes when a wrestling-obsessed necromancer asks her to join the grandest pro wrestling tournament of all time, which is also the most dangerous! It’s The Wrestler meets Dragonball Z in a tale where the competitors get more than they ever bargained for!” 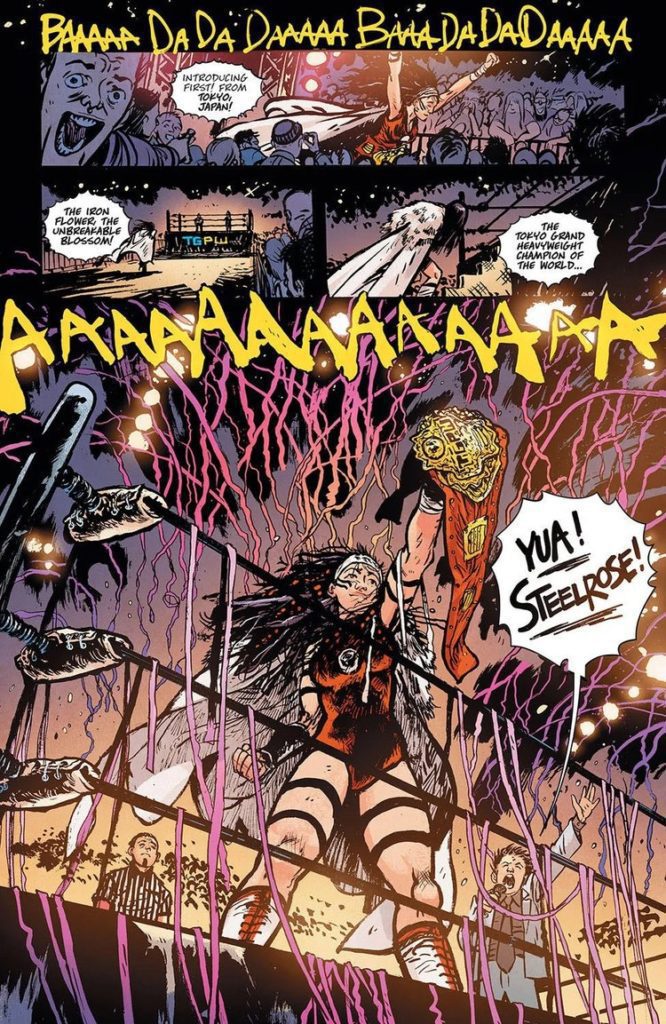 When handled skillfully, familiar tropes can and will still pack a huge punch. Johnson does just that with the story here in Do A Powerbomb #1. This comic takes inspiration from hundreds of other stories with the whole “continuing a legacy” plot, but here it’s handled with such genuine emotion and shock that it still comes out as very compelling. Seeing Lona Steelrose and her family together rooting for her mom, the greatest wrestler of her time, is some truly inspirational stuff. There’s a real heart to Johnson’s character writing that makes the familiar elements in this story just feel so good to read. When the tragedy strikes, it lands painfully. It is truly surprising just how much impact the turn of events in this has, and it’s all because of how great Johnson is at creating emotional sincerity in his work.

Outside of the strictly character-focused dialogue and plot-building, this comic feels absolutely epic. As someone who isn’t into wrestling, this issue hooked me with just how unbelievably cool the sport is presented here. Most of this is in how Johnson draws it, but there’s a lot of great energy in the writing as well. The writing for the announcer as the wrestlers make their way to the ring had my hair on end, and the banter between the two fighters is the perfect blend of hokey and badass. The big genre turn at the end of the book is the perfect cap to this high-energy love letter to wrestling and comic book-style fantasy action storytelling. Much like Murder Falcon, Johnson wears his influences on his sleeves and it absolutely rules. 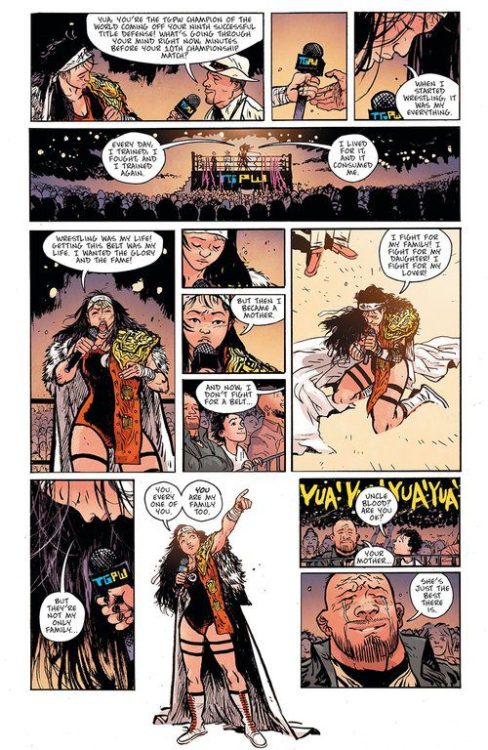 It isn’t exactly a surprise that Daniel Warren Johnson’s art in Do A Powerbomb #1 is, in professional terms, rad as hell. The Wonder Woman: Dead Earth creator’s pencils and page compositions will draw readers into their scenes with detail then give them whiplash with the sheer ferocity of his action sequences. His characters are all memorably designed, and this goes triple for his excellent wrestling costumes. The spectacle of the wrestling ring and the match that ensues in the first half of the comic is easily one of the most memorable sequences in recent comics. The choreography? Utterly phenomenal. Johnson’s love of wrestling explodes across every panel with spot-on accurate moves that are perfectly exaggerated when they need to be. The whole comic’s aesthetic is so explosively energetic that by the time the setting change occurs at the end, it’s a surprise – but it totally works. There’s such an over-the-top display of the love of both wrestling and the comics medium comes out in Johnson’s ability to craft absolute visual dynamite. Intimate, emotional moments land with perfect sincerity because of how Johnson builds and frames the scenes.  Every positive said about the writing before is truthfully only so good because the art is doing the actual lifting for the story. This comic is an absolute marvel of visual storytelling, and I cannot wait to see what happens next now that the story’s big genre-bending twist has been revealed.

DWJ’s frequent collaborator Mike Spicer is on hand with the colors for Powerbomb, and as usual, the man absolutely destroys it. Spicer perfectly adds even more vivid energy and dimension to Johnson’s already stunning pencils. Every panel and sequence has just the right atmosphere and energy thanks to the colors. The lighting in the ring gives the sequence an audible effect that rarely feels so intense when reading a comic. The somber or quiet moments are toned down with darker and calmer hues. When the weird, out of this world stuff hits, it feels like the reader is stepping out of AEW and into He-Man. Finally, Johnson’s own letters are every bit as much a part of the visual experience as the pencils and colors. His hand-drawn fonts shrink and explode with every line, and his SFX bring nothing but pure power to the sequences. This is, visually, an adrenaline rush of a comic and a screaming example of what makes this medium so special. 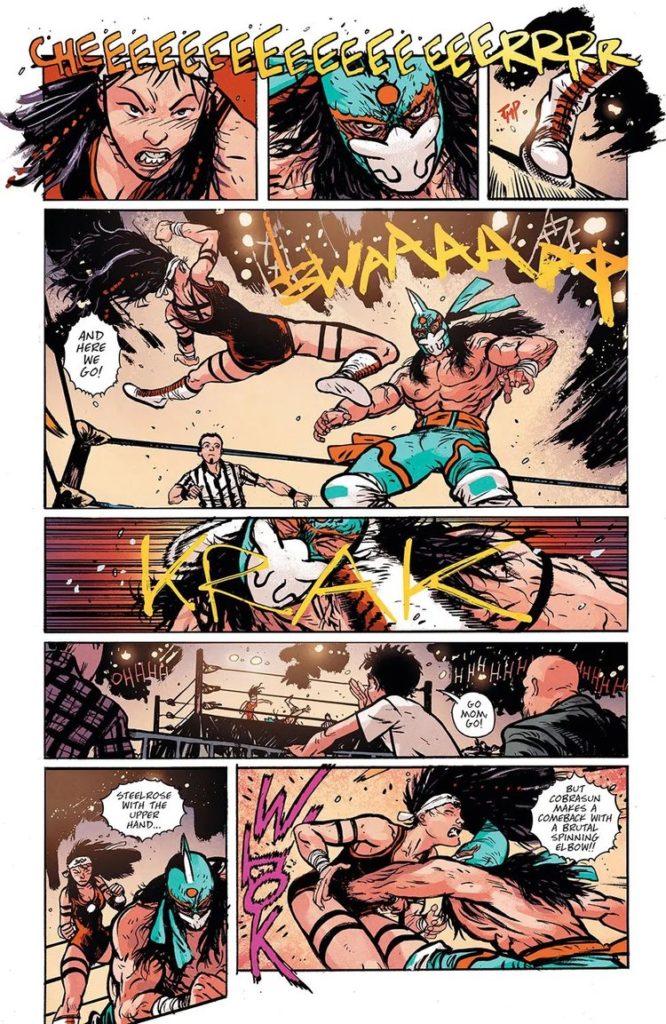 Do A Powerbomb #1 is an absolute marvel of a comic book. A perfect blend of massive thrills and genuine emotional weight, Daniel Warren Johnson crafts a beautiful and powerful love letter to comics and wrestling. With help from Mike Spicer’s colors, this is easily one of the most powerful, creative, and wildly kickass debut issues of the year. Be sure to grab this new release when it hits shelves on June 15th!

Daniel Warren Johnson is back again with a pro-wrestling comic full of heart, emotion, and absolute ass-kickery of the highest quality. Review: DO A POWERBOMB #1 - Heart And Power From The Top Ropes