From ever-rising mega-talent Ram V (These Savage Shores, Swamp Thing) and master of atmosphere Rafael Albuquerque (Black Beetle, Night Of The Ghoul) comes a Batman comic with a veneer of gothic horror in Detective Comics #1062. Featuring colors by Dave Stewart and lettering from Ariana Maher, this issue’s main story is Batman at its most mysterious and unnerving. With a stellar backup from The Dreaming writer Si Spurrier and artists Dani, with more Dave Stewart colors and Steve Wands on letters, this is a Bat-comic that poses haunting problems for Bruce and his allies – and the most genuinely dread-inducing thematic elements in a DC comic in years.

“Something is terribly wrong with Batman. No matter the tests Bruce takes, nor the numbers he counts, the greatest detective in the world can’t pin down the source of this creeping dread—of his own inner demons and a looming mortality. Meanwhile, real demons roam the shadows as an ancient melody haunts the Gotham night. Here now the curtains rise and as the eerie tune streams in…who is human, who is demon, who is to tell? As Batman investigates the songs and the demons of Gotham, he is forced to confront the oldest question…whether there has been a demon within him all along…and if so, what does it want…and why hasn’t it taken over yet?” 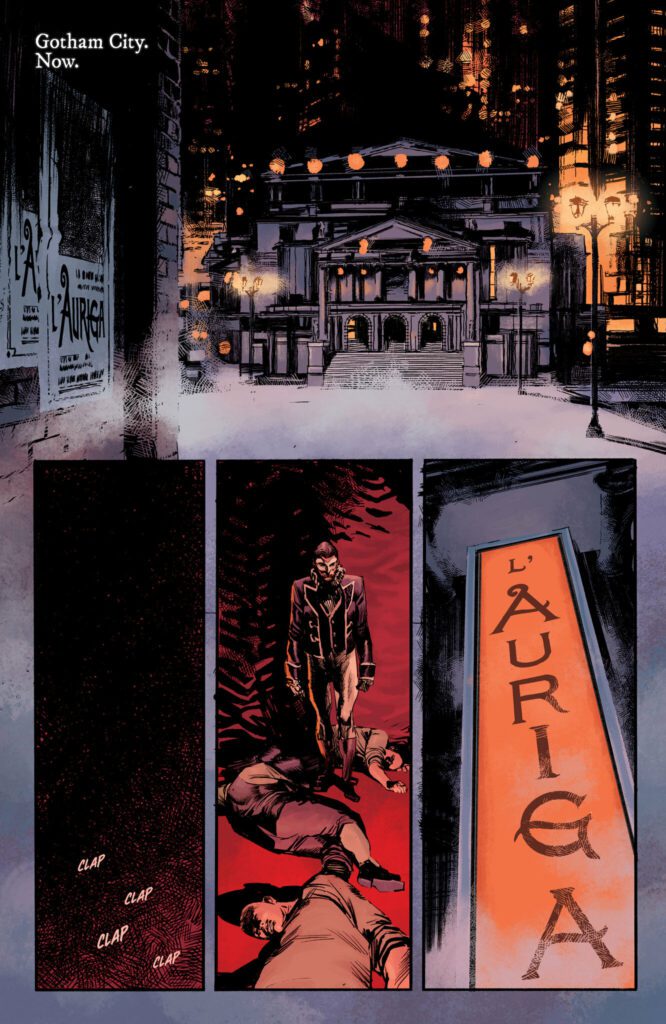 True to his form, Ram V pens an exciting and poetically rich script for the start of his run here in Detective Comics #1062. Loaded with symbolism and leaning into the evocative, gothic imagery of Gotham and the Batman story, Ram brings something ancient and foreboding into the life of the titular detective. Opening with a stirring opera sequence loaded with what is likely the most striking approach to discussing Bruce’s origin since the Morrison era, working through increasingly foreboding warnings about an approaching enemy, and ending on some genuinely interesting issues with long-term ramifications, this is the most fascinating single Bat-comic in years. Batman – Bruce, really – is getting older. While this has been dealt with in numerous out-of-continuity Batman comics, this is the first time it’s been discussed as a possibility in canon. This, Bruce’s denial of such a possibility, and the looming specter of a powerful evil encroaching on Gotham all make for a thematically loaded Batman comic. This new foe Ram has just teased for us so far is reminiscent of The Black Glove and The Court of Owls, but more alien and potentially far older. In fact, Ram seems to be pulling from concepts crafted in Morrison and Snyder & Capullo’s runs, but with his own stylistic flair. Make no mistake though, this is absolutely as Ram V comic. This first issue’s influences are felt in its plot and the construction of Batman’s new foes (so far anyways), but the sense of ethereal gothic horror on display is something Ram himself brings out in unique ways.

Si Spurrier’s script for backup story, “The Coda,” fits perfectly with the vision of Gotham that Ram has made for this new chapter of Detective Comics. The first of three parts, this story sees former police commissioner Jim Gordon returning to Gotham. Listless and feeling without purpose, Gordon accepts a job tracking down a woman’s lost son. The journey takes him back to the ruins of an abandoned Arkham Asylum, where more almost supernatural horrors appear to await. True to form, Spurrier’s writing is dense but thematically rich. His script consists mostly of Gordon’s internal narration via a journal he keeps. This gives the short story a definite noir aspect, but it’s muddled by Jim’s sense of purposelessness and the unusual horror-esque nature of what he uncovers while exploring the ruined asylum. Some may find Spurrier’s writing to be a bit much for a visual medium, but those who can appreciate his use of atmospheric and naturalistic prose within this dark mystery will no doubt be satisfied. 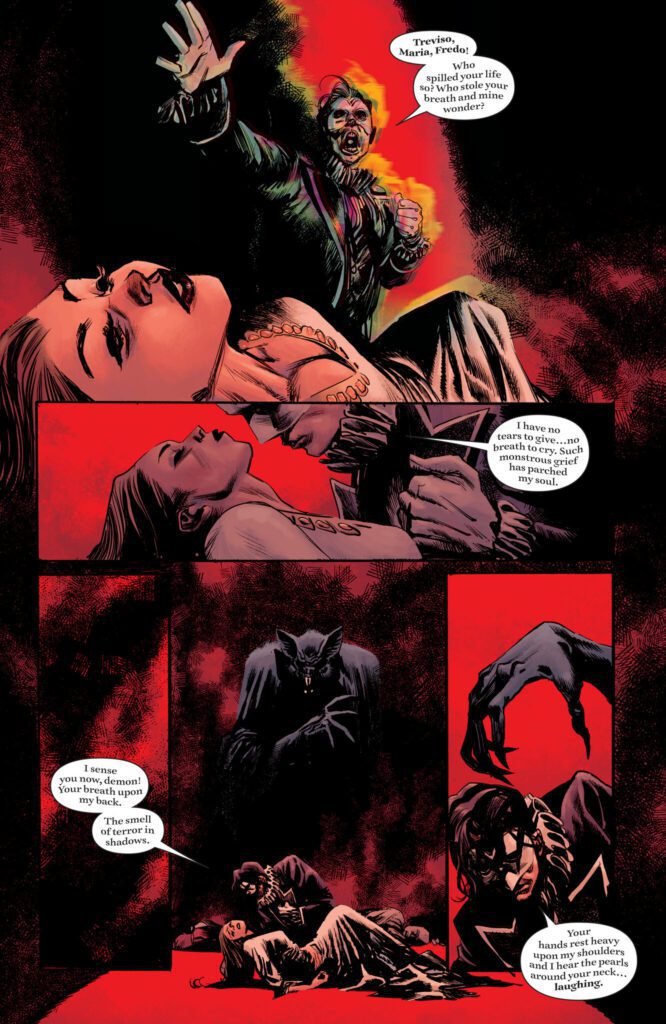 Crafting the visual experience for the most haunting and horror-influenced Batman comic in over a decade requires a master of atmospheric art. Fortunately, Rafael Albuquerque is the talent for the job in Detective Comics #1062. He pairs off with Ram V’s script in spectacular fashion, creating an ethereal gothic experience from the opening page and on. His opening sequence, an opera with a dark Victorian aesthetic and looming spectral bat, immediately sets the tone for the rest of the book’s looming dread. Albuquerque is already known for his talents in crafting horror comics, with his previous work with Scott Snyder on American Vampire and Night Of The Ghoul. Here, his horror elements are slightly more subdued to also do the work of being a Batman comic. His range in the book is immensely impressive, as his dead-inducing nightmare sequences trade blows with big superhero action with Batman fighting monsters, criminals, and meeting unexpected old foes. One unique and memorable scene was the introduction of Batman new encroaching foes as seen in their own home. This passage looks like something out of a science-fiction or fantasy comic, rather than a Batman book, and it sticks out due to Albuquerque’s stylized architecture and character design choices. There’s an almost mural-esque sense to how Albuquerque draws and constructs his sequences, and it matches the stage-play narrative device wonderfully.

Dave Stewart’s colors on both the main story and the backup are tonally perfect. The veteran colorist achieves similar aesthetics in both stories, but with different approaches. His work over Albuquerque’s pencils is enshrouded in shadow and ethereal, dreamlike haze. Even the moments that aren’t in Bruce’s head are covered in Gotham’s urban fog or take place in dimly lit rooms. Stewart’s atmospheric work is so dense it looks as though it could be cut by a knife, and it perfectly caps off the style needed for this story. The work on the backup drawn by Dani is similar, but noticeably brighter and more naturalistic. Without Batman’s potential internal struggles and visions of a great bat-demon, the story following Gordon allows for more conventional interior and street lighting. The unnatural effects still come into play of course – there’s a stirring scene with the dilapidated asylum looming in a white background. For the most part though, this story is handled with a more natural-looking approach than the directly horror-focused main story.

Speaking of Dani’s art, his work on “The Coda” is singularly impressive and wholly unique, managing to align with the aesthetic set in the main book but also with a different approach. Dani’s work isn’t as conventional or “clean” as Albuquerque’s, but instead utilizes a heavily cross-hatched and differently atmospheric style. There’s a classic Vertigo sense with Dani’s heavily penciled artwork, and coupled with his direction gives that ruined sense – for both a listless Jim Gordon and an abandoned asylum – to the story. The lettering from Ariana Maher in the main story and Steve Wands in the backup is inventive and brilliant. Both of their works are easily readable but shift dynamically with the story, altering how the reader perceives the words in perfect unison with the art. Maher’s work specifically, in the dreamlike sequences, takes on a wavering, musical quality that matches the scenes’ operatic setting. This is the most interesting lettering in a DC comic this year. Overall, this issue of Detective Comics is a staggeringly gorgeous comic, with nearly unmatched atmospheric work in the mainstream world. 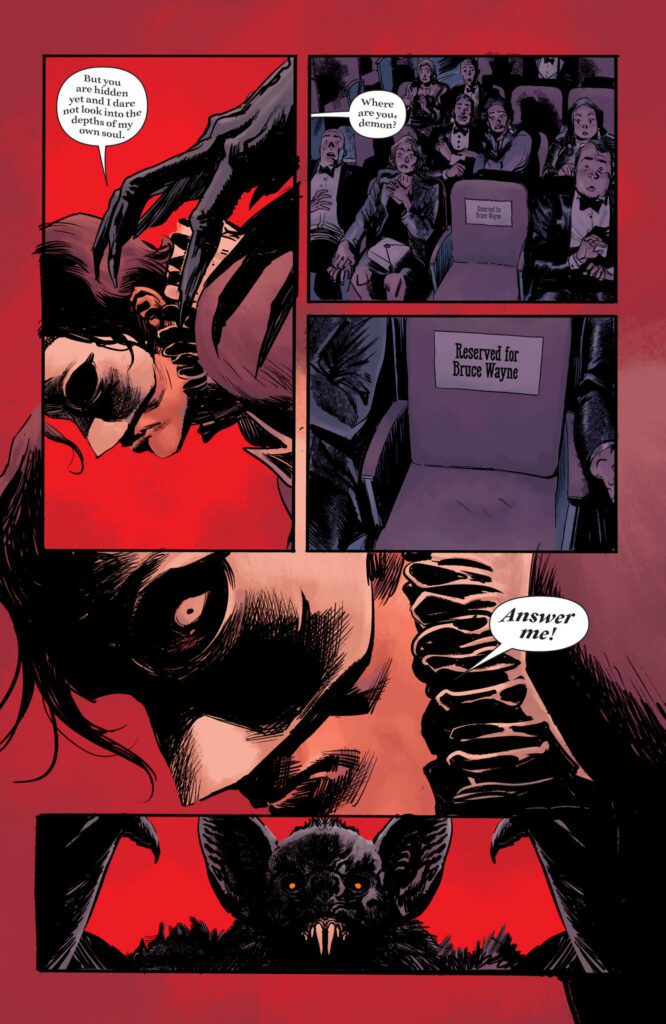 Detective Comics #1062 is the beginning of a potential masterpiece. Ram V’s script is meticulous, haunting, and conceptually rich, adding some of the most intriguing new pieces of Batman lore since the Court of Owls. The visuals from Rafael Albuquerque and Dave Stewart are beautiful, foreboding, and carefully composed, making for some of the most memorable single panels in all of Batman comics. The backup story from Si Spurrier and Dani is a stellar cap to this brilliant new chapter in the story of Gotham’s Dark Knight, promising a gothic horror and mystery unlike any we’ve seen in a Batman comic in many years. If the rest of this run is as strong as this first issue, we could very well be looking at a Batman run in the same league as Snyder & Capullo’s and Morrison’s. Be sure to grab this incredible new issue when it hits shelves on July 26th!

Poetic and unsettling, Detective Comics #1062 sees the beginning of Ram V and Rafael Albuquerque's run with something ancient slithering its way into the heart of Gotham - and the Dark Knight itself.Review: DETECTIVE COMICS #1062 - Gotham Nocturne