*Spoilers For These Savage Shores*

Published by Vault Comics in 2019, Ram V and Sumit Kumar’s historical horror mini-series These Savage Shores is a complex tapestry of genre-blending. One part mythical monster horror, another part historical colonialism narrative piece, and finally also a romance comic, this acclaimed comic is as insightful as it is bold. Along with colorist Vittorio Astone and letterer Aditya Bidikar, V and Kumar craft an 18th century tale based on the slow overtaking of India by the East India Company and the British Crown from a perspective we had very seldom seen in the comics – or any – medium here in the West. The careful mixing of outright horror, political commentary, and love story come to a head in the closing sequence of the comic’s penultimate 4th issue. Hitting all of the story’s core ideas in a flawless composition of terror and pain, the ending panels and striking final page come together to form a chilling, powerful moment inside an already astounding series.

As an immortal shapeshifter known as a Raakshas, Bishan is no stranger to the conflicts of men. However, there is a gravity to this war that feels different to our main character. The conflict at hand is between a faction of India who have taken arms alongside Britain and the East India company, against those who would retain India’s trade and independence. Bishan, naturally, is on the side of the latter. While I’m certainly not the one to make any kind of commentary on Indian politics or history, it’s fair to say this war would reach far into the future for how this country is acknowledged in the world. The implications in the narrative would have the reader believe that this war is in many ways one for the soul of a country and its people. The sequence we’re addressing is that entire argument in a 2-page, eleven-panel spread. 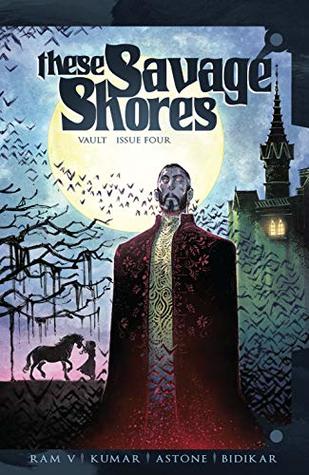 Bishan returns to the home of his human master and friend in Vikrampura tattered, bloody, and worn from fighting a losing war. He’s spent much of the last several months in his bestial form, slaughtering enemy soldiers in guerilla ambushes and living the very legend of this land’s nights being “full of teeth.” Leaving for war also meant leaving behind the woman he loves – Kori, a dancer and arguably the one thing tethering Bishan to his remaining humanity. Giving into his brutal nature and staying in the fields seeking vengeance upon his allies’ enemies has allowed for new horror from a new world to step in. Vampires from England, seeking revenge for one of their own who was killed by something far older and more dangerous, ride into Vikrampura. They do not find their quarry, but they do find his lover. This is all where the tragedy and heartbreak of this sequence lies. Killing her would be too easy. Robbing her of the sun and beauty of the daylight in her homeland? Tormenting Bishan by presenting his love in a form that will never know warmth or humanity again? By their standards, a much more effective punishment. 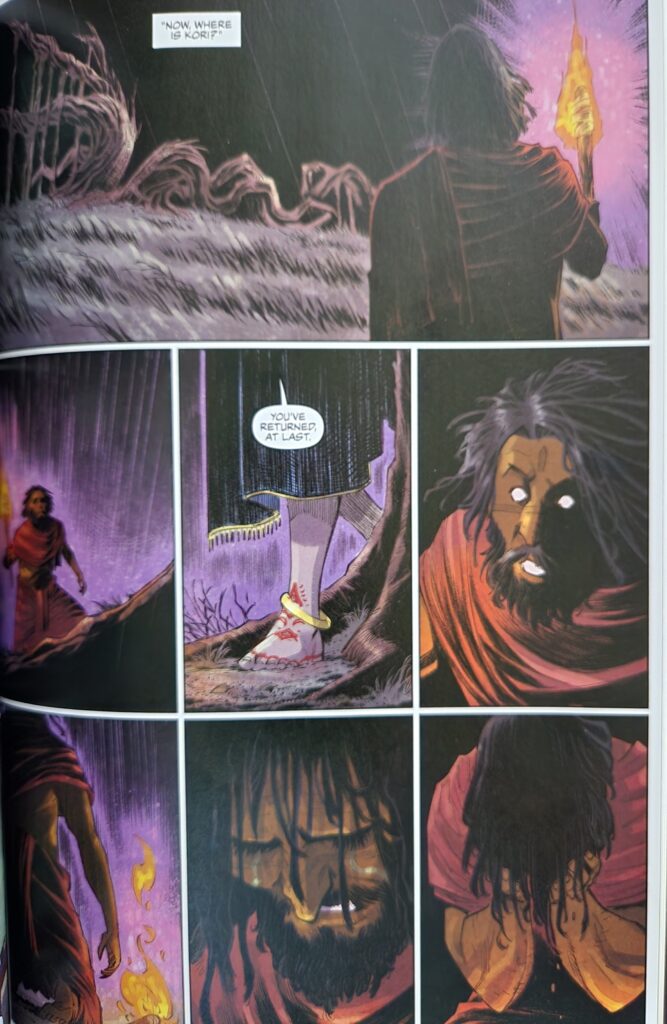 The sequence takes up the last two pages of issue #4. Bishan’s search for Kori takes him back to their Alada tree, a meeting place for the pair for years. Kumar draws it in the near distance as Bishan surveys it with a torch, its lightning-scorched and gnarled remains are all that is left of this monument  – to the couple, and to the land itself. As he draws closer the layout shifts into a 6-panel grid. Each panel here is a piece of Bishan’s reaction to finally finding Kori – and realizing what has happened to her. Kumar perfectly frames the immortal’s reaction as his lover steps into the torchlight. Ram V and Sumit Kumar have built this chapter carefully enough that the reader should already know what Kori is now. Still, that doesn’t change the tension on the page as both we and Bishan see her for the first time since the end of this book’s war. A henna-painted leg steps into view. However, where once was the brown skin of an Indian woman has now been replaced by the lifeless pallor of a nocturnal immortal. The contrast of a traditionally Indian physical piece against an almost glowingly pale background made so stark by Vittorio Astone’s color work. Kori speaks to Bishan here, a punctuation on his recognition of his love as he sees her again. Then, the full weight of realization hits him in the following panels. Bishan’s torch hits the ground beside him, and he falls to his knees in tears. The following page, and the final page of These Savage Shores #4, is the full reveal of Kori the vampire. Kumar and Astone’s representation of Ram V’s script here offers incredible complexity within the page’s four panels. Lori looks upon a kneeling Bishan with a mix of emotions. Love is still there, yes – but now it is joined by pity, and even slivers of anger and resentment. After all, Bishan losing himself to his primal nature while at war is what allowed this chain of events to occur. The second panel focuses on the bite marks and Kori’s new fangs, a shot that reinforces the undercurrent of sexual assault in regards to what she went through. She reaches out in the third panel, touching Bishan on the head before delivering her climactic dialogue line. As she has asked Bishan to recount “how he was made” dozens of times over as their relationship went on, so now does Kori after the violation and nightmarish transformation she has undergone. It’s yet another contrast, where something that once had a beautiful meaning and source behind it has soured into something corrupt. The final panel itself, taking up the bottom two-thirds of the page, shows Kori’s full form. Cloaked in black robes and pale skin and glowing, nocturnal eyes, the reader sees in full form what drove Bishan to his knees. The beauty of Kori’s form is still fully intact, just now with a terrifying meaning behind her change in appearance – and all of the unspoken horror she has gone through, and still will go through, because of her lover’s absence.

The main reason why this two page sequence at the end of These Savage Shores #4 is so effectively perfect is not just because of Sumit Kumar and Vittorio Astone’s immaculate detail and flawless composition – although those are major contributors. In truth, this sequence encapsulates everything this mini-series touches on thematically. These Savage Shores as a whole is about colonialism. Specifically, it is obviously about the colonial effect of Britain and the East India Company on the country of India. Vampires, shapeshifters, and mythology are primarily vehicles through which the sub textual aspects of the story are explored. The plot between Bishan and the vampires is a direct parallel to the political conflict throughout the story. England’s vampires are an old and powerful threat. One of their number makes the mistake of coming to India – a much older world full of things fare more ancient than vampires – and treating it as they would the new world of England. This first vampire on the scene is then killed by Bishan for his hubris. More vampires arrive in retaliation, thus what happens with Kori.

Both Bishan and Kori’s fates are entwined with India itself. Yes, the pair will live on after their encounters and Bishan’s war – but nothing will be as it was, and the haunting reminders will with the couple for all time. India’s steady colonization by the British is much the same. Yes, India still exists and aspects of it are the same as they have always been. However, the subjugation of its populace, trivialization of its culture, and the loss of overall autonomy the country once had over itself will leave the nation scarred and changed. Even now, decades after India has regained its independence, the century of British occupation, and even longer as a “trade partner” with The East India Co., has left indelible marks upon its culture and how India is viewed in the world. These Savage Shores is a narrative about the loss of something an ancient, thriving nation once had and – in ways I’m not equipped to discuss – how that loss was in some ways self-inflicted. The final two pages of These Savage Shores #4 are this comic series’ thematic core made manifest. This is a perfect sequence in one of the medium’s best stories of the past 20 years.