Review: DETECTIVE COMICS #1035 is the Start of a Whole New World

Detective Comics #1034 was brilliant, but it was also a rather straightforward issue. We met some new characters, were introduced to Bruce’s new norm, and were left with a final cliffhanger. But DC Comic’s Detective Comics #1035 is a different story. It takes all of the same characters we saw in the previous issue and shows that there’s a life to each of them. Writer Mariko Tamaki, artist Dan Mora, colorist Jordie Bellaire, and letterer Aditya Bidikar aren’t just writing a story, they’re building a world. 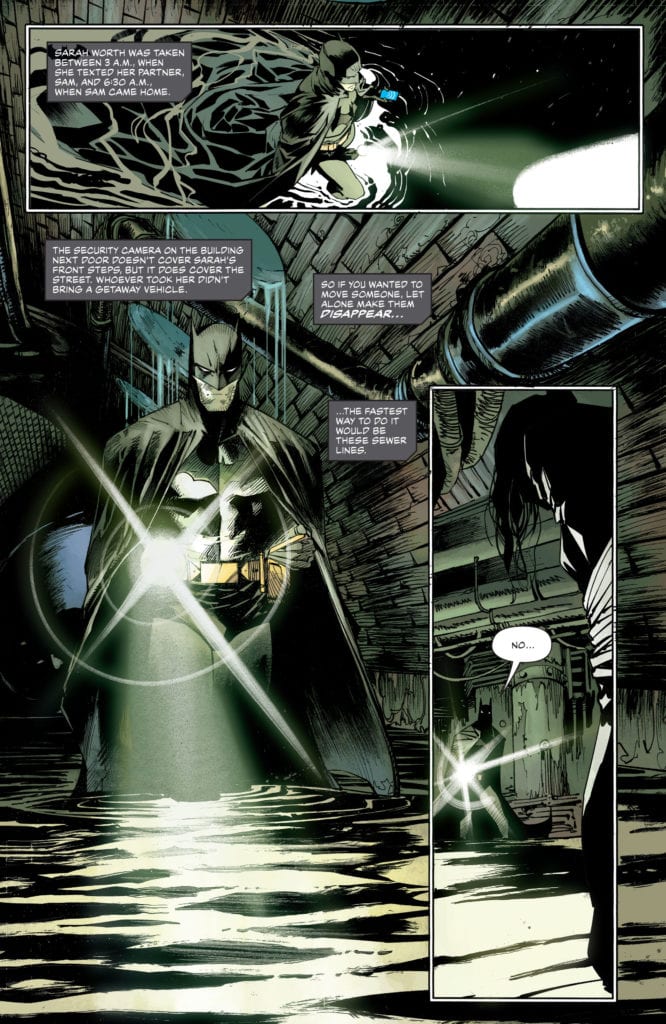 In Detective Comics #1035, we see the basic premise of Tamaki’s run begin to fracture into more threads. It’s no longer one story, but the start of many. With the inciting incident of Sarah Worth’s murder, Tamaki brings in all kinds of new plotlines. Tamaki also promises, for each plotline we thought we knew, that there is something deeper. We meet Mr. Worth, Sarah’s father. He immediately seems like a man with a dark past, who now has a huge grudge. We, as readers, also seem to know who killed Sarah. At least, we have some strong suspicions. But even in that, Tamaki has us drawn deeper into guessing at the reasons why. And with one final cliffhanger, everything we know gets thrown into question. Tamaki is brilliantly setting up question after question, building up the mystery of what’s turning into a fantastic crime-thriller.

Mora’s pacing is magnificent. His page layouts often involve overlapping panels, moments that seem to happen all at once. But in one particular page, he slows everything down. We follow Neil, a mysterious new character who is also our prime suspect. On one page, he’s speaking to the mayor, getting out some pills. The page is crisp, clean, and completely traditional: 5 panels with a thin, white gutter between each. In the context of the rest of this issue, the page is almost boring. But then Neil drops his pills on the floor, and all Hell breaks loose. The next page shows panels twisting and tumbling down the page, some morphing into a completely different shape, with characters barely inside them. Mora sets this up by having a normal, traditional page ahead of it: the calm before the storm. For that reason, this wild page packs so much punch.

Bellaire’s coloring, as is common in Batman comics, is quite muted in this issue. We see Batman running through sewers or people having board meetings in dimly lit rooms. Everyone is either shown in the dark, or the colors of their face are muddled by the lights of screens and billboards. But there’s one scene where the coloring is warm and full of flesh tones. That’s the scene of Mr. Worth talking about the death of his daughter. This is fantastic because it makes Mr. Worth’s pain feel real and human. He’s just himself in that moment. There’s no façade, no putting on of airs to the scene. It stops the reader because it stands out. We can’t help but feel and connect to Mr. Worth’s pain, a colorful moment in a bleak world, even if feeling his pain is hard to do. It’s a fantastic choice that forces the reader to not just read this comic, but to feel it too. 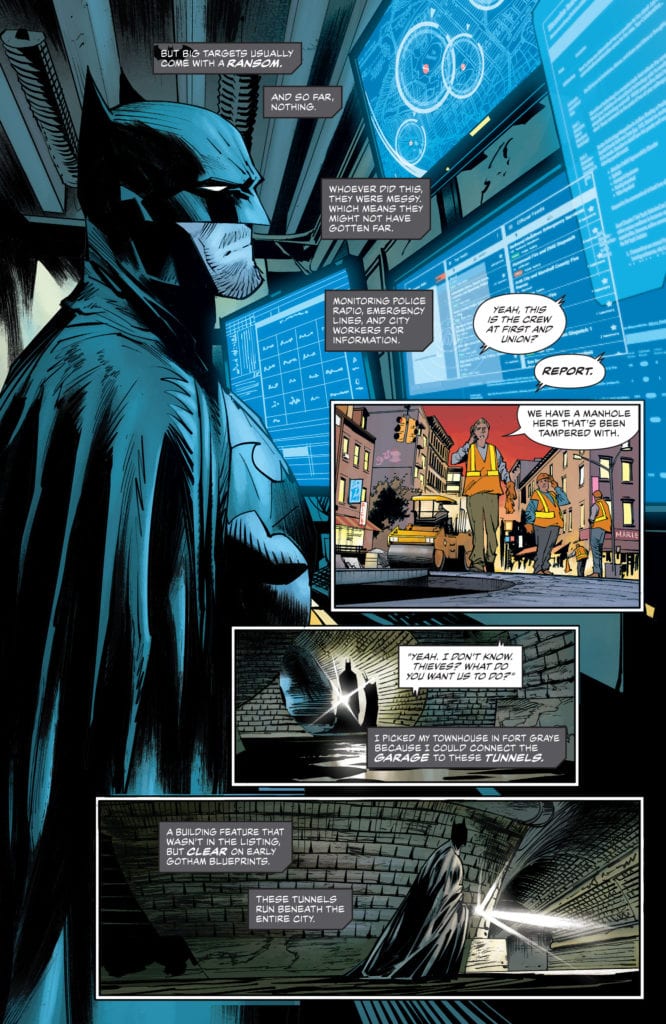 Bidikar’s lettering is always fun to read. There are brilliant little moments, like a bullet speeding through the noise it’s making, or the lettering of a “WHIIIIIIP” noise actually whipping around on the page. But Bidikar also underplays a lot of moments. They don’t overdo sound effects or dialogue, so that they can pick their big moments carefully. And their big moment in this issue is the same as Bellaire’s. It’s Mr. Worth’s dialogue that jumps off the page. “My daughter is gone. And nothing is right until I have justice.” The lettering is huge, scrambled, and desperate. “Gone” is written in larger font to emphasize it, while “justice” is written in giant, red block letters. Mr. Worth is the new driving force of this series and Bidikar won’t let us miss why he’s shown up.

Tamaki, Mora, Bellaire, and Bidikar are doing beautiful work. They’re showing us that every character they’re introducing is there for a reason. And as we learn about their lives, the plot continues to spread out into this vast world they’re creating. Pick up Detective Comics #1035, out from DC Comics April 27th, at a comic shop near you!

Tamaki, Mora, Bellaire, and Bidikar are doing beautiful work. They're showing us that every character they're introducing is there for a reason. And as we learn about their lives, the plot continues to spread out into this vast world they're creating.Review: DETECTIVE COMICS #1035 is the Start of a Whole New World