This is not your grandmother’s Detective Comics. Hell, it’s not even the Detective Comics of your slightly older brother. No, writer Mariko Tamaki, artist Dan Mora, colorist Jordie Bellaire and letterer Aditya Bidikar are making Detective Comics their own! With Detective Comics #1034, the start of their collective run on the series and a follow up to their fantastic Future State run, this creative team is going full speed in a new direction. The biggest new character to watch out for is some guy called “Bruce Wayne.”

Of course, Bruce Wayne has actually been in Detective Comics before, but not like this. Tamaki isn’t writing Bruce as the man waiting for the sun to go down so he can kick but. She’s writing him into new, uncomfortable areas. Thanks to Bruce’s incredible wealth, he had the luxury of keeping everyone at arm’s length. But due to the events of the Joker War, Bruce is now living in an apartment. He’s begrudgingly getting to know the neighbors, even attending a party or two. It’s odd, frankly. Just one issue ago, Batman was as he’d always been. Mostly just Batman kicking butt with the occasional cameo by Bruce.

It’s tempting to fault Tamaki for this bold, new direction. Seeing Bruce getting hugged by an overzealous neighbor seems… very different. But, as readers, we’re simply sharing in Bruce’s discomfort. We can feel his rising anxiety as all of his secrets get that much closer to the light. So, Tamaki’s script is actually brilliant. It’s hard to read at times but that’s because we feel so much for the character. Tamaki is showing us the vulnerable, human side to Bruce Wayne. In some ways, it feels like a brand new character, and I can’t wait to get to know him. 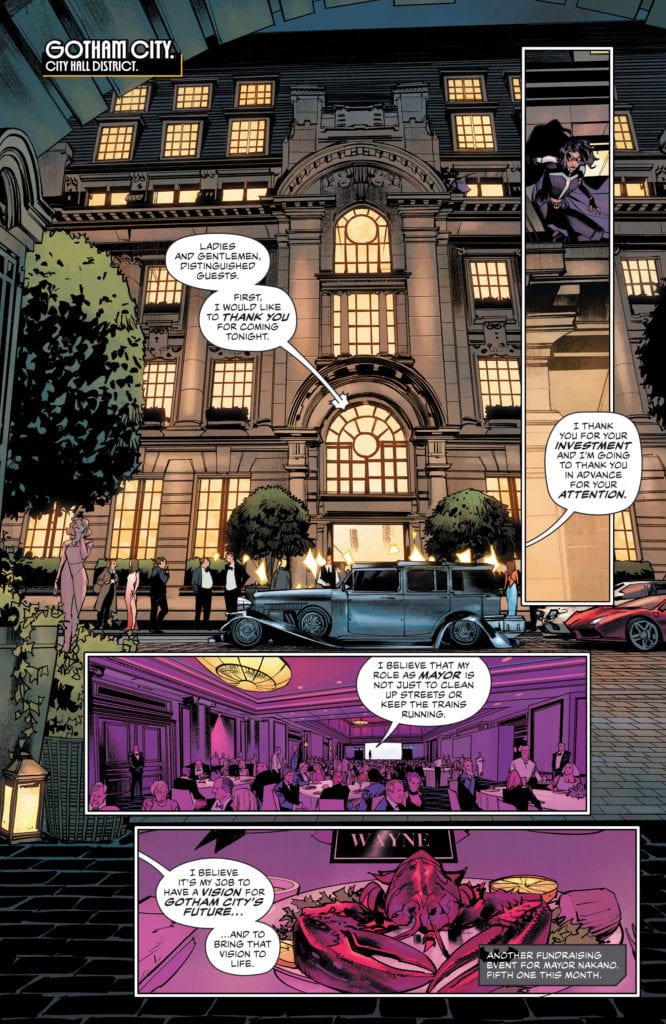 Mora helps us to see through Bruce’s eyes. Through page layouts, he shows us how Batman experiences life. On one page, Bruce subdues a bunch of goons. The whole fight is done in a single double page spread. But it feels even faster than that. In the center, we see Batman bursting in. Above this image, in small overlapping panels, we see everything Bruce took note of before entering the room. And at the bottom of the page, we get a similar bunch of panels of each goon getting put down. It all goes by so fast, but Mora highlights each important detail. It’s a brilliant visual representation of just how fast Batman’s brain works.

Bellaire does a fantastic job of making Bruce seem out of place. When we first see Bruce, he’s at a fundraiser that gets attacked. The moment that the attackers hit the lights, every other character fades into the background. But Bruce looks bright against the dark background. These are the moments that he lives for. Not long after, we see Bruce attending a neighborhood party. This time, the opposite happens. We see the bright faces of everyone around him. They seem happy and full of life. Bruce is in the foreground with the light not reaching his face. He looks dark and grim compared to everyone else. In each scene, we see how Bruce is different. He lights up at the sight of danger, while everyone else cowers, and slinks away when things get sociable, while everyone else is having a jolly old time. 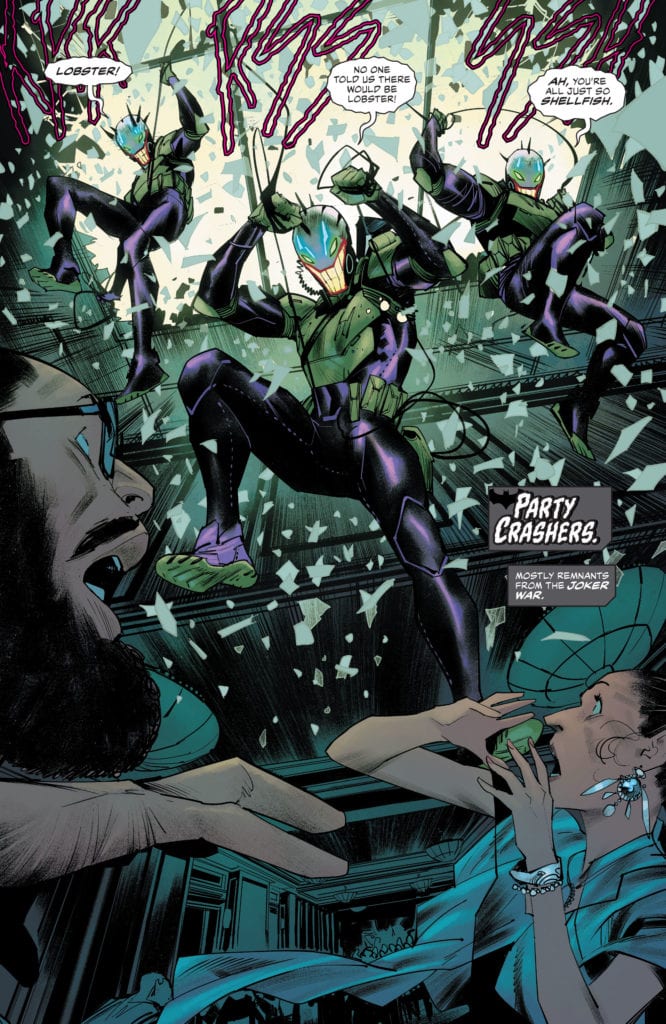 Bidikar’s letters are always a joy to read. But this issue has some truly exceptional moments. As the party crashers are taking charge of the room, Bidikar writes a big “BOOM” over one of their heads. The crook looks off panel. “Crap,” he says. He spotted Batman. But the “crap” is written perfectly. In a large word balloon, it’s written in a tiny, grey font at the center. You can just hear the goon, almost too scared to speak.

The following “KRAK” and “WHACK,” the results of Bruce’s fists, show us just what this guy had to be scared about. And later, as Bruce is working on a new headquarters, he stretches out and we can see a small “KRIK.” Bidikar uses the same font as the “KRAK” of Bruce punching a goon. It’s such a fun way to tie those two moments together. Bidikar is telling us exactly why Bruce’s back is killing him.

DC Comics’ Detective Comics #1034 is a wild read. It almost doesn’t feel like a Batman comic. But that’s because this creative team isn’t trying to fit a mold. They’re doing their own thing and infusing this action packed series with lots of humanity. Pick up Detective Comics #1034, out from DC Comics March 23rd, at a comic shop near you!

DC Comics' DETECTIVE COMICS #1034 is a wild read. It almost doesn't feel like a Batman comic. But that's because this creative team isn't trying to fit a mold. They're doing their own thing and infusing this action packed series with lots of humanity.Review: DETECTIVE COMICS #1034: Who's this "Bruce Wayne" Guy?