Review: A Mystery at the Orphanage in DETECTIVE COMICS #1017

Detective Comics #1017, out this week from DC Comics, follows on the heels of our last issue, which closed out Mr. Freeze’s Year of the Villain arc. The book—a standalone story from writer Tom Taylor—offers an interesting and engaging change of pace.

When children begin to disappear from an orphanage funded with support from Wayne Enterprises, our protagonist decides to take action. In this case, though, he finds that Bruce Wayne—not Batman—may be the best persona to investigate the disappearances. 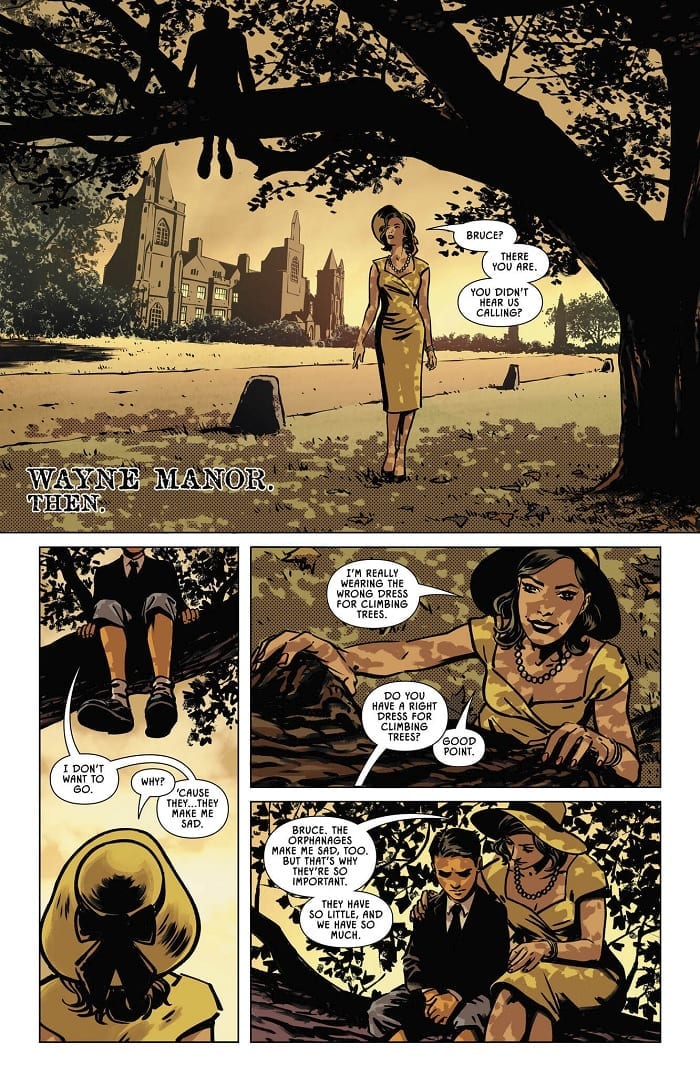 Taylor offers up a quieter, standalone story here. Like the book’s namesake, it’s more of a genuine detective caper than an action story.

We’re well-aware of the impact Batman has on his hometown. In Detective Comics #1017, though, Taylor seeks focuses on Bruce Wayne’s capacity to impact the city of Gotham, even when he’s not wearing the mask. It’s a facet of the character that often goes overlooked in favor of the super-heroics, but one that’s well-worth exploring.

It’s a novel approach to the character, and one that we wish we could see more often, to be honest. Delving into Bruce Wayne’s role as Gotham’s foremost philanthropist could spark an interesting conversation, especially at a time when the philanthropy of real-life billionaires is under greater scrutiny. Compounding the political relevance is the backstory for one of the children, who only ended up in the orphanage after being separated from his parents at the border.

While Detective Comics #1017 is compelling in isolation, the ending is a bit of a disappointment in some regards. After uncovering the mystery of the children’s disappearances, Bruce pledges to locate the missing orphans. We don’t get to see this happen, though; the book’s end is largely exposition, summarizing the climax in a brief montage.

While this could set up an interesting and emotionally-powerful, multi-chapter story arc, it ends up leaving the action to be carried out off-page. As a standalone story, though, it’s unlikely to be followed-up on, which is a shame, as it would offer a compelling and interesting exploration of Bruce’s role in Gotham beyond the shadow of The Bat. 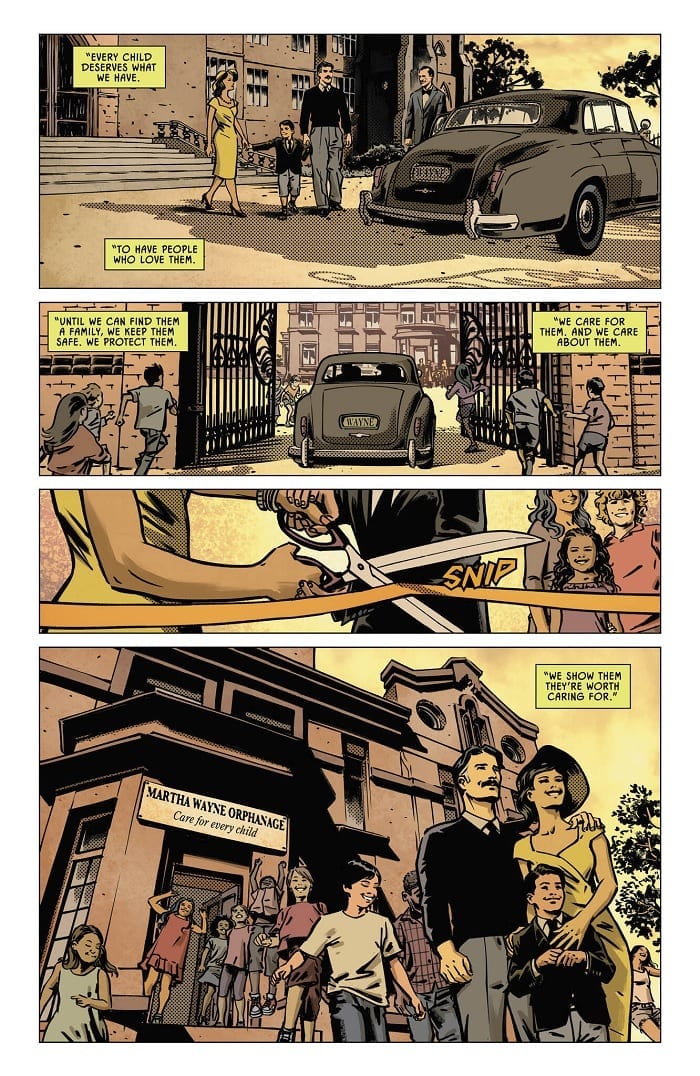 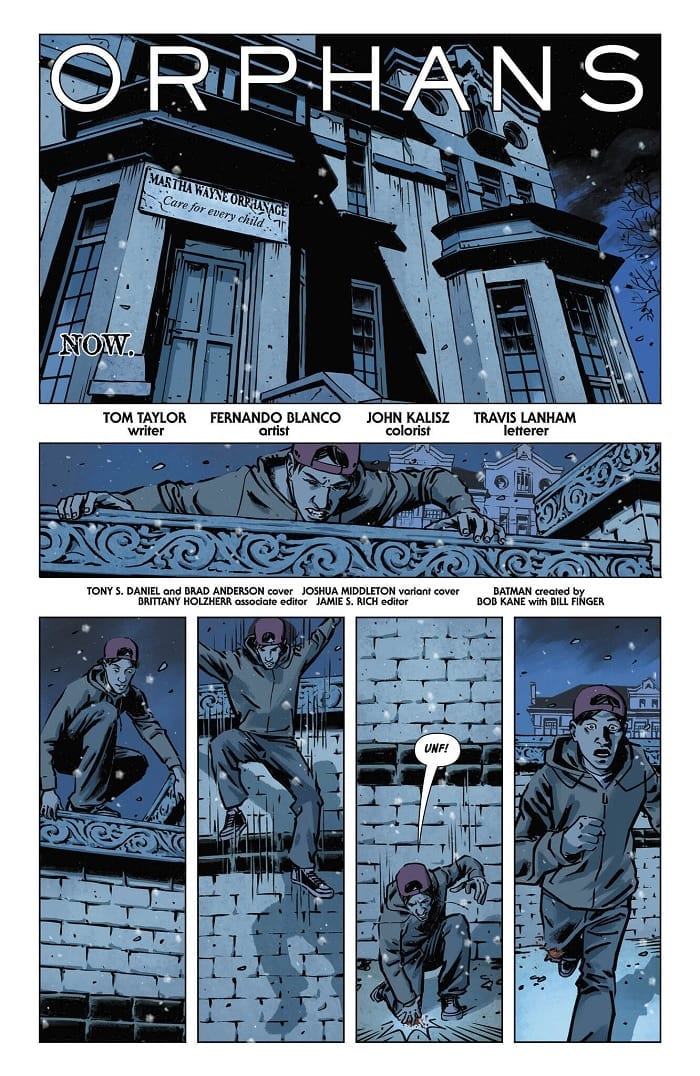 Artist Fernando Blanco brings a unique style to Detective Comics #1017. The book straddles the line between cartoonish and serious in terms of style; characters are expressive and lively, while retaining a sense of grit.

The creative team explores some interesting and varied layouts throughout the book. One page may be divided into evenly-spaced horizontal strips, while the next could be split into four quadrants. There’s a sense of internal consistency to the individual pages, though, along with a reliance on repeated visual motifs. This prevents the illustrations in Detective Comics #1017 from feeling unfocused or random.

Blanco doesn’t shy away from delivering the details in his work, either. His illustrations serve to fully-engage readers in the story. While it’s not overly-meticulous, the level of detail here hits the sweet spot.

Color artist John Kalisz’s work is not exceptionally eye-catching. It is, however, skilled and well-detailed. The artist takes a meat-and-potatoes approach, but it works for the effect that the book is trying to achieve. 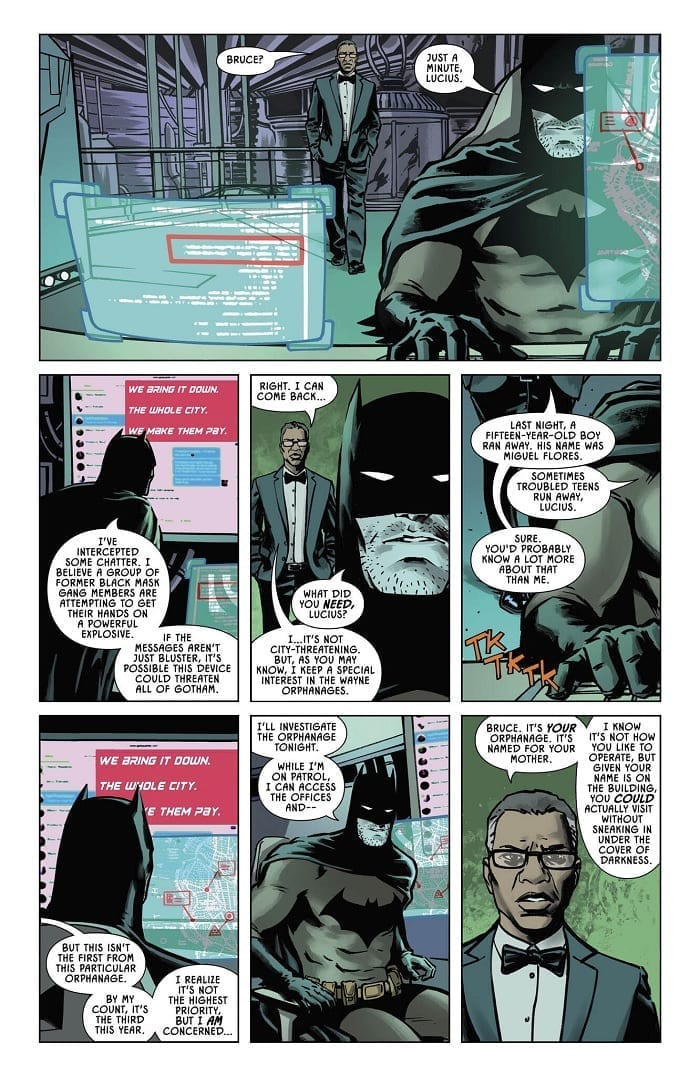 Detective Comics #1017 is a solid little self-contained tale. Although it could have used more space to tell this story, it’s a great exploration of Bruce’s character outside the cape and cowl.