Nora continues to act out her plan in Detective Comics #1016, out this week from DC Comics. What exactly she intends to do, though, is not entirely clear until the book’s finale. Meanwhile, Batman forms an uneasy alliance with Mr. Freeze, hoping they can stop Nora’s crime spree before she causes any major damage. 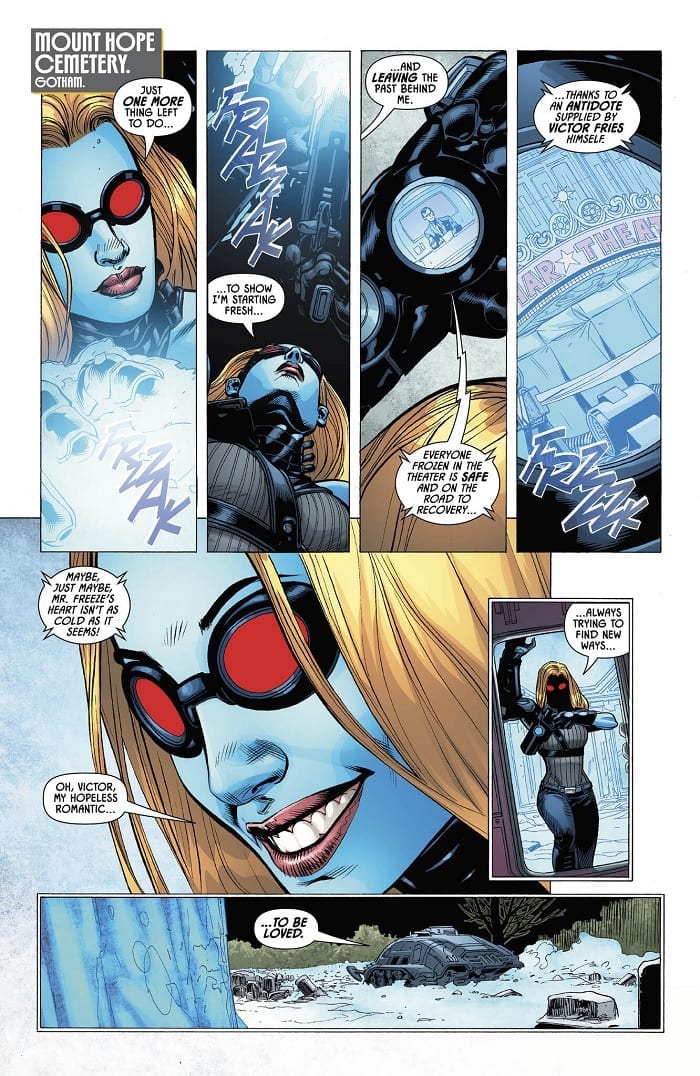 The book begins with a callback to an earlier story arc. Freeze explains that the serum used to revive Nora was used by Luthor as part of his research on Subject B-0 (say it fast if you don’t get the name at first). This gives a thin, but reasonable explanation for Nora’s sudden personality change. The book’s real strength, though, lies in the interpersonal emotional stakes between the characters.

The dialogue in Detective Comics #1016 is crisp and well-written. Writer Peter J. Tomasi conveys the emotional weight of the situation, yet avoids treading into melodrama. The work builds genuine pathos, delivering a well-written conclusion to this arc.

One might have assumed that this story would be wrapped up with a return to the status quo by the arc’s end. However, the ending provides a surprising, yet satisfying finale. The situational irony of the book’s twist is counterbalanced by genuinely effective and tragic storytelling. While other authors have given us a closer look at the flawed figure of Victor Fries, Detective Comics #1016 may stand as the definition of the character’s tragic arc.

One could complain about the relatively flat nature of Nora’s character here. Her motivation is a little muddled, and beyond her love of ballet, we don’t really get much of a sense of her character. There is, however, some dimension to be found in her desire to break free of Victor’s control.

Overall, Detective Comics #1016 proves to be one of the strongest chapters yet in Tomasi’s run on the book. 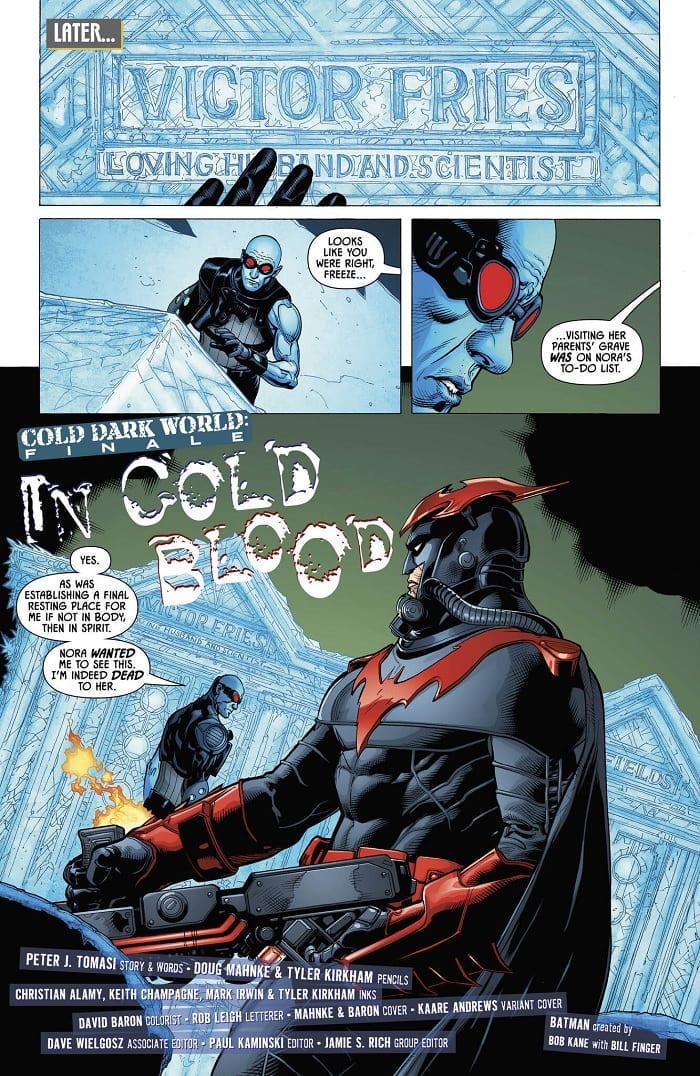 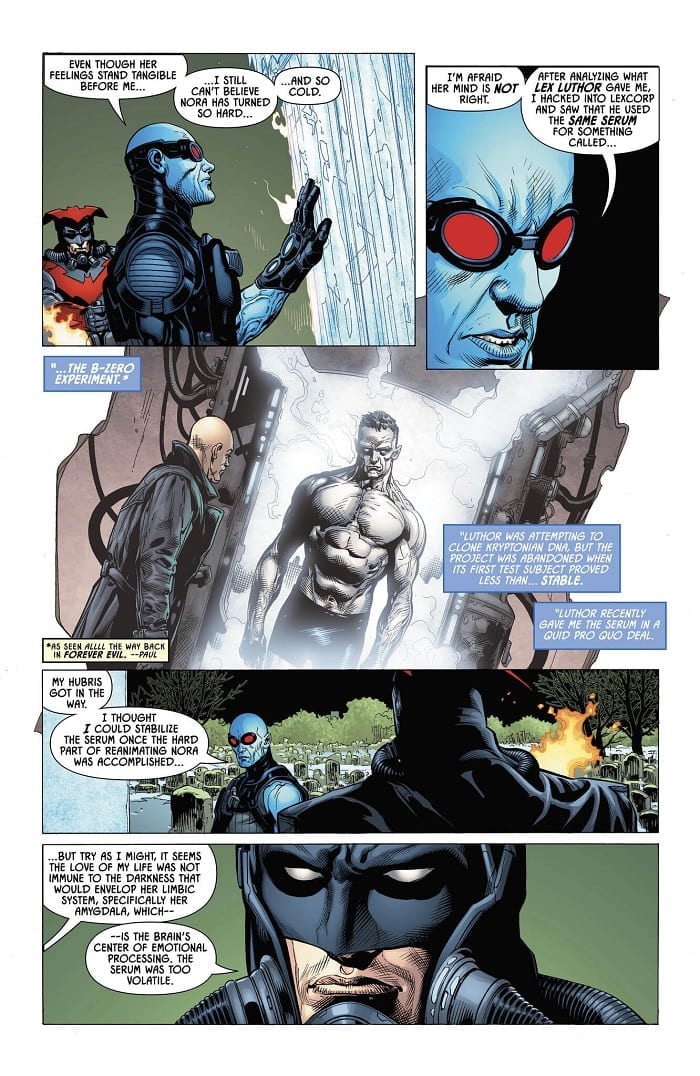 Artists Doug Mahnke and Tyler Kirkham offer impressive illustrations on Detective Comics #1016. The pages are consistently energetic, maintaining the reader’s attention and accentuating the tension in the storytelling. Panels provide some interesting work that is dynamic, yet cohesive.

The book’s layout nicely compliments the storytelling as well. We begin with more evenly-spaced, regular panels, but these dissolve to more uneven, jagged lines as the book progresses. This serves to underscore the action, enhancing the overall feel of the work.

Of course, the artwork in Detective Comics #1016 is not perfect throughout. For instance, the illustrations don’t always hit every story beat perfectly; there are times when the characters’ dialogue could work better if in a different layout. This is more of a nitpick, though, as overall, it’s excellent visual storytelling.

Colorist David Baron brings more of those brilliant, icy blues to the table for the story’s climax. The blue really cut through most of the pages, capturing the reader’s eye. He contrasts these with other vibrant tones, though, ensuring one’s attention is always focused in the right spot from one panel to the next. 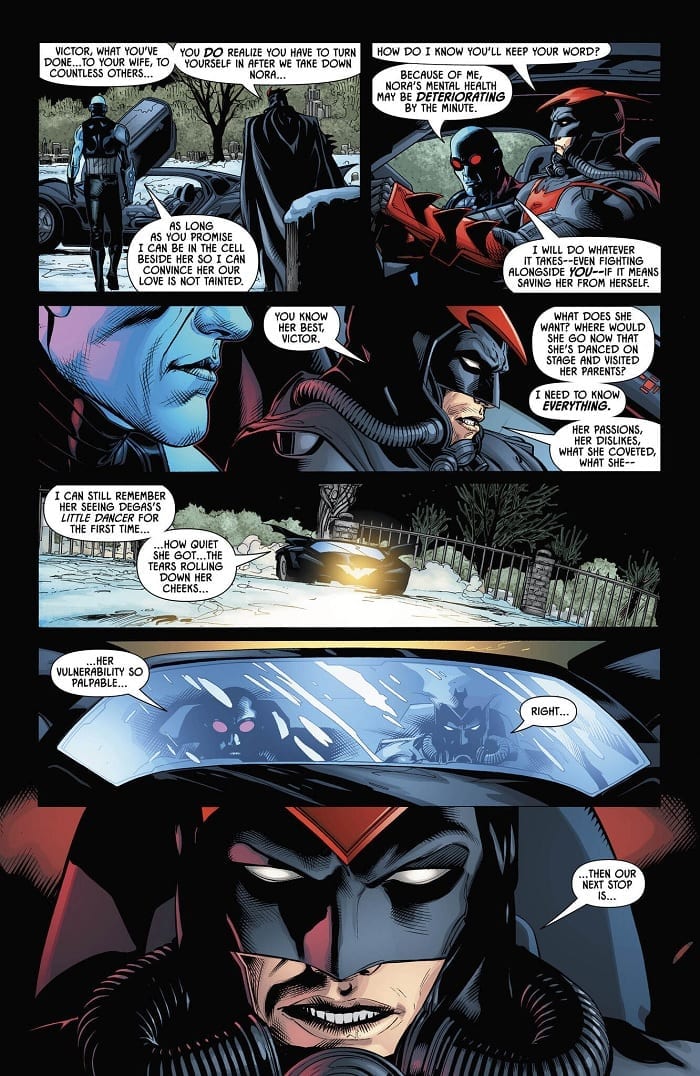 Detective Comics #1016 offers a great conclusion to an, overall, above-average story. Given the strength of the finale, I’d say the entire run is worth grabbing if you’re not already following with each issue.