Review: DARK BLOOD #1 – A Hero In A Thankless Home

Writer Latoya Morgan and artist Walt Barna have put together a phenomenal debut issue with Dark Blood #1. Along with colorist A.H.G. and letters from Andworld Design, this poignant and original comic blends real world socio-political issues into a superhero plot in a way the Big 2 often have trouble doing. With a brilliantly smart script and fantastic visuals, this is easily one of the best #1’s of the year.

“What if you were given the power to change the course of history? Alabama, 1955. Avery Aldridge is an ordinary young Black man. A decorated World War II veteran, Avery provides for his wife and daughter. But wounds of the past have a way of coming back, and Avery Aldridge will soon discover he is anything but ordinary… After a run-in awakens strange new abilities, Avery’s about to become more powerful than he could have ever dared to dream… in a country and society that never wanted him to have any power.” 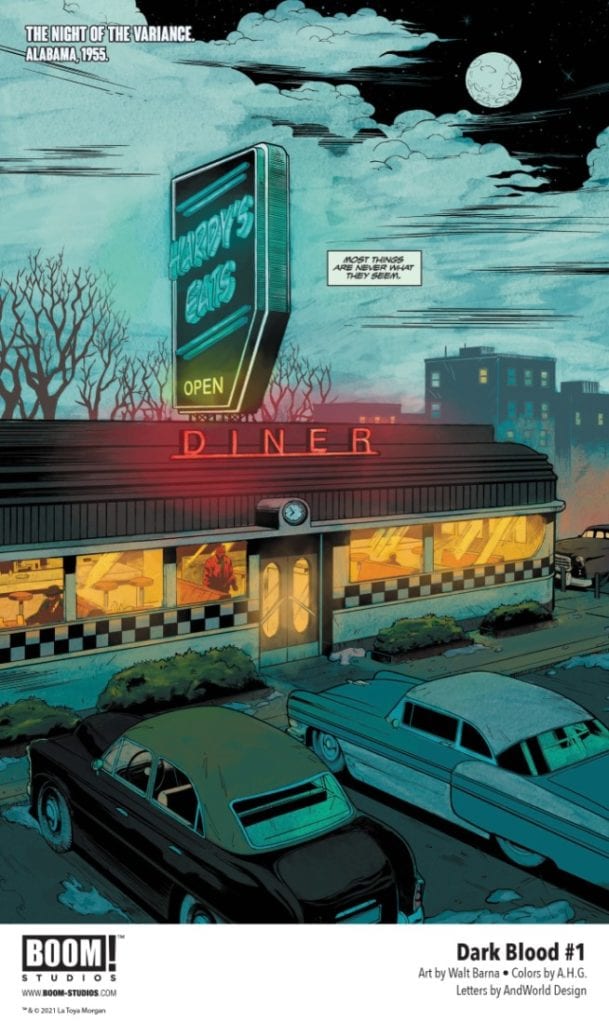 Latoya Morgan pens a script that blends a harrowing reality with a House of Ideas style origin story in Dark Blood #1. Avery Aldridge’s life after returning home is a discomforting reminder of a harsh truth – as it well should be. Morgan utilizes the medium to dart between flashbacks of Aldridge as a WWII pilot and his life back home as a black man in the Jim Crow South. Dark Blood is a gripping comic, with cutting dialogue and intense pacing. Morgan understands how to use the comics medium well to tell this story. There isn’t that much dialogue. Morgan writes the script to allow it to be told with sharp panel direction. Morgan’s experience as a screenwriter no doubt comes into play here.

A worry I had coming in was that the superhero comic-ish element of this book would stick out like a sore thumb and not fit into the book. Fortunately, Morgan sticks the landing here as well. The moment where we witness Aldridge’s powers manifest for the first time is a damned satisfying thrill. The buildup and unexpected unleashing of this power given the context of the scene here made my hair stand on end. This is a textbook lesson in how to write a great opening comic, with a tight and exciting script that makes me endlessly excited for what comes next. 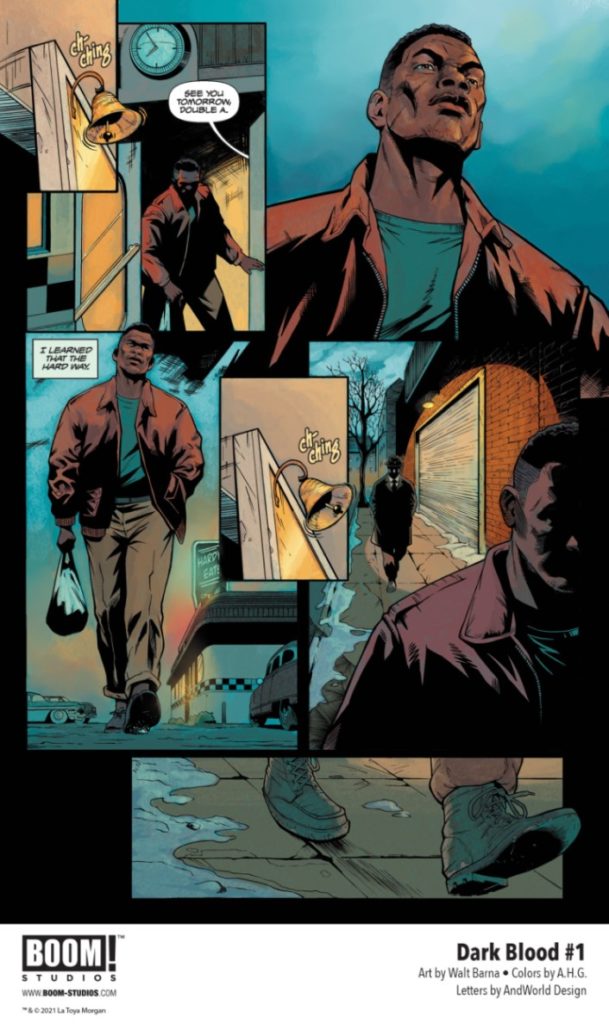 Walt Barna elevates an already astounding script to immense heights in Dark Blood #1. His pencils and inks provide a that makes the reader get lost in this comic’s pages. Barna’s thin lines are filled by sharp, shadowy inks. This pays in dividends with the comic’s dark, imposing “current” setting as well as its thematic subject. His Character animations are outstandingly detailed, giving us insight to Aldridge’s mentality and making it very easy to empathize with him. Action sequences are full of weight and momentum, making them pack an exhilarating punch when events stop being quiet. Panel direction here is expertly crafted as well. Barna excels at the sequential progression of tension, building to the intense payoffs with a careful hand.

The colors from A.H.G. are top notch as well. Every page is brought to life with a thick, vivid palette. This work intensifies the atmosphere of the book, capping off the outstanding visual work. The lettering here is intuitive and modern, with sensible font changes and great special effects work. This is an outstanding looking comic, befitting the excellence of the story being told. 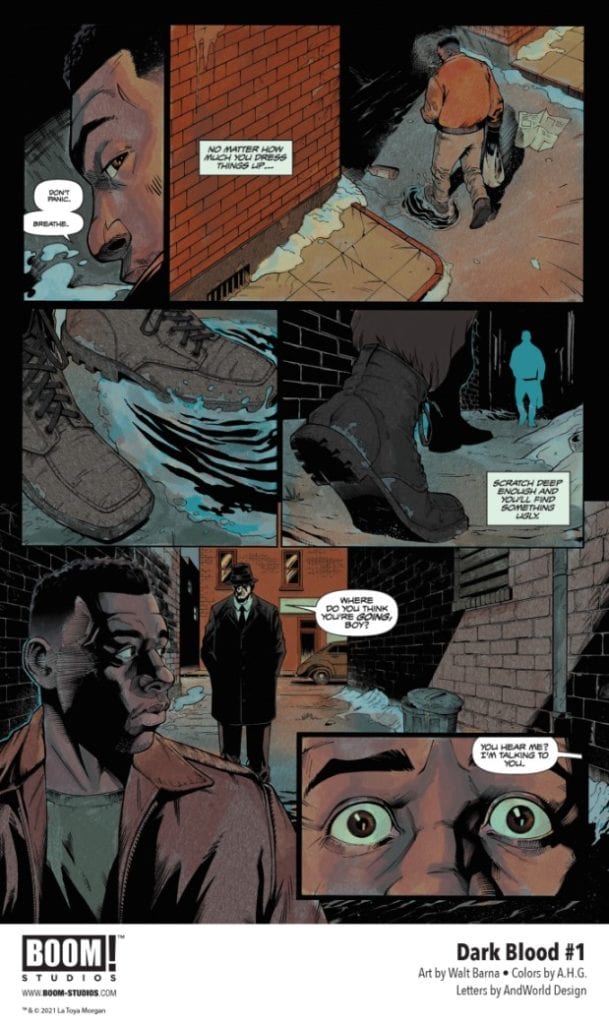 Dark Blood #1 is a phenomenal opening issue for this mini-series. Latoya Morgan’s script is poignant and calculated, and crafts a unique script packed with narrative power. Walt Barna and A.H.G.’s visuals are stunning and atmospheric, packed with detail and great direction. This is a prime example of a great #1, so be sure to grab it when it hits shelves on 7/21!

An intense and necessarily uncomfortable read, Dark Blood starts off strong with a brilliant premise , knife-sharp writing and staggering visual work, all of which work together to create one of the best debut issues of the year.Review: DARK BLOOD #1 - A Hero In A Thankless Home