Review: On the Road of Vengeance in the Old Deep South with KILL WHITEY DONOVAN #1

Novelist and first time comic writer Sydney Duncan and artist Natalie Barahona ally with 12-Gauge Comics and Dark Horse to bring us the first issue of “Kill Whitey Donovan.” This revenge soaked story starring two women during the Civil War era is off to a strong start, with a dense but still sharp script and gritty atmospheric visuals.

After Anna Hoyt’s sister commits suicide, she sets out across the deep south in search of the man who destroyed her family; Jim “Whitey” Donovan, her fiance. She’s gonna need help though, and that help comes from one Hattie Virgil, a slave to the Donovan family who has just as much reason to kill Whitey as Anna – if not more so. The two set out with the aim to lay their vengeance upon Whitey. But the deep south in the 1860’s is a cruel place, and the pair will need to dodge even more obstacles – including the slave hunter on their tail – to reach their goal. 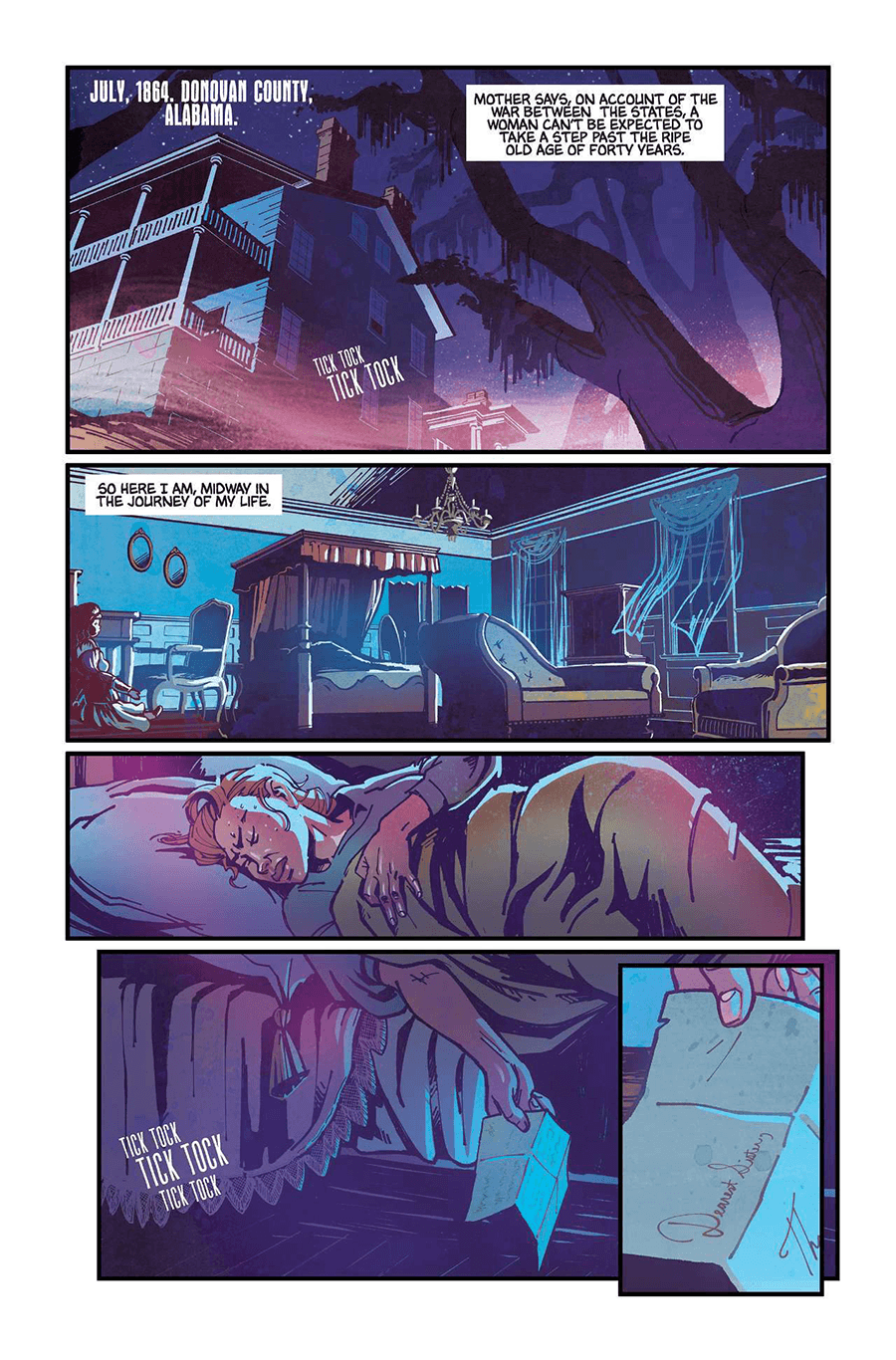 Writer Sydney Duncan‘s experience as a novelist becomes readily apparent upon reading the first page of “Kill Whitey Donovan.” Her overarching narration throughout the novel gives the reader a window into Anna’s internal turmoil that fuels her need for vengeance. There’s a clever use of first person limited as well, meaning that the reader is given full insight into Anna’s thoughts, but no one else’s. This maintains a continual sense of tension and suspense as the story goes as well as with other character interactions. This novelist approach to writing a comic is admittedly a little dense to read, especially as the eyes wander from small paragraphs of narration back to imagery. However, the script itself is purpose-built for tension and immersion. The varied dialogue and steady thriller-like pacing of this issue is superb. Duncan sells the time time period not just through situational context, but by how the characters use their dialogue and how each one fills a purpose in this sort of environment. There are short flashback moments as well with just enough backstory to give insight to Anna and Hattie’s rather tenuous relationship (the latter is a slave in the deep south after all), but leave enough mystery to have us wanting more. From compelling lines of narration and dialogue to a perfectly paced script, Duncan does a great job on this first issue. 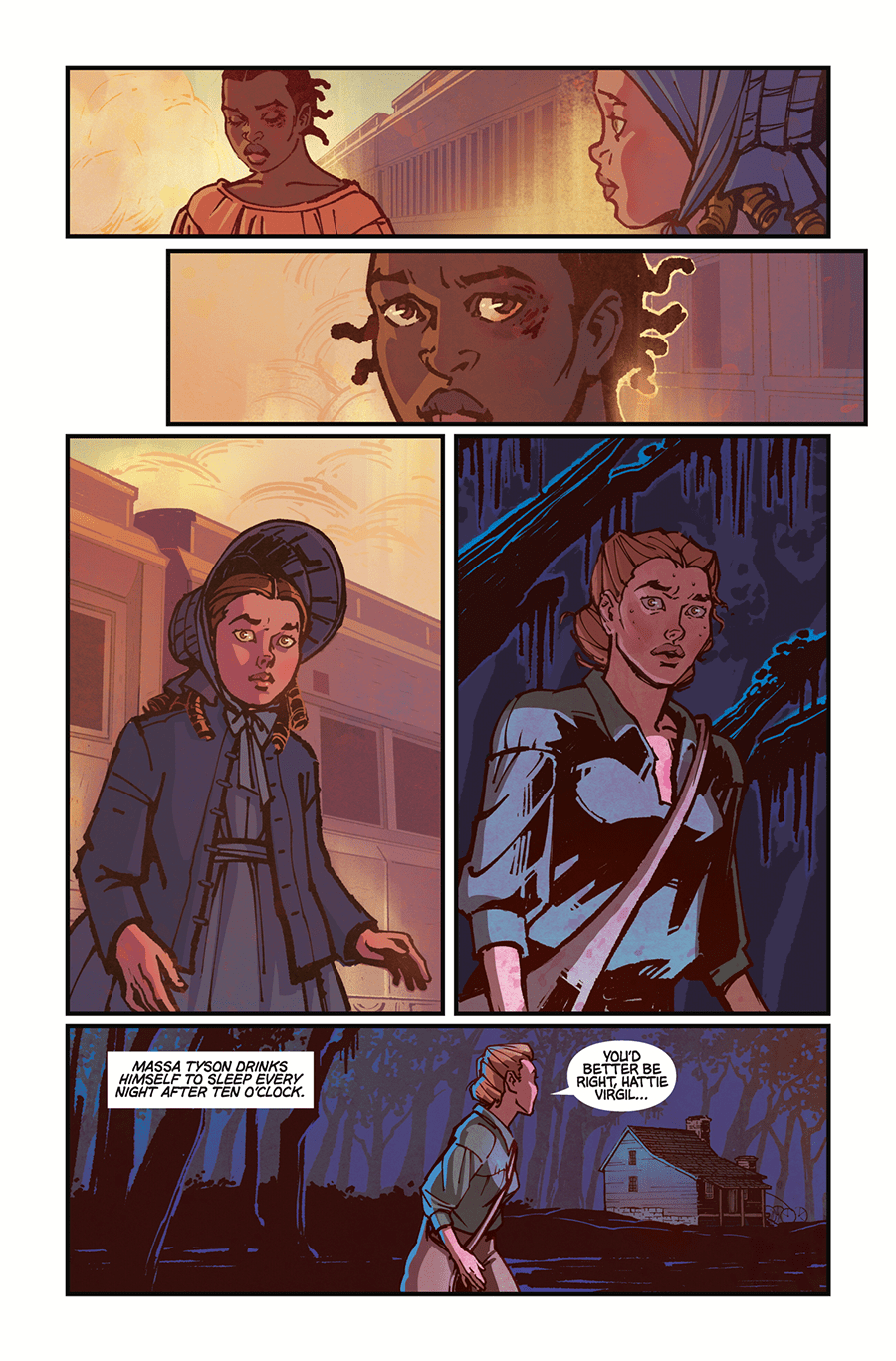 The tension and atmosphere put forth by the script is brought to life by Natalie Barahona‘s unique vision with her artwork. The look of Alabama in 1864 as done by Barahona is dusty, sweaty and filled with shadow. As such it perfectly encapsulates the overall tone of the issue. The urgency Duncan writes in the script is realized by Barahona in quiet hushed moments fear and anxiety across character’s faces. Chase sequences explode to life with frantic kinetic energy and desperation. The character detail is fantastic, with all ranges of emotion looking different to each character. The use of heavy shadows in this first issue gives it the appearance of a thriller or horror story, and makes the desperation of the two lead characters that much more felt by the reader. There is a definite digital sheen that comes with Barahona’s technique that may turn some more classically-minded readers away. If so it’s a shame, because the artwork here is truly stellar for the sort of comic this is. 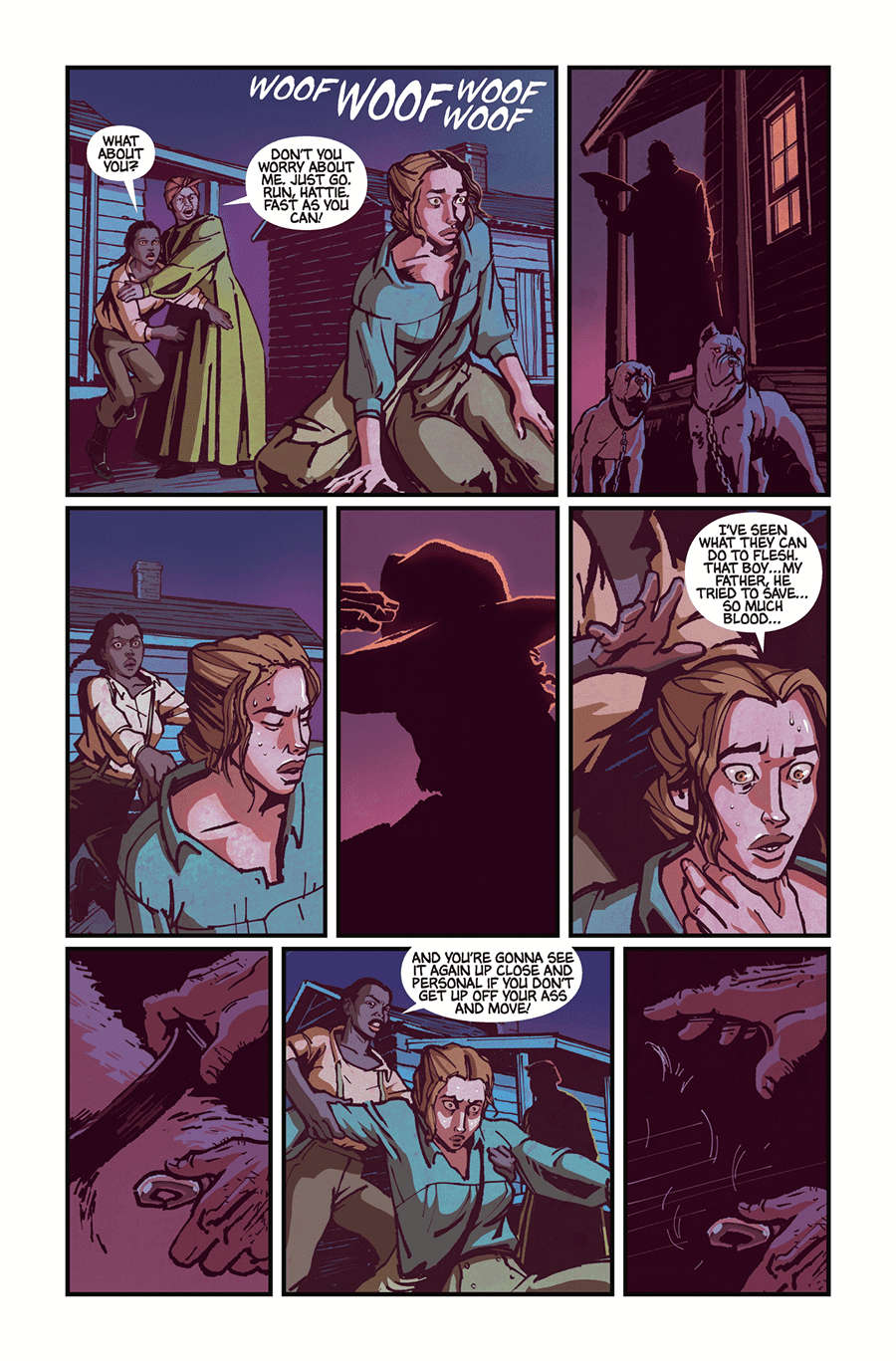 “Kill Whitey Donovan” #1 is a compelling and tension filled start to a unique sort of historical fiction revenge quest. The mysterious build-up of backstory for both Anna and Hattie as characters and their motivations to kill Donovan as well as a brutal cliffhanger make the wait for a second issue near painful. The creative duo of Sydney Duncan and Natalie Barahona are off to a great debut in what could be one of the most memorable comics of the year. Be sure to add this one to your pull list at your local comic shop.

A slightly dense but brilliantly atmospheric and hair-raisingly tense debut issue with one of the most promising story premises of the year. Review: On the Road of Vengeance in the Old Deep South with KILL WHITEY DONOVAN #1