DC Comics’ Rorschach #5 connects all the dots. But the picture we get isn’t much clearer. Writer Tom King, artist Jorge Fornes, colorist Dave Stewart and letterer Clayton Cowles open the floodgates of information in this thrilling mystery, but with every answer we have more questions.

King isn’t one to exposition dump. So, when he does flood a panel with information, it’s worth taking note. In the first moments of Rorschach #5, King essentially gives us a run through of everything we know so far. Characters sit at a bar and try and make connections. But the Rorschach and The Kid characters, that our detective has been chasing, remain just as untouchable and mysterious as ever. On top of that, King brings in more complicating factors. We meet Turley. Turley is meant to be the people’s man. Rorschach and the Kid were violent insurrectionists trying to kill a man so they could hold onto their outdated values, right? Yet Turley doesn’t seem like any kind of hero. His nonchalance about violence and fetishization of The Comedian make him a character to worry about. And our protagonist certainly seems as disturbed as we are. 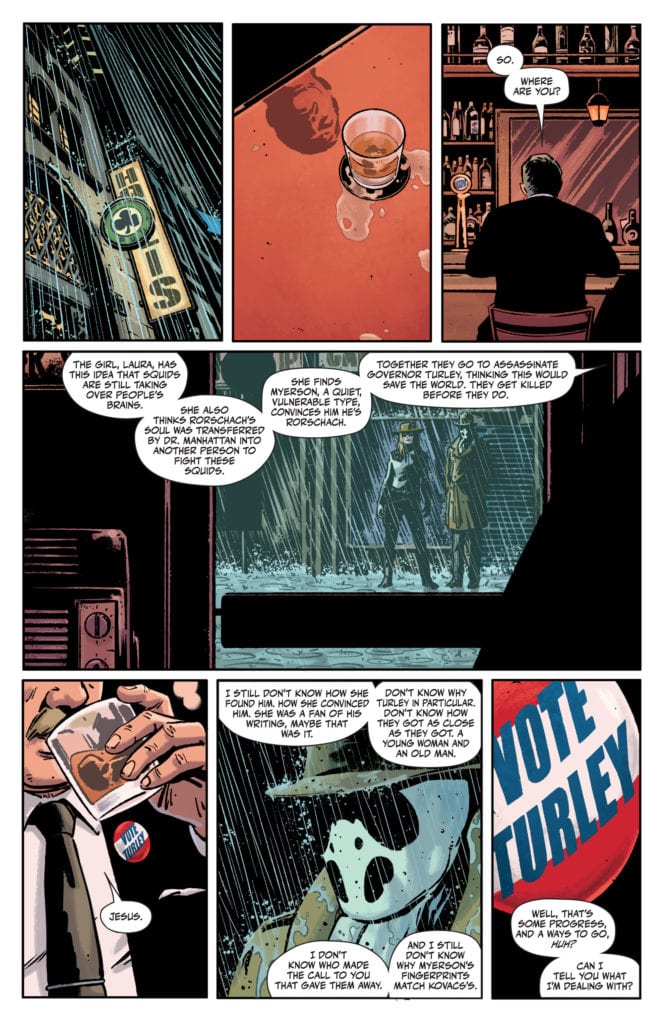 Fornes highlights the absolute indifference all these characters have to what’s going on around them. One character is shown gunning down Rorschach and the Kid. His face doesn’t move as Rorschach screams over Laura’s dead body. He simply reloads his gun and unloads another clip. Our protagonist’s face never changes either. Whether he’s being asked to see Turley, watching a man take a dump, or listening to stories of murder and mayhem, he’s unmoved. Turley seems quite similar. Fornes first shows him, speaking with a crowd of smiling people behind him. He looks somber and serious. It’s not until he tells the detective about his time in the Vietnam War that we see the big difference between the two of them. Turley speaks fondly about his kills during the war and laughs at the thought of all that death. It’s the one time we see him smile, and we’re left wishing he wouldn’t.

A lot of this issue is rather somber looking. Stewart uses faded colors to depict a rainy day. But Turley’s button and tie are bright. The reds and blues look artificial compared to the dark colors around them. The bright blue suit of one of Turley’s men only serves to make him look like he’s out of touch with the world around him. These painted-on colors don’t speak to us of patriotism. They speak of a sickly sweet façade. The only other moments that Stewart uses bright coloring are moments of extreme violence. The gunning down of Rorschach and the blood pooling around a Vietnamese man’s head are shown in brilliant red. It’s as though Stewart is saying that that’s what is truly American. To pull the trigger without flinching. To look into the abyss, convincing yourself that it isn’t looking back. Cowles makes every line that someone speaks look full of the weight of responsibility. When Turley speaks, his lines are rarely shown over his head. His words are over the heads of others. It’s like some kind of power play. His dialogue has a presence in the room, and that presence is heavy over whoever he wants to push around. One of his security guards is similar. He speaks to the detective and every word balloon is pictured over the detective’s head. It’s as though he’s saying “This is my house, I’m watching you.” But the liaison between our detective and Turley is different. When he speaks, bringing messages back and forth between Turley and our protagonist, his words surround him. He’s trapped in his responsibilities and he feels the weight of Turley’s power, even when Turley isn’t in the room.

DC Comics Rorschach #5 reminds us of what we know so far. The answer? Not much. This creative team continues to drench each chapter in mystery. With every answer, there are a hundred new questions. Pick up this neo-noir thriller, out from DC Comics February 9th, at a comic shop near you!

DC Comics RORSCHACH #5 reminds us of what we know so far. The answer? Not much. This creative team continues to drench each chapter in mystery. With every answer, there are a hundred new questions.Review: Comedy and Casual Violence in RORSCHACH #5