You gotta love a good fantasy saga like Coddlesworth’s Clockwork Circus, hitting Kickstarter February 2nd. I’m talking about one of those meaty, sprawling epics that takes its time to delve into background and mythology. A slow burn that takes up as much real estate (if not more) for worldbuilding as it does for character development. That’s what you get in the first issue of this fantasy steampunk adventure – a solid setup for what is sure to be a grand story.

Coddlesworth’s Clockwork Circus, written by Danny Oliver, with pencils/ink by Slobodan Jovanovich, and colors by Kurt Michael Russell, is funding its first issue on Kickstarter from February 2nd through March 4th 2021.

A flood of magic rushes into a steampunk world and two halflings with sorcerous powers join an eclectic troupe of circus performers in order to save the planet from destruction. The first issue sees the arrival of our halfling protagonists in a busy port city before meeting the first members of the troupe. 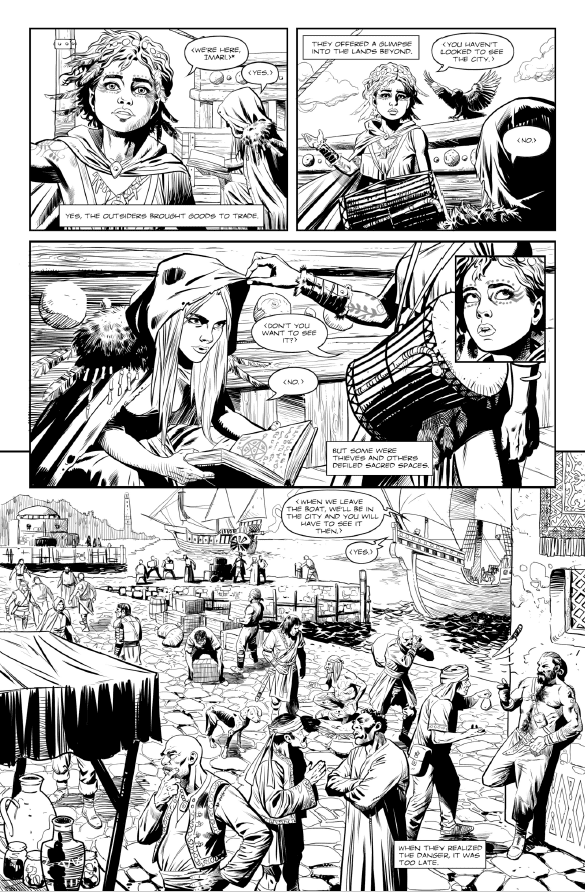 Writer Danny Oliver’s first words really help to set the tone in Coddlesworth’s Clockwork Circus. He starts the story with that classic narration in the vein of Galadriel at the beginning of The Lord of the Rings. It’s ominous and otherworldly, and even poetic. The reader gets a good setup to the story and characters. The writing helps transport you to this strange, new world of fantasy and magic.

By the end of the issue, we don’t know too much about the protagonists, nor their intentions. But it is definitely enough to keep you intrigued and wanting to read the next issue. This first issue has clearly only scratched the surface of the world and story. Oliver is building something big and interesting here, and you should be on board for it.

Artist Slobodan Jovanovich’s line work in Coddlesworth’s Clockwork Circus can be described as highly meticulous. The shipping pier has so much detail, from the cobblestone path to the people walking atop it. You can almost hear the waves crashing and the chatter amongst the patrons. And it goes on from there, as the protagonists make their way through the city, you will find more line work detail to admire.

Colorist Kurt Michael Russell offers a vibrant, warm palette that compliments the ink and pencils. The yellow-tinted backdrop makes the colors in the forefront – such as the clothing – pop tremendously.

An admirable setup to a seemingly interesting concept, packed with compelling narration and artwork that displays a great attention to detail, Coddlesworth’s Clockwork Circus is perfect for those who love to be transported to fantastical lands and epic storylines.

Do you have a book on Kickstarter like Coddlesworth’s Clockwork Circus or Unicorn: Vampire Hunter that you would like reviewed/promoted? Send an email to info@monkeysfightingrobots.com!

An admirable setup to a seemingly interesting concept, packed with compelling narration and artwork that displays a great attention to detail, Coddlesworth’s Clockwork Circus is perfect for those who love to be transported to fantastical lands and epic storylines.Review: CODDLESWORTH'S CLOCKWORK CIRCUS #1 Sets Up A Fantasy Adventure