Review: BLOOD STAINED TEETH #1 – Getting Some Of That Vampire Money

From writer Christian Ward (Machine Gun Wizards, artist on Invisible Kingdom) and artist Patric Reynolds (Hellboy & The B.P.R.D., Joe Golem) comes a ridiculously stylish blood & fangs comic made for the internet-capitalism age with Blood Stained Teeth #1. With colors by Heather Moore and lettering from Hassan Otsmane-Elhaou, this opening issue comes off as a bit scattered in terms of story, but makes up for it in pure flare. With a slightly dizzying but immediately entertaining script and dazzling art, this vampire comic will stick out in your mind and on the shelf for years to come.

“Atticus Sloane—misanthrope, criminal, asshole, and vampire—lives in a world where blood isn’t the only thing vamps crave. And for the right price, he’ll make you a vampire too. After all, immortality isn’t cheap.” 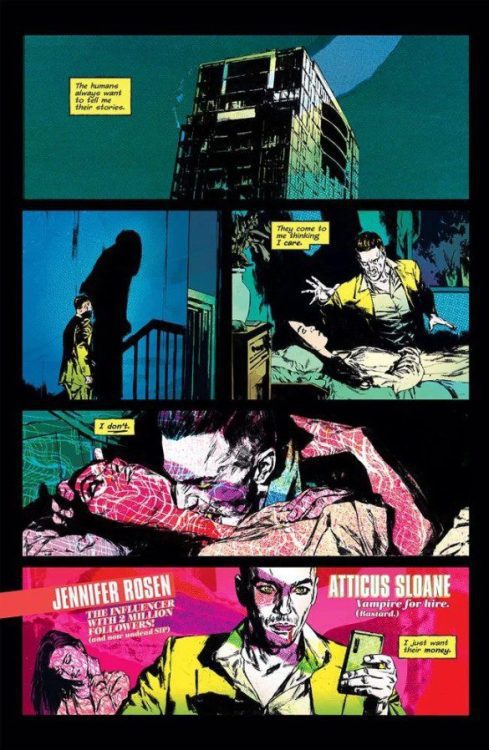 This all-nighter high roller party & fever dream of a script from Christian Ward really kicks off this vampire story with a bang in Blood Stained Teeth #1. Immediately we’re set upon by a sardonic, satirical narrative influenced by both a multitude of vampire tales and modern society. Ward pokes fun not just at internet culture, but a bit at how vampires are so loved by our generation despite them being monstrosities of old. Some of the satire points about influencers may be low hanging fruit, but the tone of the comic keeps it from coming off as annoying. Sloane endears himself as a lovable scummy bastard from the word “go.” His dismissive view of humanity, possession of a toadie cab driver (Hellblazer, anyone?), and sense of style all paint him as a guy you shouldn’t like but can’t help yourself. Ward setting him apart from the rest of the bloodsuckers by making him an honest SOB instead of a slimy one-percenter like the rest is one of this book’s great narrative decisions. This is the 2nd comic I’ve read this week where the ultra-rich were presented as vampiric A-Holes, and it’s a trope I’m all for. The bits of world building and lore Ward has laid down so far are intriguing, and I look forward to seeing how the rest of this world comes together. I won’t spoil anything, but there’s a particular inclusion of a real person in this comic that is hilariously brilliant, and will easily go down as one of the best uses of such a trick in a comic.

The only gripe I have with the writing here is how the plot is a bit too scattered for its own good. The scenes that we drift to from years past are well-crafted and engaging, but the where’s and why’s of them still come off as needlessly obfuscated. This could easily be the nature of this comic though. Regardless of this concern, the ideas and tone of this first issue have me very excited to see what Ward has planned next. 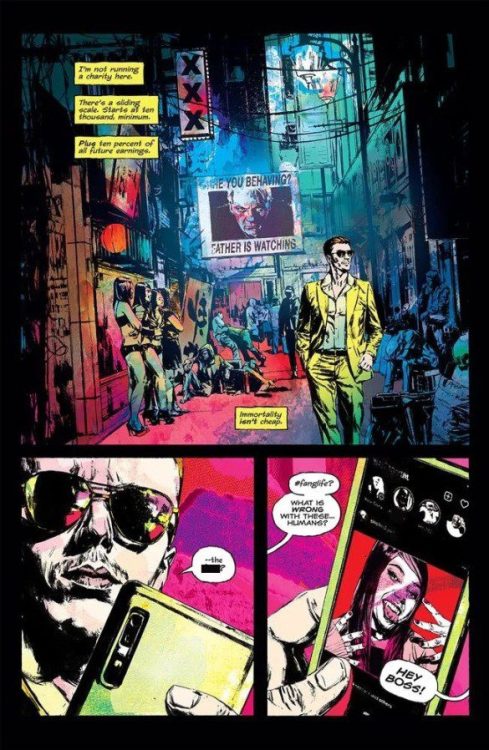 I knew this book was going to look good, but I was unprepared to be smacked in the face upon opening up Blood Stained Teeth #1. Patric Reynolds’ visual direction in this comic is stupidly impressive. His character animations are all super-stylish while also presenting realistic animations and details. The arrogant yet worn swagger of Atticus Sloane, the hapless contentment of his cabbie, and the sickening confidence of the “pure” vampires does all the storytelling for us in only a few panels. Reynolds’ facial drawings are absolutely stellar, with a lifelike detail rarely seen in the medium. Every panel is lit up with the intricacies of this comic’s world, with each page being packed with background details that draw the reader in even further. Reynolds captures what feels like every small microcosm of life that goes on around Atticus and other relevant characters, so it’s fortunate that his composition is so smooth yet creative to contain everything. Every page tends to utilize multiple panels that often crash into each other, which mimics the frantic style of the story bring told here. Reynolds uses that to accelerate the comic’s pace but still make events easy to follow. His works here really is staggeringly cool.

What ultimately makes this comic so striking is the coloring from Heather Moore. Her bright neon palette jumps at the reader as soon as you open the book. There’s an almost pop-art style effect at play here, with Moore’s hyperactive colors filling in Reynolds’s realistic penciling. However, Moore’s work is much more dynamic and creative then that impression might have you believe, and it truly is one of those works that has to be seen to understand. Finally, the lettering from Hassan Otsmane-Elhaou is tonally perfect and matches the reading experience to a T. There are sporadic details like sudden underlines and creative adjustments to the font that accentuate narrative and dialogue voice. I expect nothing less than greatness from Otsmane-Elhaou, and yet I’m still blown away. Visually, this entire comic is an absolute marvel. 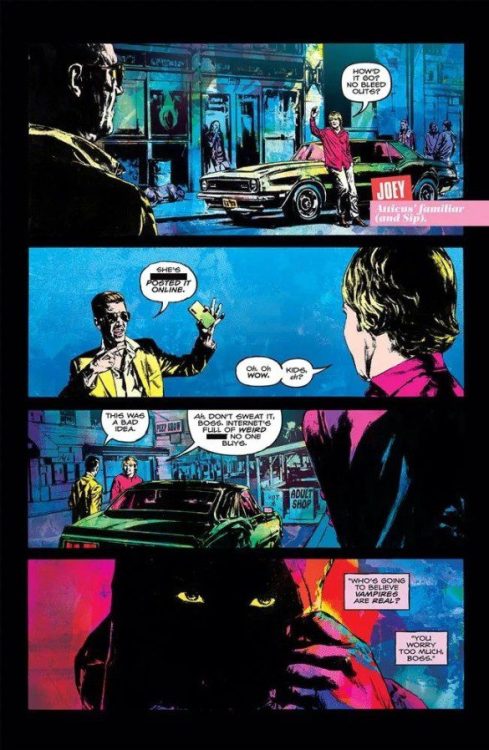 Blood Stained Teeth #1 is a fun and stupendously stylish first chapter in this new vampire series. Christian Ward’s script can feel a bit scattered at times, but his memorable characterizations and biting (haha) narrative make this an effortlessly enjoyable experience. The visuals from Patric Reynolds and Heather Moore are just stupidly impressive, with a style and swagger that has to be dove into to fully appreciate. Be sure to grab this fantastic first issue when it hits shelves on April 27th!

Despite being a bit scatter-brained, Blood Stained Teeth #1 has enough style to make it one of the most striking and clever vampire stories in recent memory. Review: BLOOD STAINED TEETH #1 - Getting Some Of That Vampire Money