Review: Battling With Grief In FAITHLESS #5

Brian Azzarello and Maria Llovet ask you to witness the fall and rise of an artist in Faithless #5, published by BOOM! Studios this week.

After the second, shocking, death of one of her friends, Faithless’ heroine becomes despondent, desperate to close herself off from the world. Fortunately, Mr Thorn will not allow that, mostly because the crying woman is making his sofa untidy.

The opening page is perfect example of Azzarello and Llovet’s commitment to character. Nine panels with no background focuses the reader’s attention directly on Mr Thorn as he talks, seemingly, directly to the audience. It is not until the final tier of the page do you realise that the conversation is two sided. Azzarello uses the speech to demonstrate the characters easily distracted train of thought while also implying the supernatural element of his life.

From this moment onwards the focus shifts to Faith herself as she moves through her grief. Each of her interactions allow a different stage of grief to be addressed and the facets of Faiths personality are explored. She is a contradictory, complex person and this is highlighted through her conversations, especially the park talk with Ginny. Her friend points out her double standards when it comes to Poppy and reluctantly Faith faces this.

Maria Llovet captures the reaction shots of Faith during these various conversations beautifully. The reader can see the denial followed by acceptance in Faiths body language alone. Llovet is able to draw the personalities out of the characters making them act in every single panel. Her figure work is so full of life and energy. The change in Faith between the start of this issue and the end is visible in the way Llovet draws her; she grows as a character before the reader’s eyes.

The panel layouts are fairly standard, with Llovet employing stacked panels that stretch the width of the page. She then breaks up one of these panels to draw attention to a particular action or sequence. This intensifies the moment; in one instance giving it a sense of almost uncontrollable desire and in another adding importance to a seemingly insignificant object.

Llovet’s art work is simply gorgeous and bursting with color. Each page is a melee of visual delights. She is able to represent the bustle of a children’s playground in an instant setting the scene which is then evident across the page. She is also able to use the background to lead the reader through the panels to accentuate the character’s actions. Llovet uses the entire page to tell the story so that the reader gets an indication from a simple glace what is happening. Then the reader is drawn into the page by the panel layouts and the lettering.

The lettering on the sound effects is playful and colourful. It has a hand-drawn style that perfectly matches the art work behind it. The lack of black outlines means that the sounds appear to emanate from the images rather than be separate from them. They blend in with the scenery and characters.

The speech balloons, by AndWorld Design, also have a hand-drawn aspect to them. The irregular shape of the balloons matches the style of the comic as a whole. A slight change in coloring helps to identify who is speaking in some of the scenes and well placed balloon tails link the speech to the character even if they are off panel. 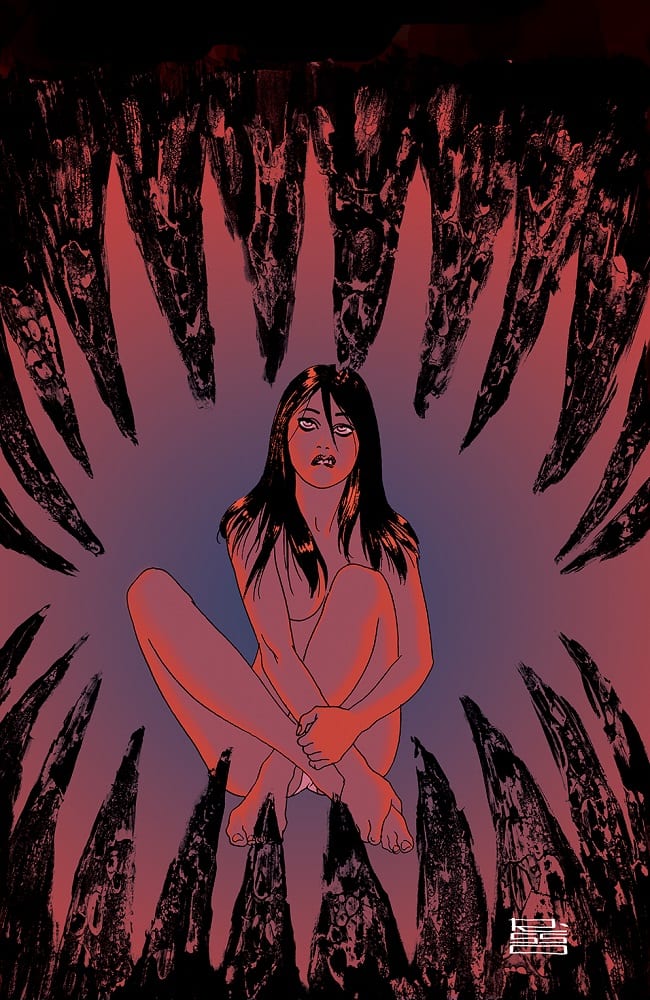 Faithless is a passionate work of Art. If you don’t get caught in the magical embrace of the narrative, it may be easy to get lost in the story or question the character motives. A number of the sequences require the reader to accept a certain care free abandonment of usual narrative structure. Elements from previous issues, like certain big plot points, are barely mentioned or even overlooked entirely in this issue. Azzarello and Llovet hope that you will put these to the back of your mind while you follow Faiths journey.

Faithless is a compelling comic with complex characters and adult content that isn’t just about uncensored sexual exploits. It demands a mature reader and rewards you for allowing the narrative to flow like an uncontrolled river rather than a structured canal. By this point in the series any reader should know what to expect and the creators do not let you down.

Darryll Robsonhttp://www.comiccutdown.com
Comic book reader, reviewer and critic. A student of Comics Studies and still patiently waiting for the day they announce 'Doctor Who on The Planet of the Apes'.

Faithless continues to impress with a witty script and strong, emotional art. The allure gets stronger with each issue.Review: Battling With Grief In FAITHLESS #5