We saw Bruce uncover the culprit behind a gruesome murder in our first issue. Now, with The Batman’s Grave #2, out this week from DC Comics, he has to survive the encounter…and avoid being taken out by a distrustful Gotham PD in the process. 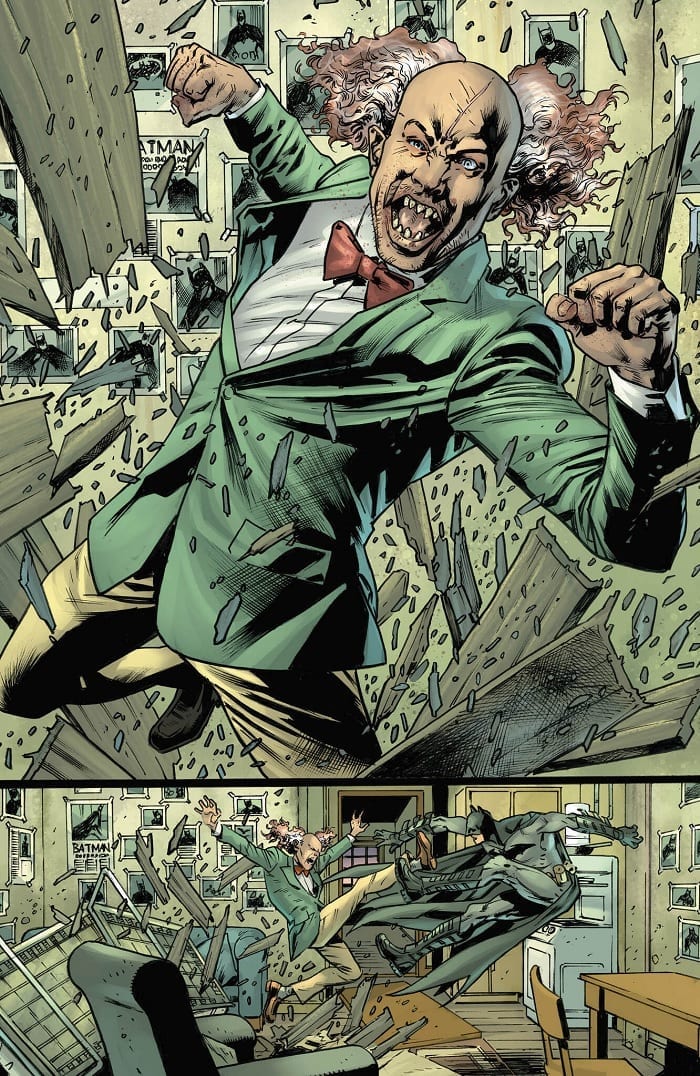 An extended fight sequence between Bruce and the murderer he discovered in our last issue occupies the book’s first half. Writer Warren Ellis offers minimal dialogue or exposition here, instead keeping the reader’s attention fixated on the blow-by-blow action. At the book’s midpoint, though, the story pivots to become a heavily dialogue-centric thriller tale.

The Batman’s Grave #2 offers engaging storytelling and an intriguing premise. Ellis manages to forge a unique persona and voice for our three central figures (Bruce, Alfred, and Jim Gordon). Each feels like a distinct and fully-fleshed out character in his own right. This can be undercut at some points, though, by inconsistency in the dialogue.

The characters’ stilted and stiff dialogue was perhaps my main objection to the first issue. While it’s better in The Batman’s Grave #2, the quality of the lines vary throughout. Occasional, awkwardly-worded statements jump out to the reader, interrupting the otherwise smooth flow. For instance, a sentence like “In the meantime, I will have a quiet word with the troops about not thinking about shooting you on sight,” could have been shortened considerably and achieved a greater effect as a result.

Alfred continues his intellectual sparring match with Bruce through the second half of the book. However, it still feels like an afterthought; an under-baked element that doesn’t quite land as intended. Rather than a genuine critique, it reads as rather sophomoric and reductive, presenting offhand observations as serious commentary.

Those issues aside, Ellis’s writing is solid overall. One feels the plot unfold slowly and methodically in these early issues, while maintaining a sense of tension throughout the book. 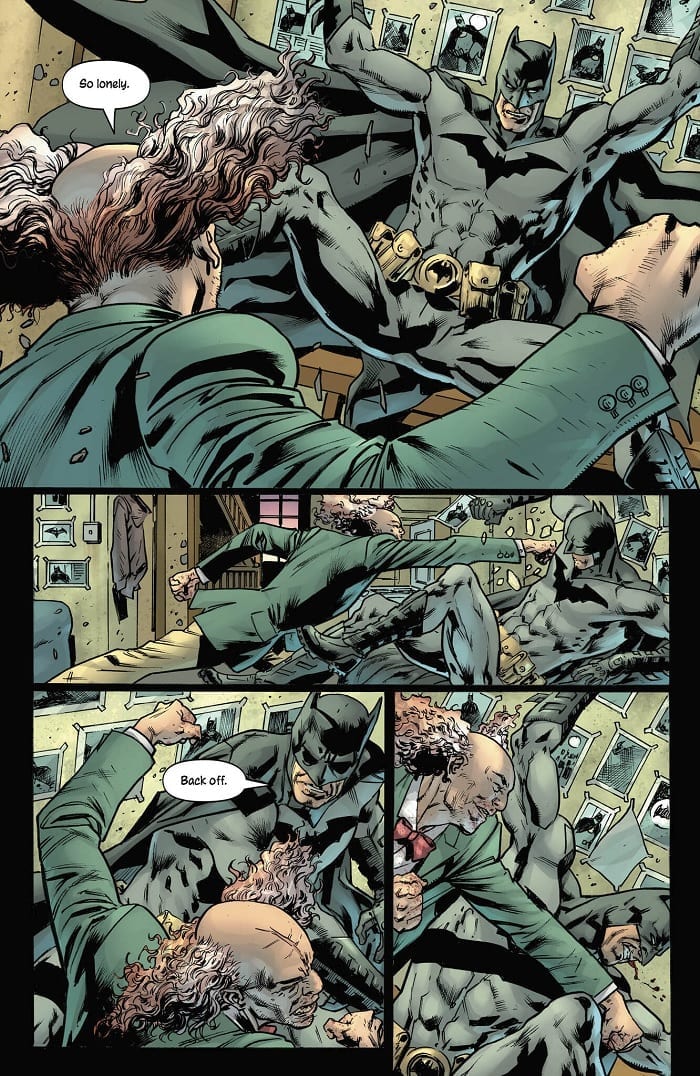 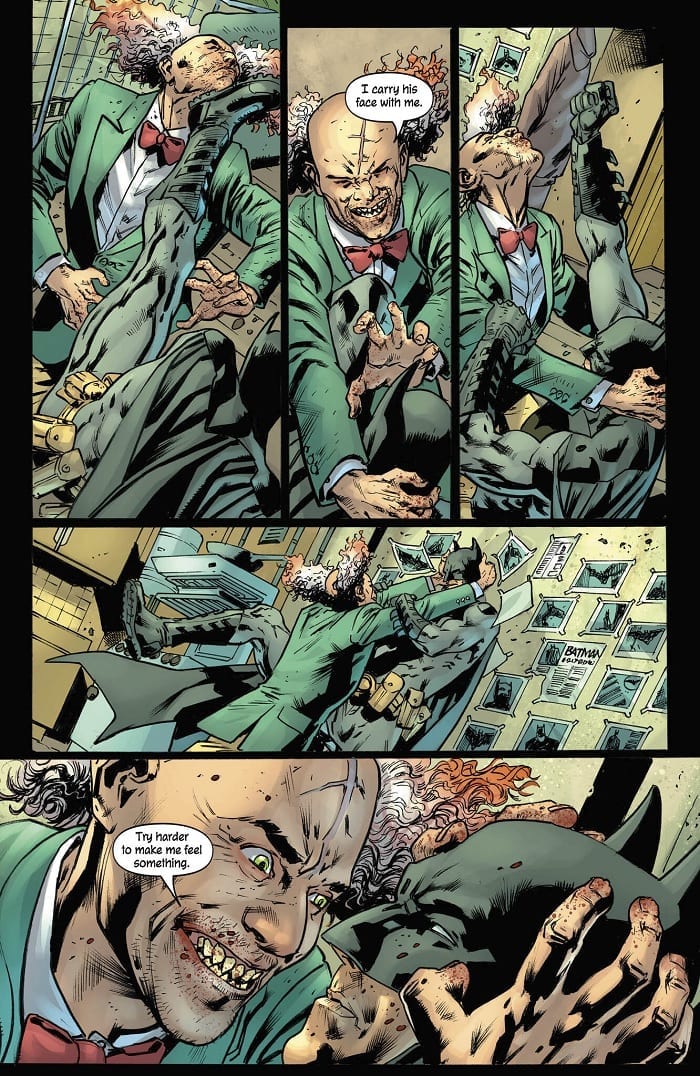 Artist Bryan Hitch provides some engaging and highly-dynamic work for The Batman’s Grave #2. Keeping the reader’s interest through a multipage, blow-by-blow fight sequence isn’t easy; however, he creates an impressive continuity of motion that manages to hold one’s attention. The work draws the reader’s eye fluidly across the page from one panel to the next.

As mentioned in discussing our first issue, Hitch’s artwork is richly-detailed. He allows readers to really immerse themselves in this world, attending to even the smallest background elements.

Of course, some facets of the work are more hit-or-miss. For instance, Hitch uses a lot of close-cropped and off-center images during the fight sequence in The Batman’s Grave #2. The effect is disorienting, but one gets the sense this was a deliberate move to underscoresthe chaos of the fight. As a side effect, though, some panels simply feel uncomposed and oddly-framed.

Alex Sinclair’s colors are a real visual treat here. Sickly green tones dominate the book’s first half, underscoring the twisted nature of the case at hand. Sinclair opts for a bright gold as a dominant tone for the book’s second half; an interesting choice, given it’s a night sequence. The effect works, though, giving the viewer an impression of the blinding lights of the Gotham skyline. 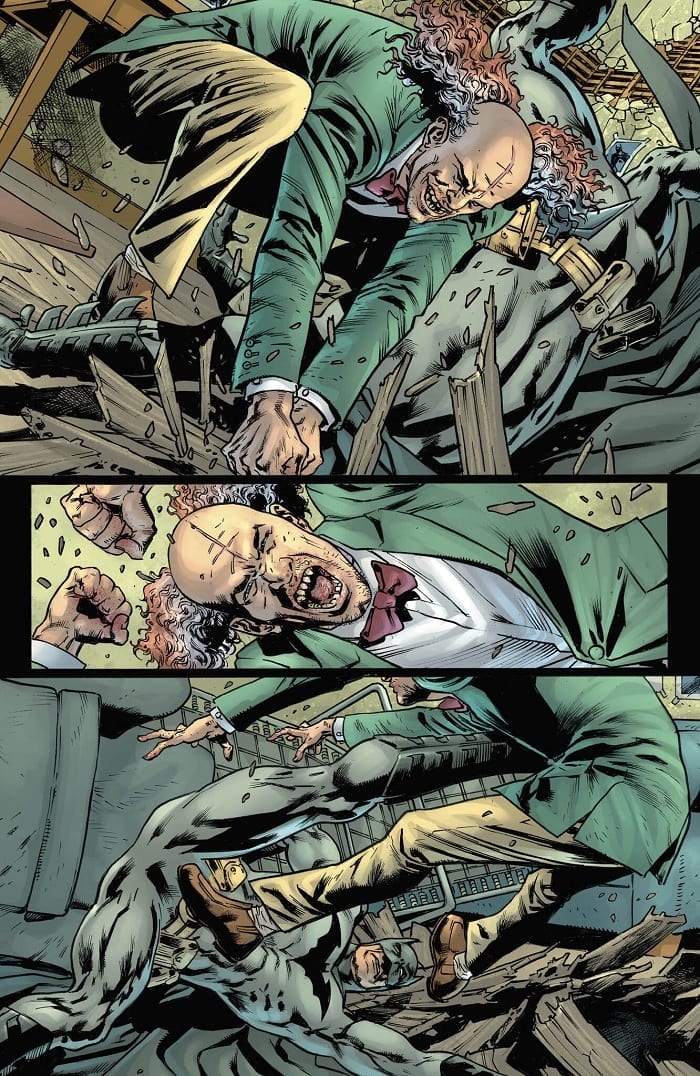 The Batman’s Grave #2 continues on from the first issue, improving on key shortcomings in that first book, without dropping the ball in any other departments. Although the dialogue could use some polish, the intriguing narrative and excellent artwork make it worth picking up.

Review: Cannibals & Cops in THE BATMAN'S GRAVE #2BATMAN'S GRAVE #2 takes the elements that worked in the first issue and improves on most of them. While I still had some gripes with certain facets of the book, it's definitely a solid read.