Review: Entering the Mind of a Dead Man in THE BATMAN’S GRAVE #1

Bruce Wayne’s had an interesting relationship with death over the decades. From apparently dying and traversing millennia of human history, to possibly having died years ago, different interpretations have run the gamut. In The Batman’s Grave #1, out this week from DC Comics, the creative team of Warren Ellis and Bryan Hitch offer another meditation on Batman’s mortality, seeing it through the eyes of a murder victim. 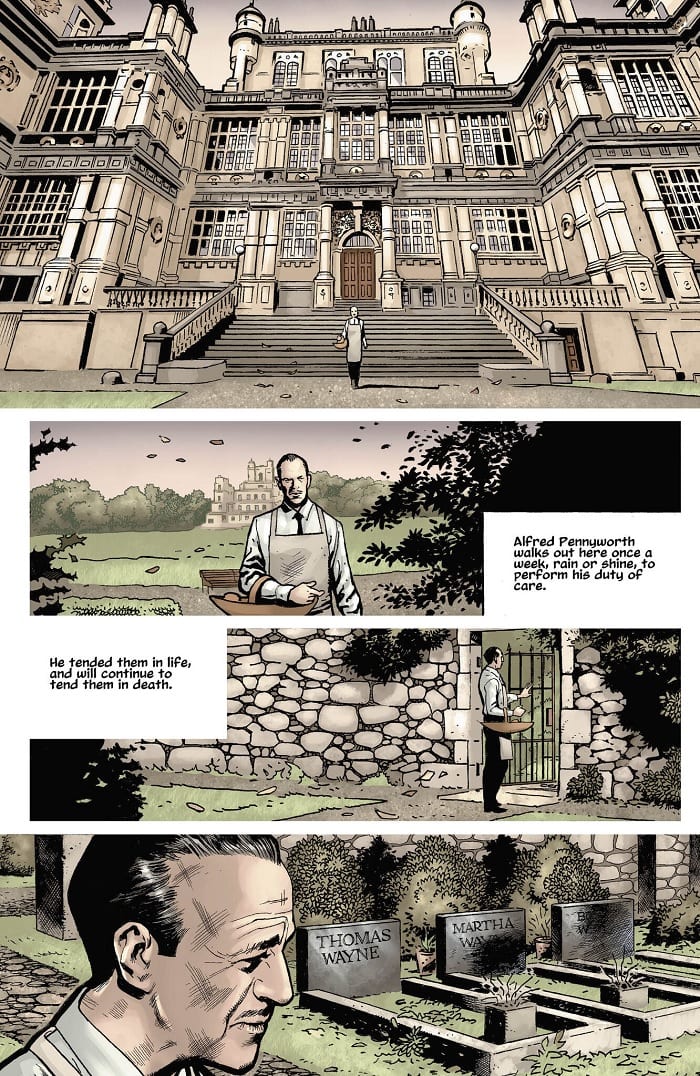 The Batman’s Grave #1 is a multifaceted narrative. It’s a classic detective story on the surface, but there’s heavy foreshadowing of tragedy to come. And, while the mystery seems like a fairly open-and-shut case, there’s more going on here than a simple killing.

The highlight comes later in the book, when we see Batman getting into the headspace of the victim. Suddenly, what was a very straightforward story begins to play with the notion of identity. Bruce and the murder victim become one, and it’s hard to tell where one persona ends and the other begins. As Bruce says earlier in the book, he knows how to inhabit the mind of a crime victim, which he does with gusto.

The core of the narrative is solid. However, a lot of the peripheral elements attempting to shape the contours of the story fall flat.

The dialogue feels stilted at points, as though it serves primarily to exposit to the reader. At other points, the dialogue is clunky and borders on being overwritten. For instance, when a couple are attacked in alley, their assailants speak a in cryptic and unnatural manner, with the scene ultimately proving to be mostly superfluous anyway.

At another point, a character describes someone’s appearance as “like someone put an epileptic fit in a pair of bad shoes”—a bit of a mixed metaphor that doesn’t really land. Then, there’s an attempt at social commentary and class analysis from Alfred. However, it doesn’t really go anywhere, ultimately reading as shallow and half-baked as a result.

No one element sticks out as too egregious. Together, though, these minor flaws detract from the quality of the whole. 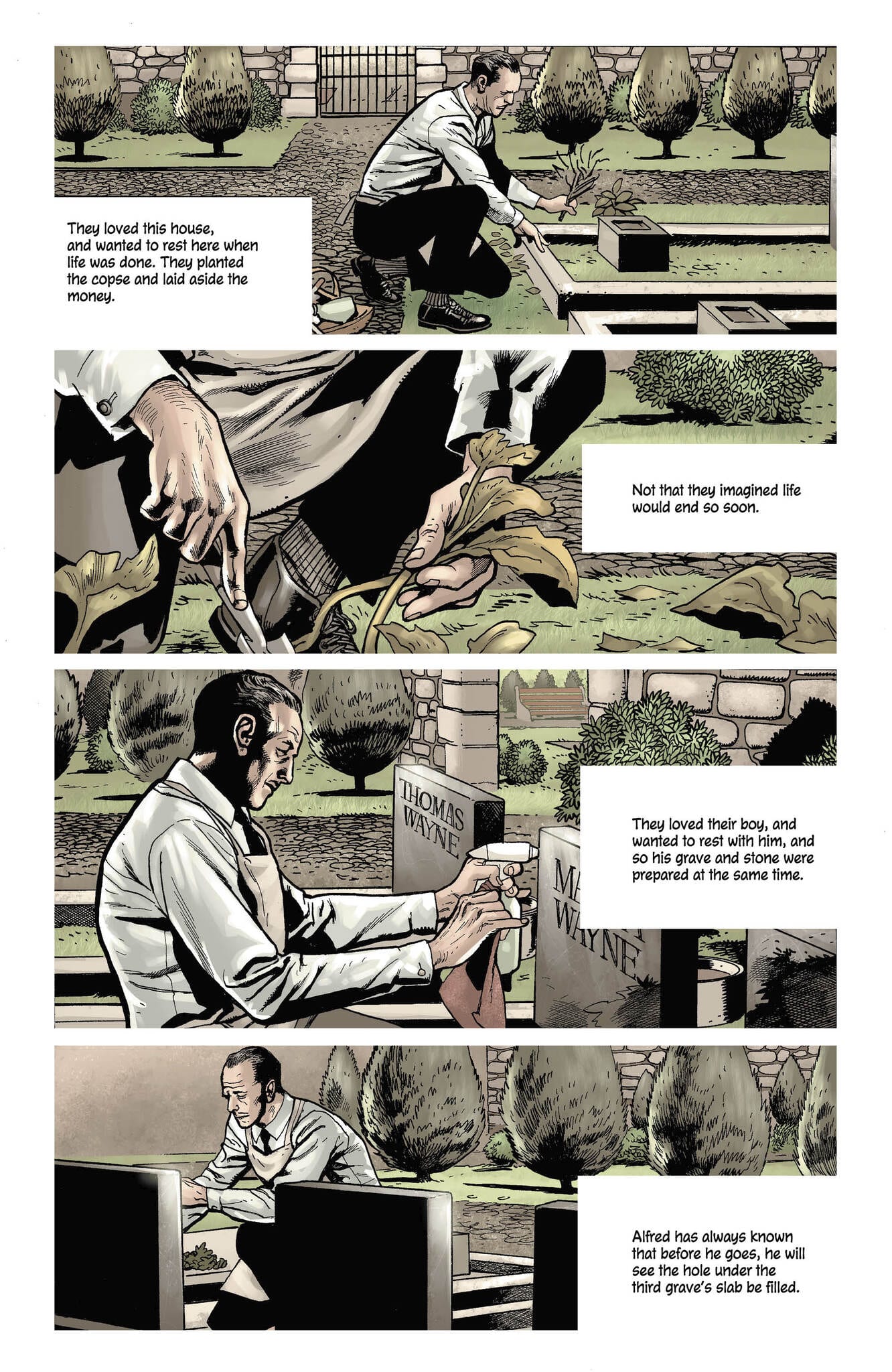 Bryan Hitch’s artwork is superbly detailed. Backgrounds and cityscapes are richly illustrated, right down to product labels and the glowing neon signs congesting Gotham’s streets. The character designs are also exquisite, showing that same level of care and attention to detail in the craggy faces of an elderly man, or the festering flesh of a corpse. The level of detail present helps immerse the reader in this universe, making the work feel grounded and believable.

Hitch doesn’t allow the detailed illustrations to carry too much of the weight, though. Each panel radiates with energy, with dynamic and lively illustrations keeping the reader’s eyes focused on the page. It’s a demanding task for an inker to match, but Kevin Nowlan dutifully offers the kind of delicate finesse necessary to bring Hitch’s pencils to life.

Colorist Alex Sinclair brings skill to the table as well, taking on the challenge of Hitch’s detailed linework. Washed-out greens, blues, and beige dominate much of the book, making the images feel very cohesive. That said, the uniformity of tone can make the work blend together, too. There are reds that serve to accent some panels, but not much really stands out. The coloring is technically brilliant and firmly realist, but sacrifices a bit of flair in the process. 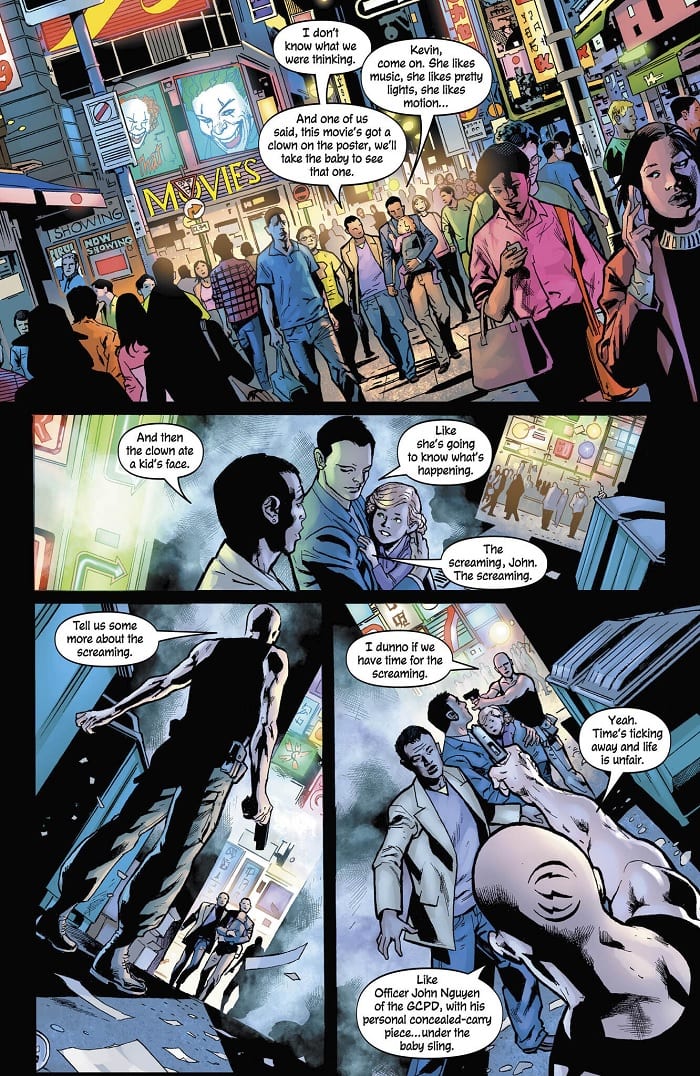 The Batman’s Grave #1 is an intriguing opening chapter. Although Ellis doesn’t land every element of the book, I’d recommend checking it out.

Review: Entering the Mind of a Dead Man in THE BATMAN'S GRAVE #1Despite some storytelling hiccups, THE BATMAN’S GRAVE #1 is an engaging opening chapter. I, for one, am at least curious to see where the premise takes us.