Nearly seven months after the last installment, Batman: Damned #3 finally closes out Brian Azzarello and Lee Bermejo’s saga. It’s been an abstract and meandering ride, overshadowed somewhat by the controversy around the first issue’s withdrawal from shelves. Now, though, we finally crossed the finish line.

After being rescued from entombment by Swamp Thing, Batman goes off to confront the harsh truth of his situation. By the issue’s end, he learns what really happened on that bridge.

Batman: Damned #3 is the strongest of the three books in this series in terms of storytelling. The first two were largely a surreal journey through a dark Gotham nightscape, producing many questions—and questionable plot decisions, like Harley attempting to rape Batman—with few answers. Batman: Damned #3 is effective at taking much of what was presented and contextualizing it. In context, we see the book’s end foreshadowed throughout.

One of the book’s highlights is the interaction between Batman, Swamp Thing, and Constantine. The latter provides the same sardonic, glib commentary he has throughout the series. The former two, in response, voice their disdain for him. Their interaction provides a rare bit of comic relief in a narrative that tends toward an overwhelming grimdark tone.

While this is a Batman book, it hinges more on Constantine to drive the narrative. Although providing the same gallows humor commentary, his dialogue takes on a different context. Here, we see he’s less of a passive commentator, and more like Batman’s spirit guide. In moments, he even reveals compassion for the Dark Knight, trying to stave off the revelation of a harsh truth at the book’s climax.

Batman: Damned #3 provides a complete arc to the story. That said, one of the book’s core plotlines—that of Thomas Wayne’s infidelity—doesn’t seem to go anywhere by the end. It takes up a not-insignificant portion of the previous issue. However, Azzarello seems to drop the thread, rather than tie it into the narrative in a clear, coherent manner. This is not the only underdeveloped element of the narrative, but it’s the most glaring omission. 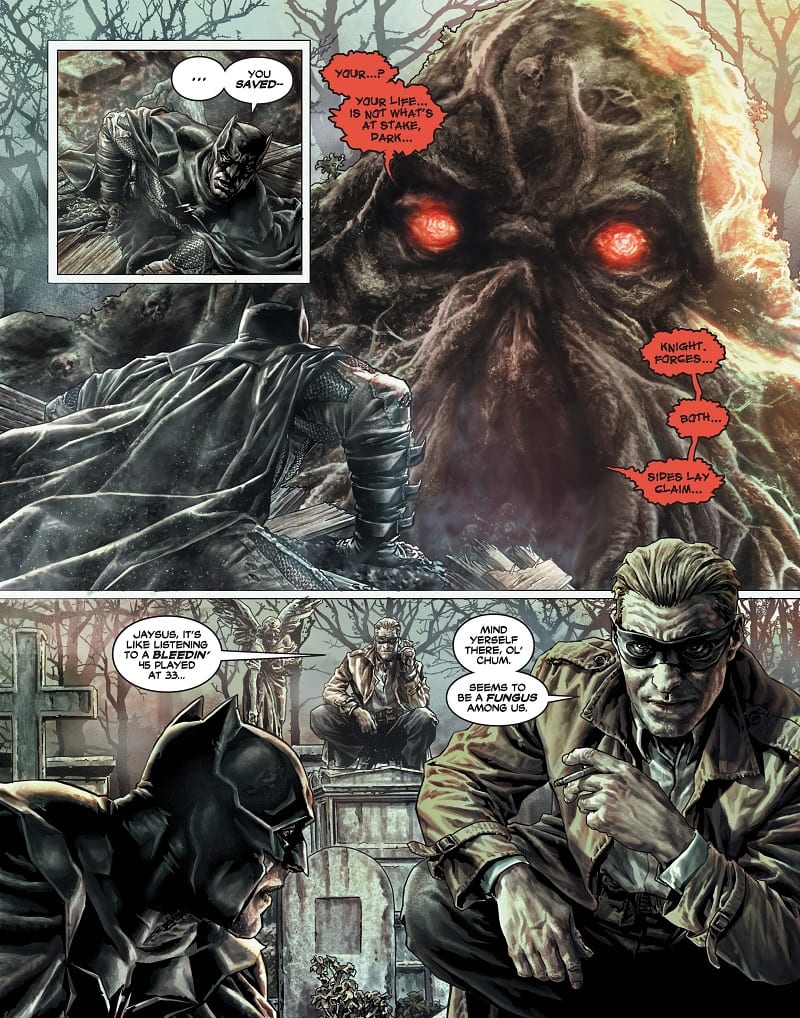 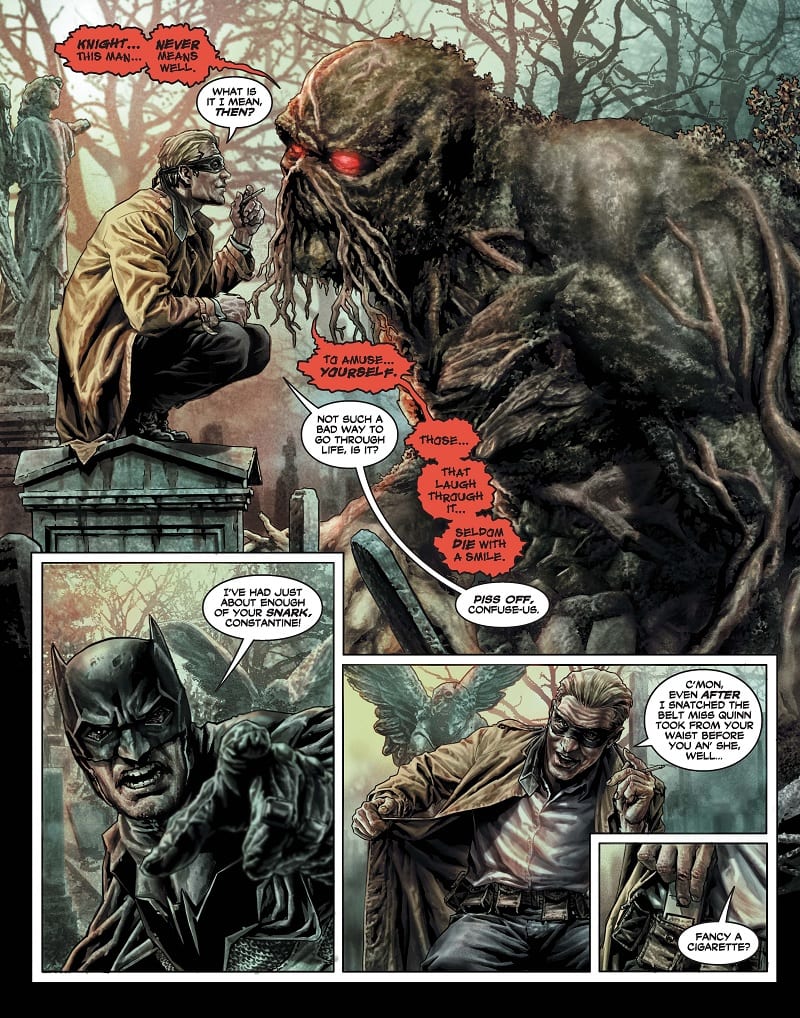 Again, Bermejo’s artwork is the real show stealer here. There’s incredible attention paid to detail; backgrounds are painstakingly finished, while incidental objects from the gnarled tree bark to the grime on a tombstone’s face are presented with painterly attention.

He does an excellent job of conveying motion and a sense of liveliness through the art. Even in the quieter moments of Batman: Damned #3, the images on the page carry vivacity and a dramatic weight. Though the writing can tend toward being overdramatic at times, the art manages to sell it. As with previous installments, the art alone could make this book worth buying.

The colors are suitably moody. The work is meticulously detailed, but with a consistent grimy, dingy, and cold impression. Throughout the book, the readers feels like they’re viewing the world as a place devoid of life…an effect which works incredibly well alongside the other elements.

Overall, Batman: Damned #3 provides a satisfying ending to the miniseries. Not every element falls into place, but it effectively caps-off a dark narrative with a consistent mood and tone.

There are some dropped threads and unnecessary elements at play, but BATMAN: DAMNED #3 is a satisfying conclusion to the series. It's the strongest from a narrative standpoint, with stellar artwork that would justify the price of the book on its own.Review: A Suitably Downer Ending in BATMAN: DAMNED #3