Billy Batson unleashes fury on the World’s Finest in Batman/Superman #2, an action-packed chapter out this week from DC Comics.

At the end of Batman/Superman #1, the Robin lurking in the Batcave is revealed to be an infected Billy Batson, the Shazam Who Laughs, and this issue picks up right where it left off.

Joshua Williamson scripts this feverishly paced issue while David Marquez pencils some of the most gorgeous interior art in comics right now. Alejandro Sanchez adds glowing and vivid colors that keep comic readers coming back for multiple reads. There is enough detail in the pencils and colors to spend a good hour admiring them. 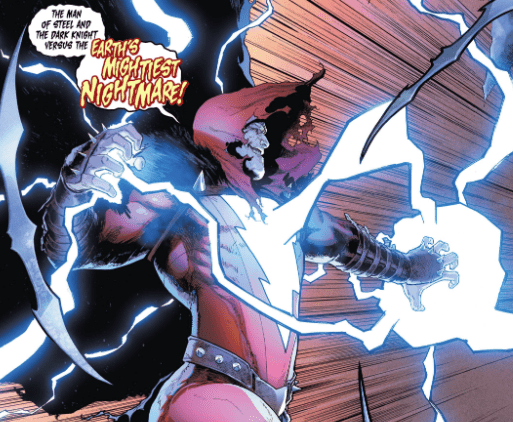 John J. Hill takes care of the letters and does a phenomenal job with the non-stop action in this issue. The lettering is fresh and always evolving as the size varies with almost every sentence spoken. The word bubbles clearly show what is meant to be heard by everyone and what is intended for themselves. If I were a letterer for DC Comics, this is definitely an issue I would love to work on, as it looks like it was fun as hell to be a part of.

Williamson is a fantastic writer when it comes to horror, so having him writing a Batman Who Laughs story is a treat. As more and more heroes are infected with the BWL’s toxin, tapping into his horror background promises to be quite the ride. That being said, the best part of this series so far is Marquez’s artwork and Sanchez’s colors.

When there’s magic, laser eyes, expensive technology, lightning, and a fortress of solitude, boring art, and dull colors should never be allowed. I don’t think I’ve ever seen a night battle glow so much in the moonlight and lightning blasts. Sanchez’s colors pop off the page like there are little diamonds in the paper.

Marquez adds so much detail into every fraction of his work. Where some artists will save all the detail work for the focus of each panel, Marquez spends time on fingernails and chin dimples. I can’t say enough of how gorgeous this book is and how many times I’ve looked through it without reading it.

Batman/Superman #2, starts with Gordon getting the Batman Who Laughs into the GCPD armory. Gordon makes a point to mention all the evidence, weapons, and poisons stored in this vault, so now we know the BWL has access to some of the most dangerous items and plenty of information on Gotham’s worst criminals. If we know anything about Batman, it’s that information is just as useful of a weapon to him as a Batarang.

In true Joker fashion, Shazam changes back into Billy Batson multiple times to trick Batman and Superman into letting their guard down or holding back. It works every time. Their desire to always save everyone works against them at every turn. Now that the Batman Who Laughs has access to the GCPD armory there isn’t a weakness he doesn’t know how to exploit. No one in the DC Universe is safe.

Batman/Superman #2 is exactly what the casual fan wants when they pick up a comic featuring the World’s Finest. Plenty of action from the start and gorgeous fight scenes make this a book any reader would enjoy. As the Batman Who Laughs continues to wreak havoc on the DC Universe, and his plan unfolds, the World’s Finest heroes will have to work together in ways they’ve never had to before.

Strap in for the ride; the infection is spreading.

What did you think of the 2nd issue of Batman/Superman? Let us know in the comments below.

3481
Find out how to get the
Monkeys Fighting Robots magazine!