Review: BATMAN/SUPERMAN #1 Is A Major Event For DC Comics

Continuing the story of The Batman Who Laughs, DC’s newest ongoing Batman/Superman #1 sees the duo take on villainized heroes and friends. The plot may not be anything new or groundbreaking, but with the duo of Batman and Superman, it’s an entertaining ride.

What’s a better combination than peanut butter and jelly? The classic combination of light and dark, yin/yang, Boy Scout and Dark Knight, we’re talking about Batman and Superman! 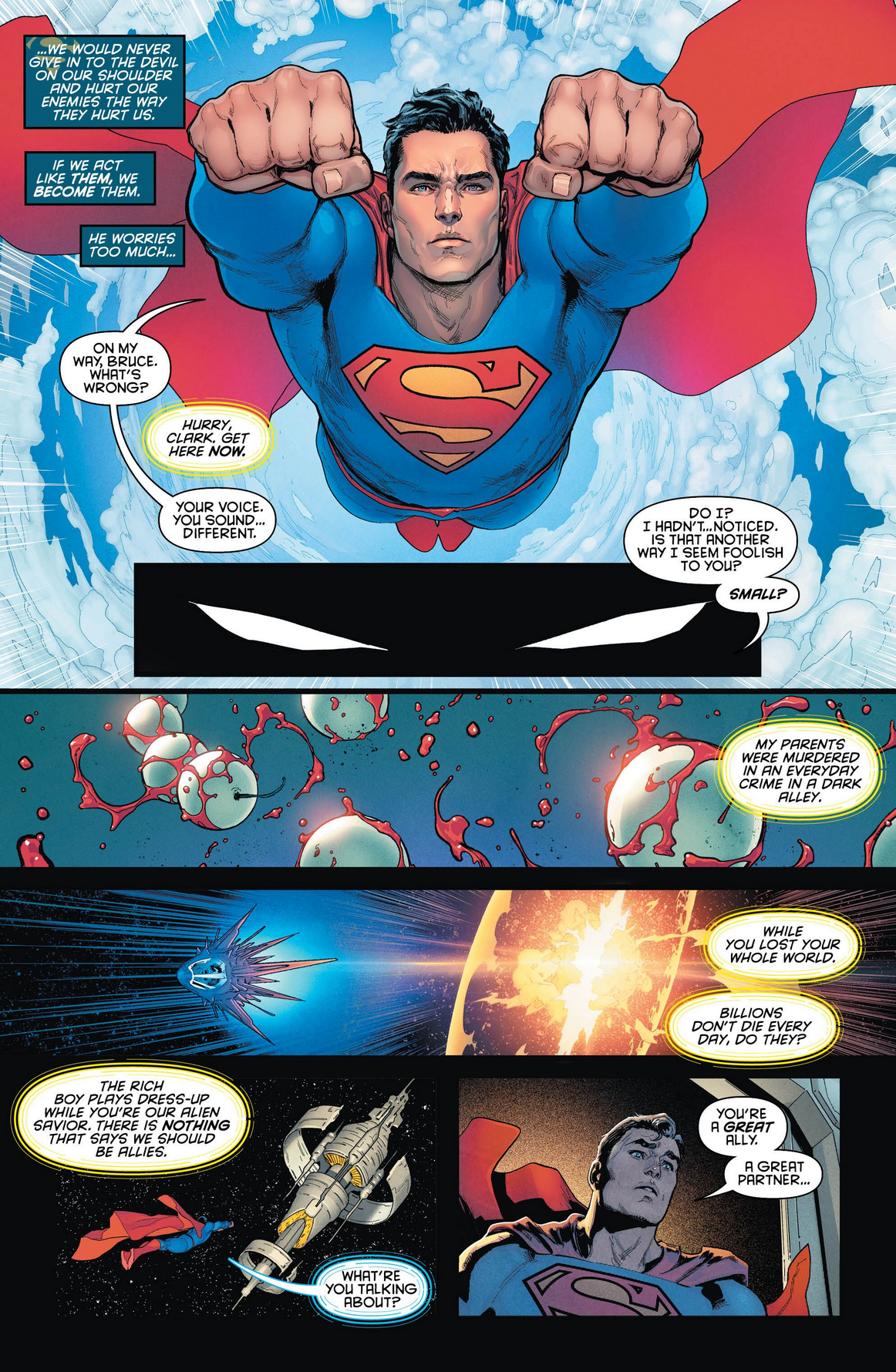 Writer Joshua Williamson quickly introduces us to the Batman Who Laughs with a gore-filled origin. For those that didn’t follow his introduction in 2017’s Dark Knights: Metal (check out our Reviews of Metal and more here). Transporting the reader back to Earth-0 we learn our Batman was regaling this story to Gordon, who in turn tells the Dark Knight that he has heard this. Per usual with Batman, nothing is what it seems, as he was talking to Superman, not Gordon, with Superman arriving on the scene in a two-page spread. This spread is a great first page to show the duo, with Superman carrying a fainted Killer Croc as he hovers above Batman.

Primarily this moment furthers the point of how powerful Superman is compared to Batman as the Boy Scout nonchalantly apologizes, “Had some business to take care of on the way over.” Killer Croc seems like a cat in a tree for Superman. Artist David Marquez highlights their differences by having Batman hold his cape in a manner of nearly hiding, while Superman is flying above his friend. Batman/Superman is Marquez’s first work at DC Comics.

Marquez’ pencils and Sanchez’ colors work well with the story. The dark mood plays off Marquez’ realistic pencils as the story seems like it could happen in real life. Sanchez’ use of neutral colors spotlights this aesthetic.

The colors by Alejandro Sanchez show the duo in their token themes by having the light hit Superman while draping Batman in shadows. This lighting isn’t limited to this page, but runs throughout Batman/Superman #1. While this dark and moody coloring isn’t only on Batman but all through Gotham and other residents; in comparison, the few scenes in Metropolis are bright in tone. This theme is played within Williamson’s inner dialogue and interactions between the duo.

There are a few moments in Batman/Superman #1 where letterer John J. Hill’s work shines through. The transition between Batman to The Batman Who Laughs is an excellent example of changing the dialogue box and font to match what is happening. It would have worked well if Hill kept this theme throughout the book. When we see a villainized Shazam, all that is different is a shaker box/font. In Shazam’s moment of transformation, a change of color to red would have helped dramatize the scene. 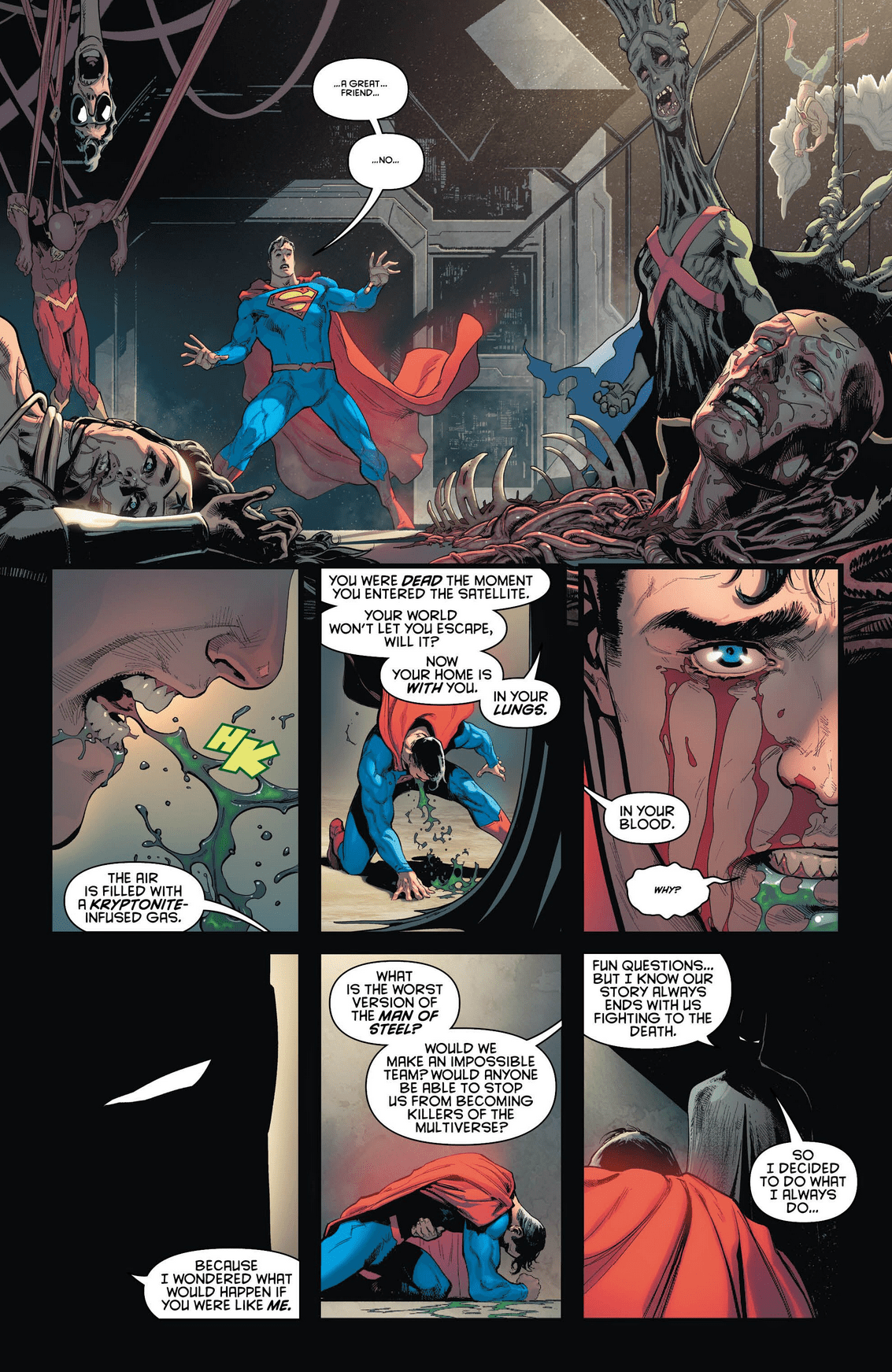 Batman is more planned oriented, Superman seems more laid back and “come as it may,” which Bats isn’t a big fan off. In their inner thoughts, the characters act as opposites, but not in a disrespectful manner, more as how two friends would act. Williamson has a great understanding of the characters and how they interact. Beginning the main plot point Gordon informs the duo of a kidnapping by a “Superman” that is laughing, making the team believe that the Batman Who Laughs may be behind it. This plot comes hot off the ending plot of The Batman Who Laughs, but Williamson doesn’t test if you’ve read it. Instead, the backstory is explained by Batman and Superman as the story moves along.

Batman/Superman #1 doesn’t feel like the start of an ongoing. Instead, it feels like the beginning and middle of a line-wide event. DC Comics has been planning something akin to this story with the Batman Who Laughs since his introduction. Maybe DC Comics should’ve had this story as an event instead of making it the core story in a new ongoing. This story even has tie-ins naturally making it feel like a 2019 event, but alas it’s not.

Batman/Superman #1 is an enjoyable ride, but instead of being an ongoing series, the book should have been a limited series. This might bother new readers who were going in looking for a fresh start. With the Tie-ins titled with a heroes name then Infected it would’ve worked better if this was called DC infected or something akin to that. The word infected brings up another point.

Heroes turned into a villain is such an old trope that now it feels overdone, and nothing new. My feels on this could very well change by the end of this overreaching, line-wide plot, but we won’t know for another few issues. Plus, that trope sells like Aunt May’s wheat cakes!

Well, when Superman tells you that you probably should listen!

Side Note: Why the hell couldn’t Superman hear Billy’s heart? Just a minor flub on his powers, but that seems to always happen when necessary for plot reasons.