Review: An All-Out Assault on the Batcave in BATMAN #81

Plans, plans…everyone’s got plans. The question in Batman #81, out this week from DC Comics, is that if everyone’s a step ahead of their foe, then who’s really in command of the situation?

Damian—never really a captive, as it turns out—allows the rest of The Family into the Batcave. Now, as Bruce and Selina continue working their way through Gotham’s underworld, The Bat Family launches an all-out assault on Thomas Wayne. 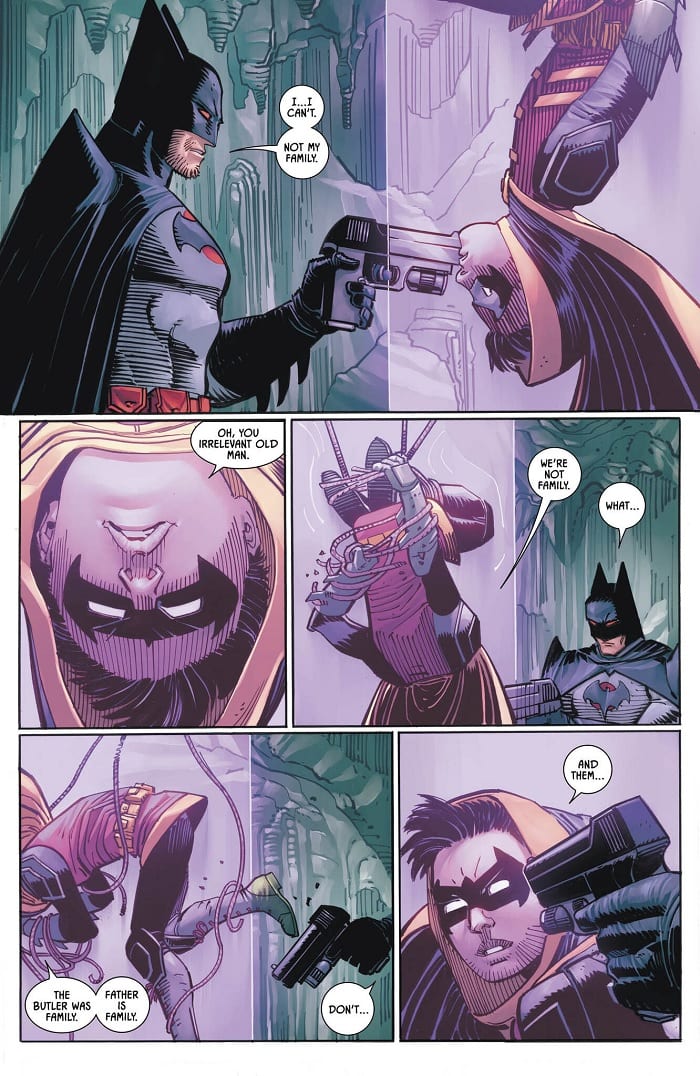 Writer Tom King packs a tense narrative into Batman #81. Just when one party seems to have their opponent on the ropes, the tables turn suddenly. The writing is well-paced as well; each of the twists and reveals feel evenly-spaced through the book. However, although well-paced, it is still dense and prone to summary, rather than storytelling.

There is so much information dumped on readers here, it can be hard to keep an eye on the breadcrumb trail. As a result, it’s hard to recall all the details sprung on readers. So much so, in fact, that one will likely require multiple read-throughs by the book’s end to fully absorb everything.

The main complaint with Batman #81, though, is that much of the dialogue is just Batman expositing to the reader. It’s essentially a “How I Did It” story, with Batman making the claim that everything up to now—his defeat in the pit, allowing Bane and his lackeys to run Gotham—all has been part of his plan. “I wanted them to break me, to see me broken…So that I might discover a way to defeat them outside their watching eyes,” he tells Selina. Of course, it’s doubtful that Alfred’s death was part of that plan.

The Bat Family taunting Thomas as they beat him is a little melodramatic, to be honest. They further exposit how they decided on their plan mid-fight, which leads to some awkward and stilted dialogue.

As it is, Batman #81 is fairly compelling, but largely due to the momentum of previous chapters. It would be a shame if, as King’s run comes to its climax, the density of the story itself forces the last few issues to essentially become self-summaries in order to tie up the loose plot threads. 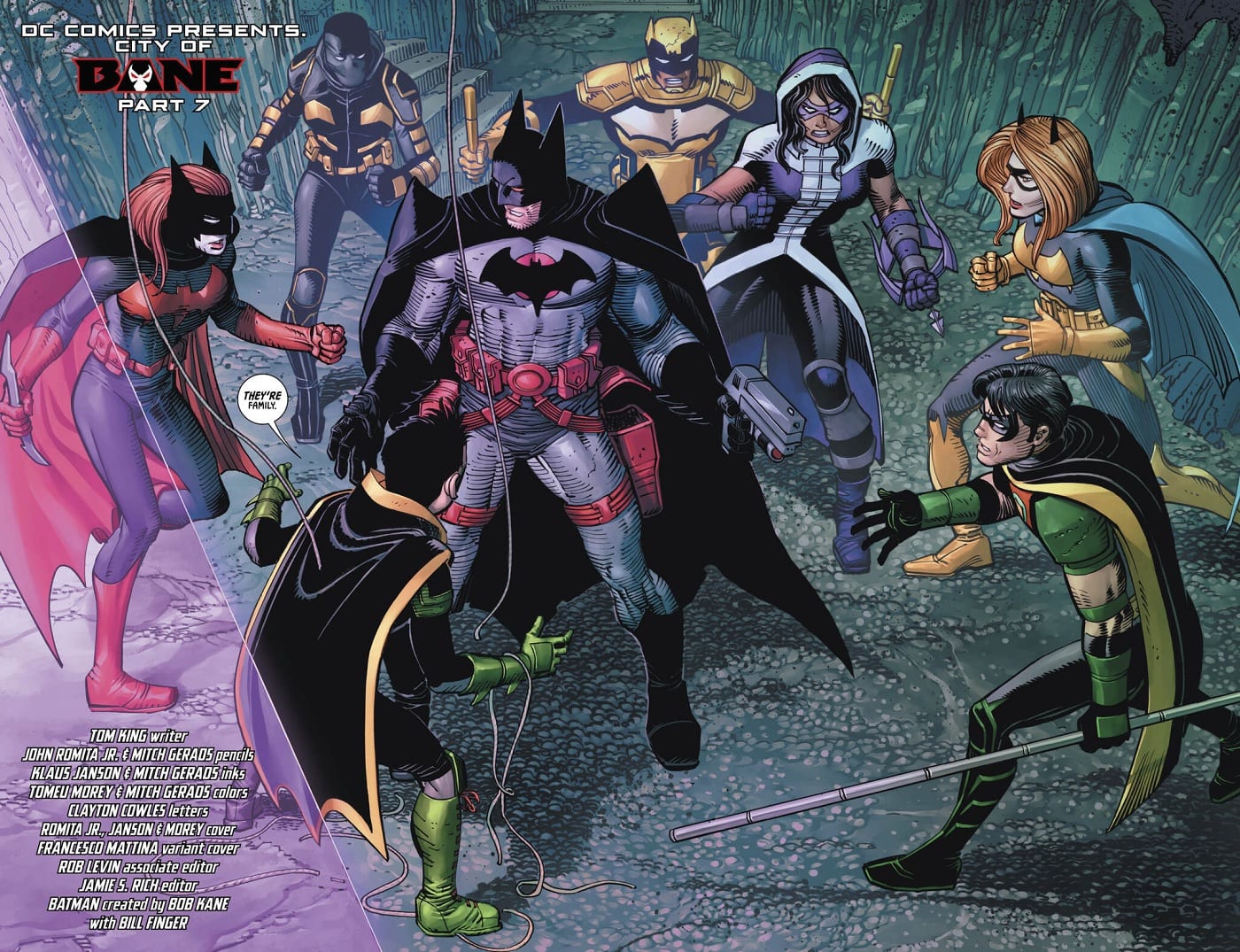 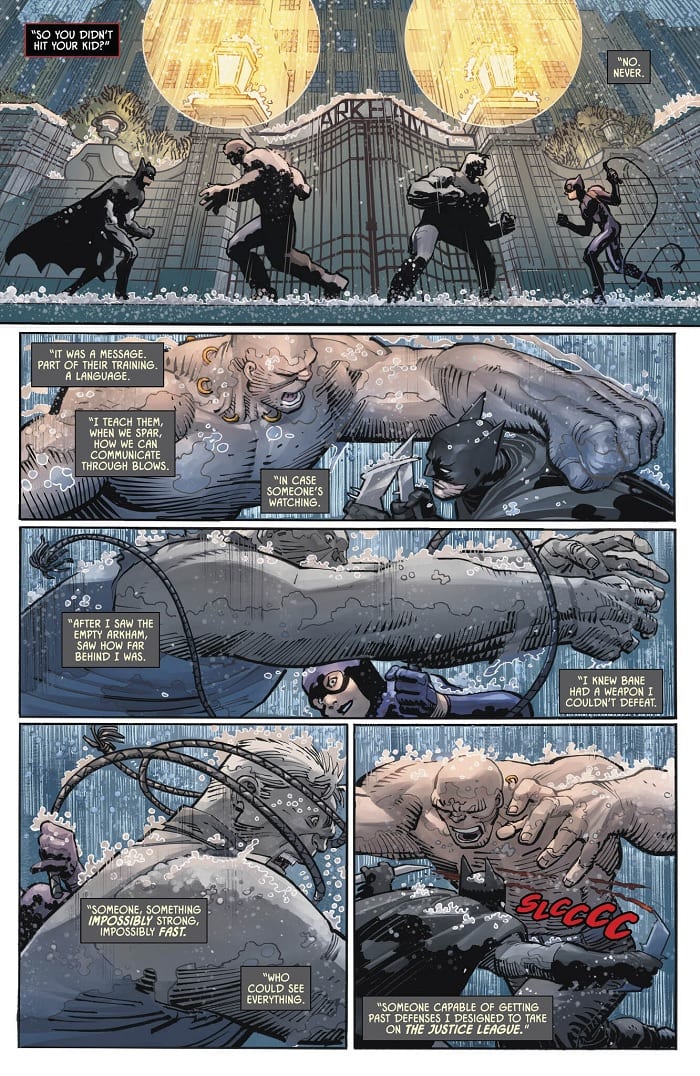 The visuals in Batman #81, courtesy of John Romita Jr. and Klaus Janson, are exceptional. They pack the book with great, highly-dynamic action illustrations from cover to cover.

The team keenly and skillfully illustrates each individual panel. Beyond that, though, the work manages to carry momentum from one panel to the next.

It’s not uncommon for an artist to achieve one effect but not the other. Many are great illustrators, but struggle with tying images together in a sequence, or vice-versa. Fortunately, though, Romita Jr. and Janson both bring their “A” games to the table.

The artists are not always big on fleshing out scenes with backgrounds. Instead, they embrace some interesting textures that provide a backdrop to the character illustrations. It’s an expressionistic approach, and one that could backfire in less capable hands and make the book feel unfocused and unmoored. As with the pacing, though, Romita Jr. and Janson pull off the effect well, so the reader never misses the backgrounds.

Colorist Tomeau Morey shows off some of his best work yet on the series in Batman #81. It’s vibrant and eye-catching, without ever being too distracting to the reader. Morey works with a palette of bold pinks and blues, giving the book a distinct and gorgeously-stylized vibe. The artist slips seamlessly from this aesthetic to a more conventional, realist palette from page to page. Absolutely brilliant work. 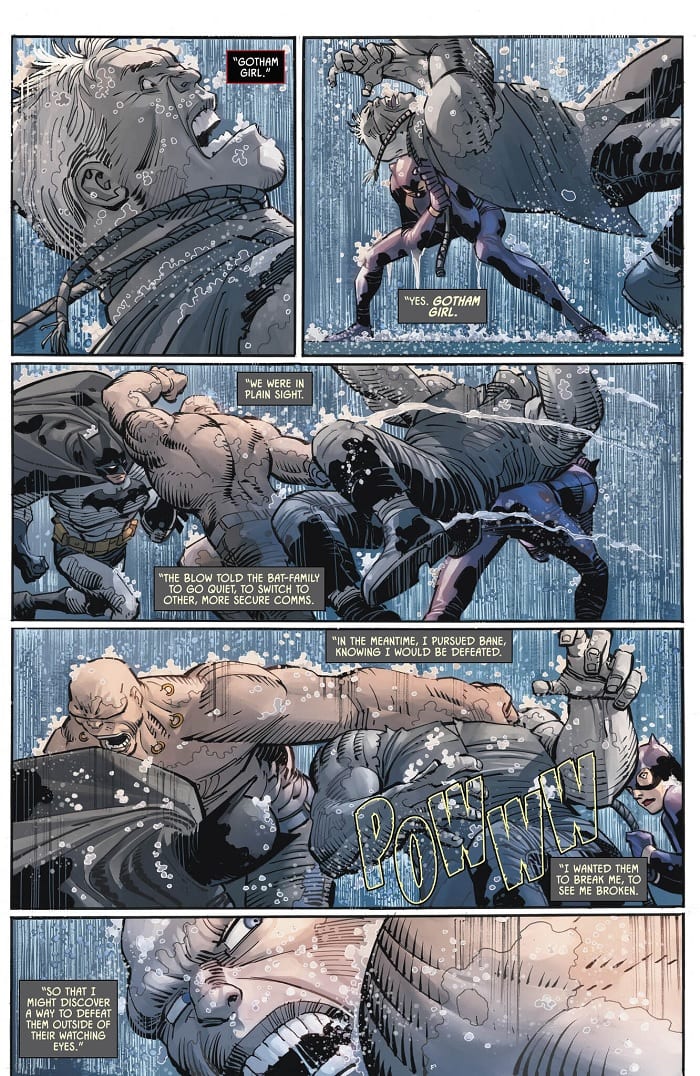 Batman #81 can feel rather like a summary of the story’s climax. King still manages to make it interesting, though, and with the brilliant art working in its favor, this book’s still a winner.

BATMAN #81 is compelling, though much of the actual story here is simple exposition; the Bat Family's "How I Did It" statement. The artwork is phenomenal, though, making for a visually-stunning work.Review: An All-Out Assault on the Batcave in BATMAN #81