Gotham remains “The City of Bane” in Batman #76. The streets are firmly under the mastermind’s control, thanks to the political cover provided by the Luthor administration.

Gotham Girl patrols the city limits, ensuring all superheroes stay out, while Thomas Wayne rounds up the villains within who resist Bane’s control. Meanwhile, Catwoman is in Paris and working as an art thief-for-hire, nursing a battered and unconscious Bruce Wayne.

Bruce Wayne is out of the picture. Bane commands Gotham, enslaving the villains and exiling the heroes. Writer Tom King gleefully dashes even the momentary glimpses of hope again the wall, as if to say, “No. There is no hope.”

Gotham Girl easily overpowers Captain Atom, taunting him while beating him senseless. She demonstrates just how much of a formidable—and dangerous—force she’s become. For his part, Captain Atom bemoans the exchange of justice for security and stability. “Gotham’s peaceful. That’s all they care about,” he says. “Not who’s running it or how. Not the bad being done in there.”

Inadequacy and failure are dominant themes here. We see multiple characters confront their own weaknesses when presented with the situation at hand. Kite Man, Captain Atom, even Damian Wayne…all find themselves grasping for something to cling to, whether that manifests as incredulity, despair, or stubborn frustration. Ultimately, though, they are all forced to reckon with their own complete powerlessness and inability to act in Batman #76. It’s an interesting avenue to explore from a character perspective, though King comes close to overplaying his hand in conducting this theme. This is most apparent with Kite Man’s narrative; King offers a glimmer of hope, only to make the twist of the knife that much more punishing.

It is, for lack for a better term…a bummer. That’s not to say it isn’t damned compelling, though.

Our story approaches the nadir of the narrative with Batman #76. We’ve seen Bruce Wayne battle back and overcome the odds time and again, but those odds are stacked heavily against him here. It’s difficult to imagine what King has in store, but given his take on the story thus far, one has to imagine there are a few more twists coming. 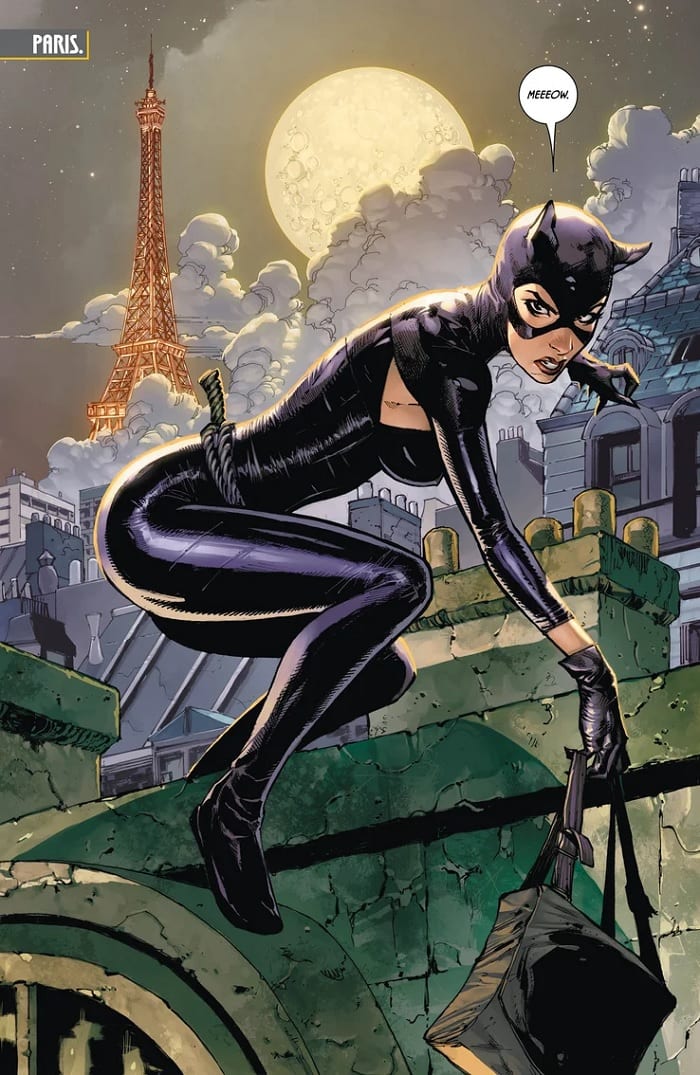 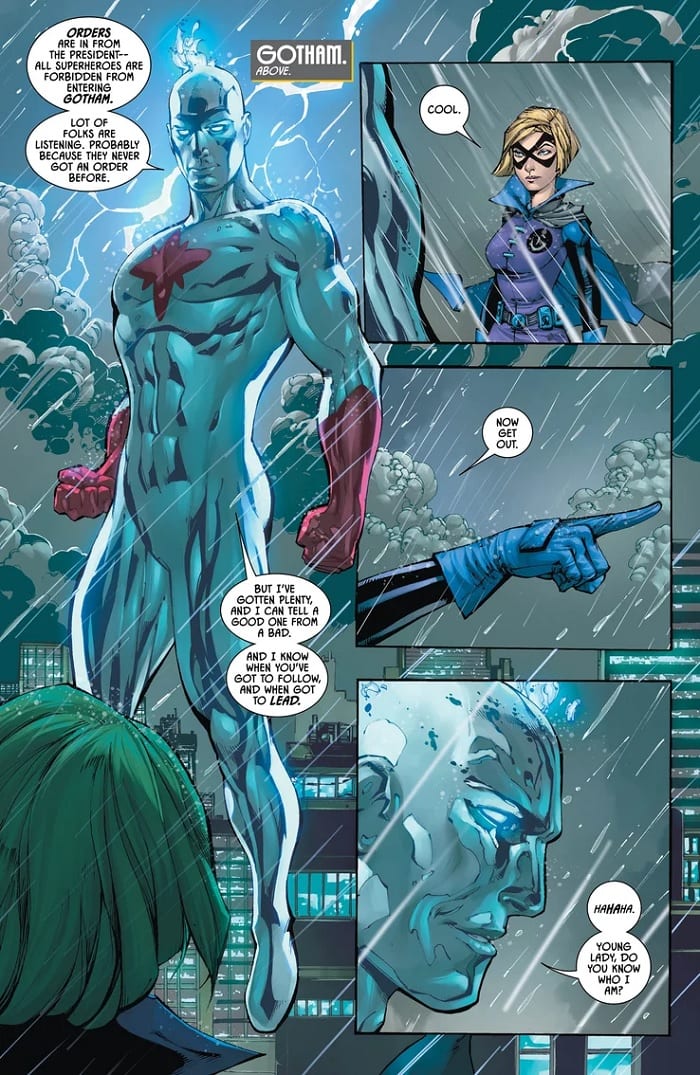 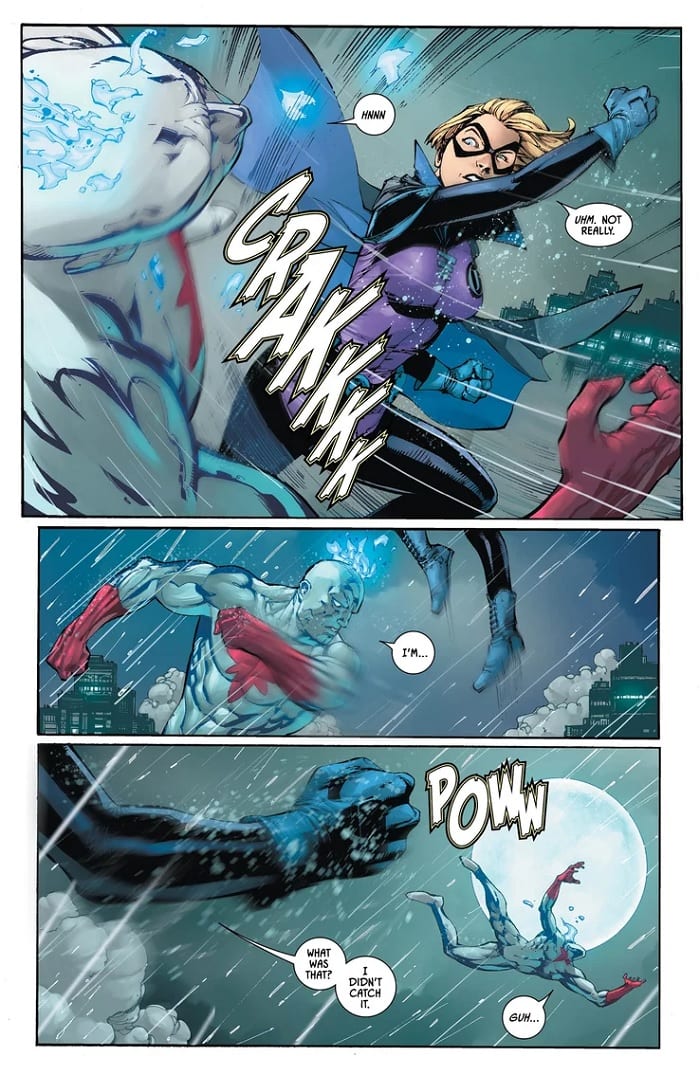 Tony S. Daniel is back on art duties for Batman #76, aided by inks courtesy of Sandu Florea. Following on our last issue, Daniel turns in more quality work here, right from page one. The book opens on an impressive full-page illustration of Selina, before immediately cutting to the showdown between Gotham Girl and Captain Atom. The work conveys the tension of the story well, providing dynamic action and that flows nicely from panel to panel.

He doesn’t delve deep into experimental techniques or abstraction. That said, he employs repetition with variation at multiple points in the book, each successive panel focusing in on the subject to heighten the tension. It’s an effect that can easily become cloying and obnoxious if used improperly. Here, though, the trick works nicely.

Daniel and King have great chemistry as a creative team. The artist expertly nails the story beats in Batman #76, forming a full and cohesive final product.

As with our last issue, Tomeu Morey’s colors are vibrant and eye-catching. They’re warm, but have an edge of grit to them, which works well tonally for the book.

Batman #76 is another quality entry in the City of Bane arc. The tension continues to build for the conclusion of King’s epic run on the series. Pick it up now at your local comic book shop.

Review: Gotham is Quiet Tonight in BATMAN #76BATMAN #76 is another great entry leading up to the final climax of King's run. It's tense, well-paced, and has an overwhelming sense of grim despair, which sets a great tone for what's coming next.