It’s tough writing a series that’s about something so black and white. Dark Horse’s Barbalien: Red Planet is one of those series. It’s about the struggle between cops and the gay community during the AIDS crisis. There’s not much room for interpretation there. The cops were bad guys, beating people for being different. But that didn’t stop writers Tate Brombal and Jeff Lemire, artist Gabriel Hernandez Walta, colorist Jordie Bellaire, and letterer Aditya Bidikar from giving us a nuanced, layered, human story about a man stuck in the middle, in their first issue. Unfortunately, Dark Horse’s Barbalien: Red Planet #2 loses a lot of that nuance and subtlety.

There’s an aspect to Brombal and Lemire’s lack of subtext that works. Miguel represents the Uninhibited Person. He’s got his guard completely down, and he’s willing to say the truth when no one else is. This works particularly well when he’s shouting through a bullhorn or yelling in a cop’s face. Miguel also acts as a kind of “Beatrice,” or guide, through the underground gay “Paradise” Markz has stumbled upon. He explains the ins and outs of their scene, asks cutting questions, and provides no judgements. But when Miguel is in his personal life, there’s little room for interpretation. Any and all interrelational things that are happening, in every scene, is fully on the table. If Miguel is embarrassed, scared, or lonely, he lets us know. Each time he does, it strikes as a line that should be left unsaid. They’re the moments that were already communicated in the pauses and glances. It’s as though Lemire and Brombal are so passionate about this project, they’re tripping over their shoelaces to make sure everything they want to communicate gets through. It does get through, they just need to trust their readers more. 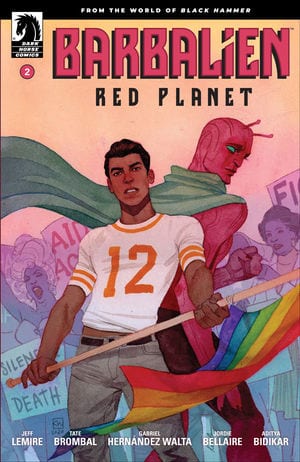 Part of what makes Brombal and Lemire’s script frustrating at times, is that Walta’s art is already telling such a clear story. We don’t need Miguel to tell us he’s terrified. Walta shows it all over his face. And Markz waking up to stare at his police badge speaks more of his inner turmoil than him mixing up who he should be recognizing. Walta gives us every cue we need to connect the silent dots. Even if it’s just Miguel appearing in front of or above Markz in each scene. Walta shows us how Markz looks up to Miguel, through mere character placement. We see how Markz thinks of Miguel as a role model, someone who is as comfortable in their own skin as he would like to be. Walta’s implied storytelling is so efficient, much of the dialogue becomes unnecessary.

Bellaire also helps us see Markz’s identity crisis. Early on in the issue, the soft purples and pinks of the nightclub give way to a bright red. It’s the red of the police lights and it’s accompanied by violence. But the red is familiar. It’s the same shade and color as Barbalien’s skin. This leaves us to wonder, does Barbalien feel like being a cop has become a part of his identity? But as the issue goes on, Bellaire brings in another familiar color. We see a dangerous green that follows Boa Boaz everywhere he goes. This is a similar green to the green of Barbalien’s cape. It’s these aspects to Barbalien’s identity that seem to be ripping him apart. Is he a Martian or is he a policeman? And while Markz knows he’s gay, the nightclub scenes are colored in foreign colors. It’s as though we’re watching other identities pull Barbalien away from accepting his sexuality. Things that feel ingrained in him. But as he boldly ventures in to explore, he’s still scared and feels like it’s a world that’s not familiar to him. 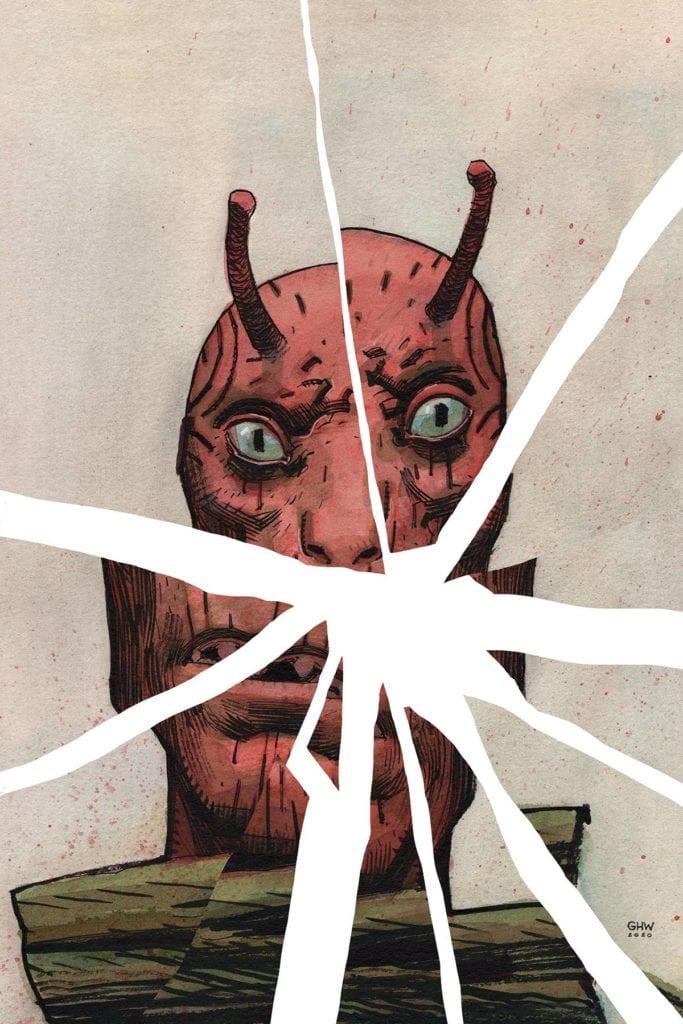 Bidikar does something interesting in this issue. He keeps nearly every line of dialogue in one word balloon. Instead of dividing dialogue up, to give it a sense of rhythm, Bidikar delivers each line in one big chunk. What this means is, the moments with stacked word balloons stand out. “Yeah. Peace is great…” is in one word balloon, conjoined to another with “But my parents taught me survival.” If this line were written like every other line, it might be missed. Instead, Bidikar interrupts our reading to focus us in. Because Bidikar does this sparingly in the issue, we don’t become used to stacked word balloons. We notice each one that comes our way, and give special attention to each of those important lines.

Dark Horse’s Barbalien: Red Planet #2 falters. But it falters because of its creators’ passion. They have important things to say, things they feel strongly about, and their passion overrides their subtlety. This story is important, and if this creative team can dial back on the dialogue and exposition like they did in their first issue, it can also be great. I, for one, expect great things from future issues. Pick up Barbalien: Red Planet #2, out from Dark Horse comics December 16th, at a comic shop near you!