Written by Jeff Lemire and Tate Brombal, with art by Gabriel Hernandez Walta, colors by Jordie Bellaire and letters by Aditya Bidikar, Dark Horse’s Barbalien: Red Planet #1 doesn’t skirt the issue. Set during the AIDS crisis, we follow Mark Markz. Markz is both secretly a Martian and a closeted homosexual. Thanks to Markz’s shapeshifting powers, he works as a cop in the day and flies around as the vigilante Barbalien at night. Watching the gay rights movement gain momentum, Markz finds himself on the other side of the baton. This creative team creates a story that’s poignant and moving, but also gentle and empathetic.

Lemire and Brombal are clearly passionate about gay rights and angry at how the early days of the gay rights movement was full of police brutality. But Lemire and Brombal don’t let their passion get in the way of subtle storytelling. They empathetically step into the shoes of someone who feels caught in the middle. Barbalien, Mark Markz, is stuck between wanting to fit in and wanting to embrace who he is. He’s a gay cop, helping stop the gay rights movement.

Through the voice of the activist Miguel, Lemire and Brombal get the opportunity to voice how they feel about the injustice. Miguel rails against the system and the tragedy, and he does so powerfully. It’s on-the-nose, but it’s a rally. People don’t mince words in rallies. Meanwhile, on Mars, Lemire and Brombal set up blood types as being a sign of a Martian’s standing. This idea that blood could be clean or dirty perfectly sets up the prejudice we see on Earth in the AIDS crisis. So for every shout from the rooftops, Lemire and Brombal have a sly wink and a careful nudge. 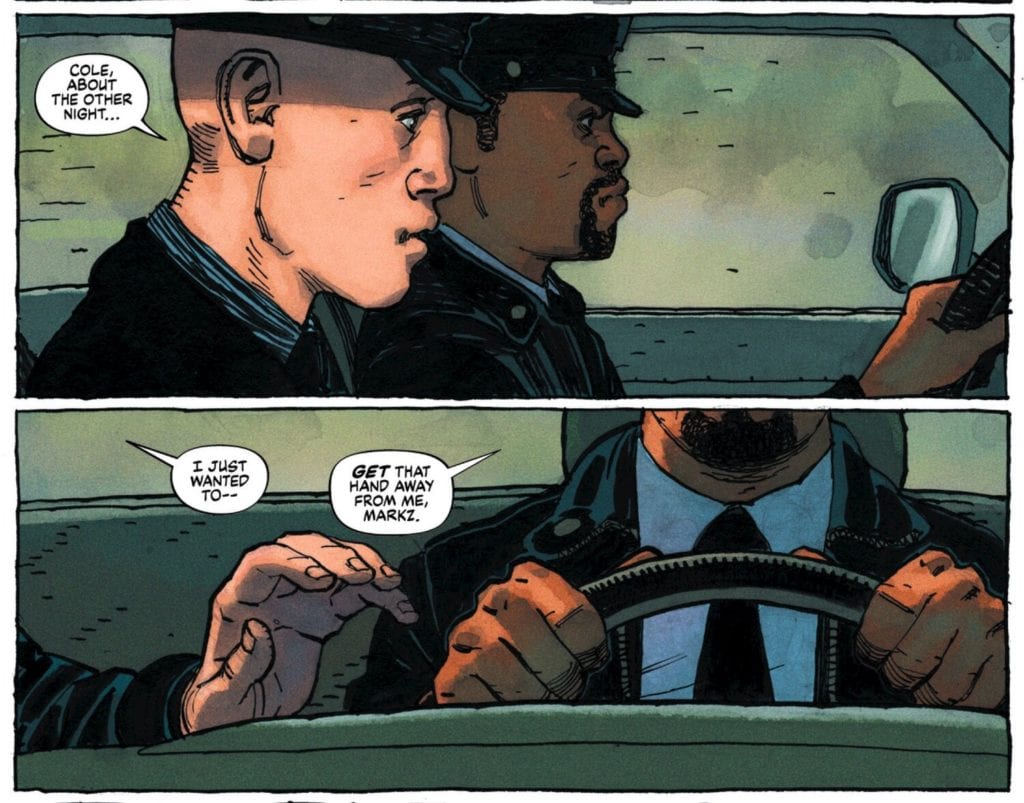 Walta makes us feel trapped. Using a 9-panel grid, Walta shows Markz’s usual routine. In the left hand column, we see Barbalien rescuing a child from a burning building. In the middle column, Office Mark Markz helps a woman who is being mugged and gets her home safe. The final column shows Markz at home, flipping through channels on TV. Because Walta sets this up in columns, instead of rows, it feels like we’re watching the same events being repeated. Even though we’re just following Barbalien into one burning building, Walta gives us the sense that these things are just part of Markz’s day-to-day. It might be a different kid or lady, but Markz is always helping, and coming home to a lonely house. Just as the page makes us go “hey, why are we watching this happen again?” we feel Markz’s own irritation at the redundancy of his life. 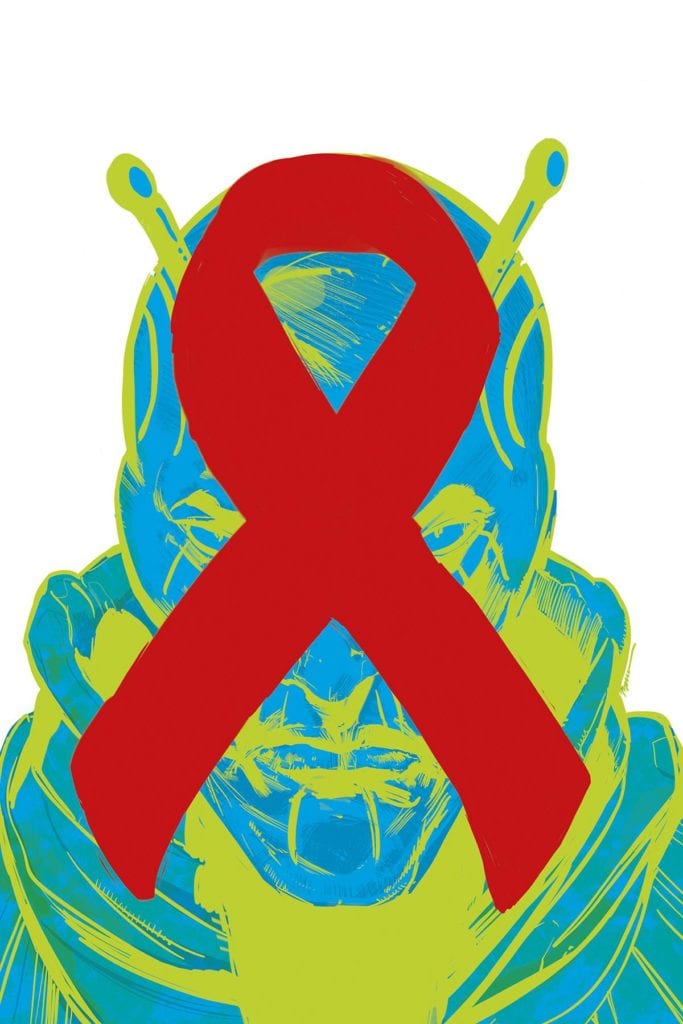 Bellaire doesn’t want us to forget what this issue is really about. Like an AIDS ribbon, we see the color red pop up over and over. The protestors wear it and have it on their signs, Miguel wears red shoes, Barbalien has red skin. It becomes almost a haunting color. A color that represents more than just AIDS, it represents the blood of the gay rights movement. So when Office Mark Markz saves a woman in a red coat, being mugged in front of red graffiti, it’s as though he can’t get these people out of his head. When Markz finally leaves his lonely, blue apartment, he finds an underground club. The colors of his blue loneliness and the blood and sweat of the gay rights movement merge to create a beautiful purple. Markz brings his own pain to the table, and these new people he’s met bring theirs, and together they make something beautiful.

Bidikar’s sound effects have subtle differences to them. This allows the issue to have a uniform feel, while also making sure each sound seems unique. A remote control doesn’t sound like a car screeching to a halt, but the overall style of the lettering remains the same. But Bidikar switches it up when lettering the Martians. Their words, even the sounds they make, are different. It’s interesting that we don’t see Barbalien talk in these scenes. It begs the question, how would Barbalien’s lines be lettered? Instead, we only have Barbalien’s lines on Earth to go by. They’re lettered the same as every other earthling. It again highlights how Markz is stuck between worlds, literally in this case. Markz is neither fully Martian nor fully human, he simply is.