It has been six years since Drew Goddard last directed a film, the cult favorite horror-comedy The Cabin in the Woods. In the meantime, he wrote films such as The Martian and was the creator and executive producer of Netflix’s Daredevil. However, he finally made his comeback to the director’s chair this year, and one can only wonder, was it a worthy one?

Bad Times at the El Royale is the newest film from writer-director Goddard. It is a mystery-thriller about seven strangers who meet at the rundown El Royale hotel in Lake Tahoe, each hoping to bury a secret. Over the course of a night, things get wild, and each person gets one last shot at redemption.

Although it is undoubtedly not going to please everyone, this film has a definite audience that is destined to love it. A direct, but intelligent allegory, the story is captivating from beginning to end.

The narrative structure of the movie is not conventional, showing much love for nonlinear films such as Tarantino’s Pulp Fiction. Fortunately, this film does not feel like it is using this storytelling method as a gimmick. Instead, it is expertly crafted to lend a more considerable amount of suspense and tension to the story.

The mystery is gripping and unpredictable. Even the story itself is unpredictable. The film masterfully uses “red herrings” and other misdirections to make the audience think the story is going one way when, in fact, it is going in the complete opposite direction. With this, the viewer can easily get caught up in the story. The two-and-a-half hour run time flies by.

The tone of the movie is also highly enjoyable. There is, of course, quite a bit of suspense and excitement involved with the thriller elements of the film; however, the movie also contains much of the dark comedy characteristic of Goddard’s previous scripts. Satire, irony, and witty dialogue are all used to add a dash of humor to the film, making the pacing even breezier.

Additionally, the movie’s execution is top-notch. The amount of love that went into making this film was evident. The cinematography and production design are both fantastic. The movie feels almost like a time capsule (in a good way), transporting the audience back in time to a neon-drenched late-1960’s world. There was so much detail in the film’s sets and visuals, both for periodizing the movie and constructing its meaning.

The cast for the film is excellent. Each actor or actress gets his or her own moment to shine. Jeff Bridges delivers one of his best, most nuanced performances in years as Father Daniel Flynn, one of the more prominent characters in the film.

Chris Hemsworth’s performance, on the other hand, is very over-the-top, but equally likable. His delivery is absolutely impeccable, driving the third act completely. Jon Hamm and Cynthia Erivo also give strong and compelling performances.

However, the film’s absolute standout is Lewis Pullman. His role is far more interesting than the premise or trailers would imply, and he is the most compelling character by a long shot. The character falls into the “lovable fool” archetype, and Pullman has the goofy charm required to pull it off.

As a whole, Bad Times at the El Royale is a well-crafted, enjoyable neo-noir film. Some may nitpick the film and not be as satisfied, but the characters, dialogue, story, and execution are solidly-crafted and likable. It was worth the wait between Goddard’s films, and hopefully his next is just as good. 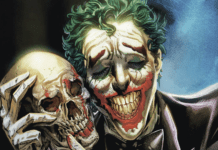