Avengers volume two, “World Tour”, is out this Wednesday, and it’s a fun, thought-provoking read to keep you entertained while waiting for Avengers: Endgame to come out.

“World Tour” opens with a one-shot story, a flashback to One Million B.C. Aaron, Pichelli, and company reveal the origin of the woolly mammoth-riding Ghost Rider first seen in Marvel Legacy #1. It’s a story with action and heart, and it’s a strong entrance to this collection. Readers immediately know that this is a grand-scale Avengers story. The tone is set.

The succeeding issues all tell a connecting story, but they also feel episodic. They can each be enjoyed on their own, which is great if you don’t have the time to sit down and read the whole paperback at once. The stories also strike a balance between light, fun superheroing and more thought-provoking, political storytelling. 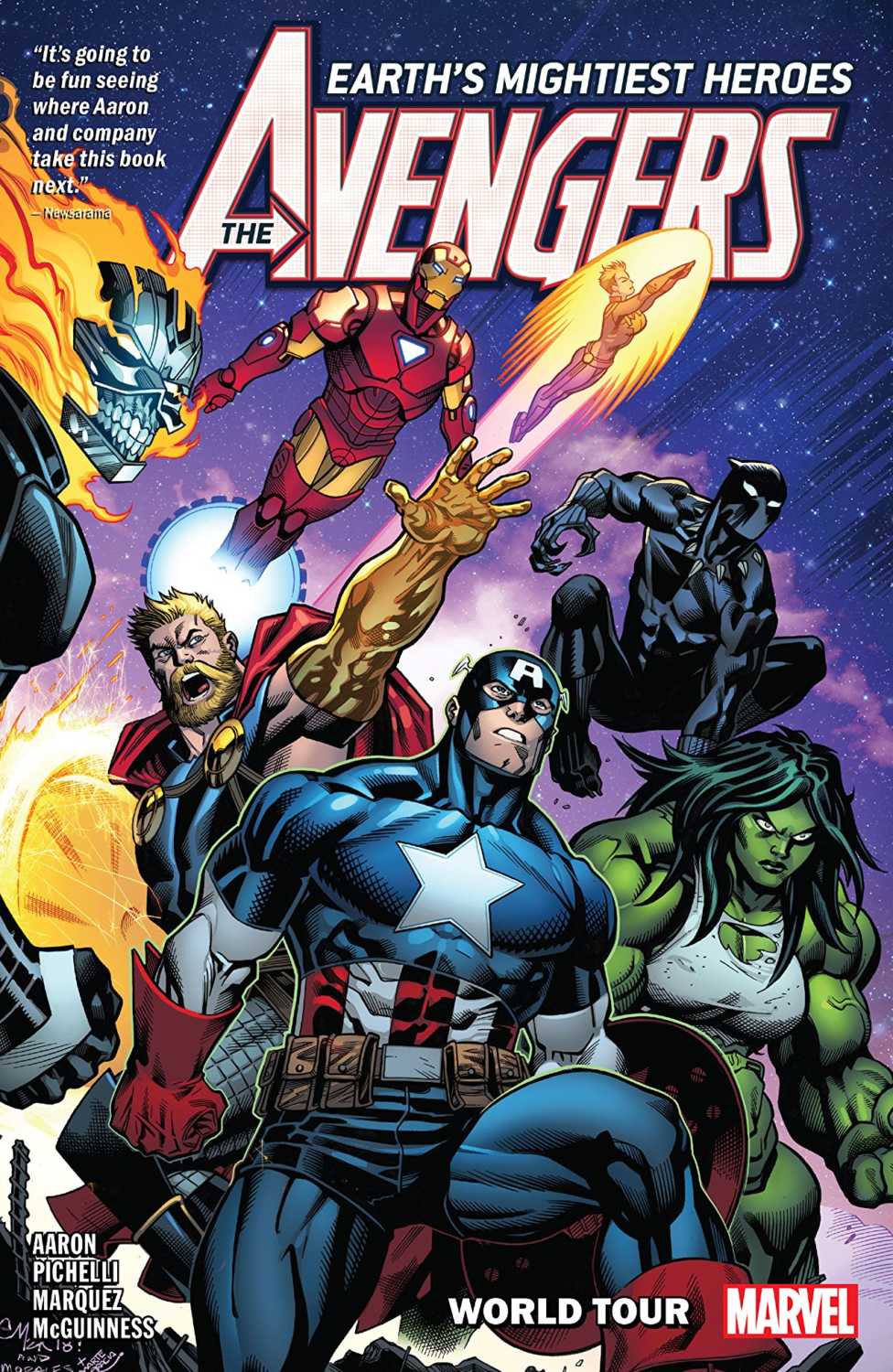 “Light, fun superheroing” is the Avengers comic’s bread and butter. It’s what puts butts in the seats (or whatever the appropriate expression for comics would be). This team has real chemistry, both in and out of action. Whether it’s seeing Captain America mentor Ghost Rider, or watching Thor’s courtship of She-Hulk, readers will enjoy how this cast interacts. Aaron also has a few issues where he jumps around, bringing the audience on a tour of Avengers Mountain, or following Black Panther as he recruits various agents. It sounds basic, but “fun” really is the best way to describe these stories, and sometimes that’s all a superhero comic needs to be.

It’s not all fun, however. There’s also a lot of poignant, smart commentary here to sink your teeth into. First off, the Avengers are at odds with the United States government. Anytime you have tension between Captain America and America itself, it makes for a good story. Steve Rogers wears the flag, but he represents an ideal, not a government. Watching him tell the Pentagon that he doesn’t work for them is so satisfying. Black Panther also has some strong dialogue in the final issue here, speaking with international leaders and discussing how they need to come together for the betterment of the world. There are many lessons that readers can glean throughout “World Tour”.

Perhaps the most powerful and fulfilling subplot, though, is Namor’s. In fact, issue nine may be this collection’s high point. The Sub-Mariner is yet again sick and tired of how the surface world treats the sea. And, honestly, who can blame him? The Prince of Atlantis is such a compelling antagonist here because you can so vividly see where he’s coming from, especially in this issue’s closing pages where Aaron shows the pain that Namor is dealing with.

Side note: Justin Ponsor’s colors on this issue are magnificent. He utilizes blues heavily, obviously, because it takes place mostly underwater, but it creates an atmosphere and tone that’s unlike anything else in this collection.

If you’re jonesing for a fix of Earth’s Mightiest Heroes, pick up Avengers: World Tour this Wednesday.

Review - AVENGERS: WORLD TOURAvengers volume two, "World Tour", is out this Wednesday, and it's a fun, thought-provoking read to keep you entertained while waiting for Avengers: Endgame to come out. The paperback collects issues #7-12 of the series written by Jason Aaron. Artists include Sara Pichelli, Elisabetta D'Amico, Justin...