Court is now in session, the honourable Mr. Justice Hardiman presiding. All parties to the matter are asked to step forward. In case, it wasn’t clear I love courtroom dramas and Capcom’s Ace Attorney or Gyakuten Saiban (Turnabout Trial) as it’s known in Japan is one of my favourite game series. A cross between the old point and click adventure games and Japanese visual novels with a bizarre sense of humour, the series stars defence attorney: Phoenix Wright, the Dean Strang and Jerry Butin of his day, as he defends his clients from being falsely accused of murder. Players are tasked with investigating crime scenes to collect evidence and then use that evidence to prove your client’s innocence and discover the real killer at trial. Luckily for Phoenix, most of his clients are innocent and are merely suffering from an old-fashioned case of being in the wrong place at the wrong time. The series’ trademark humour and stunning sprite visuals has made it a darling among gamers and has been the subject spanned a substantial body of tie-in material from manga and musicals to a live-action film in 2012 and a crossover with Professor Layton. Finally, fifteen years after the series first premiered on the Gameboy Advance, Phoenix has gotten his very own anime, but how does it compare to the original? 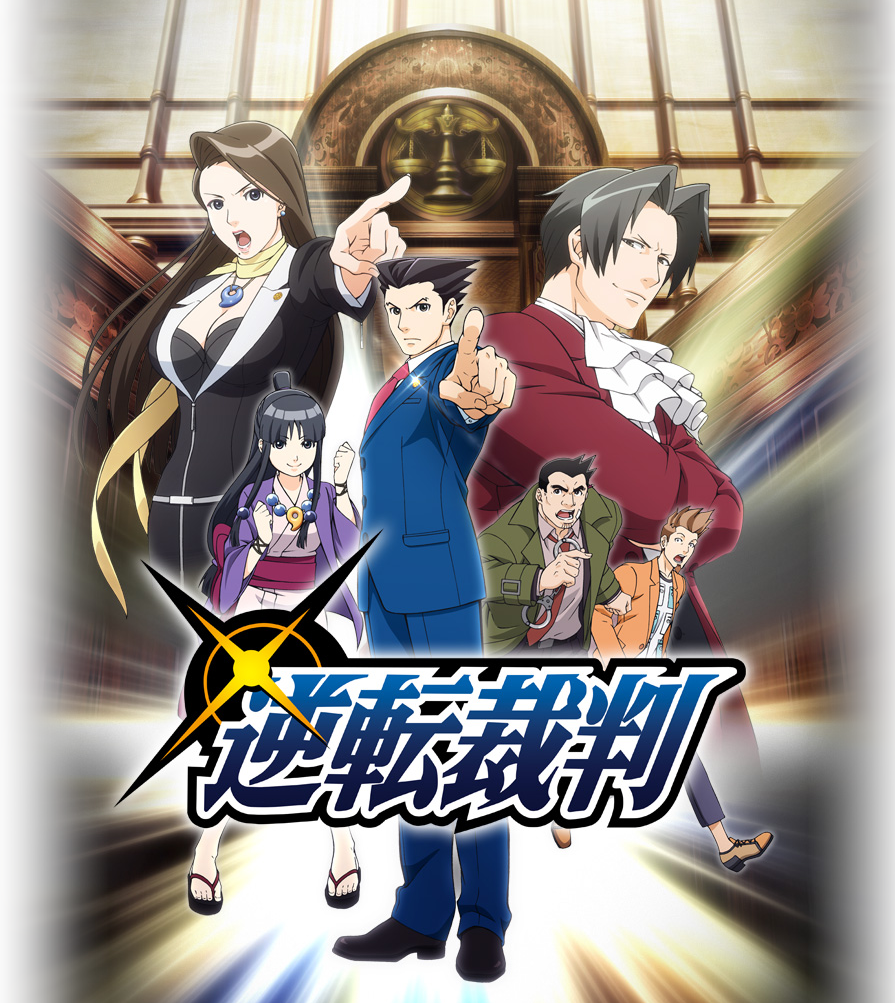 The series’ debut outing is a point for point remake of the first game’s tutorial case and sees Phoenix defend his best-friend; Larry Butz (get used to terrible puns) after he is framed by an unscrupulous newspaper salesmen. If you think I’ve spoiled anything, let me say that the stitch up, and the identity of the true culprit, is revealed in the opening 2 minutes of the episode and therein lies a problem that not only this episode has, but potentially the series as a whole. Being a murder-mystery show, part of the fun is trying to work out the identity and motives of the real killer before it’s revealed to you and that is taken away from the viewer in a lot of Phoenix’s cases. Later cases towards the end of the game tend not to reveal the who’s, how’s and why’s until the player figures it out, but until that point player’s were still in the driving seat and therefore,  had control over whether their client was found guilty or not. Presenting the right evidence to contradict a piece of testimony and turn the case around was satisfying because you figure it out yourself, or potentially had turned to Gamefaqs. This is particularly important seeing as Phoenix isn’t a very good lawyer, but rather an every-man, often presented as a complete chancer who is way out of his depth. Much of the humour comes from Phoenix’s over-reactions to his own failings or his inability to remain calm when under pressure. Crime dramas that feature genius detectives like Sherlock Holmes can get away with walking you through the mystery because their leads are shown to think on a completely different level to us, but Phoenix lacks that edge. There is no satisfaction to seeing the  case play out in court because we already know everything going in and because we are no longer in the driving seat as players, then we don’t even get the joy of catching the witness out on their lies either. This is always a problem that game adaptions face, but the nature of the Ace Attorney series makes this discordance between the game and anime much more apparent. Were the series to feature more original material than what this episode and the next episode preview seem to suggest then a lot of those problems could be resolved, but a straight adaptation is always going to struggle. The live-action movie was able to get around this by being more character focused and being a bit looser with how it adapted the cases. All that being said, however, the characters remain endearing and fun to learn about, with series’ stallworths Prosecutor Payne, and the Judge all retaining their eccentric personalities. Phoenix maintains his “so nervous it’s adorable” charm from the games and his inherent desire to help people makes him an incredibly likable lead.

The animation is satisfactory, accurately depicting the characters and there is nothing that would stand out as being particularly shoddy. It never delves into Dragon Ball Super levels of mediocrity, but neither does it shine like a Madhouse production. In the transition from sprite to screen, something was lost. The dynamism and eccentricity that made the characters pop in the game isn’t present. Seeing Phoenix panic or triumphantly shout “Objection” doesn’t have as near as much of an impact as it’s sprite-based counterparts. The series’ does give a nice presentation of Phoenix’s reasoning as he slowly putting the puzzle together and highlights evidence/testimony that is will be important later.  There is a vague Sherlock mind-palace element to this and it’s something I look forward to seeing them utilise more in the future. The music as always is a memorable part of the Ace Attorney series and the anime provides charming orchestral renditions of your favourite Midi tunes. If you don’t find yourself humming the “Objection” theme afterwards then there is no hope for you.

The inaugural outing for Wright and Co. Law Offices provides an interesting opening argument to endear Ace Attorney to a new audience, but those already familiar with the games will find themselves with little original material to gravitate towards. While there is nothing objectionable about the series per se, it is going to need to up it’s game if it going to hold people’s attention long term. Until then judgment is reserved and we shall reconvene at this time next week. Court is adjourned.